The chance you take eating out. ,

From where did you get the chicken?

Foodtown in Hastings. I know I’m taking my chances there because it’s a small store and they don’t have major turnover, but I was in a hurry and didn’t have time to go to Costco or Stew. Still, this one was way worse than their average, which is not a terribly high bar!

Just returned from tip to Oceano Ave ,Jessup Md, to buy fresh seafood from the supplier of restaurants and grocery store in DC metro area. They are only open 2:00AM-9:00AM, so had to wake up early and get there. They are not open to the public unless ----

Bought my seafood from them 2 bags of Texas Supreme ( 10 pounds ) shrimp 16-20 count, ( I still have pink patagonia shrimp and huge prawns for paella in freezer), Sashimi quality Tuna Loin 3 .20 pound but gave 1.5 pound away already as I am going away this evening and returning late tomorrow , so will have this for Sashimi for lunch and dinner with s/s and wasabi or eat raw. It is very fresh. The only place I found it as fresh is in the market in Amsterdam which I frequented for fresh tuna before we sold our condo there at the Rembrandt Plaza open market.

2 pounds of fresh dry sea scallops ( will use one 1 pound tomorrow night if I am not too tired arriving home or lunch monday, 2 boxes of Duck Trap’s smoked rainbow trout ( 6 pounds), and Duck Trap’s Pastrami Spurce Poiint salmon for breakfast the next week. )

Picture is for 1.6 pounds of Tuna which I will just eat sashimi style before I leave today ( share with my son and 2 pomeranians) 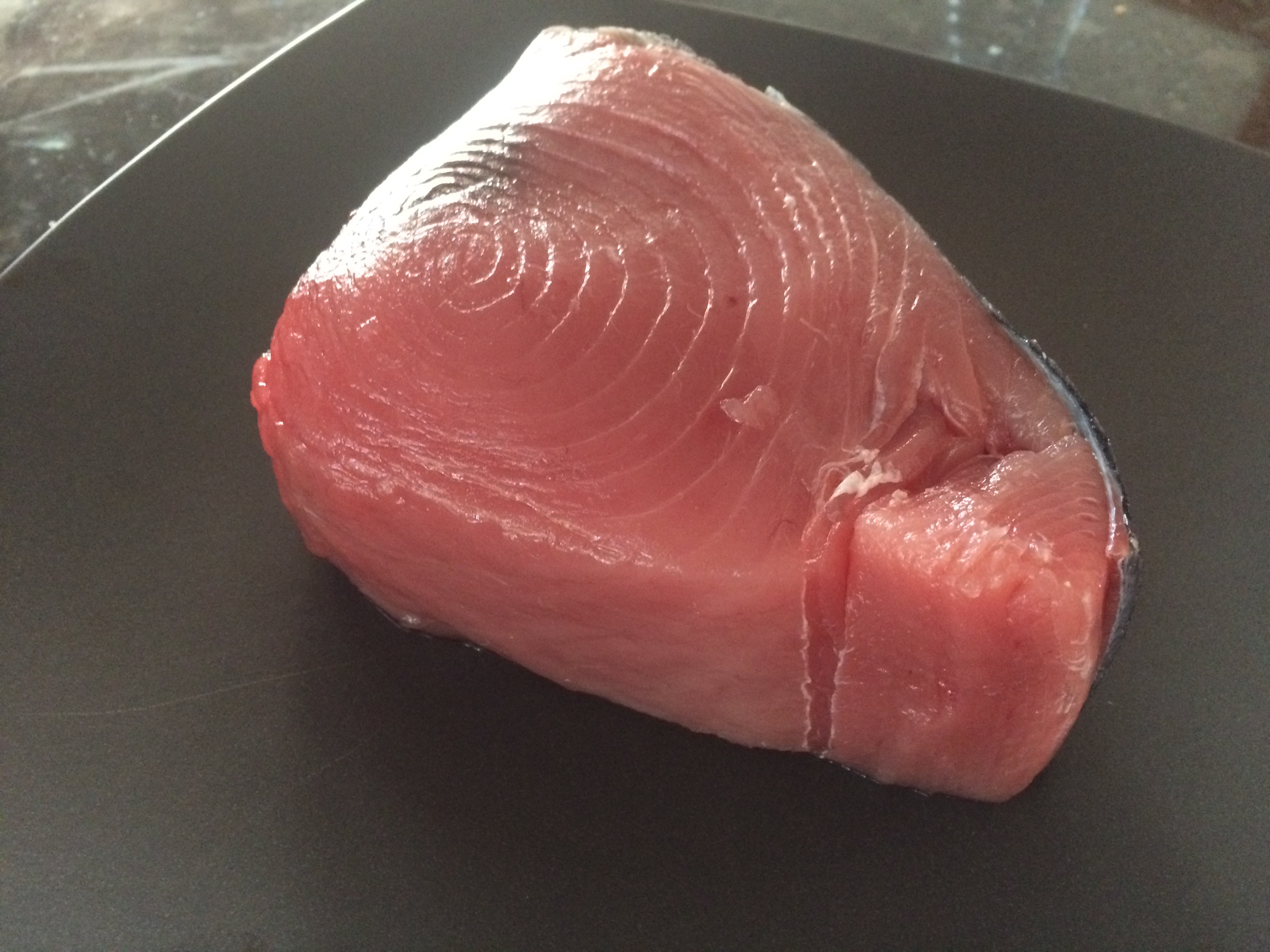 They’re saying it’s due to the horrible drought last year, so the crops are something like 40% less yield for both CA and mexico but demand has been surging. I actually buy them from the nyc street fruit n veg carts for $1 or $1.25 , actually kind of surprised those guys are still selling them.

If you can get to Deciccos in Ardsley give their chickens a try. The last one I got was incredibly moist and delicious and yielded so much meat that I got four meals out of it!

please give Linda a giant hug from me!! xoxo

leftovers last night. BF ate the rest of my ramen from a dinner out, and i made myself tacos from the leftover pork belly, cabbage, cukes, had-to-be-eaten sour cream, loroco cheese, and big splotches of habanero sauce. quick, down and dirty - had to start packing for our trip today! Leaving in a few hours for Malaga, Antequera, Sevilla, Cordoba, Granada, and then back to Malaga for the return. Anniversary trip for me and the BF - 15 years. Excited as hell! Tapas and sherry, here I come…

I’ll be checking in periodically, enjoy your dinners, everyone! 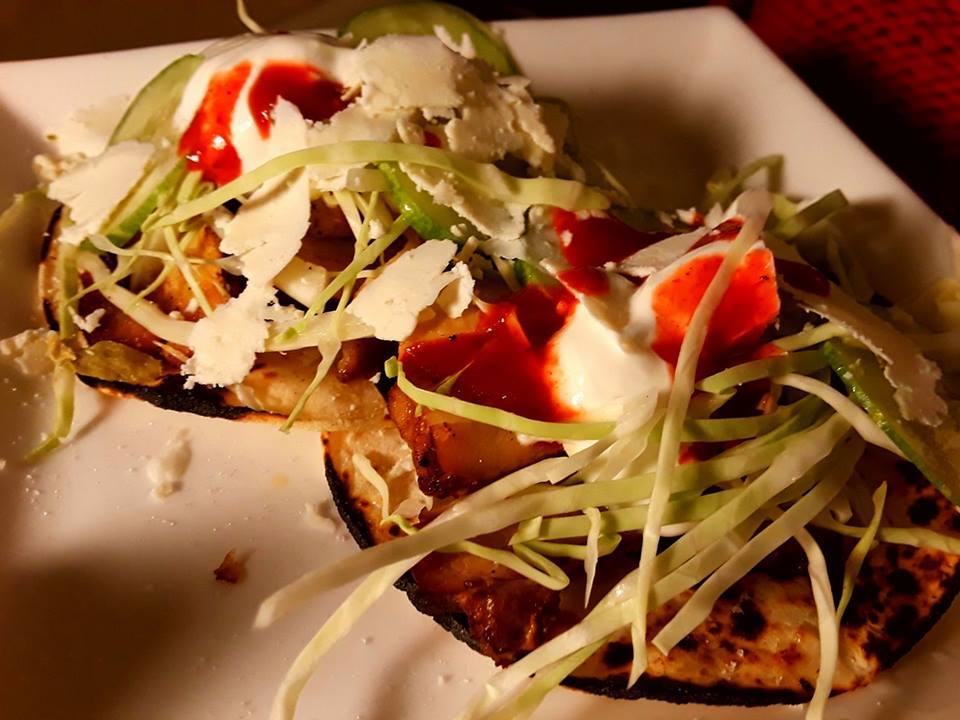 Their butcher told me that the Deciccos brand “natural” birds are exactly the same as the Bell and Evans birds and not to waste the extra $$$ on the Bell and Evans. I could not tell the difference. Just keep in mind that in addition to the Bell and Evans and Deciccos natural, they also make a store brand “regular” rotisserie for a few dollars less.
EDIT: I like the Decicco natural chickens because they are not injected with the stuff that makes the chickens rubbery and mushy … I am not a fan of Costco chickens for that reason, they are too processed for my tastes, these are way better IMO. 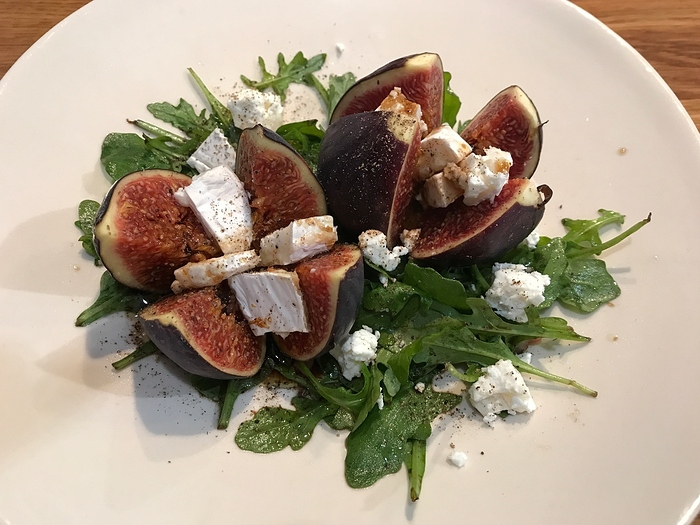 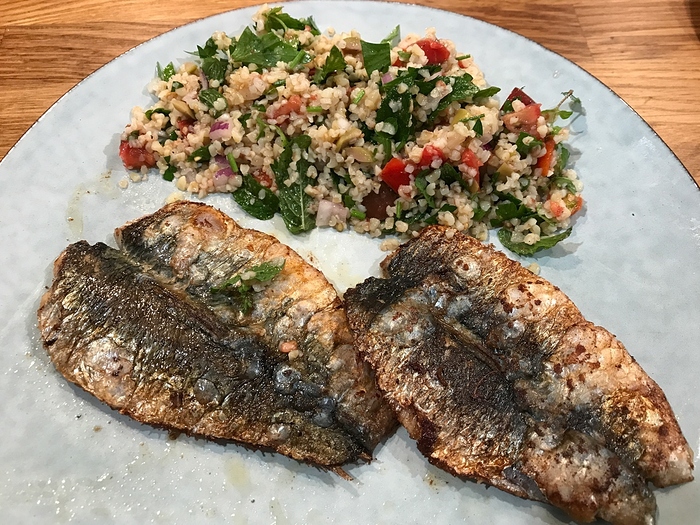 We had the worst rotisserie chicken I’ve ever had tonight - under seasoned and overcooked to the point of choking on the dry white meat. And to add insult to injury, it was cold. Blech. The cats ate some of it but even they didn’t want much of the breast.

When the family Hoovers won’t eat it? You know it sucks.

Sorry it was so bad. I’m always wary of the roasted chickens in my local stupidmarket, but I’ve lucked out so far when I stop for one to get dinner and the makings of sandwiches for a couple of days at work.

Leaving in a few hours for Malaga, Antequera, Sevilla, Cordoba, Granada, and then back to Malaga for the return. Anniversary trip for me and the BF - 15 years. Excited as hell! Tapas and sherry, here I come…

Happy Anniversary and have a faBOO trip! We’ll want to hear all about it!

A nice day in southern NH with some antiquing. Dinner was a Mom Meal - Pork & Apple Cider Stew with Sweet Potatoes. I make this differently every time.

Some bacon was chopped and browned, adding some minced garlic towards the end. Removed from the stockpot and set aside.

A 3 lb. pork shoulder roast was cut into cubes, tossed with flour, salt, pepper, and dried thyme and rosemary and browned in batches in the bacon fat (I had to add some olive oil for the second batch). Removed from the stockpot.

Chopped onions added and sauteed, then several Tbsp. of cognac was added. Two cups of unpasteurized apple cider and one cup of pork stock (I used Penzeys pork base) added and stirred while it was brought to a low boil to pull up the fond. Pork added back in, stirred together, and pot covered on a simmer for about 45 minutes or so.

Then I added two large peeled and cubed sweet potatoes along with the set-aside bacon/minced garlic, and continued cooking for another 40-45 minutes until the sweet potatoes were soft.

I ended up mashing some chunks of sweet potato and served the pork over top. There was broccoli alongside, as well as wine.

I think Mom will like it for one of her freezer meals.

I’ve been shocked at the pretty good quality of the chickens and turkey breast rotisserie at my local Kroger, better than I’ve ever bought at Whole Foods. My youngest cat is the “is this edible” meter. She growled at the TJs salmon bacon which I found to be awful.

Long training day in 90F weather and I just needed something green and cold last night. I discovered a pork tenderloin in the freezer and popped it in the circulator. Sliced and diced, tossed on a bed of butter lettuce with 3 year crunchy crystal goida, blue cheese, bacon and a champagne olive oil vinaigrette. 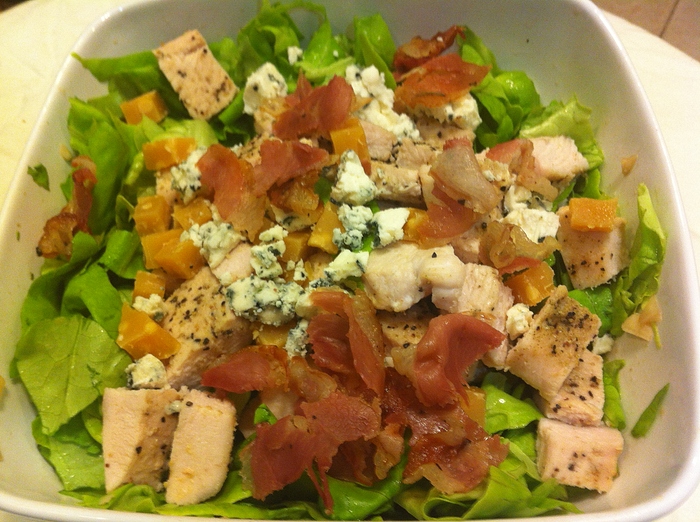 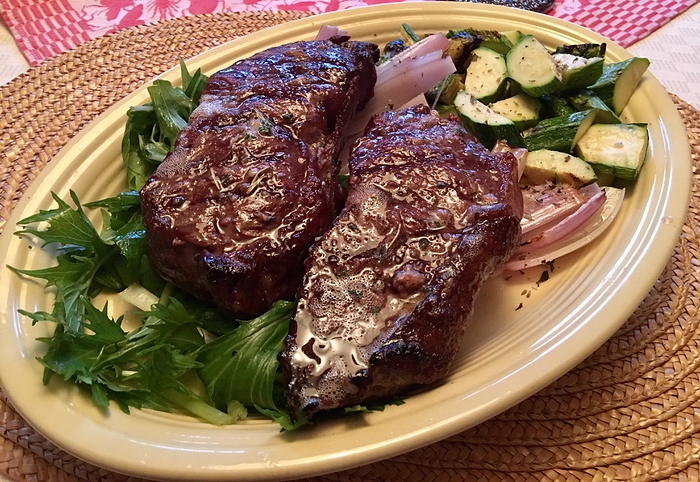 Thanks to a Thermapen recommendation here on Hungry Onion, finally perfected reverse searing on the grill. Sage and hickory cold-smoked strip steaks finished with marrow butter. (The magic of cold smoking and the marrow butter were courtesy of our local butcher.)

There’s more: While cooking these I had to face down one of the bobcats that have been ranging in our yard. He or she kept a good distance. Whew. An exciting meal in more ways than one!

The universe has spoken, and it recommends DH slow down. In spite of every available electronic reminder known to mankind, DH managed to mix up the dates for the annual BBQ for which he does the cooking.
We now have six full racks of spare ribs. Last night we barbeque grilled 2 racks, both were dry rubbed one was sauced. The un sauced were better IMO. I prefer ribs grilled as opposed to smoked, because I like some resistance and chew, I’m not a fall off the bone fan. Today however, our neighbor is smoking 2 of the racks, and two went into the freezer. Ribs will be what’s for dinner last night, tonight, tomorrow night … 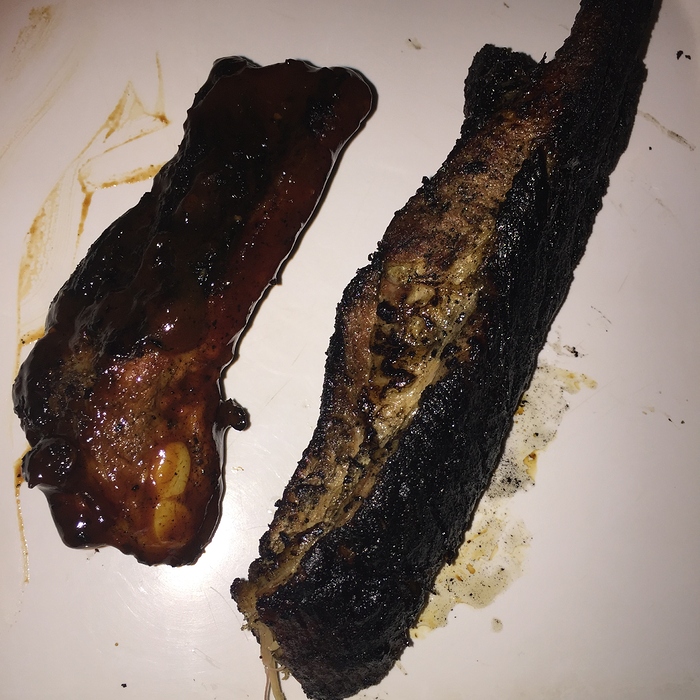 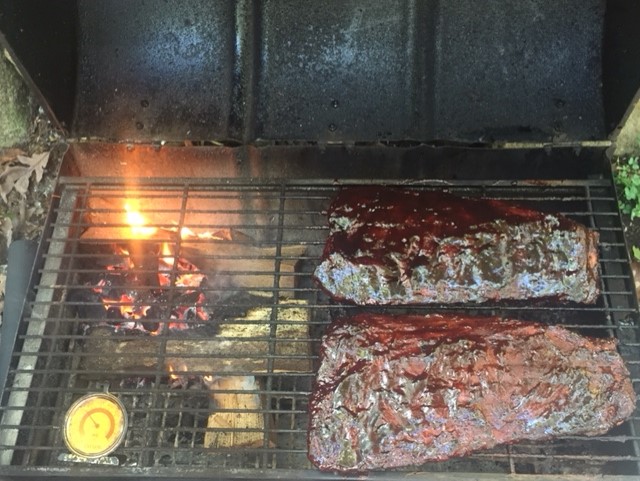 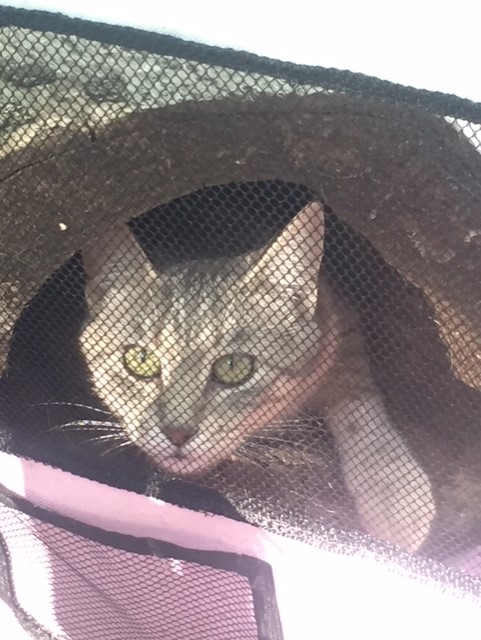