What makes Altoona-Style Pizza so Unique?

It’s unique in that it may be the only pizza I have absolutely no desire to try.

I’m from Pittsburgh, and I haven’t heard of this. I’m not a fan of green bell peppers and yellow cheese on pizza, so this probably is not something I’d try…

Although that sounds pretty bad, a few miles away in Indiana, PA I had some of the best pizza I ever tasted back in the '60s.

I have to drive through Pennsylvania to get to Ohio where my dear mother lives. I’ve seen signs for Altoona but have never stopped in there. Remember driving rural backroads out of boredom from being on the turnpike and saw a restaurant with a sign that said “Pretty good food and really cold beer” - that’s as close as I got to be interested eating in your state.

“And yet, for all the blowback it received, Altoona pizza has plenty of die-hard fans. If a fire couldn’t stop it, Reddit and Twitter won’t stand a chance.

According to Uncovering PA, Altoona pizza tastes exactly how you’d expect it to based on the ingredients, so if that combo sounds appealing to you, you’ll probably be a fan.”

It doesn’t look/sound appealing to me, but there you have it. The masses have spoken.

I’m so sick of seeing the burnt pizza craze . Yeah los Angeles I’m talking to you . 90 percent look like hell . If I put cheddar cheese on a deer steak . Is it pizza ?

If I put cheddar cheese on a deer steak . Is it pizza ?

Anything with American cheese is bad news

I like to put that death cheese on my tiny burgers. It’s well you know.

I use them to kill ants.

That’s a shame. There’s very good food to be had in PA. The best thing Altoona’s got going for it is a Popeye’s. 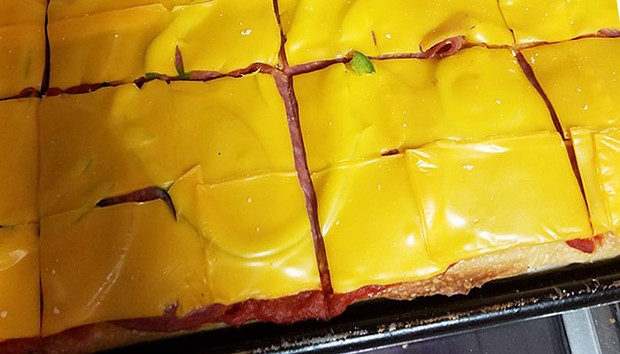 Pennsylvania is home to a lot of obscure and unique styles of pizza. Philadelphia has tomato pie, Northeastern Pa. has Old Forge Pizza, and Beaver County has Ohio Valley Pizza. Now, meet one of the most obscure pizza styles ever documented: Altoona...

(You’d get even odds from my bookie.)

As a NYer, I wish people would come up with another word for these alternative “pizzas”.
I’m sure some in Naples have strong opinions on this as well.

Dennis Lee covered this for The Takeout, as well: 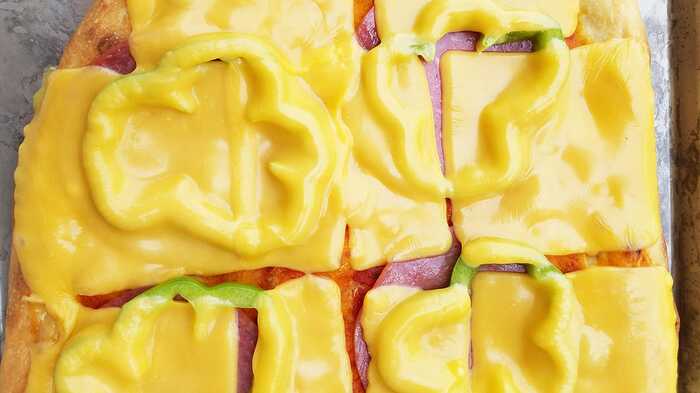 We did it. We tried making Altoona Hotel Pizza.

Is this Pennsylvania concoction with tomato sauce, salami, green bell pepper, and American cheese worth making at home? Let's find out.

I am going to have to come out and say that I’m not really sure this qualifies as pizza. Though it sits on pizza crust, it feels more like an open-faced sandwich with pizza sauce on it, like a hot hoagie or something. (My hoagie experience is limited, so I’m sure one of you will angrily correct me about some part of this comparison.) If someone declares loudly that, say, their toes are pizza, are their toes actually pizza? Is this what Altoona is doing? Just calling a concoction pizza because there’s sauce and cheese on dough? And are they in fact right to do so?

My Italian godfather is Italian, raised in Venice. Immigrated to Canada in the 1950s. He only likes Italian food and steak. He will eat French food and Greek food if Italian food is not available. He isn’t interested in lther food. That’s his POV, and I work with it.

I know many people in Naples, and assorted Italians from everywhere else would have an opinion about Altoona pizza as well as Hawaiian pizza.

Altoona Pizza is a type of pizza. Pizza is a very big family. Heros with pizza sauce, calzones, panzos and pizza egg rolls are its relatives.

Stay away if it grosses you out.

I’m ok with calling it pizza, also ok with calling it some late night drunken/stoned creation when you’re 21, broke and have only 4 ingredients in your fridge. I don’t think it’s a stretch to say this has been made with sliced bread instead of crust. But hell if people like it, doesn’t bother me. I don’t know where Altoona is and this isn’t putting it on the map for me. At least it’s not an all tuna pizza.