What food is worth the drive even if it's not in New Jersey? (neighboring states only please)

I’ve got two places that are TOTALLY worth the drive. One you can only get during lent:

1 - Ferri’s Pizza - Moscow, PA - This is an Italian Restaurant, a coal mining museum, and a ladies store all in one.

I’m near Toms River. This place is 2 hours and 50 minutes ONE WAY for me. If I pick up my friend it adds another 10 minutes.

I would NOT go here for the regular pizza. I tried one once and it was kind of like those Ellio’s pizza you get in the frozen section, but thicker. I didn’t really care for the normal pizza.

However, during lent they make a potato pizza that is amazing. It’s basically a pierogie on top of a pizza. I usually eat one tray there and take a few to go home and bring to friends or relatives. Everyone I’ve given it to loves it. 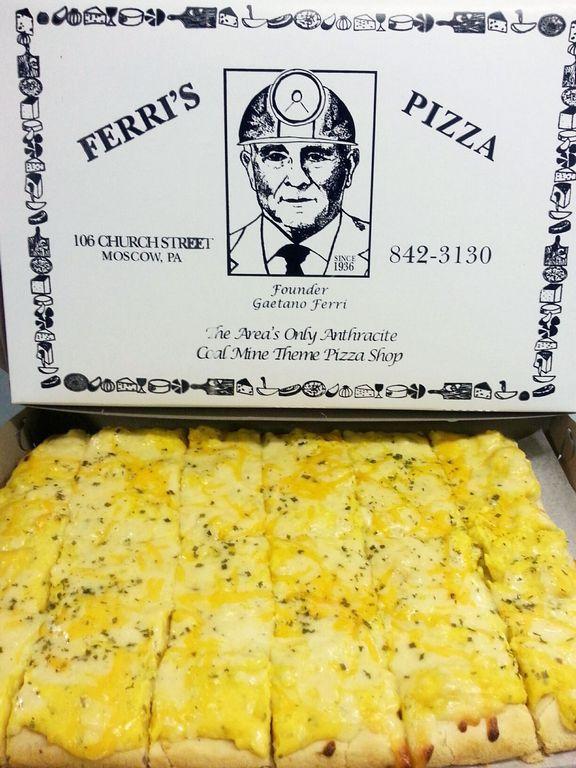 That’s a full tray in the picture. I think 12 slices will run you $20.50. They also have half trays. Three kinds of onions, cheese, spices, and obviously potato.

This little old lady used to live next door. She’d shuffle her feet across the parking lot with a bowl of “mashed batatas” and tell them to make it on top of a pizza crust. One day they took a taste and liked it so much they decided to make their own version.

When you walk in you’re greeted by a bunch of coal mining stuff. A lot of it I believe he salvaged himself. 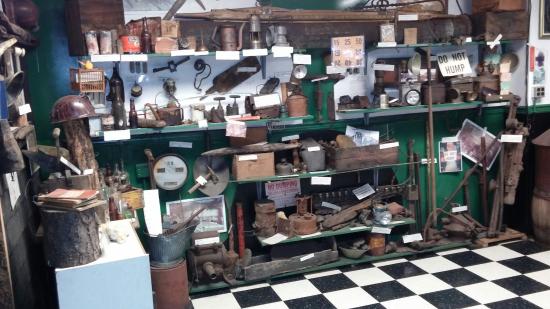 After that you’ll run into a small section selling purses and some other ladies stuff. After that the dining room. 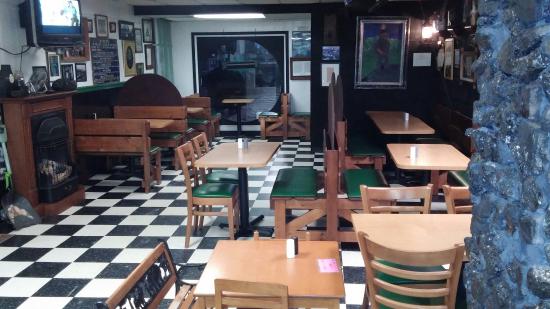 While you eat they usually play a coal mining video and/or some 80’s movies.

If you ever meet the owner he’s quite the character. Nice guy, though. I believe I saw his daughter once (beautiful). One time he overhead me asking if there’s anything I should do or see before I leave… I mean I did drive roughly 3 hours to get there. I then got a 20 minute long discussion on why city slickers come out to the middle of nowhere looking for entertainment. I said we come because of his potato pizza. I just figure there also might have been something I should see before I went back home… like maybe the world’s largest fork or something… or maybe just a beautiful place to look at… or maybe a big market with foods to buy or an indoor fleamarket.

I’m not sure I think it is cash only, but they have an ATM there. Don’t quote me on that. Oh, and if you go before lent? The week before I believe he makes a Reuben Pizza and also a hot dog pizza.

This place is about the same distance as the previous place. I’ve been eating this “pitza” since the 80’s. My Grandmother had a friend where she worked that grew up in Hazleton. She would bring back this cold pitza. Eventually they weren’t working there any more and my Aunt and Uncle would take the trip up every year or two. They’d bring back a trunk full because everyone in the family wanted some. Now my Aunt/Uncle are older and I make the trip every year. I usually buy about 20 boxes. I believe it’s 12 slices for $5.

One year my Aunt/Uncle took a drove up and a big snow storm hit. They were stuck in a hotel in Hazelton for a few days and since everything was closed all they had was a trunk full of pitza to eat. Normally it’s eaten cold, but to get some variety they would put it by the heater in the hotel room. 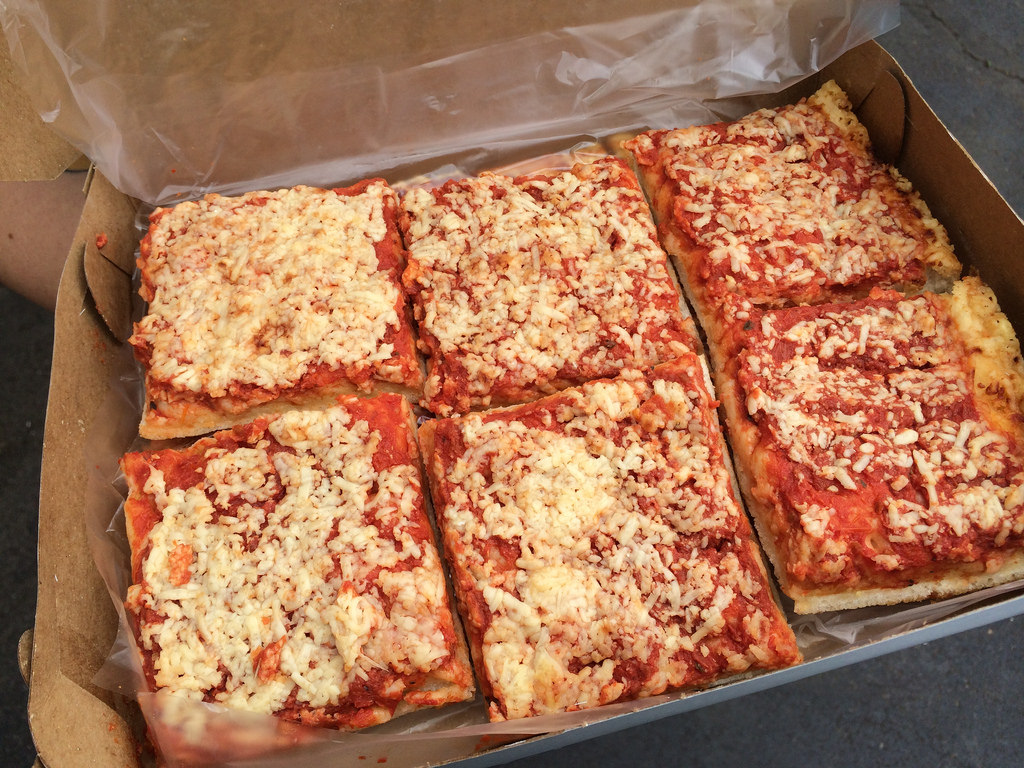 You can get them warm at the bar, but skip that. Go to the bakery and get them. They are shelf stable, so you don’t have to refridgerate them if you don’t want. In fact, if you let them sit a day or two they gain more flavor, but I can’t wait that long. I devour a box or two on the ride home. I tried putting them in the trunk once as opposed to the back seat, but it didn’t work. I pulled over and started eating.

There’s also a brand of iced tea I usually stop for called Farmer’s. Only sold in the Hazleton area.

There’s other places that make a similar pitza, but I’ve only tried Longo’s. There’s Carmen’s also.

Oh, warning the bakery is closed on Sunday I believe. You can also find these pitza sold in convenience stores and gas station type stores.

I only said two places above, but I’m throwing in a third one. Again, the same distance as the above two. Tony’s Lunch used to be open for lunch. The town was a coal mining town, but a lot of that business went away, so Tony’s only opens up at 8PM until pretty late… just when people are getting out of bars and what not.

When you get into Girardville, it’s some tiny little town, very dark at night, doesn’t look like anything to do. They serve hamburgers and cheeseburgers, if you want topped with marshmallow fluff and Screamer sauce. I actually don’t like their hamburgers much… as in I would not eat one by itself. I just didn’t like how they were cooked, but put the fluff on top and the Screamer sauce and that’s a different story.

Normally I don’t like marshmallow fluff, but something about the two flavors complements each other very well. I’m going to get this on a cheesesteak next time. I would recommend extra screamer sauce. They do NOT let you get sauce on the side, because they don’t want to run the risk of someone taking it home and figuring out the recipe. 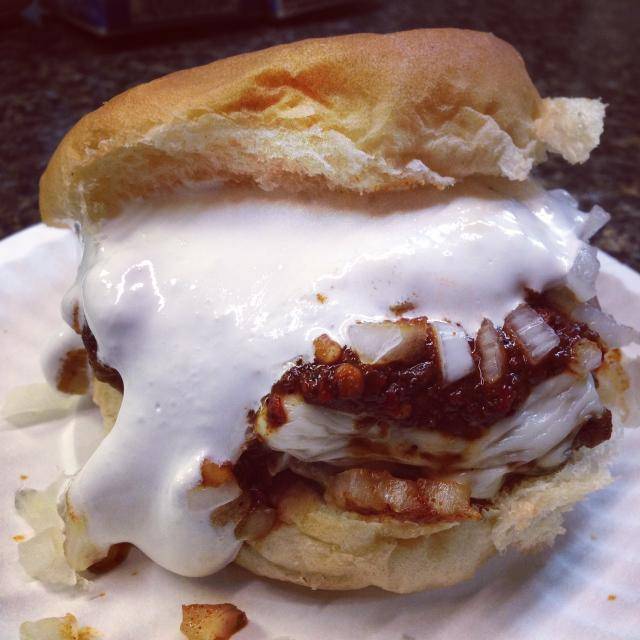 By the way, please include ethnic markets and things like that if they’re in our bordering states. I went to this indoor farmers market type place in Delaware that had a lot of different countries foods… asian, indian, spanish, etc. Pretty big place and super crowded. I also like going to some of those indoor flea markets in Pennsylvania. Counters of locally made meats and cheeses. One guy was selling pickles, which had some hawaiian variety that had pineapple and other stuff in there. They were delicious.

And if anyone is wondering I’m going to Ferri’s Pizza this Saturday AND next Saturday!

PS - If anyone is interested in three really neat sight seeing things in Pennsylvania, one is right over the border, PM me and I’ll let you know. As this is a food forum I thought we should keep the post all food.

While my list is certainly going to be much shorter than yours, there is nothing I enjoy more than going into Manhattan for a good steak. There are several excellent steakhouses in Manhattan my current favorite being Empire Steakhouse E. 50th location.

I take the train and it’s not a dish but anytime I head to The Smith in NYC for a drink and their raw bar, I take home a container of their made in house sweet and hot pickles. They charge me $5. for a decent pound size. Sliced super thin and pickled in a magic brine. Great on sandwiches, chopped into cold salads and dressings or as is. Worth the trip! 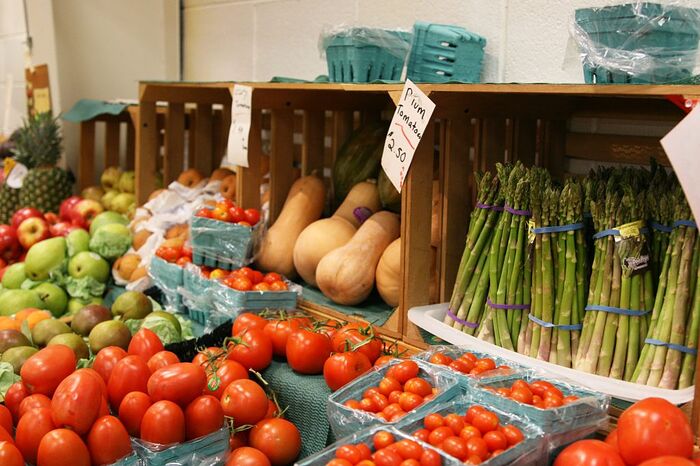 The Bristol Amish Market is a great shopping destination for Amish furniture, crafts, outdoor structures and a great place for Amish food!

There are a bunch of really good vendors, but the best is Bristol BBQ. Check out the pic on their menu page @NotJrvedivici and tell me you don’t want some of those ribs and Kielbasa… And the fact that it is right on the way to Parx has nothing to do with it

One of my favorite NYC treats is 212 Steakhouse. One of the 9 restaurants in the US where you can get real Kobe beef. they charge by the ounce, but you really don’t want to eat more than four or six ounces anyway. I always get the sampler with ribeye, strip, and tenderloin and find that sharing the nine ounces is plenty. Add in some baked sweet potatoes with manchego and a chocolate supreme and it’s a great night.

I love this thread. I’d love to steal it for NYCT!

I will have you arrested!!!

Reading Terminal Market in Philadelphia is lots of fun, imo–plenty of Amish farmers, scrapple, etc. I was just saying it’s getting to be time for a Philly trip, as I NEED (NEED!) to get to Zahav.

And of course in NYC there’s the Union Square Greenmarket…that’s always a fun wander, imo!

Deninos pizza or Joe and Pats pizza in Staten Island.

Pastosa mozz from the forest ave location on SI

@Metsfan86 I’m curious to know if you think Pastosa in Cranford is as good… haven’t been to SI but I think they’ve got great stuff!

Full disclosure my buddy is one of the owners of the Crawford one. But I love it there too. Trust me it’s well run clean and food is awesome. I try not to shill for him on here though, not that he needs it.

Pastosa in Manalapan is very good. Right on Union Hill Rd. & if you look into Ronybrook Farms stand at the Union Square Market - my cousin runs it.

PA Places: Primanti Bros in Pittsburgh has some outstanding sandwiches; At the Leesport Farmers Market on Wednesdays in Leesport, PA, there’s a fish place that makes the best fish sandwiches, they come on white bread or whole wheat bread; I love Victors Café in Philly & the Greek place on South St - South Street Souvlaki is good too.

I do NOT like Parx. I went there when they first opened. You figure with all the money they spent building the place it would be all new and shiny and what not. The parking lot had a pot hole the size of the Grand Canyon. Looking back though it really was maybe 8 inches deep and even wider.

I’ve never been Reading Market or the place in NYC. Always mean to go some day. Zahav looks nice.

Vincent’s Clam Bar in Little Italy, NYC. They serve the best steamed calamari in spicy tomato sauce. The calamari is like butter! I can’t find anything anywhere that comes close (except my own kitchen). When I do find it on menus, the calamari is sauteed. Just not the same. I was hopeful for Cuzin’s in Marlboro but they only have steamed scungilli.

I just did a review on Cuzin’s I went there last night, for steak though!

Since the OP mentioned pizza and a 3 hour drive, why not add a nice day trip to New Haven, CT for what some people claim is the best pizza in the country. Both Frank Pepe’s and Sally’s are practically next door to each other. Enjoy a large clam pie with bacon and any flavor of Foxon Park soda. Afterwards, stop by Lucibello’s for a few cannoli’s and you can thank me later. If you are feeling adventurous you can also stop in at the birthplace of the hamburger, Louis’ Lunch. Just remember not to ask for ketchup.

@bgut1 that used to be my favorite road trip when I was a kid. Thanks for the memories!