What do you like? French Fries or Alternative Fried Foods?

Culvers does good ones. Theyre made to order, so hot and fresh, and run a good chance of having a strip of screaming hot real onion fall across your chin.

Never seen a Culvers. I do them at home with either a tempura or beer/flour/cornmeal batter and luv them.

Sorry, dont know where younare. Culvers is Wisconsin based but all across the southeast now.

Culver’s also has locations as far north as Michigan. I tried it near Detroit. Good place to eat. 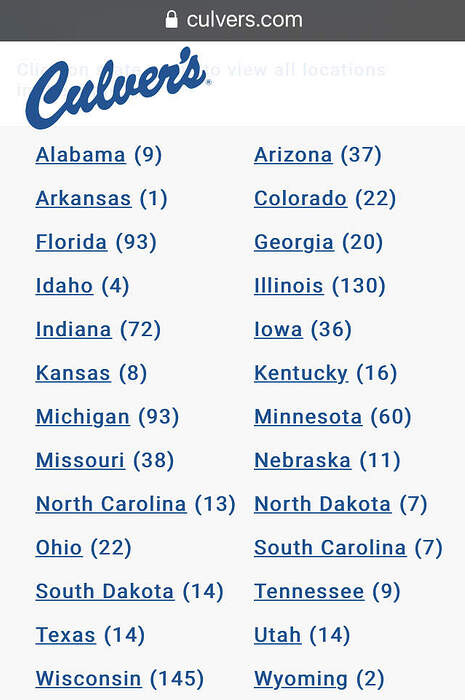 Culver’s opened here recently. Onion rings will be one of the first things I try. I’m giving them a little time to get their act together before I start going there. I’m thinking basic Butterburger, onion rings, and cheese curds on my first trip. Their menu looks fairly interesting for a fast food place. I’ve seen video reviews saying their fried cod is good. Wisconsin Swiss Melt interests me, as well. I’ve heard their chicken noodle soup is good. Heard their pot roast can be good, but sometimes not.

There are only two Yelp reviews of the location so far–a 5 star and a 1 star. The 1 star was mainly because order took a long time and was very wrong, and even after Culver’s tried again, they still didn’t get it exactly right. I’ve only been to a Culver’s once (in a different location), and they got my order wrong, too. Still looking forward to trying my local Culver’s.

FWIW, Freddy’s Steakburgers makes pretty good onion rings. Those and their patty melt is my usual order from Freddy’s.

Their fried cod is excellent, whether on a sandwich or as the platter. The chicken tenders are moist and delicious and are really chicken, not expelled and formed nuggets

All the Midwest-born folks also go there for their breaded pork loin sandwiches.

The pot roast is good but not their best work.

I had Culver’s last night, and it was hit and miss. Part of the miss was because I went through the drive-thru.

The cod was great, much better than I would expect from a fast food place. I got the platter. For my sides I ordered onion rings and mashed potatoes & gravy. …and they got my order wrong. I had decided I was just going to take what they gave me because the place was extremely busy. Checked the receipt, onion rings on there, smelled onions in the car, so I figured they were there, but it must have been the onions on my burger. No onion rings when I got home and unpacked. Oh well, next trip. Didn’t care for the mashed potatoes & gravy. The gravy wasn’t to my liking, and I don’t think the potatoes had been cooked enough before they were mashed. They gave me crinkle fries instead of the onion rings. I like freshly cooked crinkles, but by the time I got home, these were limp and not good at all, having steamed in the plastic container with the cod. The cod was still crisp, and I’d expect it to be even better if eaten at the restaurant. Don’t know if the onion rings would have held up, but I’ll order them as a separate item when I get cod again.

I ordered a Butterburger, expecting it to be a single, but the receipt showed a double. I decided to overlook that error, and when I got home it was indeed a double. The meat on the burger was good, but I wish they’d use a bun with more body, a denser bun. It gets squashed flat just handling the burger, same issue I recall from the only other time I’ve had a burger from Culver’s. Good burger but I think it would have been better as a single.

Cheese curds tasted good but suffered from not being eaten immediately.

Next time I’ll get the Wisconsin Swiss Melt and if I’m lucky the onion rings.

Yeah, their fries are a serious weak link. If theyre screaming hot they’re just ok, but I just toss them if theyre not.

In a second- they’re so rare I didn’t think of them until I saw your post, but wow, they’re so good

Thanks for mentioning this. There’s a Habit Burger less than a mile from my house that I’ve never been to, but I’m going there right now for some tempura green beans. And maybe a burger.