Tell us what’s in your oven!

This year I ordered a box of heirloom apples from Scott Farm Orchard in Vermont. I had wanted to do it last year, but they sold out before I could place my order.

I’ve already started tasting them raw (so interesting!) but with this many rather spendy apples, I’ll need to bake with at least some of them.

I’ll probably make another French apple cake, and I always make a fall-fruit (apple, quince and pear) crostata every year; maybe I’ll do one that’s just apples. It’s a Jonathan Waxman recipe I originally found on Epicurious; now that Epi requires a sub, I found it reprinted here.

I’m also considering an apple custard tart, like this.

Great job. Apple desserts are my favorite. We used to apple pick off trees with like 30 varieties near Bennington this time of year. Now you can’t there anyways. Personally I really love the cider donuts too. I’m curious what kinds of apples you get. Enjoy your treasure trove. Some of those apples can’t be improved on eating raw. How are they?

You should make strudel!

We’ve got apfelfannkuchen on our breakfast menu this week: 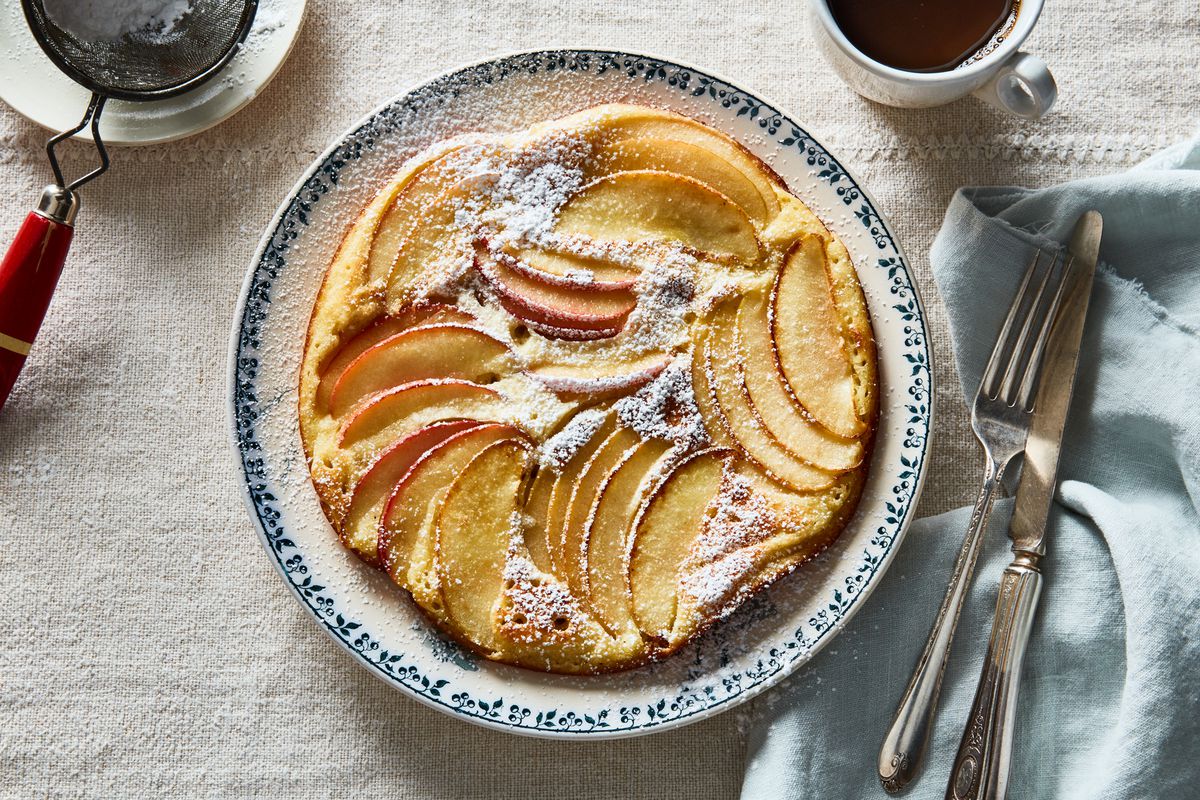 Another apple cake I’m fond of is the
Apfelmarzipankuchen from Classic German Baking. It improves with age, getting moister and more fully flavored as the days go by.

This morning’s bake… sourdough loaf with hazelnuts and yellow raisins,it’s 80% bread flour and 20% white whole wheat, a few tablespoons of rye snuck their way in as well. Planning on using it for curried turkey salad sandwiches at lunchtime today. This was adapted from Andrew Janjigian’s newsletter where he refers to it as The Loaf. Similar to a no knead, it rises at room temperature for twelve hours, then it’s shaped and refrigerated overnight. I usually do a few stretch and folds in the first hour of rising. This has been a consistently reliable bread for me, it also stays fresh for three days. I generated a fair amount of sourdough discard revitalizing my starter as it had been just to hot to have the oven on at high temperatures. I used the discard in the following post in a chocolate cake. 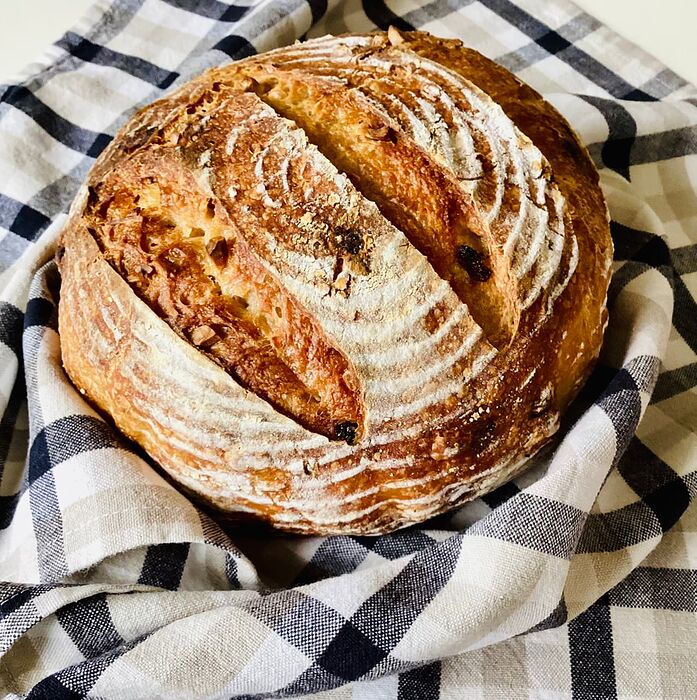 Sourdough Chocolate Cake adapted from a King Arthur recipe. I’ve made this twice and have been very pleased with the results. The first cake was half of the recipe and the second cake was one quarter. This is a light and fine textured crumb which is even better the second day. It also stays fresh for at least three days, possibly due to the sourdough discard inclusion. There is absolutely no taste of sourdough in the cake at all. A simple to put together cake, the discard is mixed with milk and flour and let rise a bit. The first time I made it, I just added warm milk and let it rise while I gathered the ingredients and waited for the oven to preheat. The second time, I made it according to the directions. We didn’t find any difference in the outcome, they were both delicious. 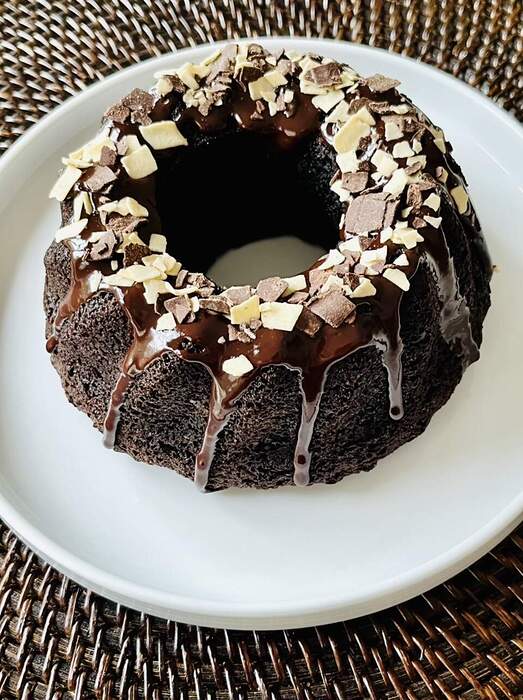 Soft pretzels, done with food-grade lye. I’ve done the baked baking soda version for a little while so I decided to try the ‘real thing’ 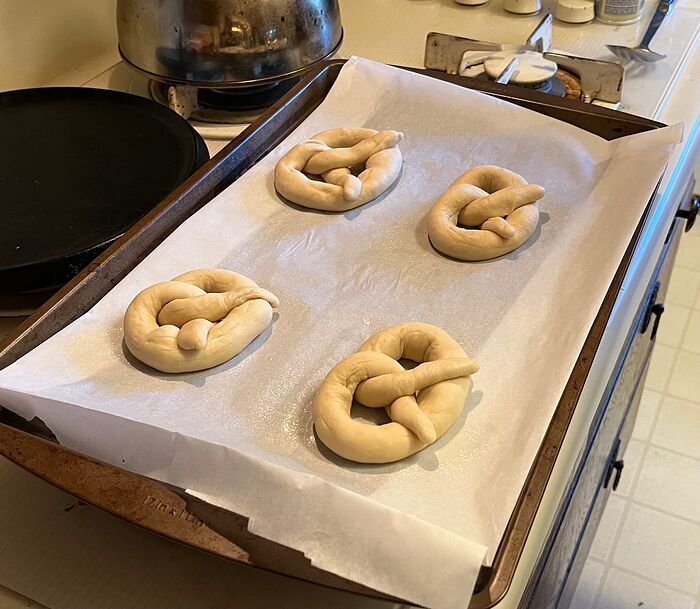 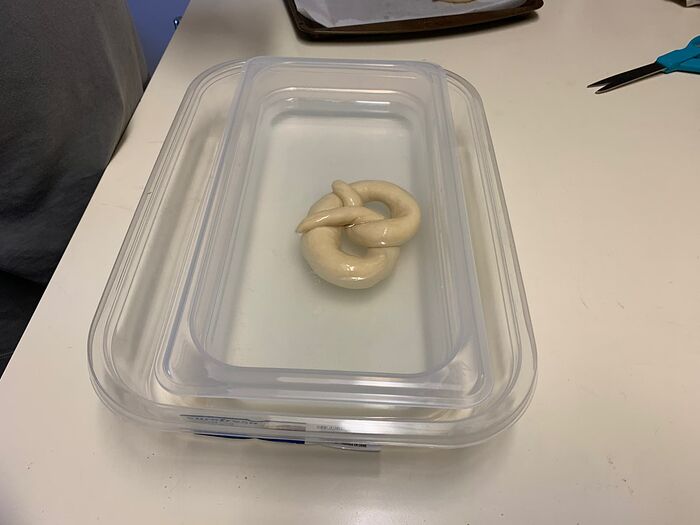 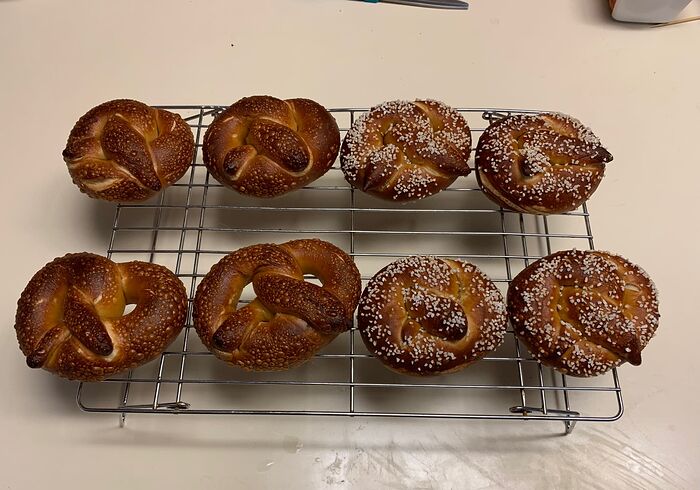 Real compressed pretzel salt, too. I found the trouble to upgrade to the lye process worth it.

Lye absolutely makes them better! And I use mine to make alkaline noodles, too!
Did you bake them on parchment? I find the parchment always fuses to the pretzels (or bagels too), so this is the one instance where I really like using silpat. Plus protects the baking sheet from discoloration.

I did bake these on parchment. I gave it a little spritz of cooking spray before I set the pretzels down to proof (having had them fuse the first time I made them).

I was hesitant to use the silo at because I was worried, weirdly, about the lye degrading the silicon, but I don’t think that’s an issue. I’ll probably use them next time.

They’re not made with lye, but since I have it, I decided to give it a try and I’ve been making them whenever I want alkaline noodles, which I can’t possibly buy here.

Definitely making this- looks right up my alley! thanks.

I definitely recommend waiting a day to cut into this cake. In the headnote, Luisa Weiss says the almond flavor doesn’t come through that much, but I find it’s more prominent two and three days after baking. 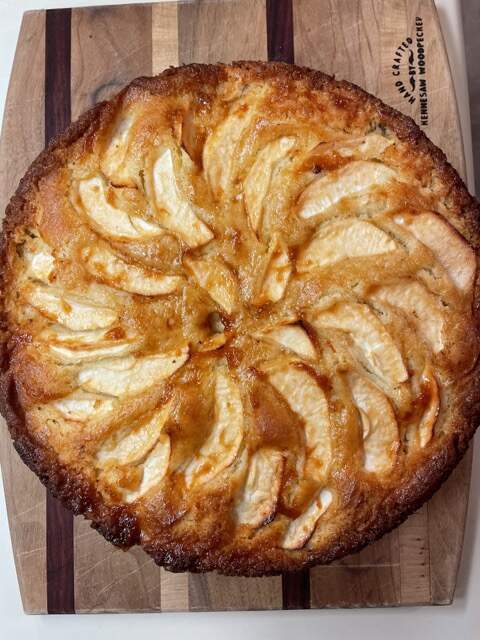 I was out of apricot jam, so I opened a jar of apricot-sour cherry and just avoided the cherry bits

This was definitely a labor of love. In comparison to the French apple cake, it took four times the time and effort. Looking forward to a taste

It’s pretty chilly indoors now, so I proved it in the microwave. Didn’t rise as much as usual, but baked up well nonetheless. I remembered to put a little rye flour in. Tangzhong as usual using 1/8c flour for a 2c loaf.

I’ve been using a 1.5qt glass casserole dish for these small loaves. Perfect size, the only downside has been that the loaves aren’t as crusty as in ceramic or CI (though that’s a positive for day 2 onwards), but maybe I need to bake a bit longer covered than I have been. 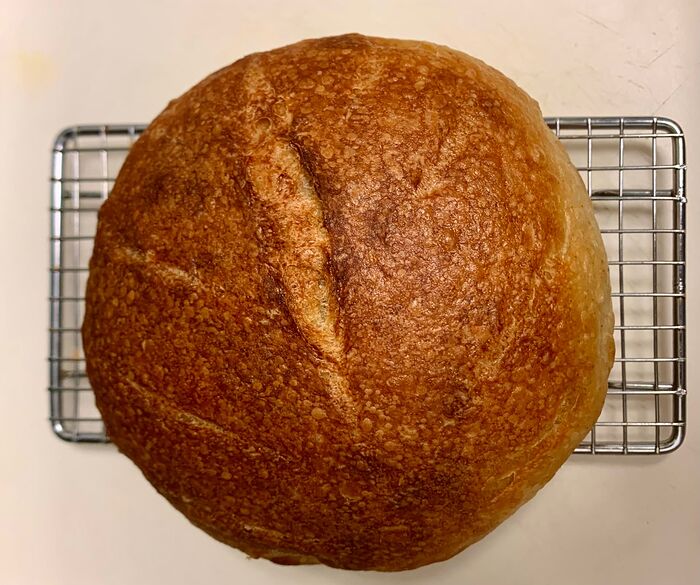 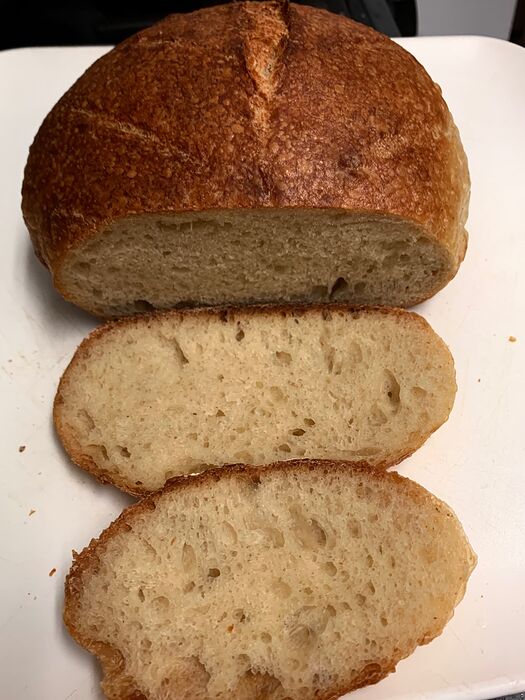 When the bread is finished baking, you could remove from the container and put the bread back on the rack for a few minutes. I’ve done this with various breads when I want a crisper crust…it usually works well.

I tried that today, and the bottom crisped up a bit but not the rest of the crust.

I’ve been baking 15 mins covered and 20 mins with the lid off.

I just realized the other difference is that I don’t preheat the glass casserole dish – I didn’t want to create a temperature differential when I plopped the loaf in.

But this is tempered glass so maybe I should just try that next time.

Preheating an empty glass container might be a little risky even if tempered. I might try leaving the bread in a shut off oven for longer. The crust certainly looks nicely browned. I baked my bread upthread to 210* internal, it was in a Corningware baking container with a glass lid. In fact, the lid had to be removed earlier than I planned as the bread was hitting the lid. I “think” if the bread is not quite dry enough inside, the resulting steam inside the bread will soften the crust. You can even return it to a shut off oven if you notice the crust has softened after being removed after twenty minutes or so. I bake on a stone so the retained heat in the oven is usually sufficient.

Yeah that was my concern with preheating class even though the comments on the product page suggested people do.

I baked to 208 yesterday, and it was the right texture inside.

Do you find the stone makes the bottom thicker than the rest of the crust? That’s what used to happen in CI for me (but never in ceramic) which is why I haven’t been using a stone (though I have a small one for my countertop oven, so I certainly could try).

One other difference to CI/ceramic bakes I’m realizing is that one sprays water on the loaf (or tosses in an ice cube) to create steam for the crust, but since I wasn’t pre-heating the glass container, no extra water needed

Going to try your trick of leaving the loaf in the turned off oven for a bit on the next loaf - seems less dangerous than preheating the glass empty.