The bottom of my crust is not thicker as a result of using the stone. The thicker bottom is generally the result of using CI. In fact, a lot of people have reported burned bottom crusts using CI. I get wonderful results using granite ware, which, as you know, is an enamel on thin steel. Here’s the best pic I have of a loaf showing the crust. 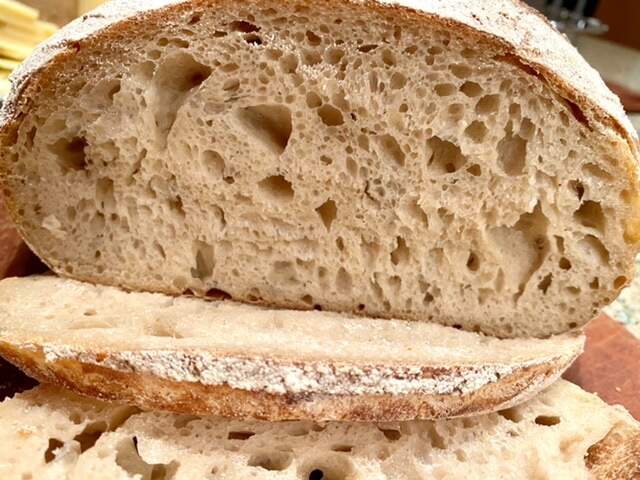 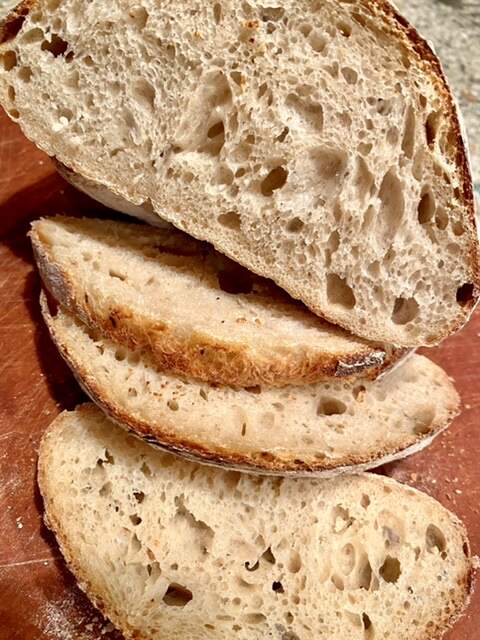 The second pic is a different loaf and you can see the bottom crust a little better.

Honey, I shrunk the pie.

This is a pan-less, free-form, two-crusted, apple slab-pie. It’s one of DH’s favorites, because he’s more about the crust than the filling. While I’ve made this recipe before, this is the first time I tried making a smaller pie out of it to make it more manageable for the two of us to consume.

I downsized King Arthur’s Crust Lover’s Pie filling recipe and Serious Eat’s Easy Pie Dough. Inside is one medium Honeycrisp and one small Akane apple from our trees. I made the whole thing even crustier by adding a lot of decoration on top.

About 9” across after baking, it is either one small slab-pie, or one giant hand-pie. 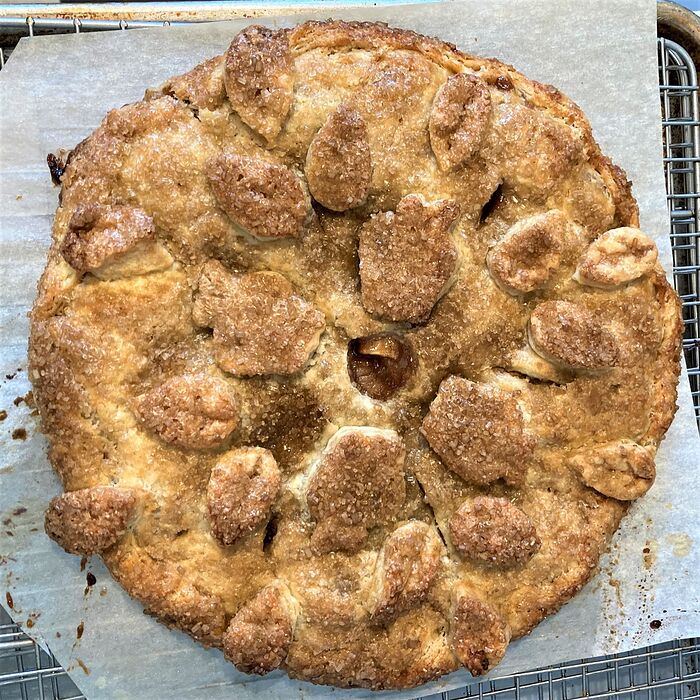 I tried out two different mascarpone namelaka recipes. One I really didn’t care for. It was too heavy on the white chocolate and too light on the mascarpone. It also turned out too loose. The other was great. I combined the two and added more mascarpone to make up for how strong the white chocolate was in the one recipe. I decided to try out KICA’s chocolate custard roll cake because I’d been curious about it for a while. Well, the cake rolls beautifully even when just left to chill for an hour or so in the fridge, and it combines very well with the namelaka. However, I’m not fond of how bitter it is given that it’s made with 80% chocolate. And my filling is likely sweeter than the coffee cream they use! I’d love to try it out again with something like 60% chocolate. Look how smooth the cake is. It doesn’t crack at all. 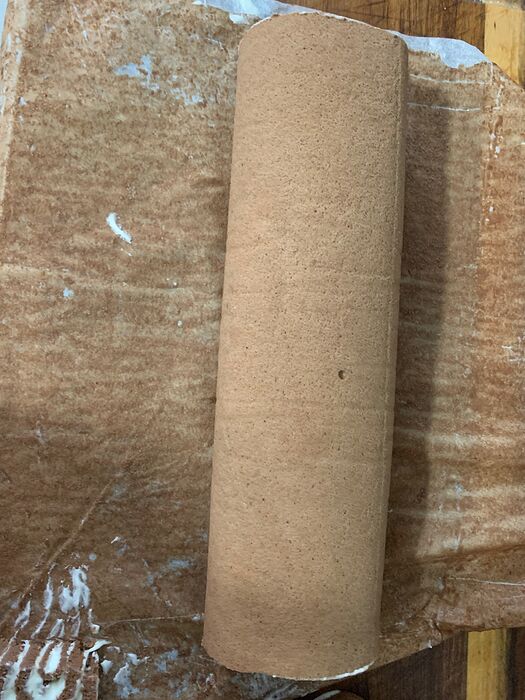 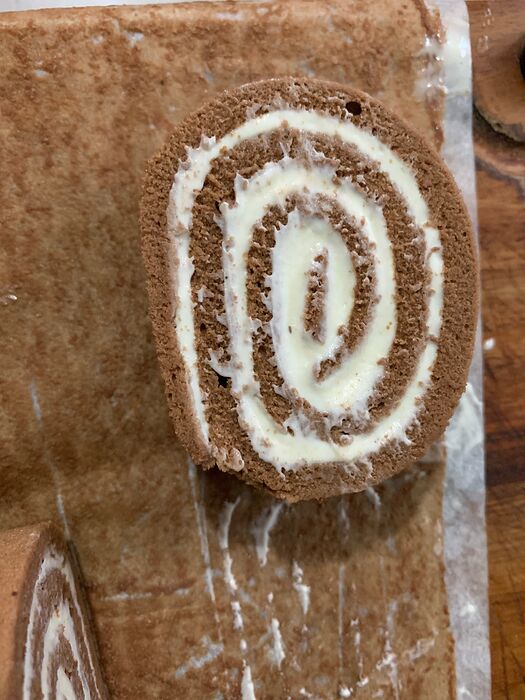 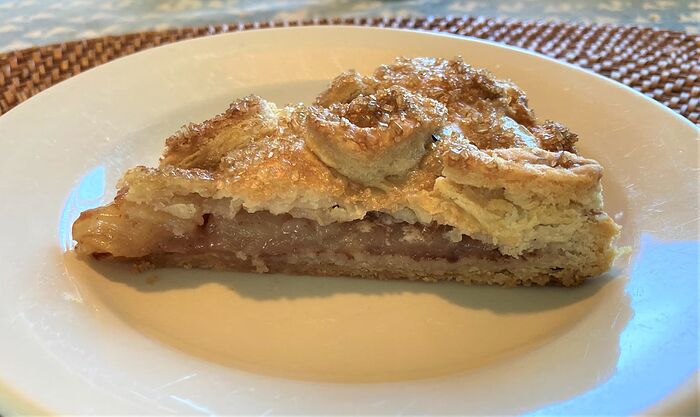 Update on this cake:

Not a fan of the taste or the texture, unfortunately.

Sorry it doesn’t work for you, that’s always a bummer.

Plum almond cake, almond meal was substituted for part of the flour and almonds and sugar sprinkled on top partly through the bake. We just had this slightly warm with a cup of espresso. I was able to put in almost a pint of quartered Italian plums by placing them vertically. Several different recipes were cobbled together for the cake part, which turned out fine crumbed and fluffy.Martha Stewart’s strawberry cake would probably be a good candidate for using plums rather than strawberries. 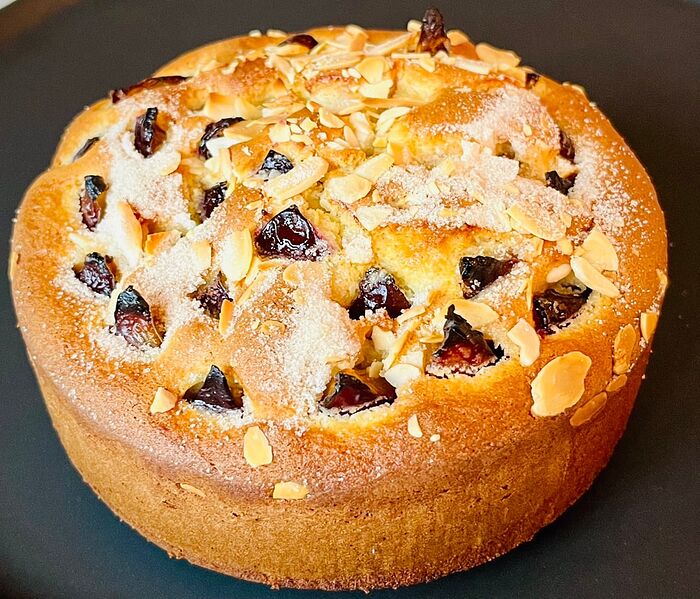 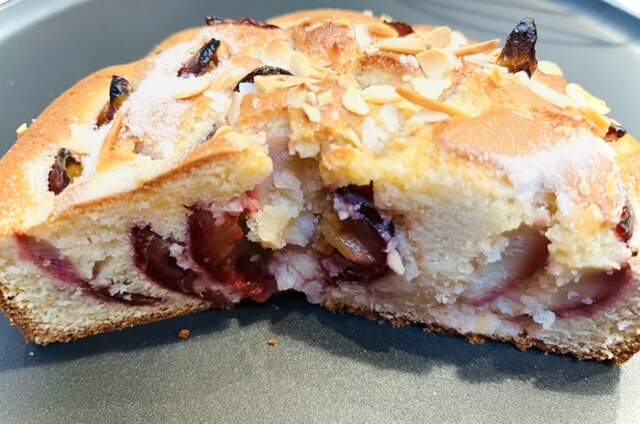 You deserved a better result for all that work!

Hah, thanks. I did take another slice today and I disliked it a little less.

Starting my holiday fruitcakes today. This is Alton Brown’s Free Range Fruitcake recipe. I soaked the fruit (golden raisins, sour cherry, blueberry, apricot and sweetened cranberry) for two months in Bacardi 10 Year rum. Apple juice was the liquid, and calvados brandy used for the preservation. These are six-inch cakes. Ultimately, I’ll bake 4 of these and 4 of the King Arthur recipe (the latter to be baked with a chocolate-cherry flavor profile). Six of the cakes I’ll give away at the holidays, and keep one of each for myself. 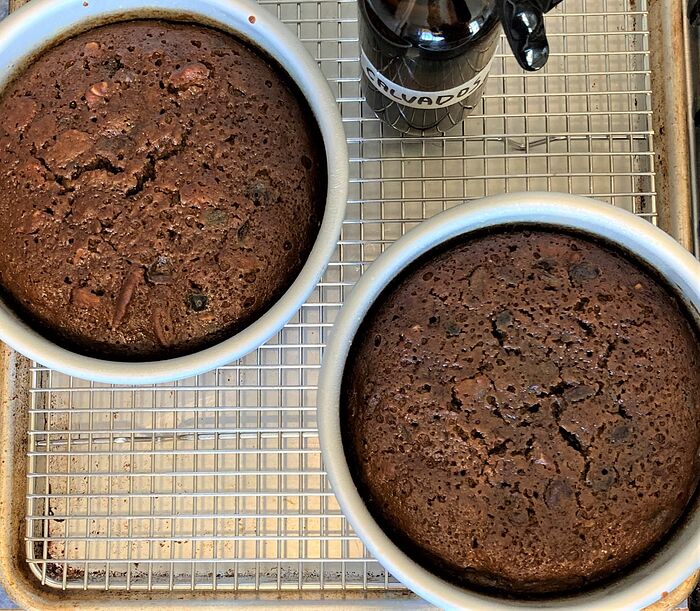 Have you made these recipes before? Have you tried many recipes? Any other recipes you like?

I made each of these recipes twice last year - my first fruitcakes ever.

In both cases, I chose my own variety of fruits, but went by the weights in the recipes.

I have never made the size of cake called for in either recipe. My first attempt at each was in 5"x3" mini loaf tins. At the lower temp of 300 called for in the King Arthur recipe, the bake seemingly took a long time, and ultimately I think I over-baked my first batch. I chalk it up to a learning curve (an expensive curve, for sure - I myself ate the results so nothing was wasted). Going forward I baked all the cakes - both 5"x3" and 6"-round - at 325 as called for in the Alton Brown recipe, and was much happier with the results.

The AB recipe, which calls for cooking the fruit (the KAF does not), is very simple to throw together, and doesn’t require a mixer. I like how easy it is to change the flavor profile by swapping out the liquid and/or alcohol for preserving.

The bit of cocoa added to the KAF recipe is heavenly, and my reason for repeating that particular recipe this year. I think, though, it limits one in the range of flavors one can play with.

The finished texture of both cakes (once I got the temp and timing down) was quite similar.

I gave away almost all the cakes last year (except the ones I overbaked) to positive reviews.

FWIW I managed to nurse one of the AB cakes into August of this year, spritzing it with alcohol now and again to keep it from drying out. It just kept getting better. I imagine the other would have too, if it had lasted longer.

I don’t have much experience with fruit cake. Maybe someone with more can chime in here.

I just did something a little wacky, born of my hatred of throwing things away. I will let you all know how it goes. I replaced the butter in a compost cookie recipe with a bunch of the fillings from toffee flavored oreo cookies. We bought the cookies on a lark when normal oreos were out of stock. The filling is much too sweet, but has a strong caramel tone. I love putting butterscotch bits or cutting up caramels into bits to throw into a compost cookie, and so, voila. Apparently mostly the oreo creme is oil and sugar. I decreased the sugar a bit in my recipe. The dough is in the fridge now firming up.

I’ve had the marginally insane idea to use frozen paratha or scallion pancake in place of puff pastry, and I finally tried it out today.

Testing out a Diwali app idea — chutney and cheese (or some other twist on) Tarte du Soleil.

I used one circle cut in half.

I’ve long had a suspicion that these tarts look impressive but must not cook evenly, because (a) puff is finicky anyway, and (b) the twists, and this wasn’t too far from the truth.

But - delicious! (I mean I haven’t really come across chutney plus cheese not being delicious, so adding puff was gratuitous additional deliciousness).

I’m thinking about using the pastry sub, but skipping the twisting. And maybe I’ll add some potato. Let’s see. 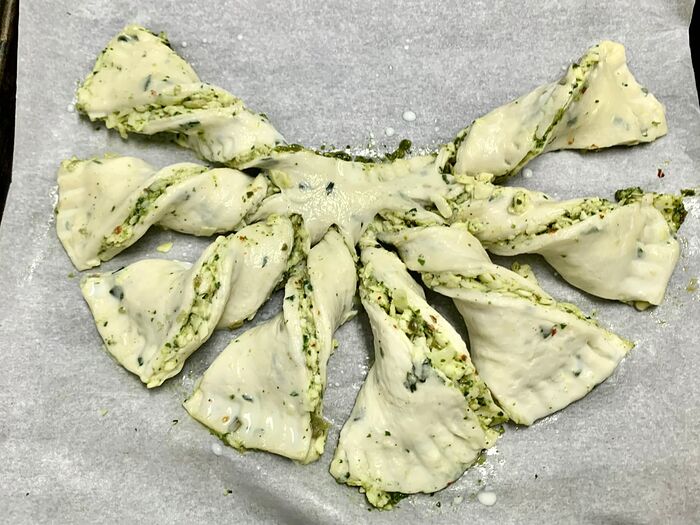 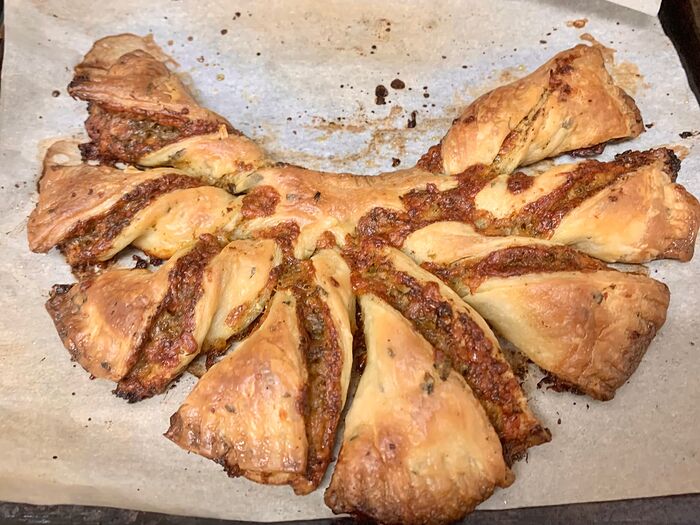 You can safely solve this problem by using parchment paper - lightly wet the paper, crinklle up, uncrinkle and load dough on parchment into your preheated glass dish - the parchment will act as a barrier and by crinkling it, you will solve any weird paper dents in your finished loaf.

Verdict - taste is ok. Pretty close to normal. Texture is a little weird. The cookies flattened completely in the oven. They also hardened up and have little chew to them. I should’ve kept a closer eye and removed them 2 minutes earlier. But all told, a soso cookie is still better than a day at the office etc etc. And I didn’t waste the oreo cremes

Occasionally when strawberries show up at the supermarket and they look nice I get some hoping that this will be the batch that isn’t terrible. And it’s always a letdown. Dominican strawberries are just so sour and always underripe, so my desire for a classic strawberry cake can’t be fulfilled. I decided to try to get around that by putting them in a cake with buttercream, with the hope that the rich and sweet Italian meringue buttercream would mitigate the sourness. But it didn’t. The only way these berries can be made to work is to get some sugar on them. Unfortunately I have been unable to get cream that will whip lately, so I scrapped any plans for a whipped cream treat with macerated berries, which would be the best course of action. There is just no point to ever using these as is in a cake. The genoise and buttercream are good, but the berries just taste like something sour in it.
Also I still find layer cakes to be such a bother 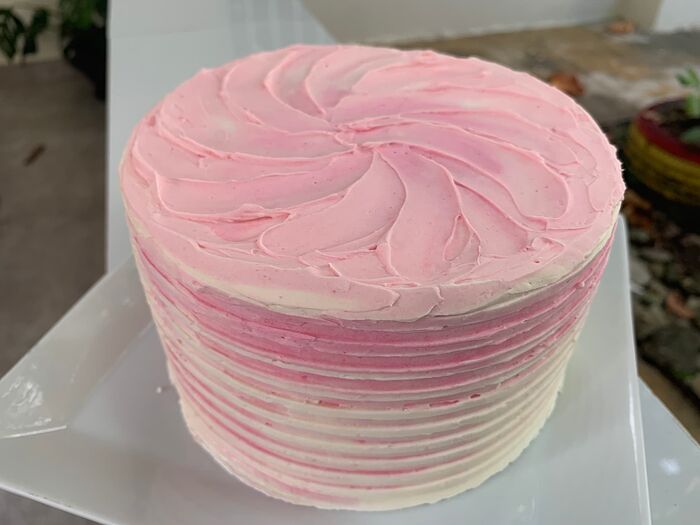 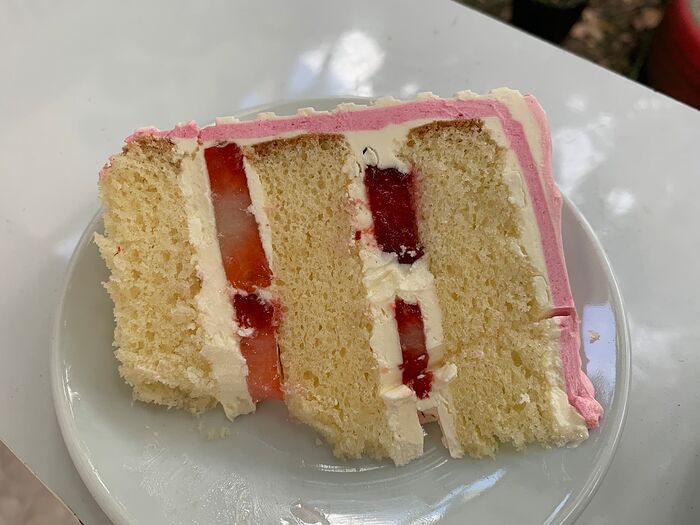 Ha, I genuinely feel smitten with it! I keep giving it another look when I go to the kitchen. It’s so close. If at least the berries contributed real strawberry flavor! 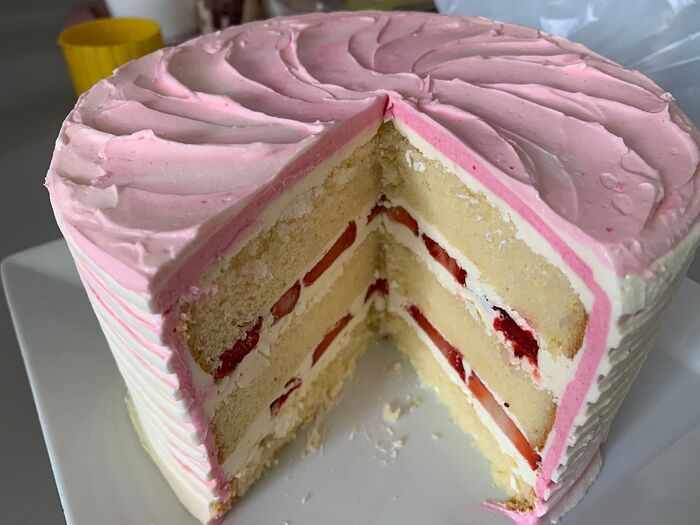 As a strawberry fanatic I have not hated the flavor from freeze dried strawbs (in frosting specifically.) do you have access to those ?