yeah, i’ve made them… they don’t get me excited for some reason. i suspect because they’re so light and i’m a pig!

It’s a wonderful cake, flavorful and moist. My husband immediately commented that he appreciated the restrained use of sugar. 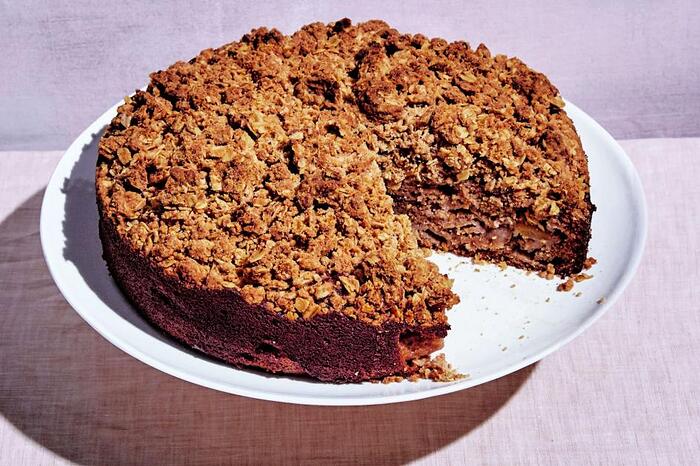 The US baker and self-confessed 'dessert person' Claire Saffitz shares her fall recipe for a caramelized honey pie to remember.

oh that looks great! i have that book but haven’t made that… i need to correct that

i think i’ll replace the oil with butter though. 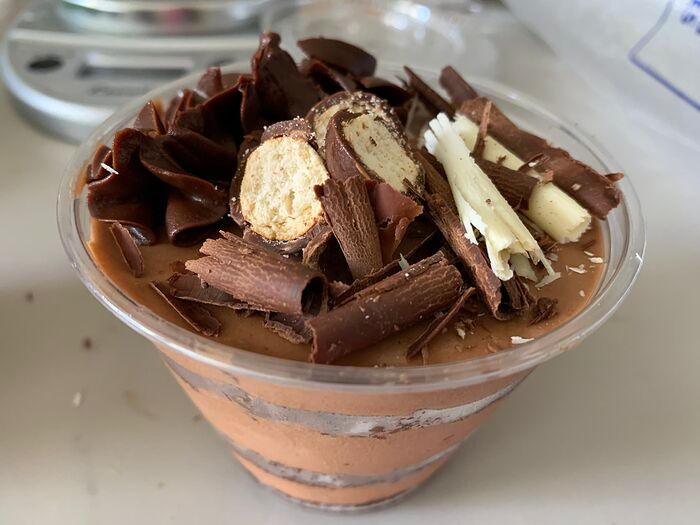 I made cup versions of the cake I made for my SIL. Making it again I can assess if anything needs changing and I think an ounce of sugar removed from the cake would be good. For the cup version for cost purposes I would dip the tops in ganache instead to end with cake layer so I don’t use as much mousse, as I have leftover cake. I’ll use the scraps to make some sort of mousse, either cake mousse like this, peanut butter, or a triple coffee one. 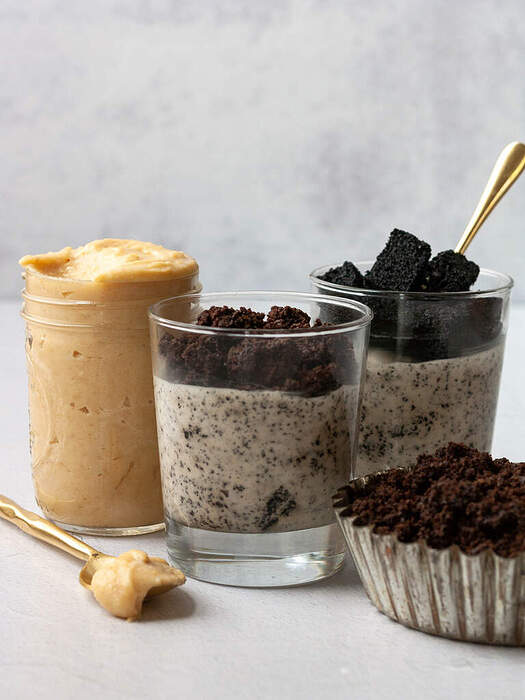 Someone who tried the birthday cake told the person I gave it to that if I made this cake for her she’d hide under the bed to eat it all herself.

Oh, and on my whipped cream saga, recently I had some of the 40% refrigerated cream not whip on me, so I took exact temperature of it and realized that even being on ice and having chilled the bowl it was over 40° F. I have since made sure my cream was 39° or below and even the UHT 35% stuff is whipping up fine! Amazing what just a few degrees can do!

I made Dorrie Greenspan’s Banana Breakfast Squares. They are delicious and I say this as someone who is not a Dorrie Greenspan fan. I know it’s heresy to say this, but I dislike her World Peace Cookies.

The Banana Breakfast Squares are flavorful; the banana really comes through. They have a fluffy texture and nice crunch due to the inclusion of nuts, oats and flaxseed. The nuts, oats and flaxseed also provide enough fiber to keep me full for a few hours. I dislike eating breakfast only to feel hungry half an hour later; buttermilk pancakes, I’m looking at you.

I used walnuts for the nuts which I toasted first even though the recipe doesn’t call for this step; in the words of Deb Perelman of Smitten Kitchen, “Always toast your nuts.”. I used dried wild blueberries for the fruit; although I like raisins which the recipe recommends, I thought blueberries would go better with banana. I used buttermilk where the recipe calls for buttermilk or sour cream.

Those of you who like your sweets less sweet should probably pass on this recipe; it’s pretty sweet. If you reduce the sugar you will compromise the soft texture. You also could consider using cranberries as the dried fruit. Banana squares for breakfast and an important recipe update

Unfussy, uncomplicated, but oh so scrumptious

Peanut Blossom Cookies recipe from ATK The Perfect Cookie. These are so good. I had one before they cooled down. Dry roasted peanuts are ground with flour and this gives the cookie texture. I used milk chocolate and cookie and cream kisses. Oh and there is peanut butter. The christmas baking has begun. 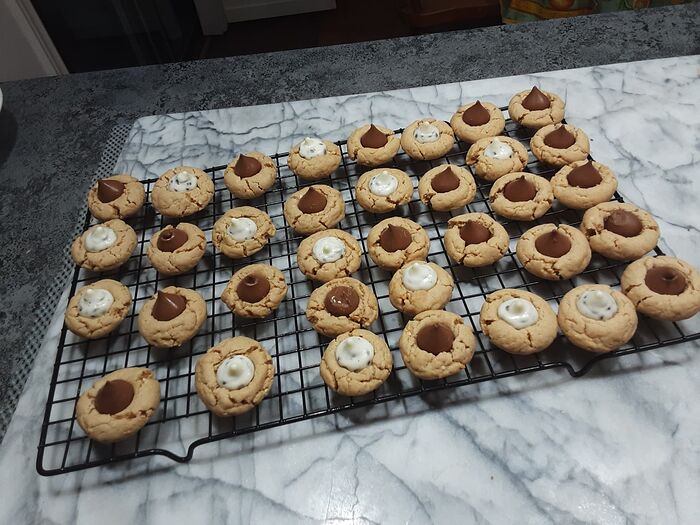 I decided to make macarons for the first time in at least 10 years. To be honest I never thought they were as difficult as people say so long as you remember the “flow like lava” description, but I decided to brush up with two of my favorite channels. Being that I follow so many Korean creators, this was then suggested to me and I loved watching her toss convention out the window. The macaronage didn’t shock me because I know that’s how large scale operations do it, but the fact she starts the meringue throwing the sugar in right away and doesn’t rest the shells before baking is pretty cool. However I suspect this won’t work unless you have a nice convection oven as she does. But letting the shells rest for a bit to dry is no big deal. The reason I decided to make macarons is because I have some leftover cream cheese German buttercream and I usually have egg whites, and in spite of my lack of enthusiasm about macarons, they’re a good way to repurpose those two things. Planning on red velvet and pumpkin pie cheesecake. Here is her tutorial: And I will also include Jerry Long as another favorite channel who makes some pretty phenomenal macarons: Tart for two… chocolate pastry crust, chocolate crème patisserie and raspberries. The crust was blind baked and a thin wash of raspberry jam was applied prior to the pastry cream. The crust recipe was from “Pastries”, the Portland Baking Co. a very nice crust that cut nicely and was plenty chocolatey. Pastry cream was an adaptation from Alice Medrich which used rice flour as the thickening agent. I should have made two! 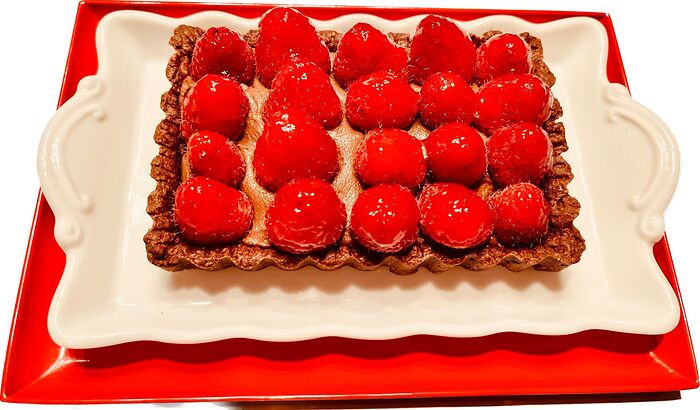 Nice. I made macarons the other day using swiss meringue method. Well as i was mixing them my next door neighbour who is an appliance repair man came to look at my fridge that is acting up. This threw my timing right out. Will try again this weekend. Unlike you i love the whole process of making macarons. They are sweet thats why we stop at one.

Ricotta Browned Butter Cookies, thanks to Shellybean and mig. These were easy and delicious, not too sweet. I let dough rest overnight in fridge, they took the specified 12 minutes. 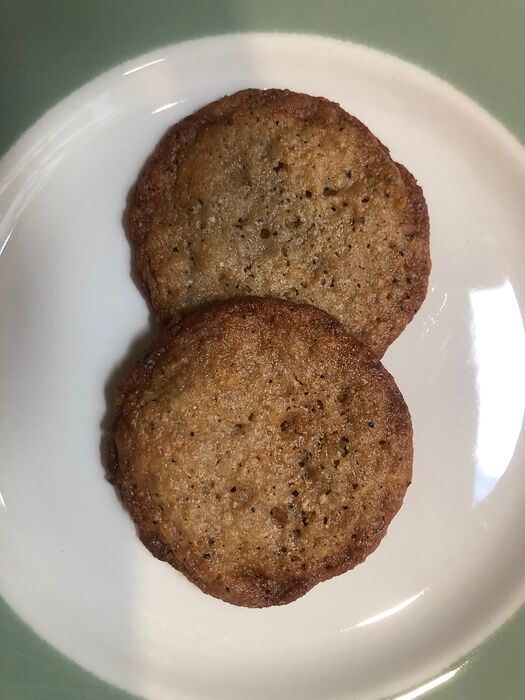 This afternoon I was watching “Glen and Friends Cooking” on youtube. His newest recipe is a Carrot Cake. My girlfriend walked into the room as I was watching it and said “I love carrot cake… can you make that??” I had everything in stock except for the pecans which were optional anyway… So this afternoon I made a carrot cake for “Sunshine” and she loved it. I did cheat and use “Betty Crocker” frosting, but she prefers that frosting over home made anyway, so all good. 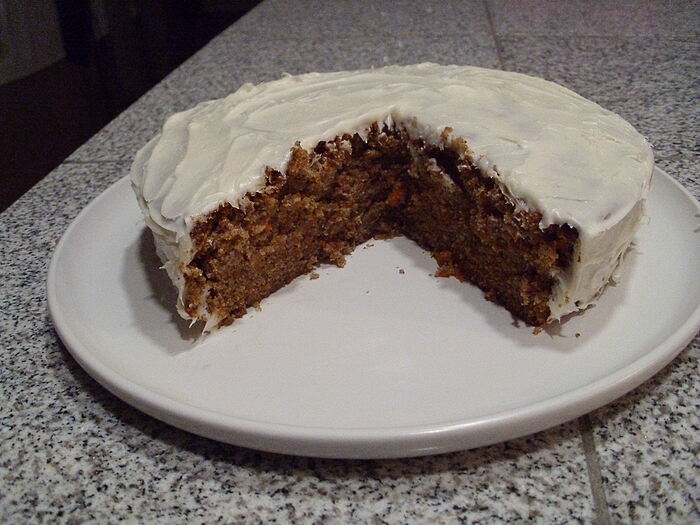 A few weeks ago I posted that I often found my quiche crust tough and difficult to cut. I make it in a regular pie pan. A few folks suggested using a springform pan instead. I’m not clear on why the pan would make a difference, but I’d like to ask: if you have a quiche recipe you love and works well, I’d love a pointer!

I absolutely love that you are not only still in touch, but still dining together, with families now. I’ve never lived anywhere long enough to have those type of relationships spanning decades.

I use Stella Parks’ pie crust recipe as my quiche crust.

It’s the first pie crust recipe I’ve tried that doesn’t inspire me to curse. It doesn’t tear, shrink or get tough. 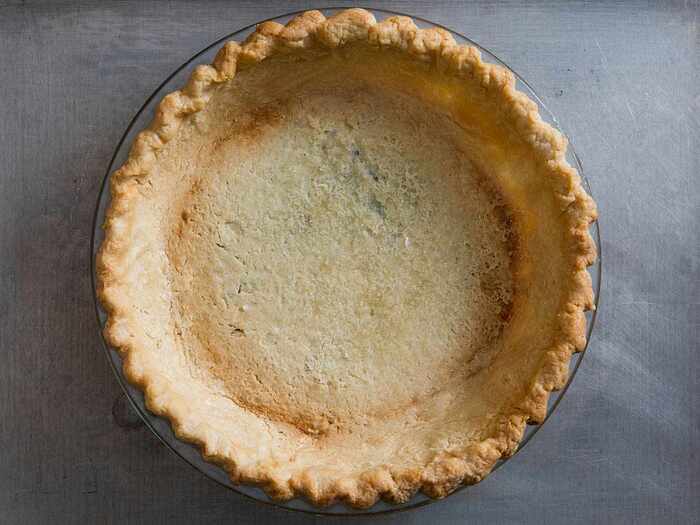 I doubled the recipe for milk bread from Mooncakes & Milkbread. Baked in a 13" pan. Sections will be given away to family. 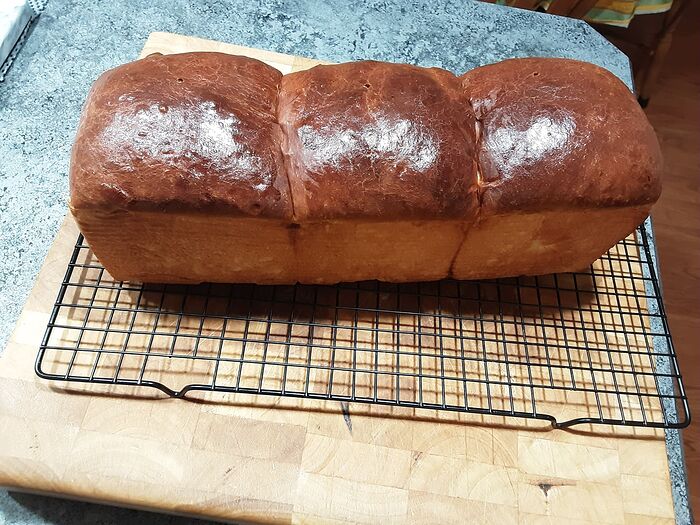 My daughter took a few cookies to pass out at work … everyone loved, asked for the recipe.

I use to be afraid of attempting browning butter. Once I got over that hurdle, the recipe was easy.