These aren’t very chewy since they’re more in the style that’s meant to be very light and crisp with a thin crust.

I typically make these: Bánh mì Việt Nam. Or Vietnamese baguettes are a street food staple in Vietnam. They are sold on every street corner. And for good reason. I like using butter or lard for the fat rather than oil.

The main thing about this style is that it requires the gluten to be really well-developed to get that really light texture.

For classic French baguettes I think I’m gonna embark on making these now that I have a lot of flour to work with. 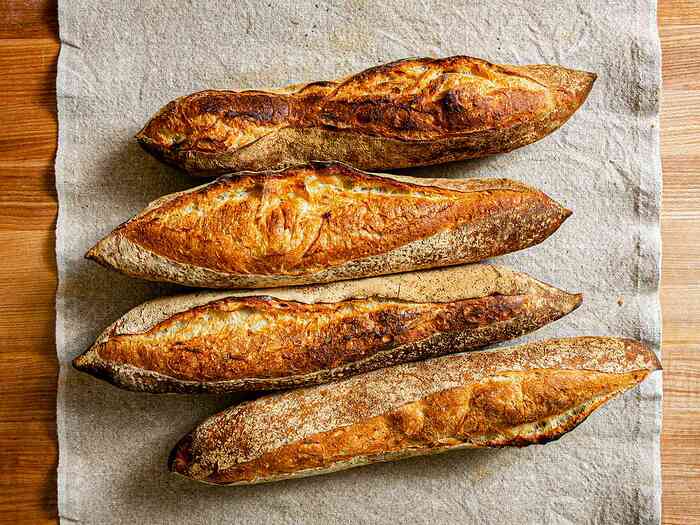 Everything you need to know to make perfect French baguettes at home.

I must say Chain Baker’s method of transferring the baguettes when using the couche is so much simpler than Andrew’s. Do you prefer the butter over the oil for taste or texture or both?
Thanks for the recipe link.

For these small an amount for taste, and because I try to cut down on using flavorless oils, and olive oil seems an odd choice for a lot of these breads, but olive oil does make nice bread and I don’t find it noticeable in terms of flavor, so could certainly use that. Whatever you prefer and is easiest should be good really.
In the case of lard it’s what was used in a lot of these breads based on baguettes, like bolillos, and it gives a nice flavor.
Charlie at Chain Baker did a comparison of fats here: Sunshine finished up her Peanut Butter cupcakes last night and asked for another batch of those Chocolate-In-Between treats. They just came out of the oven. I scored where I will cut them, after they cool. Then into a zip-loc bag for her to munch on. Making these treats is becoming easier each time I do it. 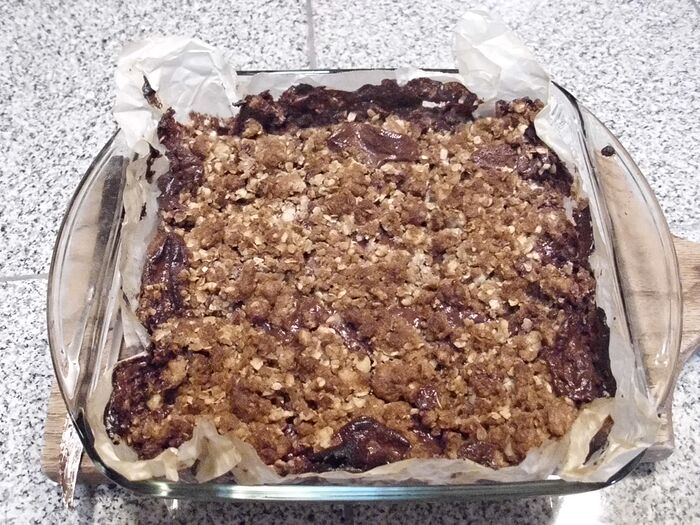 Anzac cookies, as inspired by @sallyt and @Shellybean upthread.

I chose this cookie to bake as we enjoy an oatmeal-coconut cookie, and I have both golden syrup and unsweetened coconut to use up as part of my pantry cleanout.

I don’t have access to Joanne Chang’s recipe, and used one from Bon Appetit (here). The BA recipe doesn’t call for raisins, so I made several without and a few with. A half-batch of the BA recipe made 14 cookies using a #14 cookie scoop. The 2nd batch, which both had the raisins and also gave the baking soda a little more time to work, spread less and gave a chewier cookie.

What a smart recipe! So easy to put together - no creaming of the butter, no mixer of any kind required, no measuring cups (if you use a scale), no (currently very expensive) eggs, and an easy clean up. We loved the final product, and had no preference on the raisins either way – both versions were good. 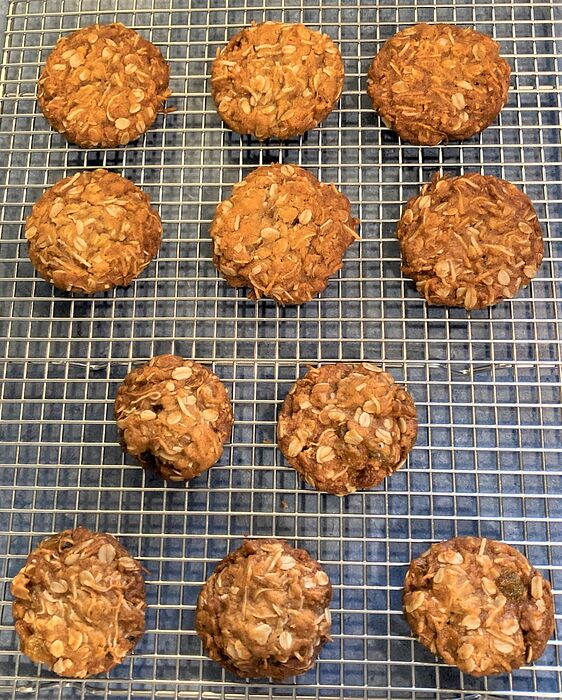 I’m so glad you liked them. They really are a great cookie with very little effort involved.

It is believed that eating a round shape dessert or a ring-shaped cake will bring a full circle of luck for that following year.

This made me chuckle because for some reason I’ve never been one for making square/oblong desserts, apart from the French cake called “Le Fraisier” (because I like strawberries with marzipan and buttercream). I’ve never made squares of any kind.

Chocolate Cream, aka petits pots de crème.
I took my Crème Caramel recipe, minus the caramel, added chocolate to the milk, and baked it in small Chinese teacups. This forms a thin layer of chocolate on top of the chocolate cream. Nice and smooth and chocolatey. 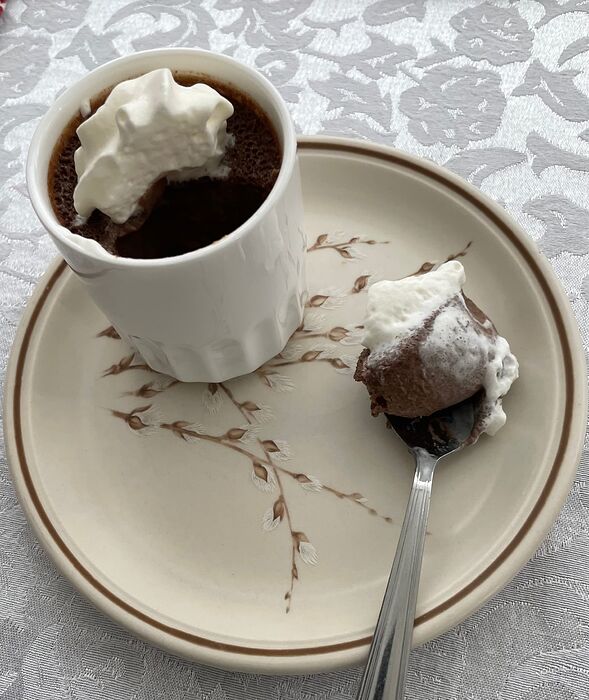 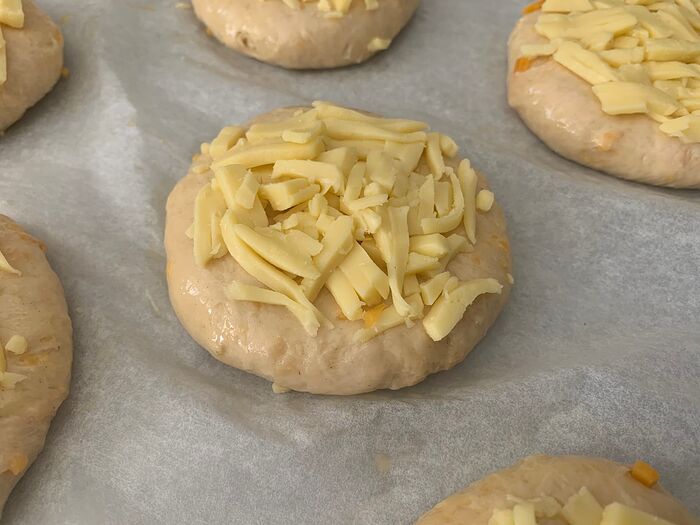 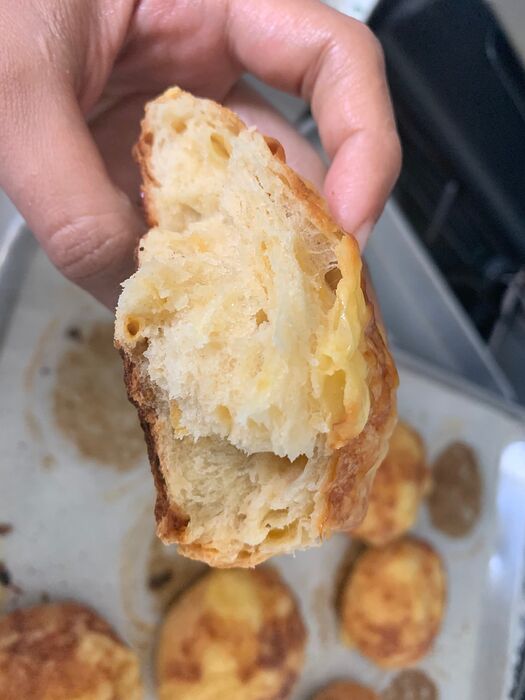 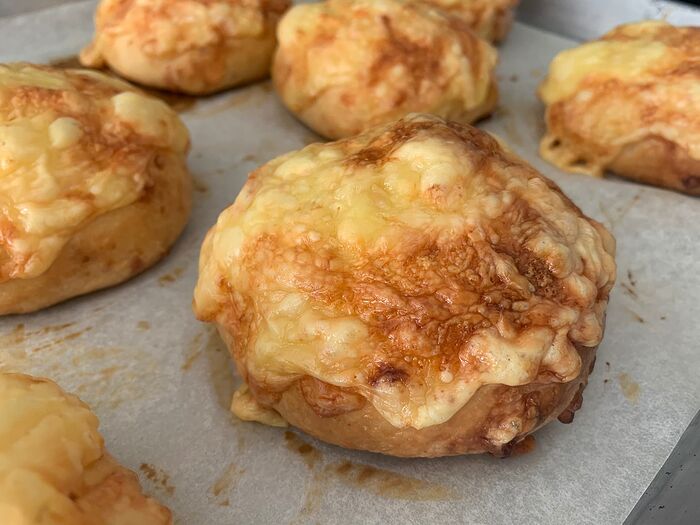 I made Chain Baker’s cheesy morning rolls and I love how when you take them out of the fridge they’re not encouraging, but they obligingly puff and end up tasting a bit like brioche once baked.

Made a Kentucky butter cake for a friend I’m meeting for the first time IRL tomorrow. We met at work during all-remote times, and have kept up our friendship even though we’ve both moved on from that particular job. She’s getting a Nordic Ware bundt pan as a house-warming gift, and a Kentucky butter cake to help motivate her to use it.

Anyway, I always have leftover batter from this and I like to bake up a couple minis in my cakelet pan. Cook’s treat 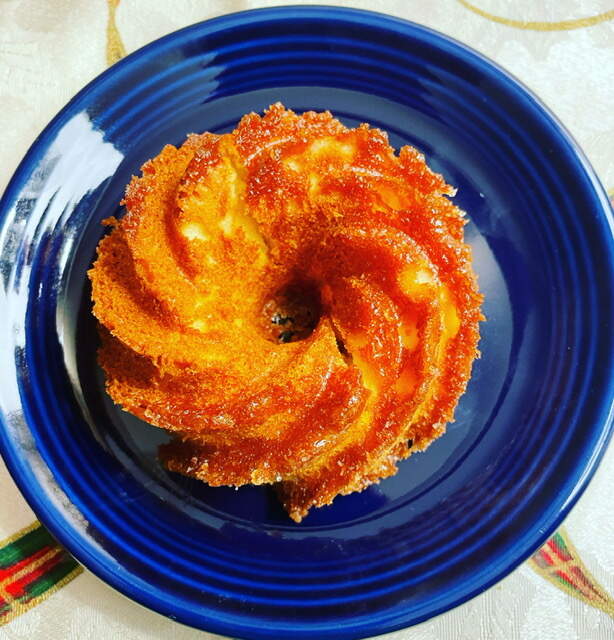 Good reminder of how much I love that recipe! What a great gift…

I am seeking suggestions for a delicious vegan cake for a milestone birthday.
Preferably non chocolate, but am willing to consider chocolate as a last resort.
Can be scaled up or down as needed would be very good.

I just looked at the Chain Baker site and you tube. Its great. Thanks.

With or without frosting?

My favorite birthday cake just happens to be vegan and is very easy; I like it best as chocolate, but you can pick your flavor of choice.

This is similar to @Saregama recipe. I use this recipe all the time for a quick cake to take to a party. I’ll throw a quick glaze on top (powered sugar, meringue powder and water) - food coloring - to make it fun.
It is a chocolate cake, though.

Want some cake but don't have the time to make it? Try this recipe for a quick and easy chocolate cake mixed in the pan it's baked in!

In the middle of making a milk bar carrot layer cake.

Saw a few friends this week-end… so obviously did some baking for them. It was a a friend’s birthday earlier this month, and I finally got to see her. She is lactose intolerant, so I tried baking with vegan butter. I made these https://www.davidlebovitz.com/salted-chocolate-chip-tahini-cookies-cookie-recipe/. I think that they are better with butter, but still pretty good apparently. 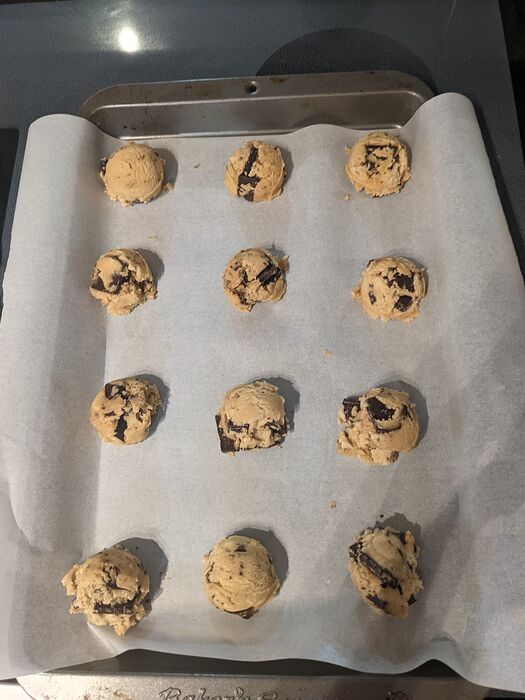 Tahini CCC before1920×2560 315 KB
Then I baked up a roll of salted chocolate chip shortbread cookies. https://smittenkitchen.com/2017/12/salted-butter-chocolate-chunk-shortbread/ the dough was a bit crumbly… still tasted good! 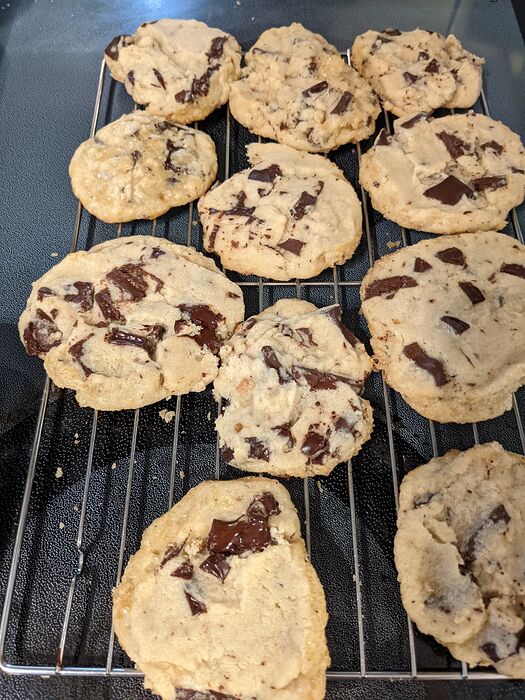 This is a yeasted, laminated, sour-cream biscuit dough – one fold with butter, three with cheese. I gave the dough an overnight rest in the fridge after the final fold, as suggested in the recipe.

I used a sharp white cheddar for the cheese and did not add the sugar (optional). I find most of EJM’s portion sizes in this book too generous for our household, and made 4 biscuits out of one-quarter recipe (instead of the suggested 3). As a result, the bases were relatively narrow, and the biscuits toppled. Still, they were hugely satisfying – light as air, crispy and flaky.

Hard to call them a biscuit, but definitely a pastry. Will make again. 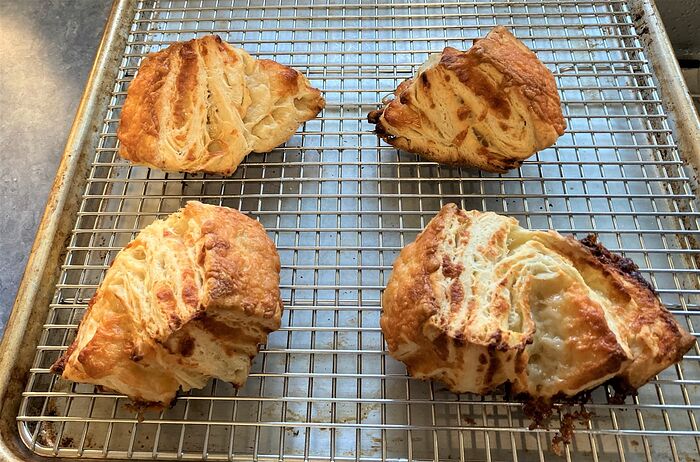 I also made cheesy bread. I bought a lot of Eric Kayser’s cheese bread when I was working in Brooklyn, so I was happy to see a recipe for it released a little while ago on his YouTube channel. I used some Gouda I had, so I doesn’t taste exactly the same as his version made with Emmental, but the bread tastes like the one at his shops otherwise. This one is made with starter and a little yeast. I used starter that I refreshed a couple of days ago straight from the fridge, so my bulk fermentation took significantly longer than 1.5 hours. But I just kept going until the dough looked nice and bubbly, then shaped and only needed about an hour on final proofing. 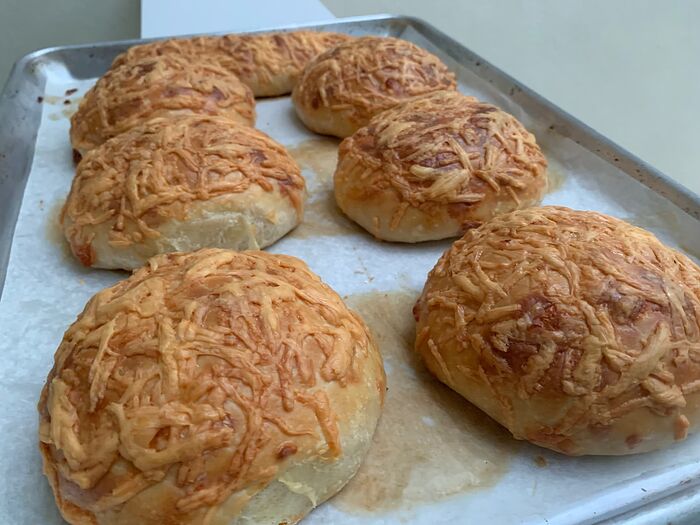 Btw, I’m looking to make Rose Levy Beranbaum’s white genoise from The Cake Bible, but I don’t have a copy of the book here and was wondering if someone would be kind enough to share the recipe with me. I found an Italian blog entry that seems to be it, but I’d like to make sure it hasn’t been changed from the original.

I’m not at home at the moment, but I can share it in a bit when I am.