Horn Barbecue, West Oakland, CA.
Much has been written about Matt Horn’s new brick and mortar, and let’s just say it lived up to the hype. I had read about 2 hour waits so pre-ordered instead. On Saturday at 1:00 the line looked to be about 30-45 minutes, so next time I’ll wait in line. BBQ sold by the pound, but pre-ordering there is 2 lb minimum for brisket, etc. If you wait in line you can order 1/4 lb minimum and can try more variety. Pre-order brisket is half fatty half lean. Strong peppery bark, deep smokey flavor and perfectly rendered fat, falling apart in the fatty, which is my preference. Collards were decent, but a little bland. Pit beans were great, super smokey from pit drippings with bits of brisket. Easily the best BBQ I’ve had in the Bay Area, and best since my last trip to Austin.
Swung by Ono Bakehouse in Berkeley for a chocolate haupia pie and Queen Emma slice cake with guava, passionfruit and coconut. I love tropical flavors and these were great!
Oakland has some great new additions to the food scene. 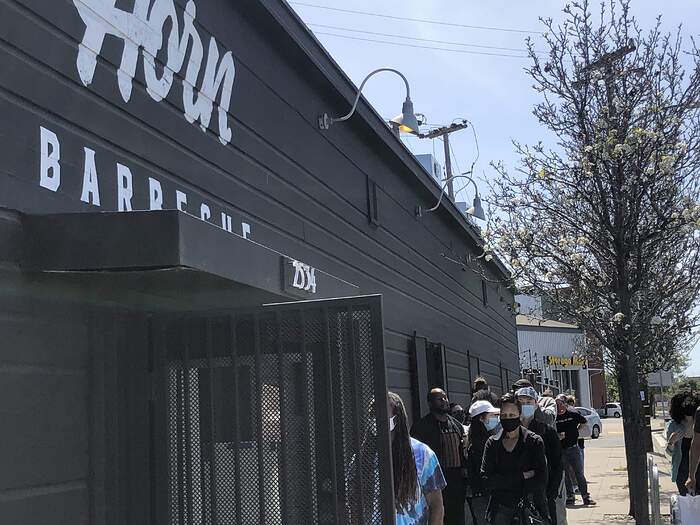 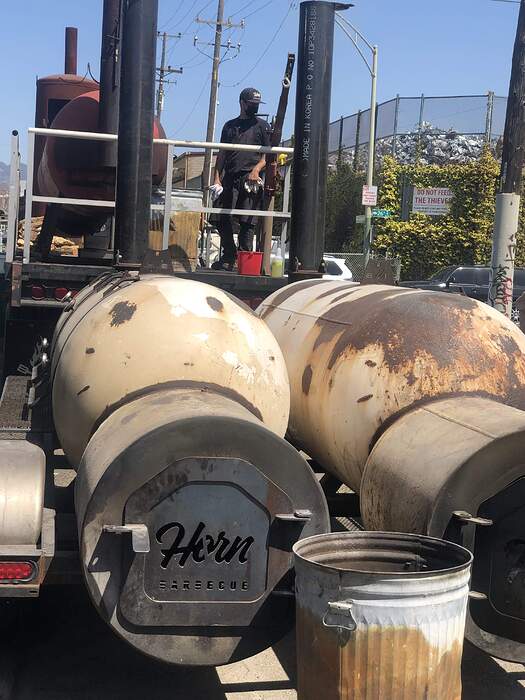 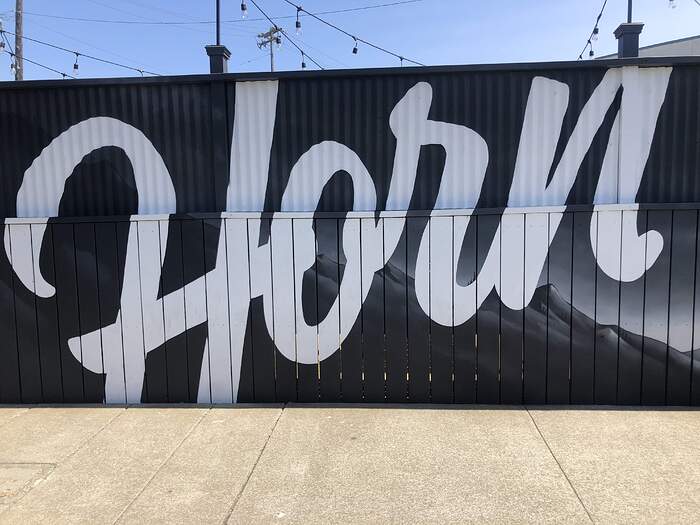 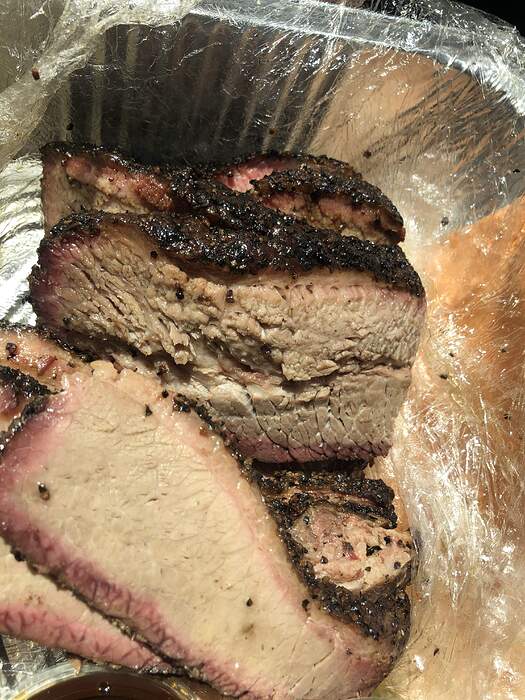 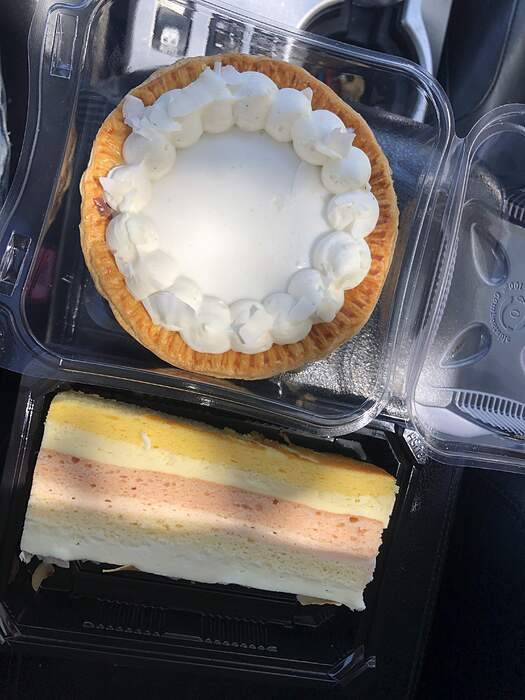 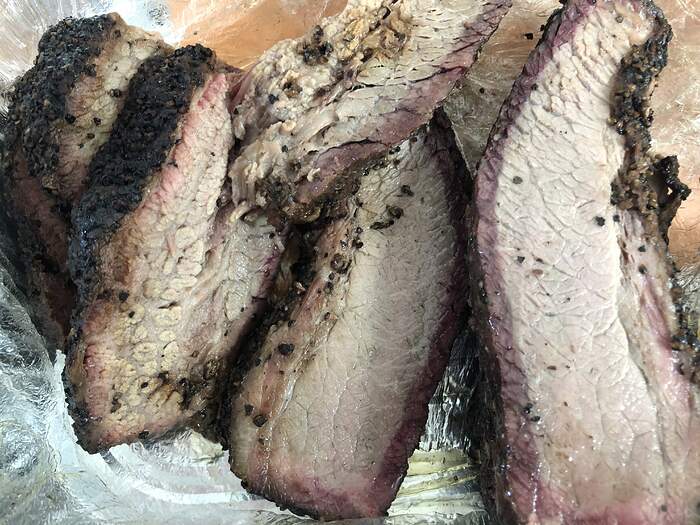 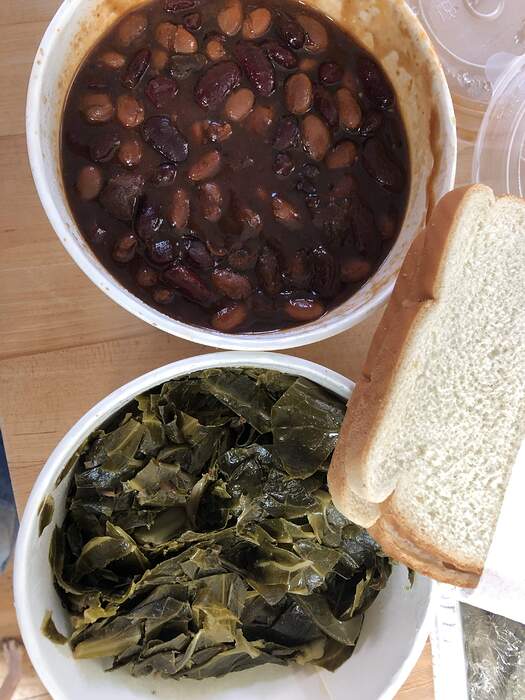 Totally envious of both the bbq and tropical desserts! Drool…

Did they run out of anything at 1pm on Saturday?

Hmm, I really don’t know because I was picking up my pre-order, which is a different line. I did see people continue to get in line as I was leaving, so there appeared to be plenty of BBQ, but I don’t know if they had everything on the menu. When I pre-ordered my brisket they were out of links.

How long was the wait in line for pre-orders? That seems like the way to go.

No real wait 5-10 minutes, they give you a specific time to pick up. The downside of pre-orders are the minimums, 2 lbs for brisket or pulled pork, only large sides and the massive beef ribs were a 3 piece minimum, which was something like $130, so unless you are ordering for a large group (or are a competitive eater), you are limited in how much variety you can try. If you wait in line you could get one beef rib, 1/4 lb of brisket, 1/4 lb of pulled pork, etc.

Thanks for the info. That is helpful to know. I really dislike lines for food (see food trucks) so order ahead makes sense…but only for a crowd as you suggest.

Second visit. Saturday at 12:30, line not bad maybe 40 minutes. They ran out of the beef ribs as soon as we got in line. Tried the ribs, chicken, hot link, fatty brisket again and sides of pit beans and mac-n-cheese. Ribs had the same peppery rub as the brisket, but seemed overcooked and dried out. Chicken was also somewhat dry with tough skin. Hot link had pretty finely ground meat and heavy powdery spice taste, mostly cumin and cayenne, rather than beefy. I was kind of disappointed in the ribs, chicken and hot link.
Fatty brisket was again, sublime. I’d like to try one of those beef ribs someday, but think I’m going to stick with the brisket, which is world class. 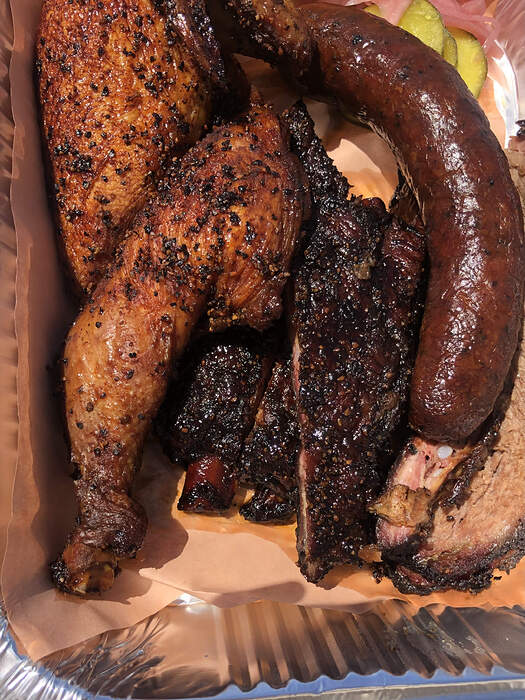 In case some folks missed it:
zippo1 posted the original link to the NYTimes article on Tejal Rao’s “CA BBQ” article. Matt Horn gets a good mention in it.

Not sure how to post a link to his link (plus it’s on the very long 2021 CA food news thread), so here’s the link again. NYT allows access to up to 5 free articles per month.

In Search of the California Barbecue Tradition

I just went for the first time this past Saturday. Indeed, this is world class brisket, @brisket44 ! Sublime. only quibble is it was a little salty - moreso than just peppery - but the deeply smoky bbq sauce helped. Our ribs were really good, certainly the best I’ve had in the Bay Area, although I really like the meaty/fattiness of Miss Lizzy’s Cajun Cafe ribs too (though they drown theirs in too much sauce).

I got there at about 5 to 11:00 - so before they opened - and didn’t leave with my food until 12:20 - helluva wait! I do wish they’d let you pre-order standard meal sized portions instead of only the big portions. My sister and I absolutely loved their mac-n-cheese - best side mac-n-cheese we’ve had at a bbq joint - and also the potato salad, which was very eggy and reminiscent of deviled eggs. I agree on the collard greens - no smoky/porky flavor, a disappointment. Their small-sized sides are easily shareable between two people.

BUT. almost the star of the show for me (besides the brisket, of course) was the banana pudding. my eyes rolled into the back of my head, and after letting my sister have a single bite, i devoured the whole thing myself.

i’m glad to hear the amount of time spent in line isn’t always as bad as it was this weekend - i really didn’t relish being in a line for 1 hr.-plus during covid/variant times, even though outside and everyone was masked (social distancing was not really all that distanced.)

it’s not cheap (i inwardly gasped - 1.5 lbs of ribs/brisket plus 4 sides was $120+tip), but it’s fantastic. i left most of the ribs/sides for my sister and the BF got to polish off most of the brisket last night. 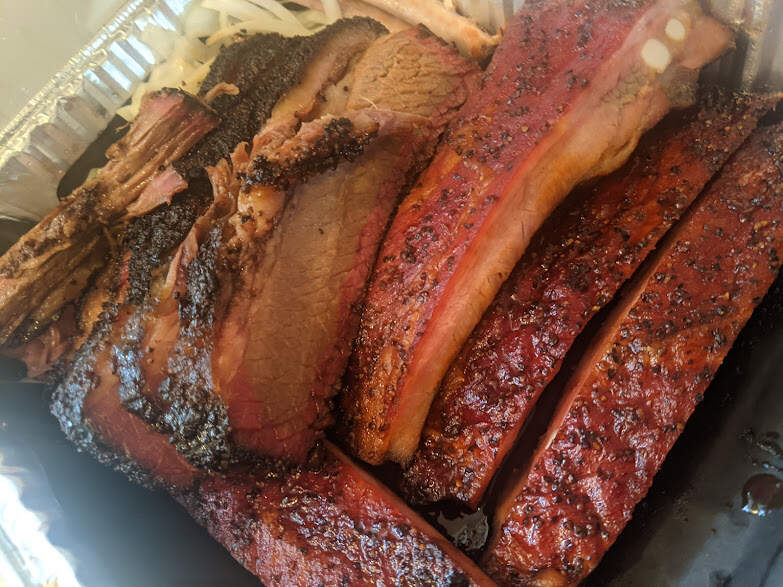 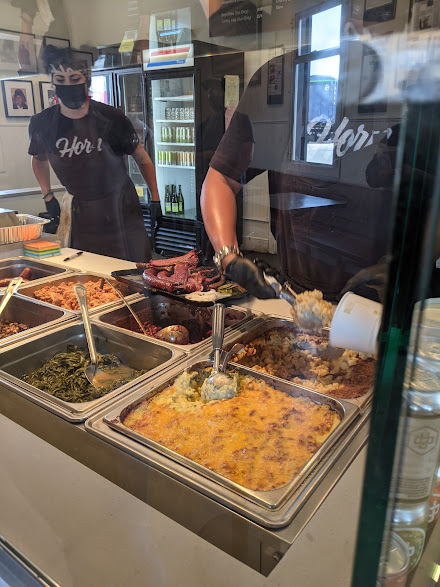 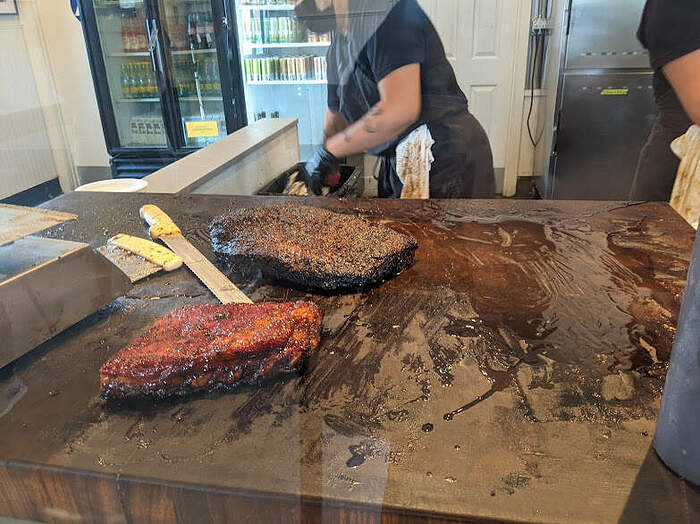 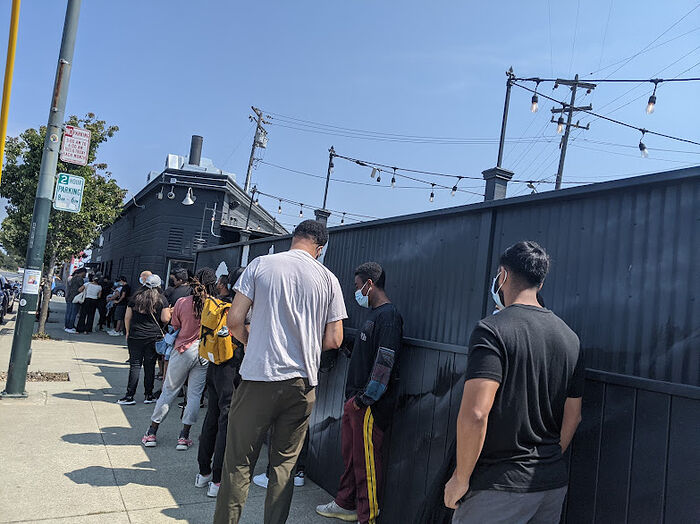 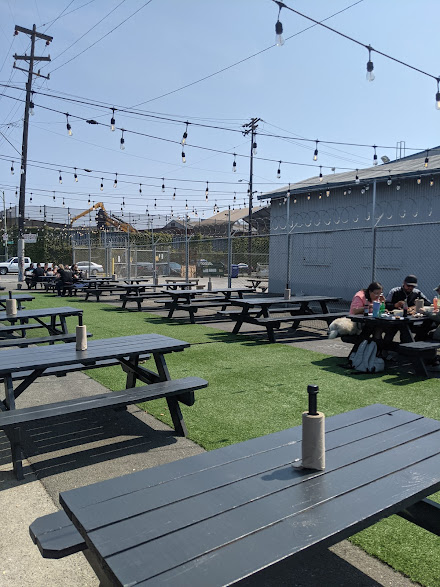 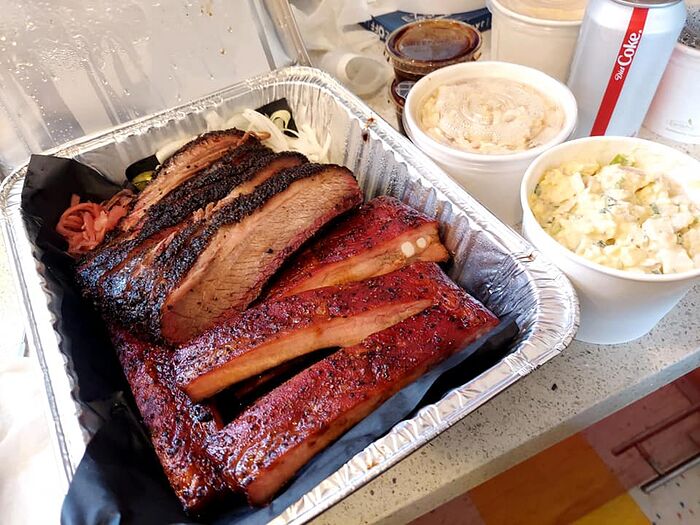 BUT. almost the star of the show for me (besides the brisket, of course) was the banana pudding. my eyes rolled into the back of my head, and after letting my sister have a single bite, i devoured the whole thing myself.

Oh yes, that banana pudding is fantastic. Though, I’d give the edge to the slightly more custardy version from Yes Pudding. (They’d been part of the Bayview Bistro, and are moving into the former Churn space on San Bruno Ave.).

I had a different experience with the collards than @brisket44 reported. The collards and other sides were intense and meaty. I suspect it was an artifact of going at 2pm on a weekday and getting the bottom of the pot (no line!!!, but out of some meats!!!)

Our ribs were really good, certainly the best I’ve had in the Bay Area,

Wow, compare the picture of your ribs to mine - they look like they came from two different restaurants. Maybe I’ll give them another shot, but will wait until I can see them before ordering.

thanks, i’ll have to check out the yes pudding version.

that is good to know about no line on a weekday! I’m in the east bay every Wed.

Yes, my experience of the greens was the same as Brisket’s, but it was the first batch. Maybe i’ll try it again later in the day.

yes, i saw people ahead of me getting them and they all looked great.

i’m not a person who loves the chewy “bark” on a rib (Smoke often has bark on theirs) and these had none.

I went 4 times last Spring and ordered just about everything on the menu. My preferences seem to be different from everyone elses.

Of the meats I liked the chicken the best. Tender with a nice smoky, hammy flavor. I had the beef rib two times. How can you complain about a phat hunk of beef the size of your forearm. I love beef ribs. I found the pork ribs to be too smoky. I had a brisket sandwich but don’t remember anything about it. The hot links are too salty for me. btw leftovers of any of the meat make a really flavorful broth for black bean or lentil soup.

I had one side that I really liked but only had it once and I think it was the cole slaw, which I normally am indifferent to. The potato salad was OK. The scalloped potatoes didn’t work for me. I really liked the bread pudding. Didn’t care for the banana pudding. It was no better or worse than the many I have tried to add potassium to my diet.

On my last visit I remember thinking that next time I would get chicken, cole slaw, bread pudding and maybe a beef rib. All my visits were on Saturday mornings. Used to be that the beef ribs were only available that day. You can preorder but you are restricted in what and how much you can order beforehand. I arrived an hour early at 10am, waited an hour and got everything that I wanted. When I left shortly after ordering, the line was longer than when they opened.

update on the collards. yes, i let them sit in my fridge all week (since Sat.) and they got so much better, much more flavorful. I doctored them up anyway, with a slice of bacon, eggs, and big splash of Frank’s RedHot. really good bfast. 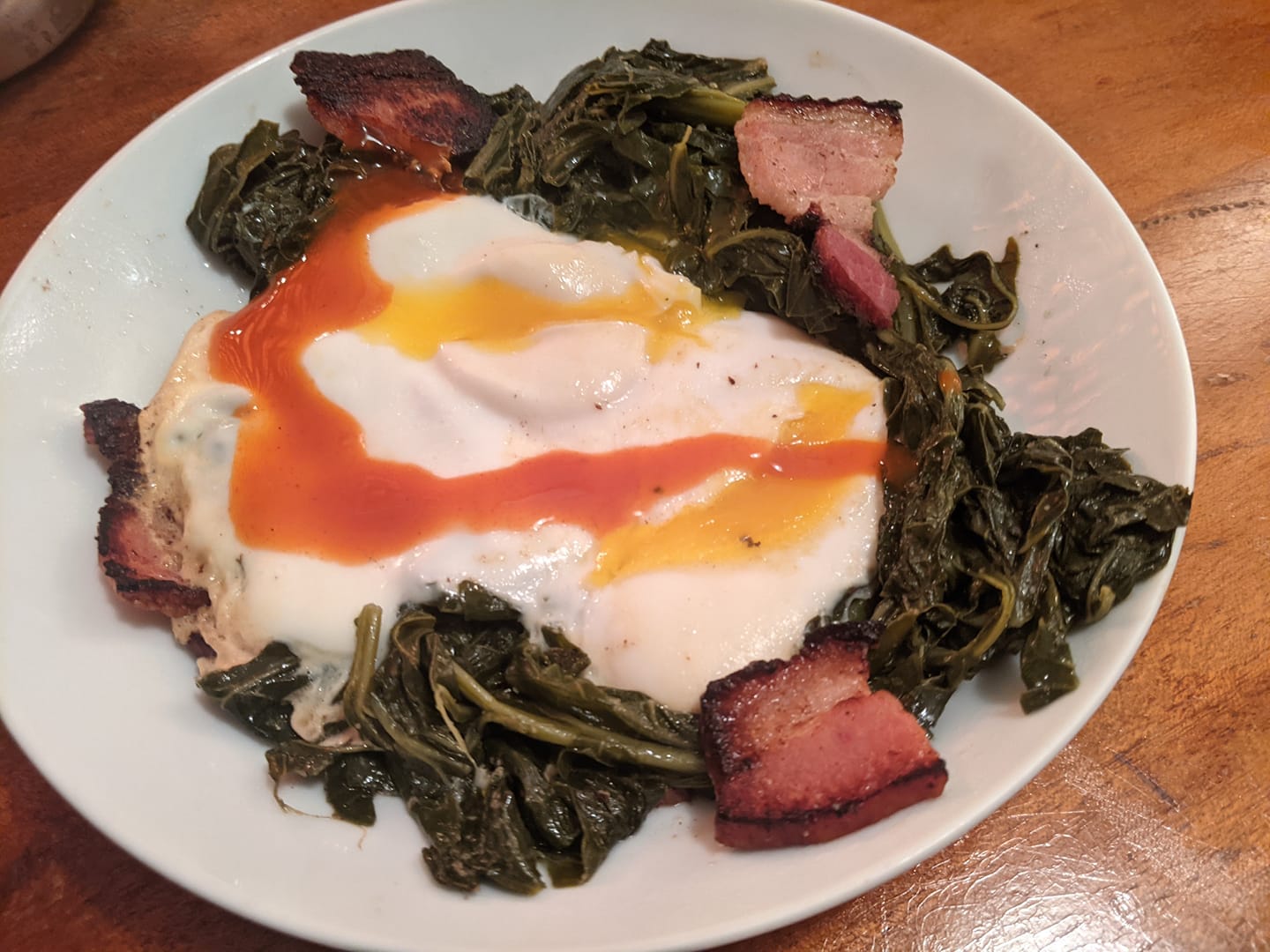 Forgot to mention that I really like their sauce. Tangy but not overpowering. Their meats don’t particularly need the sauce, but it goes well with ground turkey, poached chicken etc.

I don’t where else one can get a beef rib like theirs. I didn’t know they got so big. Very rich, beefy, unctuous and more than enough for a 2nd or even 3rd meal. The first time I ordered it I went to town too much on the rib and a hot link and wrecked my digestion. The second time I ate it in moderation and enjoyed it much more. 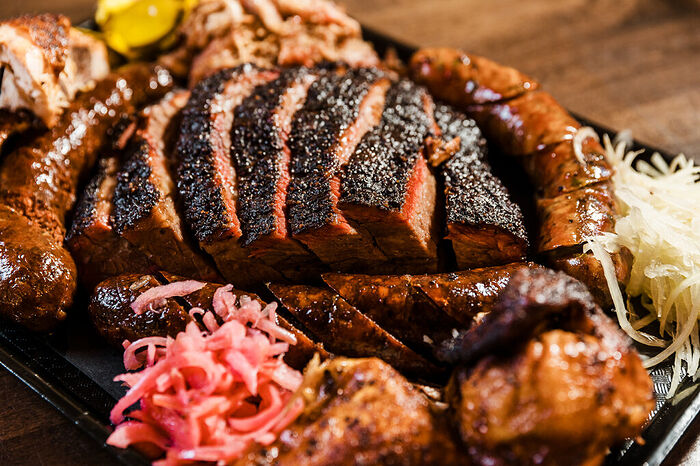 In West Oakland, Barbecue Is Back — With a Side of Fried Chicken

With Horn Barbecue and Kowbird fried chicken, the chef Matt Horn calls back to the neighborhood’s roots while bringing his own style to the pit.

I went almost 2 months ago and the ribs were a highlight for me. I would go back just for them.

4505 BBQ had an Oakland branch for a while in the Laurel district. Also served beef ribs, which the SF original does not have room to do. They were okay, extremely fatty, very smoky. 2 sizes, and yes, the large size was enough for 2 people!

Sadly, due to the lockdown, 4505 closed the branch site down. It’s now a branch location for Ghost Town Brewing, with a sandwich/fries take-out menu.