I am not really expecting a response to this inquiry since this is a relatively obscure Chinese cuisine from the Zhejiang province, but hey, why not.

The context behind the question is that, while I am aware of population from that area who immigrated to NYC (specifically, Flushing) in the 80’s (with the other hotspot for immigration from Wenzhou being Paris), I have not heard extensively about the cuisine at all despite the immigration. My speculation is that, because Wenzhou cuisine is not one of the large, well known Chinese cuisines (e.g. Cantonese, Shanghaiese, Sichuan, Hunan), starting a restaurant with a Wenzhou theme may be a bit risky.

I have had that cuisine sporadically growing up, and from primarily one or two sources. So my experience is certainly limited and can very well be biased by the limited number of sources. My impression at the time was that the dishes were often cooked with wine.

I did spot this picture from @Chemicalkinetics in the Golden Mall in Flushing that shows a stall with snacks from Wenzhou:
https://d3ibra4y67nfc2.cloudfront.net/original/1X/372be5ada2397a313bc481e3174686ff16afef4e.png
(Originally from this post:
Name your favorite NYC cheap eats)

I agree. I think a major reason is that Wenzhou cuisine is not one of major ones. However, it is more than the fact that it does not rival on the scale of Cantonese or Szechuan. Wenzhou (溫州) is one of the area in Zhejiang (浙江), and Zhejiang cuisine is quite famous. It is one of the top eight branches. Far more importantly, Zhejiang cuisine is largely contributed by other areas (like Hangzhou, Shaoxing, Ningbo) instead of Wenzhou.

Wenzhou is most famous for its large wonton.

Thanks for the response! This is one of those obscure topics that I seriously wasn’t expecting much in the form of responses. So I was surprised and delighted to get a well-thought out reply within half an hour.

Once I read your post I went back to look up the population of Wenzhou the city and its about 2 million. I guess compared to other Chinese cities, 2 million aren’t much and that shows in the cuisine’s influence.

Where can you get those large wonton? Are you talking about tall man wonton? I don’t think I have eaten it, only heard of.

Although Wenzhou is the most populated city within Zhejiang, it is also the poorest too. Hangzhou is almost the same size as Wenzhou, but Hangzhou has twice the GDP. No, it is not that poor compared to the entire country, but usually cuisine is driven by culture and wealth, which is why Hong Kong has such a large influence in Cantonese cuisine in the last 50-60 years. Before that Hong Kong was just a dot, and it had zero influence.

Is it still so? I only know that 30 years ago Wenzhou was a pretty small place. Since then I heard there has been a lot of entrepreneurial activities, and Wenzhou became, LOL, the shoe and cigarette lighter manufacturing capital of the world.

Well, I am sure it is a very populated place (since it is the most populated city in Zhejiang), but it has the lowest GDP per capital.

“Yummy Wenzhou Restaurant” is a new stall in the Fei Long food court in Sunset Park, Brooklyn. I haven’t tried it yet. I’ll try to attach a photo later.

Wenzhou is most famous for its large wonton.

Did a search- Golden Corner Noodles has a Wenzhou style wonton soup.

Yun Tian Lou Restaurant seems to have a few Wenzhou dishes according to people.

Cuisine certainly may be driven by culture and wealth, but I don’t think poorest is reason that Wenzhou cuisine is small. Most Wenzhou people, especially entrepreneurs, left Wenzhou and moved to Hangzhou, Shanghai, and any place in the world where has opportunities for profit. The place indeed is poor in terms of infrastructure and urban planning. Because Wenzhou, the place itself has been poor for too long. There is no natural resources, no geographic advantage, and no policy support from the central. In contrast, Wenzhou should be a rich place both culturally and financially. Anyways, there should be other reasons that cause the cuisine remains in small scale.

The Wenzhou stall that was in the Golden Mall is now a brick & mortar on College Point Boulevard in Flushing, and was reviewed by Jacqueline Newman in Flavor and Fortune.

I visited the stall in the Golden Mall in 2008 and sampled the fish dumpling soup. 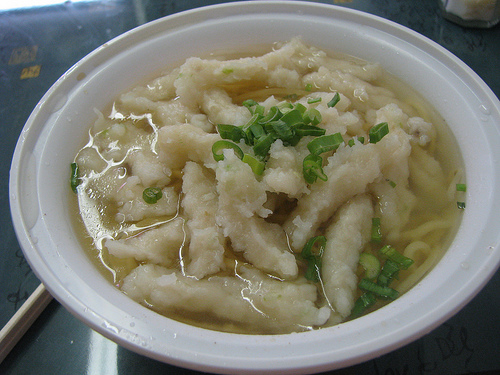 How did you like it? That was quite a lot of fish dumpling that they gave you. Were there wrappers with fish filling? Otherwise they looked like the fish ‘meatball’ in the San Jose discussion. The San Jose version looked less uniform with chunks of fish visible.

No wrappers, just solid fish “pellets.” My impression was that they were molded to roughly resemble fish. Don’t recall if there were chunks of fish visible (it was almost 10 years ago).

FWIW, this restaurant was reviewed by Jacqueline Newman as Gourmet Noodles & Delicacies, but is now known as Golden Corner Noodles.

What a wonderful reminder of the dish I had at the same restaurant and time period! I may print it out and frame it!

Checking my notes from 2010, I described the dish as “fish paste soup”.

Like you mentioned, a lot of Wenzhounese people immigrated to Flushing and there aren’t any large scale Wenzhounese restaurants, but there is this one place (41-28 Main St, Flushing) there are a set of doors near the corner across Sparkling Supermarket, near where they sell the Asian movies, and if you go down the stairs, one of the first few stalls you pass by on your left (probably second, but not exactly sure) specializes in Wenzhounese food. They have the fish pellet soup along with a variety of other things.

You mean located in the Golden Mall. A very well known place to those here, and it’s been on several tv shows. There used to be several maps to the stalls there. I haven’t seen those updated in awhile.

Yeah, and I didn’t know that it was on TV shows before. I know one of the stalls/restaurants inside is well-known, but not this specific stall.