Well what can I say, was walking around town tonight and decided to finally give this place a try. Fortunately / unfortunately for them, I’ve read so much about this place I had VERY high expectations.

I’m not going to say they dissapointed, everything was very good & fresh etc. but the place overall just isn’t my scene.

We walked in without reservation at 7:30 table for two. There were only about 5 tables occupied in the entire place, but we were told the only place available was 2 seats at the end of an 8 person table where 4 people would be sharing the table. Not sure if you guys can tell but I’m a rather social person so it didn’t bother me. We were seated, given the menus and greated by our server, bread and a chilled bottle of tap water was to follow. The menu is pretty limited, apparently it changes daily, so everything is “made to order”. There were 3 salads, 3 apps, 8(?) entrees of which half were pasta dishes. (Although I’m not completely avoiding carbs as I was previously, I’m still not ordering a plate of pasta) Of the 4 remaining non pasta options there was; salmon(yuck), pork chop milanase, chicken francese and something else I can’t remember. It was a toss up between the pork chop and chicken, the chicken won.

Wife had the beat salad and a pasta entree. I started with the chopped salad and both salads were large and fresh and very good. For $14. each I would expect nothing else.

The entrees came shortly after we were finished with the salads, no delay given the preorder warning for patience, we were served without much delay. Portion size(s) were ample, but not overly large, mine was very good, however I prefer a more “creamy” sauce where this was more broth. Not saying it was bad, just not my personal preference, it was also served with chopped sautéed onions and halved cherry tomato.

The pasta dish my wife enjoyed, but it didn’t knock her socks off either. I had one bite and it was good, no complaints. The table of 4 was seated shortly before our entrees, we only shared the table for 20-30 mins, no bother at all. The chairs are hard wood with straight backs, not very comfortable.

$85. For 2 salads and 2 entrees (one pasta and one chicken) and 1 iced tea, the place isn’t a bargain either. I wouldn’t refuse to go back, but I probably won’t seek it out again either.

I’ve been twice and wasn’t overwhelmed. Last time I stumbled in when walking around town with my friend and ran into this ribeye. Good stuff but not 50.00 good. At 40 it would have been more on point for value. 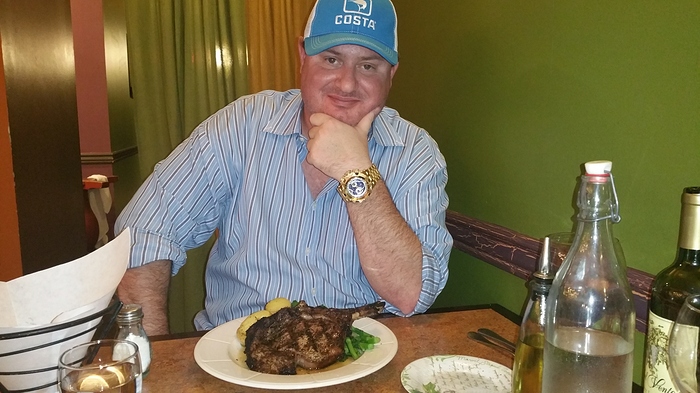 Funny I could have sworn you were one of the ones who suggested I tried Via 45. (Over at the “other” place)

Not me…it’s not bad, just not my scene and I didn’t quite connect with it. Then again, you and are are some discriminating eaters (and devilishly handsome to boot lol)

I like the Belmonte skirt steak. That’s a good dish for 24 bucks I think, considering skirt steak is like 15 a pound now

Jr we need a ribeye thread buddy! I think I’ve started too many threads. Let’s do it!

Guilty. I’m sure I’ve posted many times about how I like this place. I never posted they were a bargain lol.

The food is consistently good and I love the fact that the menu is always changing. BYOs with this kind of cooking are rare in RB.

Then again we do not go a lot.

It’s a decent place Seal. That is the reason why it’s usually packed. I just didn’t quite think it was my cup of tea. They are doing something right for sure.

For byob I like Angelicas in sea bright or Christines in Atlantic highlands.

Good point, I guess with my self imposed dietary restrictions the menu was very limited for me.

I think the food is good, even if the scene is a little fusty and the service idiosyncratic. The front of the house definitely needs work.

The first time I was here I had a nice conversaton with one of the partners. She was a very nice lady. This spot is a good addition to red bank. I can see why it’s always crowded and I’m glad to see some creativity in red bank.

Cheese and pear purse pasta - imo, a must have at Via 45. A standout dish.

(Love the avatar!!) yeah see I wasn’t looking at any of the pasta dishes. Like CJ I’m chalking this up to “its me not you” type scenario. It’s just not my kind of place, doesn’t make it bad, or their food bad.

We ate there again last night ( our sixth and last visit of the just ended summer ) and had another great meal. We sat outside and it was a perfect night for it. The lone busker sitting in front of Starbucks across the street played a surprisingly good variety of tunes. Lots of people were out and about from 8 pm to 10ish and Red Bank was transformed into a magical place.

We shared an excellently composed watermelon salad that had just enough ingredients. Ripe marinated pieces of watemelon coated with a mild goat cheese and mixed with red onions was so good we finished every bite.

For mains we shared the excellent and different pork milanese. Instead of a pounded thin chop, they served a thick, juicy, perfectly cooked chop that was complimented by a light, fresh salad. We also had a special of cod francais that was good but nowhere near as good as the pork. Dessert was a slice of their almond and fruit cake that was light and delicious.

Via 45 is still one of my favorite restaurants in Red Bank.

That sounds like a beautiful night Dave. I’m glad you enjoyed everything. The weather was stellar!

Timely post for me. Have a reservation this week!

Via 45’s statement that the menu changes daily is no joke. My visit was less than one week after Seal’s visit and not one item Seal ordered was on my menu (and I would have probably preferred Seal’s choices). I was surprised to find two chicken options (parm and francese) and two fish options, but not one meat option. I think it’s my first ever visit where some variation of the milanese dish was not offered. Still, the meal was solid as usual and the service warm and friendly. Would probably frequent more often if securing a Fri/Sat ressie weren’t so difficult.

Would probably frequent more often if securing a Fri/Sat ressie weren’t so difficult.

SERIOUSLY. We have a running joke about this at our house. “Let’s do Italian tonight. Call Via. Oh, no reservations for a Saturday night for 4 weeks. Ah…”

True about their lack of availability on weekends. Some people have standing reservations for every weekend. Next time @jsfein try the chicken parm if you haven’t yet, it is maybe one of the best versions I’ve ever had.

We’ve never been to Via45. Not that we’d ever go on a Friday or Saturday (in NJ, we dine out mid-week), but I was curious to see if they are truly fully booked on those days, so I checked. For tonight (Fri., 9/27) and tomorrow, Resy shows availability for 2 people both nights from 8:15 p.m. through 9:30 p.m. So, the complaint about not being able to get a table makes nonsense to me.

It’s dining before 8:15 pm that is the challenge at Via 45 on weekends. My ressie last night was for 8 pm. We walked out close 10 pm and I was barely awake. Nabbing a “prime” 7 pm dining slot usually takes 3-4 weeks advance planning.

It quite reasonably seems that what is “prime” varies by individual and venue. My wife and I are late diners. 7pm for us is too early. Like most things - YMMV.