Just starting to research a little but I was wondering if anyone had an idea of projected Induction cooktop use in the States say 5-10 yrs out?

The technology hasn’t caught on in the US like in Germany or Japan, but why exactly? I know Natural gas reserves play a big part as does personal choice. More Induction usage in rural areas maybe, so you don’t have to use Propane. What about densely populated metropolitan areas, are there more Induction cookers there?

A few numbers Iv’e seen on posts are 3% need Induction 7% use it in USA and then in say Germany. 17% households use it.

Where can I find more numbers of type of stove usage in households? and number of Induction, Gas, and Electric units sold in USA?.

Search, you should, at Association of Home Appliance Manufacturers…

Are you wondering about resale value?

Resell value of what? Induction cookers Gas ranges no. I am a little heavy on Copperware though right now, and I can’t seem to help myself I just keep collecting it.

Just thinking a little about my investment in the future and for the most part I feel ok and don’t think that Induction usage numbers are going drastically anytime soon.

People still like cooking on gas when they can and electric is also good for Copperware.

I meant are you thinking about installing induction and wondering if it will effect the resale value of your house. Sorry I wasn’t clear.

I don’t know why you would worry about induction if you have all that copper. Guess I’m confused.

Well because Induction doesn’t work with Copperware unless you want to pony up for $$$ De Buyer Prima Matera that has an only adequate 2mm thickness with SS lids for all that moolah.

I know that. But if you have all that copper why would you be wondering about the numbers forecast induction? Totally confused.

Again copper doesn’t work on Induction and I have a lot of it, kind of self explanatory really right? I don’t want my investment to become obsolete.

The big copperware mfg’s are still making it in part because they know they can sell it in the large US marketplace that has plenty of Natural gas reserves and most every home or restaurant chef would prefer to cook on gas.

However in places like Europe and Japan I would think Copperware sales/value must have dipped some, Induction has a small but growing but not insignificant market share in those places.
So I would like to research Copperware sales a little in US and Europe as well as Induction numbers in both regions and Gas/Electric range sales in the States also.

Oh, so your copper is an INVESTMENT. Now I understand.

Yes Copperware is an investment. that stuff is downright expensive. Especially on my budget. But like I said I kinda got a little carried away because I like cookware. Apparently because I also like sales on cookware. Internet surf/shopping is dangerous on a budget and can be addictive.

So I want to have my regular large set of mostly SS with some ECI and Ceramic. And I want a a smaller duplicate set in Copperware. Pretty much done already except for a few small tweaks. Thats what I want because I am into it and want to keep it for awhile.

So I have over that and want to pare down. Whether keeping it for myself putting some it up on CI or ebay I still consider it an investment.

I may have to switch from gas to electric at some point because I don’t plan on staying in my current apt much more that two years. I think that when people don’t have the option of Gas and have to go with either electric or third option now Induction, that more and more this is becoming a choice between electric stove and Induction top/PIC.

The way i’m thinking if you cant have top choice gas, then choosing between Induction and electric is a tougher call.

If I ever ended up in a place long term where I couldn’t get gas, or a large electric stove didn’t make sense and I had to go fully PIC Induction or something, Then I would sell my copper from personal set. I wouldn’t want it just sitting around for a bunch of years.

It is unlikely that gas will be obsolete in your lifetime. Even if natural gas become obsoletes, there are still other fuels. Induction is only one type of heating among all other electric hobs. It is unlikely that you cannot find a stove which will work with your copper cookware 30 years from now. You won’t be forced out.

That being said, if there is an obsoletion to speak of, then it is more likely due to your own decision. Induction stoves are likely to get better and better and cheaper and cheaper. There may be a point in the future that you will find that a cladded cookware on an induction stove become so attractive that you may give up copper on gas. I am not saying that will happen. I am just saying this is a more likely scenario than being forced out.

Good comments, CK. But I’ve been shocked to see that induction ranges have gotten A LOT more expensive since we bought our last one about five years ago. No clue why. But, yeah, I agree that gas cooktops aren’t ever going away.

More likely, there will be an advance that allows “all metal” induction to obsolete what is now sold.

That too.Unfortunately, if I remember right, the induction energy transfer for aluminum and copper will be much lower energy efficiency. If this is true, then the incentive to develop it will be low.

When I was exploring the idea of induction cooking, I stumbled upon this site:

I used that site as a home base for exploration for many months. 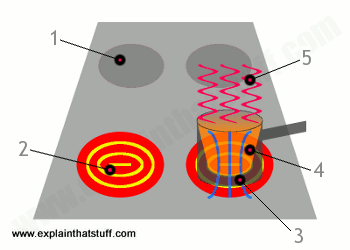 How do induction cooktops work?

An easy-to-understand introduction to induction cooktops and how they compare with other methods of cooking.

For a glimpse into the future, you might want to look at inducs website–a Swiss company recently purchased by an American company in Manitowoc, Wisconsin:

The only thing that cites any specific survey evidence of usage frequency that I’ve found is pretty crappy and old (before 1910):

The Pros and Cons of Induction Cooking

With its energy efficiency, kitchen geek appeal and growing reputation for power and precision, induction cooking may be the iPad of the kitchen.

Hope this helps your investigation.