Has anyone visited the “Singapore-influenced hawker-style” market over on the west side yet?

I’m indifferent to it, save perhaps for a chili crab or an es kacang, though I really want to cavil about the press hailing it as a bastion of “Singaporean street food.”

If any of those folks has ever visited the city-state, they’d know that it’s not the type of place to tolerate street food In my 20 or so visits, I’ve found a random durian ice cream wonder bread sandwich along the road, and that’s about it.

On a lighter note, will there be little tissue packets sold so that patrons can chope a seat?

I’m indifferent to it, save perhaps for a chili crab or an es kacang

You’ve tried it? Tell us more.

It’s in soft open this week. I’m aiming to go check it out, but if I don’t get there before the official opening I’ll wait a few weeks for the hype to settle.

If any of those folks has ever visited the city-state

I don’t think anyone is trying to exactly replicate a visit, no more than vendors of any other kind of cuisine here do.

Oh, no I haven’t been, for I’ve been in Japan for the last couple of weeks. But if you do go, please let us know how it is.

It’s not about replicating a visit, it’s more about the uneducated description of Singaporean hawker centres as “street food.” Street food isn’t quite a myth in Singapore, but it almost is. Hasn’t been around in such quantity for quite a number of years.

Eh, i don’t think anyone is getting hung up on marketing descriptions

I walked through on opening day. It was mobbed so I didn’t actually try anything. With the paucity of choices for lunch a lot of people were checking it out. I have not been to Singapore but my impression is that it’s very inauthentic unless Singaporeans eat a lot of vaguely Asian themed burgers. I might try again today as it’s Friday and far fewer people are at work.

I went today for lunch.

These are the vendors 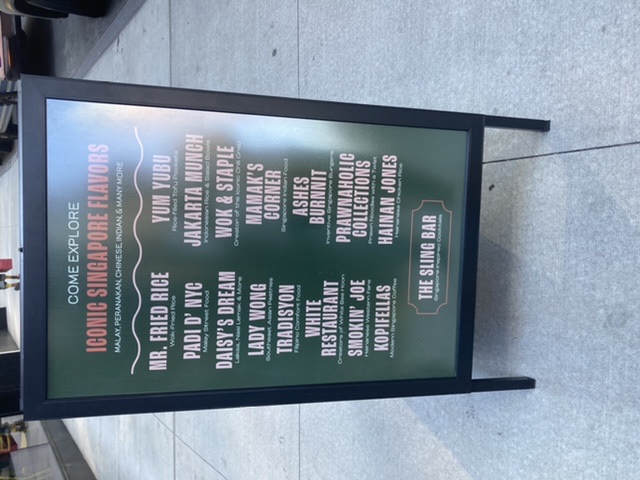 Some of the kiosks are empty and others haven’t finished setting up their spaces. Will write later about my lunch.

“Street food” is the widely used term within Singapore itself, even though such vendors have operated almost exclusively within hawker centers for many decades. A less common term in neighboring Malaysia is “stall food,” which captures the idea of fixed premises but just doesn’t have the same ring.

During the soft opening this past Wednesday, the food hall was slammed, and what food there was, was probably not at its best. I’ll give Urban Hawker a couple of weeks before diving in again, although I might drop by the coffee vendor for kopi O, kaya toast, and a half-boiled egg. Hard to muck that up.

I also stopped in on Wednesday, since it is really close to my office. It was nuts. I did get somethings. Lady Wong and Kopi are good to go. I rally wanted that chili crab, but that one was not open. I might give it another try next week.