Used to be (60’s, 70’s) SoCal and they were a staple at every meh eating establishment (Bob’s Big Boy, Denny’s etc) and most mom-n-pop diner/family/lunch counters. Used to be a lot of diners in the little towns that make up the greater LA area.

I think so. Grew up in CA and can’t recall seeing either on restaurant menus (still don’t ) and my parents never made either at home.
We ate more quesadillas than hot sandwiches

Yah, I think what @jammie is reminiscing about (not in any kind of nostalgic way

) is a sad simulation of old-school diner food that Bob’s and others put out, because they’re a “diner”. But the origins are in places like Baltimore, as mentioned; where it’s a more thoughtfully prepared (don’t laugh) menu highlight.

I like the English muffin idea or thick white, or any bread that’s on hand when at home

. But at a diner, all melts should be on rye. That’s my humble opinion.

Nice to meet you guys!

[quote=“Babette, post:14, topic:9167, full:true”]
Never had one, always thought it sounded super weird. And yet, I love anchovy pizza so maybe a fish and cheese sandwich isn’t all that scary. I’d still have to skip any mayo though, that’s a deal-breaker.
[/quote]This is probably not the sandwich for you. Mayo is definitely “a deal-breaker”… like it’s not a tuna melt without it (not a classic one anyway). But that’s okay. You’re not missing much. I

a good tuna melt. But, it is fat on fat on fat. Stay healthy my friend.

P.S. I love anchovy pizza too.

Some of the quotes in the article were a crack-up!

TC, I don’t feel all that old (isn’t 58 the new 55?) but in California years I’m p.f.o.
It is hard to imagine the SoCal of the 1960s, so much has changed. Even the Bay Area was pretty sleepy, food wise, except for the ethnic communities. I knew one native Californian. One! Everyone else blew in for jobs in the defense industry, etc. I got the impression that the old diners were owned by and served people from the mid-west or the east coast. They were already exercises in nostalgia. (And the one native I knew was a child of Dust Bowl parents - so many of the Greatest Generation came post-Depression and then WWII era, bringing with them their pyrex casseroles and obsession with pimento cheese.) The New Yorkers I knew obsessed about how the delis of Hollywood were or weren’t authentic. My parents were timid diners and gravitated toward the chains because they could understand the prices. I think the old SoCal tuna melt was on light rye w/American. (As far as we kids were concerned, Mexican food was our only hope and salvation!)
Sorry for the disquisition. Every time I go back to Cal I’m amazed at the wonders. My home experience in the sleepy little towns of the Inland Empire was much closer to MFK Fisher’s Pasadena than the current model.

Have you tried sardine on a pizza? Had some in Croatia it was fantastic. Often I’ll buy a ready made
Margherita add tinned sardines and extra cheese and reheat.

Sourdough grilled cheese sandwiches were a mainstay of my childhood, where i grew up there just weren’t- and still aren’t- any diners the way you find them on the east coast.

When we would go up to san francisco i remember there was a place famous for their french dip sandwiches and somewhere else with tri-tip sandwiches, those were more popular as hot meal sandwiches at casual restaurants. Rye and marble rye were unusual and scarce as a kid.

[quote=“jammie, post:26, topic:9167”]
Sorry for the disquisition
[/quote]No apologies. That was really good

[quote=“Ttrockwood, post:28, topic:9167”]
When we would go up to san francisco i remember there was a place famous for their french dip sandwiches and somewhere else with tri-tip sandwiches, those were more popular as hot meal sandwiches at casual restaurants. Rye and marble rye were unusual and scarce as a kid.
[/quote]You know, I think you’re right. You can definitely get dips and beef sandwiches in the east. But they do seem to be more popular here in L.A. & S.F.

Okay, I couldn’t help myself… 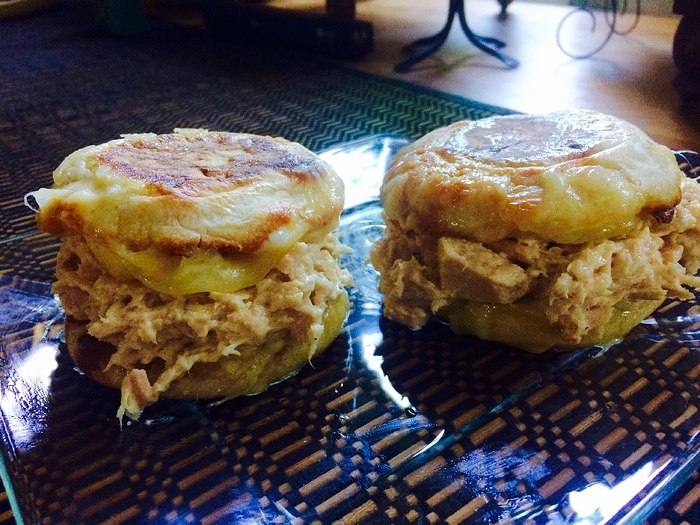 It was messy and yummy

I like chopped dill pickle but sweet pickle/relish is a no no for me!

Capers and or olives are regulars in my tuna salad.

I like chopped dill pickle but sweet pickle/relish is a no no for me!

Agreed, sweet anything has no place in tuna salad. I’m fine with sour pickle, olives, capers, etc. - anything salty-savory, but no sweet. I have even seen raisins in tuna salad - cringeworthy!

Agreed. I wonder what that’s about. I sometimes like sweet stuff in my chicken salad: apples, dried cherries, cranberries, even raisins in curried chix salad. But in tuna? Nooo sweet stuff.

Herewith, a contrarian vote for sweet relish in tuna salad. And on occasion, a sploosh of ranch dressing.

Live and let live. You see, I did put sweet relish on my husband’s.

Had a craving the other day. I tried to manipulate the cheese like @biondanonima suggested, but all I had was fresh mozzarella. It was looking good for a while, but when I tried to lift it, the cheese was just too stringy/watery to work with. I managed to salvage it somewhat. I will try a harder cheese next time. I used a brioche-style bread, which is kind of like cheating, so it was still a good sandwich. 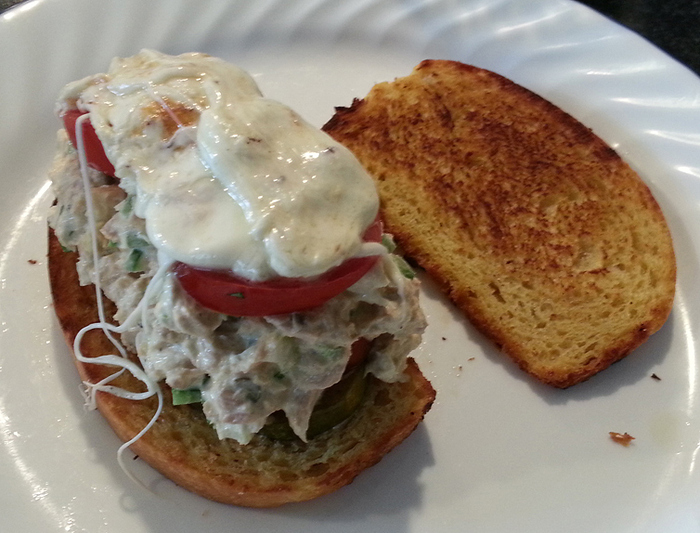 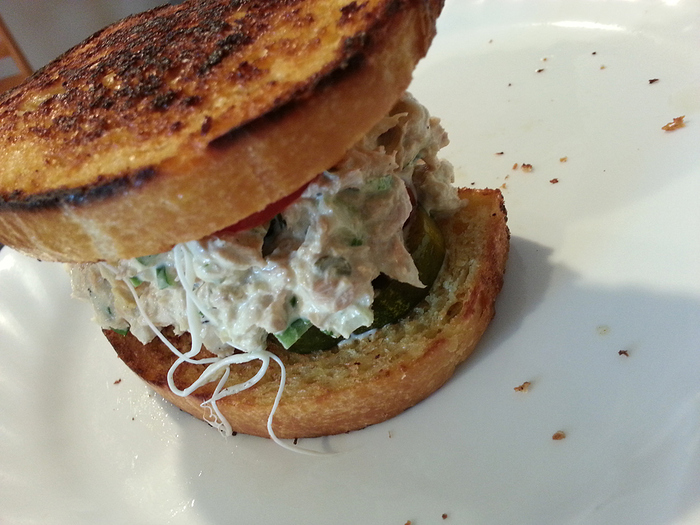 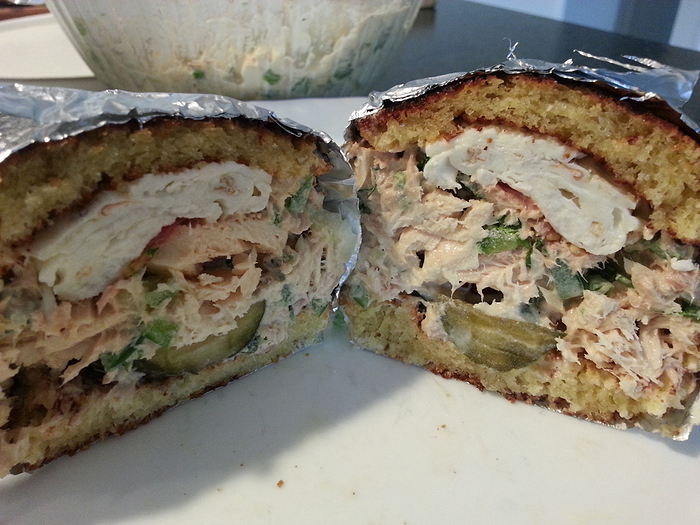 I tried to manipulate the cheese like @biondanonima suggested, but all I had was fresh mozzarella.

Fresh mozzarella is not a great melting cheese - it has so much moisture, it just turns into a puddle+a stringy mess. I don’t even care for it on pizza, despite purist assertions that it’s the only proper cheese for an authentic margherita. IMO low-moisture or “aged” mozzarella is far superior. Your sandwich still looks delicious, though!

I have always seen tuna melts served open-faced. Perhaps because the filling oozes readily. I wonder if there’s a “rule” on their presentation.

By the way, another option is to mix tuna with mayo, relish, and shredded cheddar. Spread onto toast, then broil.