I like these too, but they are verrrryyyy crumbly

Thanks. My nyc store apparently got just one shipment, and sold out citywide before I thought to pick some up.

But I managed to get a few by calling the store near my aunt just before I went up for thanksgiving.

Belatedly realized this is probably the same as Sabatino’s Truffle Zest on Amazon, which is priced about the same per oz.

Also picked up a few of the Black Truffle Sauce in the same section.

Yeah, come to think of it they make a mess unless you’re eating them over a plate or something.

They have carried the caramelized onion cheddar for well over 15 years. It’s always on my TJ’s shopping list. 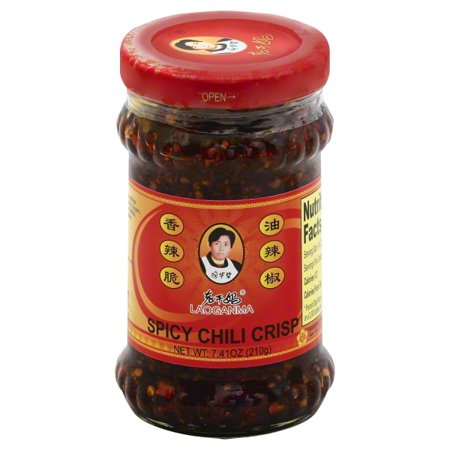 But there is a Japanese product that is even better than the Lao Gan Ma spicy chili crisp. It’s a Crunchy Garlic Topping by S&B. (Also called S&B Layu Chili Oil with Crunchy Garlic) This stuff is amazing! It’s not as spicy as the Chinese Spicy Chili Crisp, but a depth of flavor that is addicting. It’s a smaller jar, but at a good price. So good I can eat it plain, or over noodles or rice. I like to crisp steam broccoli or other veggies, then toss with a spoon or two the Crunchy Garlic Topping, a little soy sauce or tamari, and if needed a little cayenne powder. Some black bean sauce added is very good too. A great side dish, or even a main meal. Also great added to a decent commercial ramen. 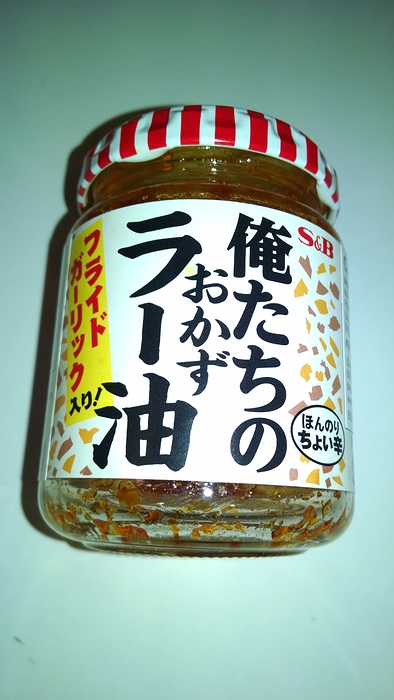 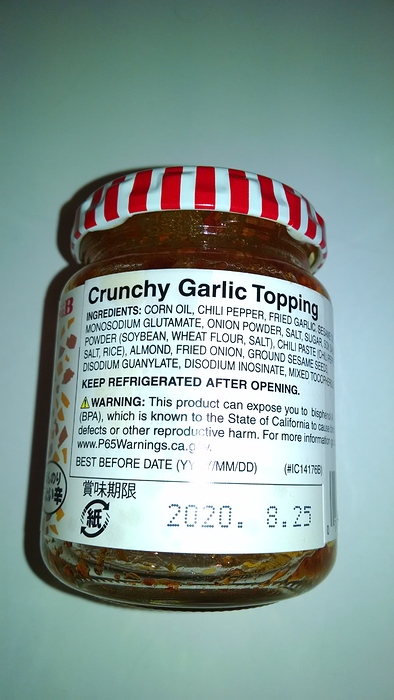 Crunchy Chili Garlic rear.jpg2432×4320 2.27 MB
I read that the BPA warning is generic for legal reasons, because of old jar tops Japanese producers used to use, but haven’t in over a decade. But California still requires the label. From Wikipedia- “Between 1998 and 2003, the canning industry voluntarily replaced its BPA-containing epoxy resin can liners with BPA-free polyethylene terephthalate (PET) in many of its products.”
A link to an article.
Japan listened to BPA warnings

A link to an article I just found.
Epicurious - “The 5 Best Chile Crisp Sauces You Can Buy Online”

I want to be able to find these later. Thanks HO!

Spicy Chili Crisp Sauce with the “angry lady” on the bottle is amazing! Thinking of making my own. Here is the serious eats post I have a great quantity of dried shallots, dried garlic, and dried mushrooms, in addition to dried chilies. One recipe seems to be saying the purpose of frying is to “dehydrate” the shallots and garlic. Any thoughts or suggestions about using the dried? Freeze dried shallots http://wholespice.com/shallots.html Garlic slices http://wholespice.com/garl…

Thanks for the recommendations @mq7070! I just purchased the Lao Gan Ma spicy chili crisp, as well as the S&B Layu Chili oil with crunchy garlic, through Amazon, and am looking forward to trying them out.
The TJ chili onion crunch is good, but not very spicy, and does taste similar to Goodman’s onion soup/dip mix as someone stated in an earlier post.

The sheer amount of salt in spice mixes should get your attention. We don’t buy mixes at all anymore. First on the list. You can’t taste your food.

Lots of fans of it here.

Completely different product than laoganma or other Chinese chili crisp.

I saw a box of four spice mixes/rubs at the store this week - very tempted, I’m sure they’ll be gone in a blink.

One had chili, shallots, garlic, etc - to be added to olive oil for a bread dip. Another was spicy honey mustard, add oil for a protein marinade. Two more - one sesame and other things, likely Asian leaning, and the last was steak and protein related iirc.

Forgot to take a pic. Will post when I buy (it they’re still there).

Count me among the fans. I’ve been using it as a pasta sauce, either using a spoonful for over easy fried eggs to top the pasta or just mixing it with a little pasta water and tinned fish for a one pot meal.

box of four spice mixes/rubs at the store

What part of the store? I only started going recently, and don’t seem to have much patience for it yet. Is that wrong?

The sheer amount of salt in spice mixes should get your attention. We don’t buy mixes at all anymore. First on the list. You can’t taste your food.

Generally I agree, but salt is necessary in a mix advertising umami—- the sense of umami benefits when glutamates (e.g. from mushrooms) are in presence of sodium, and in fact certain neurons only fire when those both chemicals are present.

I haven’t used the TJ’s umami mix in otherwise Asian recipes, but in more western dishes, I prefer the TJs version to Imperial Brand “mushroom seasoning”, which has mushrooms as the first ingredient, salt second, as well as sugar, soy protein isolate, and yeast extract.

but salt is necessary in a mix advertising umami

There is more salt than mushrooms. That just isn’t okay.

Mrs. P tried the cornbread bites stuffed with pepper jack cheese and Serrano Chile peppers while at TJ’s and gives it 2 thumbs up. She picked up a couple of boxes. I have yet to try them. They look good, but certainly not dietetic 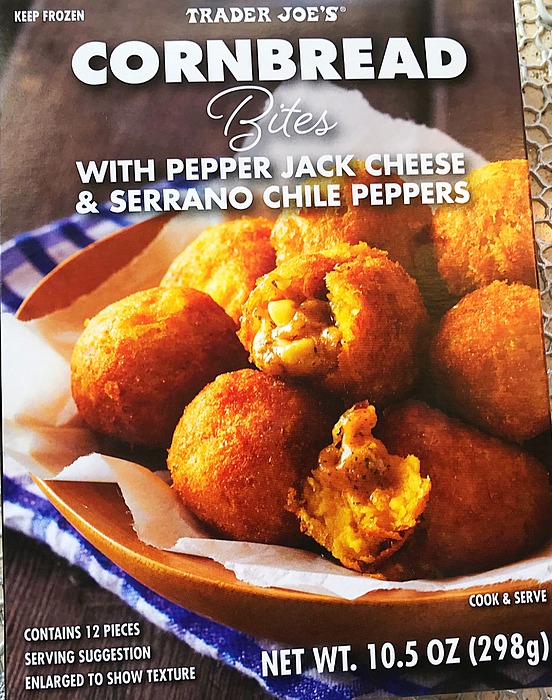 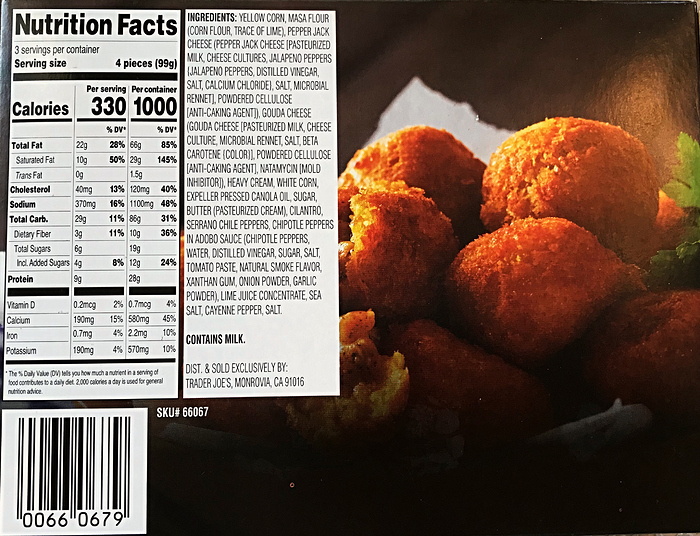 @Shrinkwrap, I find that TJ’s locations have varying floor plans. But there are always Hawaiian-shirt-clad clerks about, more than happy to direct you to any item you ask about. Matter of fact, unless you specifically tell them you just want to know the general location, they will lead you to the precise item, and often, ask if you’d like to sample it.

don’t seem to have much patience for it yet.

That’s about how I felt when I started going. I treated it the same way I do specialty markets at the beginning, not a regular grocery store.

Now it’s one of my regular grocery spots, so it’s easier - except one of their “things” is to periodically shift everything around so people get out of their rut and change their path through the store to discover new things. I have to say I get incredibly annoyed the first fewer trips after this, because it inevitably happens when I’m in a rush and in for a targeted shop not a wander

Treating it as I do my asian or indian or middle eastern shopping adventures puts me in a much better frame of mind for it!

And yes, even aside from the product offerings, incredibly helpful staff - they’ll guide you places, look in the back, and even send someone to pick up things you forgot while you’re checking out. So to me it’s been more than worth it to “get used to” them.

Here’s another Cornbread Bites review from the What’s Good at Trader Joe’s blog. I haven’t tried them yet but intend to soon! 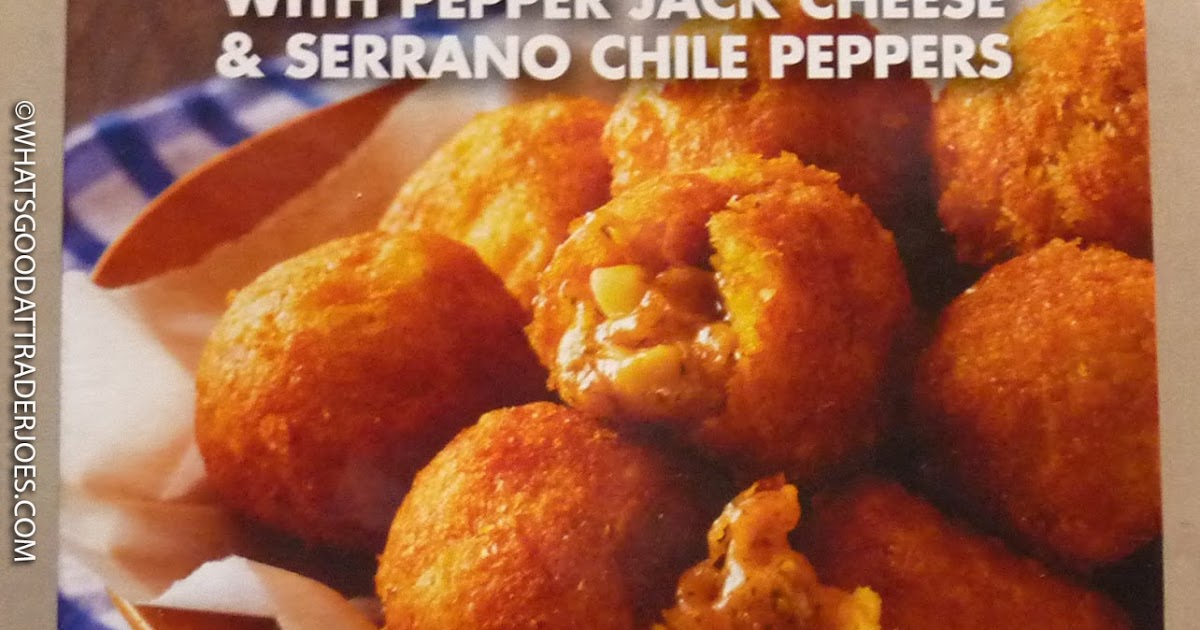 Cornbread bites feel Thanksgivingy enough. I mean, we had some with our Turkey Day meal, and they were hearty enough, heavy enough to pair...

Re that review… I may have posted here that my experience of the bites leaking was the same. It’s likely that the cheese gets bubbly and breaks through the corn meal. It’s happened both times (I had half the box on two occasions. The first time 4 leaked and the second time only two. It’s not a big thing but could be an issue if you’re serving them to guests. Bottom line was I really enjoyed them… leaks and all.

I tried them tonight with some TJ’s Zhoug sauce which gave it a nice little kick. It didn’t look anything like the package, and there was some cheese leaking out, but it was still very tasty. I might not serve them at a fancy dinner party, but they are fine when you are home alone, especially with the Zhoug sauce.