I’m going to add the burger at McCann’s Tavern in Belmar. Separate of the fact that they were 1/2 price (Mondays, iirc), I kept saying it was one of the best burgers I’d had in a long time. Don’t let the dive exterior scare you off (if that sorta thing scares you off); it’s nicer than you’d expect on the inside, and as I said, the burger was outstanding!

Really? Why are we bringing these pay to play sites lists here to our new home? You know I love you jr, but please. You do know what jersey whore in motion is right?

Ha! I was looking at the list and thinking this must be the Central NJ version of NJ Monthly…always raving about advertisers. Thanks for confirming what I’ve seen on their Twitter feed, Seal.

Now then, someone tell me if I’m right aobut that burger at McCann’s!

McCann’s is one of the classic, Mon/OC “burger grilled behind the bar” joints. A few other places of that ilk are: The Pour House in Tinton Falls, Frankie’s in Point Pleasant, Harpoon Willy’s in Brielle, Barnacle Bills in Rumson, etc. You can count me as a fan of all of 'em.

I will admit to chuckling about your comments on McCann’s exterior. Truth be told, they’ve cleaned it up a lot in the past couple years - aiming for that “roadside County Claire pub” look they presently have. The interior has indeed been improved - benefitting in no small part from the removal of about three inches of nicotine resin. Although, back when the place was still embracing its dumpiness, there was a pool table and a killer jukebox - which, coupled with the BOGO burgers, made it a fantastic spot to while away a rainy, Monday afternoon.

I’ve had the burger at The Pour House and I’ve got to say, besides being a flame grilled behind the bar, the next best thing (in my humble opinion) is the stout beer cheese “sauce” they have. Too much can be overwhelming, but just the right about of that rich stout flavor really compliments the flame charred burger, add some sauteed onions and now your talking. I don’t care that much for burgers, but that combination does get even my juices flowing.

New avi there my friend? Aren’t you the happy lil BLT.

Speaking of which, I made some BLT&Cheese lettuce wraps the other day, good eats.

Yeah I decided to ditch the photo of me making Thanksgiving dinner. I’m on the lookout for a cool, cartoon ham. That somehow seems right.

As to the PH, you may be right about the burger, but there’s just something about the harmony of setting and product that makes my belly smile.

We usually don’t go out for burgers in NJ. However, a few years ago, when our kitchen was being painted, we had lunch at the Manalapan location of Five Guys. Horrible burger! And terrible fries. In January 2014, the heat went out in our house, so we stayed in a motel in Freehold. The All Seasons II diner was right next door. We had the burger there. I was surprised at how delicious it was. Excellent onion rings as well. 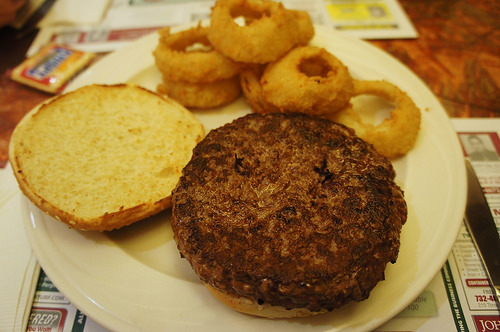 That picture doesn’t really do the burger much justice in my opinion, but I’m very glad you enjoyed it none the less. I think we have discussed in another thread, The All Seasons in Eatontown, is my favorite local diner. (obviously with not a lot of competition in the area)

5 Guys is one of the worst burgers I have ever had. Personally I would prefer a Mc Donalds burger to any that 5 Guys has. I have realized the reason why I despise 5 guys is because I’ve only had their burgers to go, which they take hot off the grill and immediately wrap in foil. This process steams the toppings, and the bun(s) into one mushy mess, by the time you get home to eat it. Who wants a steamed tomato and lettuce on a wilted bun? Not very appetizing to me.

@NotJrvedivici, Yes, I think my first post on this forum included mention of the All Seasons II burger. I didn’t take a shot of the burger cut in half (we shared it) which would have shown that it was cooked to our specification, i.e., medium rare.

Trust me. Eating the Five Guys burger there didn’t make it any better. Honestly, I would never take burgers to go. When we’re in the city, the only place we order delivery from is Sarge’s. Not for a burger but for their superb pastrami. I don’t order it as a sandwich no doubt that by the time it reached us, the hot meat would make the rye bread a mushy mess. Instead, I order the meat by the pound and get several slices of bread separately.

As for Mickey D.'s, it’s been eons since I’ve had a burger there, and that would have been a Big Mac. When we occasionally stop to one on the road when we’re traveling or the one near our house, I always order Chicken McNuggets, which I’m not ashamed to say I like a lot.

This is a totally different kind of burger from what people are used to, but Rt 66 Grill (Long Branch on Rt 36) has reopened. I never had their burger from when they were last in business so I don’t know if anything has changed, but I gotta say I really enjoyed it. It’s the like Cold Stone Creamery of burger joints, they will “mix in” things into the burger, like onions and bacon. Nothing like what I normally expect in a burger but a great change of pace!

Reopened as of when? Funny I saw a location for sale/lease on Craigslist that I could have sworn was this location. Come to think of it I don’t recall if the ad said it was operating or not.

Here isn’t this it? Looks like what I remembered it to be.

Jesus Christ tell me they went out of business again. I ate there about 3 weeks ago, the ad was posted 2 weeks ago.

I know nothing about the restaurant biz…is 160k for a place like that fair? I think we should start a restaurant together.

Depends if its operating, if it is and its generating a profit it could be worth it, if it’s closed than you are buying the build out and equipment.

I wasn’t considering it, but I thought I recognized it from the picture. I remember seeing it was closed over the summer sometime. I haven’t paid that close attention to it.

Strange. So it looks like they have gone out of business but that decor doesn’t look like the one in this picture. http://www.yelp.com/biz_photos/route-66-legendary-stuffed-burgers-and-more-long-branch?select=m5jdMtHhRoIXd9TuiqsB9A (Red and yellow as opposed to red and chrome)

I wonder if the place in the picture is that burger joint that popped up on Brigton in Long Branch. Rocky’s. Yep that is it. http://www.yelp.com/biz_photos/rockys-new-jersey-grill-long-branch?select=mLfrx1b2LHcUzjPX6E11Aw

I have no idea what Rocky’s was thinking starting a burger joint next to Windmill and Jr’s. Great business plan guys. That place was just so sad inside. No restaurant that has opened in that spot has lasted more than a couple years.

Alright HOs, who wants to go in on a restaurant there with me?

And they do REALLY great double-cooked fresh fries. Might be my favorite in the area.

Ha! Good detective work Mr. Joon! I had never been to Rockys to have had it as a place of reference. Calling all HO’s looking for a biz partner!

(Though 160k for a closed location is pretty steep)

Here joon since you’re in the market here is one far more reasonably priced, location has its plus and minus. I was actually planning on driving by and checking this out.

Anyone familiar with it?