This is a food thread, not a politics one. Honest

My bet’s on the long lasting iceberg lettuce Have either of them been treated with Fruit Fresh? This may affect the outcome.

No she cannot! Iceberg is as much a standard for salads as the potato is for chips. I like other types but Iceberg is my preference. Never quite got how food faddists declared it passe some 10-15 years ago. It has been making a comeback lately though.

“iceberg” lettuce is quite an unused/known thing today in Europe - despite it’s origins in ‘the middle east’ and following thru the Roman Empire.

many many many other “leafy things” used as “lettuce”

“iceberg” lettuce is quite an unused/known thing today in Europe

I wouldnt regard it as unused in my part of Europe. The supermarkets always have it on the shelves but you’ll find more romaine/cos there.

As at this morning of Day 7, the smart money is on the lettuce.

All over the country, Britons are saying “lettuce prevail in the face of these troubles”

Wow, that was fast

Congrats to everyone who bet on lettuce! 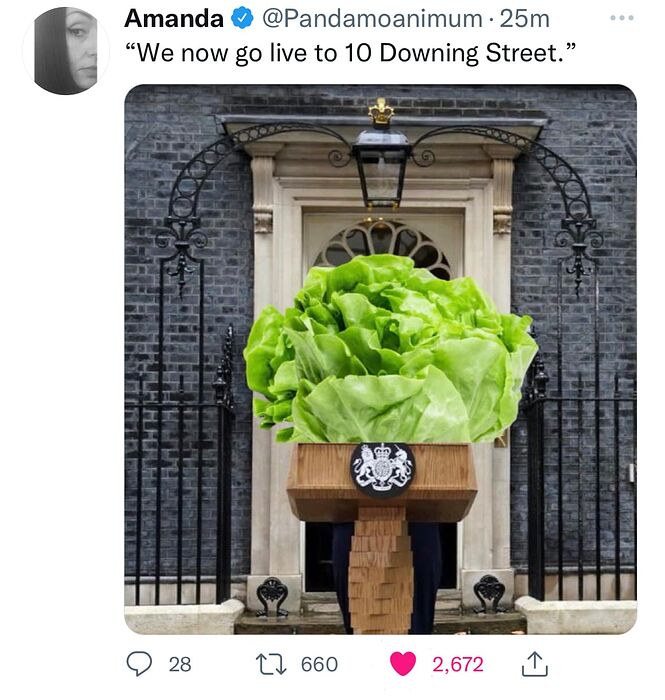 She lasted … what, all of two weeks? At least it seems that way.

45 days. But half of that was focused on the Queen’s passing.

Yep. We’re stuck with our mistakes for years . . . no American pol wilts before a head of lettuce.

It’s 44 days since she took up office as Prime Minister.

I been interested in politics throughout my adult life (and was a candidate at the 1979 general election - failed badly) but I’ve never knowm anything like this. I thought it was bad a few weeks back with all the shenanigans leading up to Johnson’s resignation but that was all about one person’s character. This is far, far worse - the sort of thing that in some countries would have had the tanks on the street. This is a government - described by one Conservative MP, as libertarian jihadists - which has trashed the economy and the fortunes of its own party. The announcment of its economic policy put pension schemes (on which Mrs H and I depend for our oncome) at such risk that the Bank of England had to step in to protect them. And it’s crashed the general economy that our savings (on which Mrs H depend forpaying for big things like holidays, new fridges and new cars) has lost about 7% of its value over 6 weeks.

Sorry to go overtly political here but it is such a devastating series of events that I am genuinely worried for the future. Probably rightly, the opposition parties are calling for an immediate general election but that’s going to mean several more weeks of uncertainty. It really is a no win situation.

Keep in mind you’re talking to US citizens. It’s not exactly been sunshine and rainbows over here.

So sorry to hear this–the loss of pensions and savings is frightening. And it seems a tough winter is ahead. I’ll keep you and Mrs H in my thoughts.

Wow, somebody should register Truss ® as a lettuce brand. Should sell!