The Sorry State of Rye Bread in Westchester

So yesterday I needed to get my fresh rye bread so I could make my annual day after fresh turkey sandwich. Let me clarify by saying I live in Northern Westchester - Goldens Bridge - where yuppie or whatever they are called now is king. The closest bakeries to me are in Mt. Kisco and Somers. The ones in Mt. Kisco do not have bread. Nope. Well the 2 French places have brioche and croissants, but no rye bread. The other place may have rolls but no rye bread. I had to go to Somers to Sweet Delites which is an old fashioned bakery (good) with lousy stuff (bad), but they had a rye. The only rye in town. So I got it and the only thing I can say about it is that it was fresh. Well, it WAS fresh but they don’t use wax bags anymore either so it was in paper so today it’s stale. I remember wonderful bakeries when I was a kid - specifically Lincoln Park Bakery on McLean Ave in Yonkers that had great cakes, cookies, rolls and YES rye bread - plain, seeded or to die for, onion. Whats up?

Too bad, Gwenn. Rye was a staple all over the city and southern Westchester for years. Enjoyed our Turkey on Rye yesterday. You should have reached out further, if possible…Whole Foods, Fairway…we got ours at The Bread Factory in New Rochelle. I know that is a stretch for you.

Whole Foods, Fairway…we got ours at The Bread Factory in New Rochelle. I know that is a stretch for you.

I am not a fan of Whole Foods and as you said, I was not up for a trek, certainly not to New Rochelle from where I live. Yesterday, I was exhausted and barely made it off the couch. The point here was to find a bakery with good rye bread locally. Sadly, something else lost I think, like a good pastrami sandwich!

Zabar’s ships and it is like the old time stuff, excellent crust:

If I want rye I usually bake my own, but then I do the Swedish style. Bob’s Red Mill rye flour is excellent if you decide to go this route. It takes 3-4 hours, but its worth it.

The grocery store stuff is pretty much crap, but if I am in a pinch I will head over to the ShopRite deli for Pechters, which is acceptable and is baked in Harrison, NJ. You might want to check and see if they carry it in your area:

Thanks, but for two slices it’s a bit much. I’m not big on baking, though my biscuits for turkey day were great.

The Whole Foods in Port Chester has rye bread imported from Brooklyn. It reminds us of the old days. We think it’s the best around.

Does it come in plastic or wax. Part of my issue is they don’t treat the bread properly anymore. Bread + plastic = soggy crust. A good rye needs to be kept ina wax bag. So I’m sure some markets have a passable rye, and back me up boomers, there is nothing like a fresh rye from a bakery. That said, we have a small market in Yorktown called Turcos who make their own breads. It was far for me yesterday, but I normally like them. But they are still not in wax.

Thanks, but for two slices it’s a bit much. I’m not big on baking, though my biscuits for turkey day were great.

Buy a loaf and freeze in what you don’t eat right away.

The Pechters usually comes in plastic, but it’s still ok.

At Whole Foods, when they slice it they put it in a plastic bag. It keeps very well for days, or I freeze it. They also have non-plastic bags that they use if it is not sliced

Not especially helpful but…
Next time you are in grand central head to the great northern food hall to meyers bageri, they bake a fantastic array of hearty dense breads including a fantastic rye. I don’t get there often but when i do i buy several loaves that i then slice at home and freeze. It’s slightly different than Zabar’s, more intense rye flavor and a bit more chewy but that’s a good thing if you ask me
http://greatnorthernfood.com

I’m reading this with interest. I live in Los Angeles and am not a boomer, but have the same problem. I remember rye bread as being a staple growing up, and there were myriad delis and Central/East European bakeries to get it.

Now any rye from the old places is too soft, with no crust and no rye flavor. And forget about pumpernickel, I’ve written that off as a lost cause.

It seems the new bakers are so enamored of their ancient grains and seeds, or fermentation/natural yeast techniques, that they don’t want to make basic bread and rolls. They want to be noticed for uniqueness and for their artisan product to be the star of the sandwich (avocado toast, anyone?), not a supporting player.

It’s nice to have options, but sometimes I just want a cream cheese and tomato sandwich on a slice of sour rye with caraway.

The whole foods in Port Chester does have a very good rye bread.The old fashioned kind - dense with caraway seeds. Also kneaded bread in Port Chester. Third choice (not sure of this) but I think the Citarella just over the border in Greenwich may have one. Fwiw, their pizza is quite good. Also some of the farmer’s markets sell Orwasher bread - and their rye is still very good. But in general good rye has gone the way of the do-do bird. And of course not an affordable one in the bunch, but for a treat worth the expense.

At Whole Foods, when they slice it they put it in a plastic bag.

Plastic is fine if you are going to freeze and toast, but otherwise it ruins the crust, IMO.

Now any rye from the old places is too soft, with no crust and no rye flavor. And forget about pumpernickel, I’ve written that off as a lost cause.

Yes, Bookwich. That is my issue. It barely tastes like rye bread.

Thanks, Rich, and I do like the Kneaded bread as a rule. But, the morning after Turkey day when I have been cooking non-stop for several days, and cleaning up, Port Chester was not happening. I probably should have titled my post more like why are there no more old fashioned bakeries that sell good rye bread!

I don’t know if all Stop & Shops carry it, but the White Plains one, at least, has a rye very similar to Whole Foods’ . It’s stored in a separate cabinet with other higher quality breads and has paper bags provided. We never have the bread sliced in the store, so plastic is not a factor

And just to show you what passes for rye bread at my local bakery - went today for my rye for my turkey sandwich. This i so small it won’t make a cocktail sandwich!!! And its from the middle of the bread! At it’s widest point its 4X3 inches! 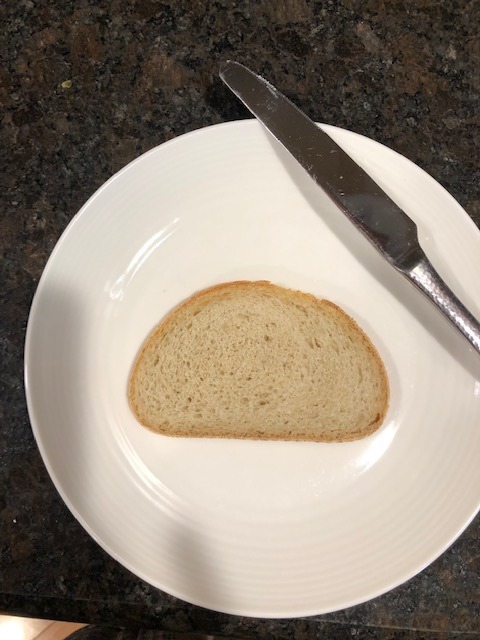 So instead of “wheres the beef?”, we now have “wheres the seed?”
Totally off the subject and probably gone soon or already gone, one of the things I tried from trader joes was a frozen cranberry pie/tart. It was very good - basically an almond cake with a few walnuts and tart cranberries covering the top (once you flip it over) . I went back today (day after thanksgiving) and grabbed another for freezer.

Just posting to “pile on” to the points already made about putting fresh bread in plastic bags.

There are just two bakeries in my town that produce a crusty dinner roll, and sub bun. If I buy a half dozen at noon, to go with a pasta dinner at 6–and take them home in plastic, by dinner the rolls are as soft as a baby’s behind. I always stipulate six ______ rolls in paper, not plastic. We have gallon sized plastic bags here at home to use if there are leftover rolls needing to freeze.

Now, if someone would just post a thread about the scarcity of bakery French Bread, so I can piss & moan on that topic…

we now have “wheres the seed?

Ha, no, I got a seedless. It was more like where’s the bread!!

I always stipulate six ______ rolls in paper, not plastic.

And I have to do that in Panera - a bread store, for goodness sake. I happen to like their asiago cheese bread and the crust is excellent. Every time I go in I have to stipulate please put it in paper not plastic. They say - you mean NO plastic bag? And when I tell them it ruins the crust they are shocked!

And when I tell them it ruins the crust they are shocked!