I am as familiar as any lay person with the myriad ways in which written instruction can fail amateurs in the kitchen. The goal of a recipe is to bridge the experience of a person who has already mastered a dish with that of a person who would like to make it for dinner. The key to writing a good one lies in assessing the size of the chasm and identifying the information necessary to shrink it—yet there is no closing it completely. Too many variables are impossible to control. One stovetop burner’s medium-high is another’s medium-low. Two and a quarter pounds of winter squash might be sugary sweet one time and bland the next. Detail must be sacrificed to the brutal spatial constraints of print publishing: “mix until dough forms.” What’s more, culinary technique often requires the sort of nuance that defies verbal description, as anyone who has ever attempted to explain the pleating of dumpling wrappers can attest.

Certain vital duties are especially ill-served by the convention of vague summary, foremost among them the matter of seasoning. Perhaps more than any other isolated task, this one can either clinch or derail what you’re cooking. You may have scrupulously sweated onions until translucent and simmered lentils until soft, but if you serve your resulting soup without sufficient lemon and salt, or with too much, then the rest of your effort was for naught. So it’s a shame that for this pivotal step—after you’ve applied the prescribed teaspoons and tablespoons but before you deem the dish ready to serve—we cookbook writers tend to abandon readers with the murky dictum “season to taste.” 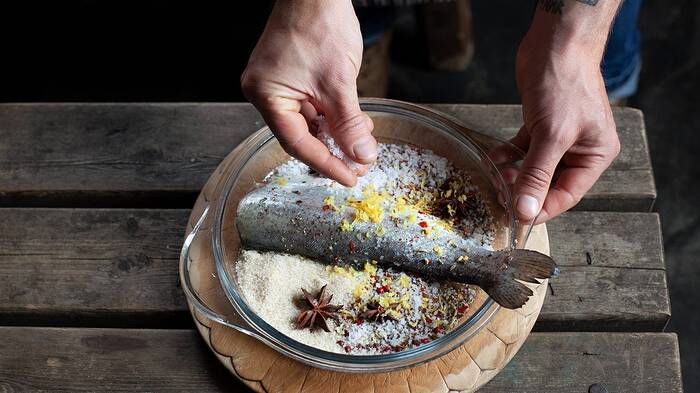 Countless cookbooks instruct readers to “season to taste,” but few of us know what we’re tasting for.

“The underlying problem might be the mistaken implication that my taste can be relied on. As the late Judy Rodgers writes of seasoning in the exceptional “[Zuni Cafe Cookbook]”: “Recipes do not make food taste good; people do.” Yet I, like most people I know, cook in terror of overseasoning, with the result that I end up chronically underseasoning….”

This is why one should taste food… Not only when you’re cooking, but just go out and eat food and try to determine how the cook did his seasoning. After a few failed attempts seasoning yourself you are bound to get it right eventually. Also, know your salt…

They were apparently short on topic ideas at Chez Goode.

Certain vital duties are especially ill-served by the convention of vague summary, foremost among them the matter of seasoning. Perhaps more than any other isolated task, this one can either clinch or derail what you’re cooking.

To expand on this, I have never seen a recipe that does an adequate job of explaining the importance of seasoning in stages. Salt is not just a flavor, it is a tool that can and should be used to draw out water from meat and produce at the appropriate moment(s) as a dish is assembled (among other things). If you forget to salt your sauteing onions, it will take much longer for them to soften and they might burn before they get wilt. However, if you DO salt your mushrooms, they’ll release liquid and steam instead of searing. Didn’t salt your pasta water? No amount of extra salt in your sauce is ever going to make that dish taste right.

This is technique, obviously, and I know I am preaching to a well-trained choir here - but it seems to me that recipe writers are missing an important opportunity to teach this absolutely fundamental skill. It needn’t take up a ton of space on the page and it would be well worth the extra ink.

Alison Roman certainly encourages seasoning at every stage of cooking. 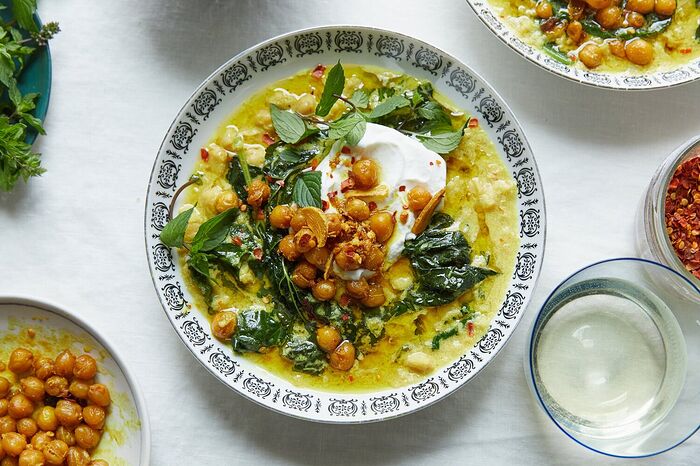 Spiced chickpeas are crisped in olive oil, then simmered in a garlicky coconut milk for an insanely creamy, basically-good-for-you stew that evokes stews found in South India and parts of the Caribbean.

That being said, in my view seasoning throughout cooking is a technique and recipes can’t be expected to teach common techniques such as mise en place and clean as you go.

I’m not familiar with Alison Roman but that recipe is very well-written in terms of seasoning at each step - why can’t other recipes/writers be expected to do the same? IMO mise en place and clean as you go are not comparable in any way - they are techniques, but they are more about kitchen management than actual cooking. Except in very specific cases (like a stir-fry, where you need everything prepped before you start since you need to add things to the pan in very quick succession), they don’t affect the outcome of a dish.

All of what you write is true. Still, how do you instruct seasoning by book or website? It would take 1:1 in-person instruction between the trained palate and the student’s.

I think “Season to taste” is enough, and completely unlamentable.

Season as you go is common knowledge to anyone with basic cooking knowledge and experience.

If every recipe included such basic techniques, most recipes would be very long.

Still, how do you instruct seasoning by book or website? It would take 1:1 in-person instruction between the trained palate and the student’s.

Well, the Alison Roman recipe linked above makes a good attempt. She adds “season with salt and pepper” at the end of each appropriate step - it is at least a reminder to layer seasoning. I worry her instructions might lead the beginner cook to over-salt, but that could be remedied fairly easily by adding “a pinch” or another small measurement to each of those directions. Personally, I would take it a step further - for instance, since the first instruction is to sweat onions and garlic, it would be nice if she had added “season with [a pinch] of salt to help the onions release their moisture.” Many beginning cooks (and plenty of experienced ones as well) don’t realize that salt has that power and therefore might not bother to salt if they planned to “season to taste” at the end.

I season to taste for myself. It just depends how I feel . More salt , less. More pepper, less . My taste changes daily . And I never taste my food while cooking. So there . Sometimes I don’t season at all . Especially vegetables. I like to taste the vegetables not the seasoning.

Season as you go is common knowledge to anyone with basic cooking knowledge and experience.

Is it, though? If you mostly learned to cook from recipes that don’t include such instruction, and you don’t spend countless hours discussing the finer points of cooking on HO, how would you know to do it?

I learned to cook when I was twelve (fifty-oneyears ago) long before internet message boards.

At that time cookbooks didn’t offer as detailed instructions as they now do. Also much of the time I wasn’t using a recipe. I figured out how to season as I go. As I said it’s a basic cooking technique.

I have zero problem with seasoning as the cook goes. Repeating it as some epiphany? Silly.

The best argument for that prescription is to avoid overseasoning–but since you can’t take it out, perhaps the best rote, impersonal instruction is to try to underseason at every step until the finish.

But it’s still a matter of subjective taste and preference. One could measure the salinity of almost anything, but what a soulless exercise to seek replication of Chef X’s salt palate.

But it’s still a matter of subjective taste and preference.

True, unless salt is needed to achieve a specific result outside of flavor/salinity. In those cases, IMO direction should be included both as a teaching opportunity for beginners and a reminder for those who may be experienced cooks but not necessarily technique mavens.

Are you speaking of minerality or some other discernible taste aspect of salt?

No, I’m largely referring to using salt to draw out moisture. I know plenty of experienced cooks who don’t realize that salt will help their vegetables sweat faster, allow them to remove water from cabbage before turning it into slaw so that the dressing doesn’t get runny, tenderize kale for a salad, etc.

I guess these people haven’t heard about salting eggplant.

I guess these people haven’t heard about salting eggplant.

OK. I don’t usually think of osmosis as seasoning. Salt-curing certainly can be taught–right up to the point of being too salty to enjoy.