The most disgusting (non-political) thing I have ever read!

From Decanter magazine: “Scientists claim to ‘re-create Montelena 1973’ with no grapes”

A company in San Francisco has claimed it can create wine without using grapes or fermentation - only with molecules.

It does sound a little unusual, but I think it is an interest effort. It is nearly impossible to reproduce a wine by the traditional method (unlike a few other things). Using this approach, I am guessing that they first analysis the major component from the real Montelena 1973 (maybe?), and then try to reconstruct the wine based on the information.

It really isn’t more disgust than the idea of cloning an existing animal or bringing back the mammoth. Is it natural? No. Is it disgusting? In term of food, I would say that this wine thing is certainly sound less disgusting than growing hamburger from a Petri Dish:

Will Your Next Burger Come From a Petri Dish?

Will Your Next Burger Come From a Petri Dish?

On the opposite side, who to say growing meat from a Petri dish is more disgusting than growing and killing a live animal…

We can agree to disagree, but there are some things that do not need – nor should they ever (IMHO) – be reproduced!

Every time I grill a steak, it never tastes exactly the same way twice . . . same with a burger, same with a pasta sauce, etc., etc., etc. I, for one, enjoy those differences.*

EVERY vintage of wine is different from every other, and while (e.g.) 2000, 2009, and 2010 in Pauillac are each considered to be extraordinary vintages , the three years each produced different wines from each other, even from the same château. And those differences magnify over time as the bottled wine ages, and ages differently depending upon shipping, storage, etc., etc.

These differences from one vintage to the next, combined with these changes as the finished wine matures in the bottle, are part of what makes wine exciting for – dare I say? – a vast majority of the people who are “seriously into” wine (whatever that means).

And which “1973 Chateau Montelena Chardonnay” did they reproduce? It’s doubtful they reproduced the beverage the way it tasted in 1976, when it starred in the Paris tasting. Were they able to somehow magically transport themselves back to 1976 in order to run a sample through the replicator so Jean-Luc Picard could say, “Chardonnay, 1973 Montelena, Cooled”? Doubtful.

So, did they reproduce the way the wine tastes now, in 2016? Now, I haven’t had the wine in years, but I’ll willing to bet the wine is OTH and tastes like $#|+ today.

No. This is, for me, pretty close to the definition of an abomination, and most people I’ve spoken ITB with agree. YMMV.

* This doesn’t mean that I do not understand, nor appreciate, the need for consistency in a restaurant situation.

Useful for the counterfeit wine market?

Eh, I don’t think this is such a travesty. It’s like filming a concert. Different from being there, but probably better than not being able to see the performance at all.

If it can be sold for around $2 a bottle Trader Joe’s (or someone similar) will sell truckloads of it. When Whole Foods got into the $2 wine biz a few years ago one of the varieties carried an appellation of “America”. If it looks and tastes like wine (a relative thing of course), and you can get a buzz from it, it will sell.

Should have known you’d have the academic take on this. It was the first time I’d ever seen that on a bottle. All I was trying to suggest was that, when I see that, it tells me the producer is likely trying to use the least costly fruit they can find. I know they have to at such a price, but my expecrations drop accordingly.

I just meant that there is a market for just about anything with an alcohol content high enough to get people a buzz.

Your topic says it all Jason . F…ing gross . Don’t even try to call it wine .

How different is this from what Lost Spirits has been doing?

So far as I know, it’s completely, totally different – so much so, in fact, that I am sure that I don’t understand your question . . . could you elaborate?

They use a photocatalytic reactor to recreate the effect of aging on spirits. Claims they can produce the same effect of 20 yrs of barrel maturation in a week. “Playing with molecules”

Well, in the immortal words of Miss Emily Latella, “Oh. That’s different then.”

What you’re describing sounds rather “odd” to say the least, and I’m not a huge fan of artificial manipulation in either case. But it still strikes me as very different. If I understand you correctly, what Lost Spirits seems to be doing is to take a spirit (let’s say Bourbon) and manipulate it in such a way as to make it seem “20 years old” even though – what? – it was distilled two years ago (the legal minimum to be called “Bourbon”). BUT . . . it Is STILL “real” Bourbon, right? Or, at least, it started out as real Bourbon.

What Ava “Winery” is doing is using NO grapes, NO fermentation. They are not taking real wine and aging it under a pyramid to make it taste like 1945 Château Lafite, or taking real wine – claiming to manipulate it using magnets, or microwaves – so that it tastes like 1967 Château d’Yquem . . . this is “wine” from a test tube.

One is lamentable; the other is disgusting . . .

the other is disgusting

Just to be clear. You are really talking about “morally disgusting” in the sense that it shouldn’t be done this way. But not “taste disgusting” – since we don’t know what it really tastes like.

To me, this is the same as people saying artificial Petri dish hamburger is disgusting. They are talking about the concept and idea of growing a piece of a meat on a Petri dish is disgusting. 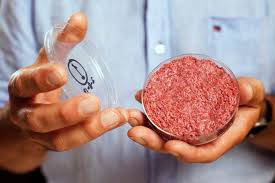 Yes. Both are morally disgusting. I have no idea if they taste disgusting, and – hopefully – I never will.

To me, this is the same as people saying artificial Petri dish hamburger is disgusting. They are talking about the concept and idea of growing a piece of a meat on a Petri dish is disgusting.

To me, the lab hamburger is aesthetically disgusting but probably morally superior to the disgusting beef industry with their feedlots, waste runoff, and animals pumped full of antibiotics.

To me, the lab hamburger is aesthetically disgusting but probably morally superior to the disgusting

I was thinking something along that line. As we get “better” at raising cattle/pig/chicken and turning it into an efficient industry, one does wonder if we are raising these animals worse than hundred years ago.

As for the wine, there isn’t so much concern of treating the grapes poorly. However, one can question if resources (like water and land and pesticide…etc) can be reduced by doing this lab wine.

… one can question if resources (like water and land and pesticide…etc) can be reduced by doing this lab wine.

I feel the same way. And for me to find something “morally disgusting,” that something has to cause harm. No one has yet explained how the creation of an imitation wine causes harm. Don’t like it? Don’t drink it.