I drove by old Red Bank Pizza yesterday…sign said Greek…so I searched the web…
“The borough planning and zoning office recently approved a restaurant called Greek Spot to over the space last occupied by O Bistro Francais at 15 North Bridge Avenue. No variances were needed in the change of tenant, according to the filing.

Bobby Lekkas, who owns the business with his wife, Angela (she’s the chef), have another restaurant called Greek Spot in Ocean Township. The Red Bank restaurant, which they hope to open before Christmas, will have a take-out operation accessed through the front door, and a 120-seat dining area off the parking lot side entrance, he said.”
Hopefully it will be as good as the original!

considering the Cuban spot seems to be non-existent, this is now my #1 spot looking fwd to in RB.

According to Red Bank Green seems like they are opening today.

When I was there (Ocean) picking up to-go two weeks ago they said there were waiting on the last permits so I hope this is true, if so I might go tonight. Unfortunately on the web site the Red Bank location button isn’t working yet, so I’m hesitant that the prices might not be the same. (fingers crossed I’m wrong)

The Greek Spot posted on FB that they are open in Red Bank. They put up some nice photos but I can’t figure out how to share them here. Can’t wait to go there!

Opening a restaurant in Red Bank seems like anything but a sure thing.

So their online menu(s) are up and sure enough prices for Red Bank are roughly 30% higher than Ocean. The Red Bank menu offers a lot more options but the same items in Ocean are priced higher in Red Bank.

I’m not sure what to make of it, I expected it because the prices in Ocean are so good, but I’m going to continue to get my take out from Ocean.

took quick look and noticed same - wonder f it’s b/c its a larger space and maybe they are focusing more on sit down aspect…or could just be the Red Bank tax??

Any/all of the above I’m sure.

Honestly giving this some more thought this should have been treated as a rebrand rather than a second location. Something as small and easy as that would have taken care of any questions.

“From the people who brought you The Greek Spot we give you: The Red Bank Greek Grill”. Same dishes but new menu and prices aren’t as significant since you’ve established this is a “different” brand.

I wish them well but this is a misstep for the second location. (in my opinion)

To be fair, the original location is in a terrible spot in a teeny strip mall next to a laundry. I bet the monthly rent there is three squirrels and a chipmunk.

Please elaborate… who accepts the currency? I I have a couple of businesses I’d like to open…

You know you might be right, I was there one time over the summer when a raccoon chewed thru a power line and they had to cut the electricity to the entire strip mall. It must have been a busy day and it escaped the cash draw!!!

We had takeout dinner from the Red Bank location tonight. We had the octopus app which was good, the spanikopita which I enjoyed, but my wife was meh about. We both really enjoyed the Tiganita app which was fried zucchini and eggplant with what was an amazing tzatziki sauce. We also got the roasted eggplant dip which was oily and to me bland. Was a little disappointed it either didn’t come with or they forgot pita for the dip. Also got the lemon chicken soup which came with an entree and I thought was very nicely flavored.

For entree’s we got the moussaka which I again thought was good. My wife who doesn’t really enjoy the dish declared it possibly the worst she ever had but again not a dish she likes. We also got the roasted leg of lamb which was a little light on flavor but was enjoyable. The kids got gyros which were good and a generous portion for a kids meal. The rice with one kids meal needed salt as did the Greek side salad that came with one of our entrees. The Greek potatoes with the meals were excellent and I generally don’t like potatoes. The final thing we got was a gyro platter and the meat seemed to be a little lightly seasoned but was again enjoyable.

All in all we will go back and try other things as we feel it’s the best Greek Spot in the Red Bank area. Light years ahead of the former Stamna or Greek Eats. I did enjoy Apella and Nikos rendition of the dishes we had at both places more.

Had you ever had take out from their Ocean location or is this your first time ever trying them?

First time trying them so I can’t give you a comparison to the other location.

Thanks for the report. I can’t believe you don’t like Greek eats. I love that spot, for what it is, and a giant fairly priced meal. I want to get here soon.

Well folks, we have a winner! I dined here tonight and it was a very enjoyable meal.

To start with the negatives, I don’t really have one that I can think of, except that there wasn’t any parking so we parked in the galleria which was railed. My guess is triumph is taking a lot of that lot over. No big deal to walk 50 yards.

This place is actually quite nice inside with a coastal Mediterranean decor. This is a restaurant you can bring your spouse, a date, family or clients to and no one would dislike the atmosphere imo. It isn’t fancy but it has a cool vibe. Don’t expect several water choices, elegant glassware, or fancy cutlery. It’s byob which most people probably know. This is good food with casual dining, and the pricing reflects this.

The food is what this place is about. They start you with complimentary pita bread and olives which are outstanding. The pita is good as well, but the olives shine. The seasoned oil left under the olives was speaking my language. With a little salt and pepper added to the oil, this was a home run when sopped up with pita. The oil on the table was actually quite nice. It actually had flavor! I’m not a fan of bland olive oil. Also, they have sea salt…brilliant. A pepper cracker would have been cool but not big deal at this price.

And onto prices, for 17 bucks I was very impressed with my shrimp dish. Look at these shrimp! They come with shells on but are cut and deveined. They are fresh and tender. The shells keep these suckers moist as hell and they were cooked to perfection. I know shell peeling isn’t for everyone but trust me, these work! Why they don’t say “jumbo” shrimp on the menu is beyond me. Once I peeled one I drowned it in the lemon potato sauce and this was spot on…so nice. A little salt and pepper in the sauce was all this needed. And yes, the potatoes were good too.

My friend had this braised beef dish that that was delicious and very “rib sticking.” It could have fed two of us and she took more than half home. It has pieces of egg plant and zucchini in a tomato sauce that had a hint of cinnamon. I would order both of these again tomorrow. At 17 dollars a dish this place did it for me. In fact, I’m going to terrorize this menu and try to eat my way through it lol. 40 dollars for two meals and a side of rice pretip.

Great service, no wait. Get here before they raise the prices 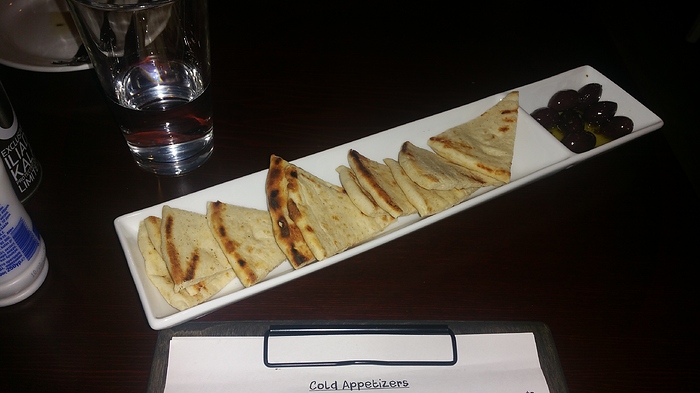 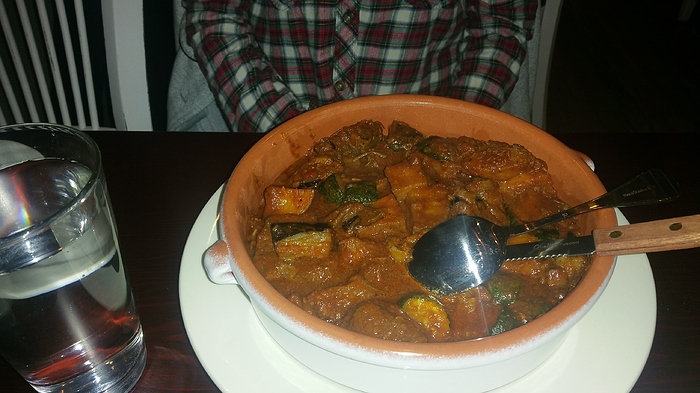 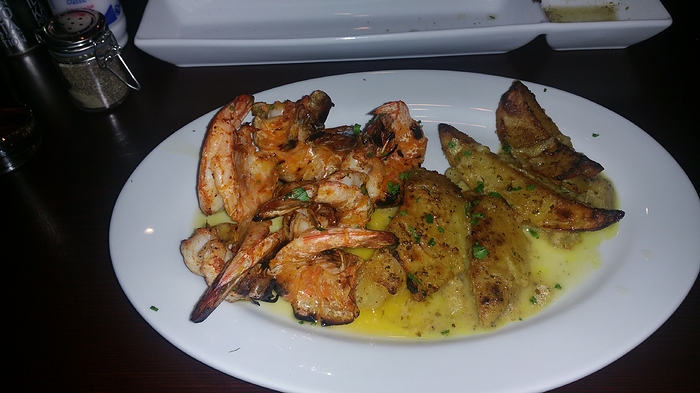 Nice Johnny that’s wha I was hoping to hear!! That dish looks like a hearty stew! I gotta get there soon, in the meantime it’s Ocean for cheaper take-out! Lol

Yeah for take out ocean would save you cash.

For anyone wondering, the takeout menu is good all the time. On weekends, if you’re sitting in the dining room, you have to use the dinner menu at any hour.

For lunch, mon-fri, you can sit down and use"cheaper" take out menu.