I, generally, hate going out and spending money on something I can cook perfectly well at home.

On the other hand, I love going to a place that treats me well and provides me with other items that are well prepared that I most likely am not going to prepare for myself at home.

This is the story of my dinner at The Federal in Waltham, MA.

BF and I were reasonably frequent flyers at the bar of The Federal (and of Flank’s before that). We always had a great time - the food was good; the drinks and service were great. I tried Pappy Van Winkle for the first (and so far, only) time there when it was still Flank. The bar at The Federal turned out to be the last place we would eat out at in March of 2020 before everything shut down.

We are still getting used to the whole “eating out” thing in the “now times”. We’d been getting more comfortable with it last fall/early winter and then omicron came and rained on the parade and we holed up back inside the house. After our successful outing to The Gaff a couple weeks ago, we decided to venture forth once more and try to do an early dinner at the bar of The Federal.

We got there at around 6pm on a Friday. Our opening drinks - a filthy vodka (Tito’s) martini for me and a muddled Old Fashioned with rye (Michter’s) for him.

The drinks were well executed. While BF didn’t feel his approached the heights of the one he has memories of from The Vesper Bar in Las Vegas, it got the job done. My martini was as filthy as promised and I enjoyed the blue cheese stuffed olives that they made in house.

Our starters came out fairly quickly thereafter. A half dozen Martha’s Vineyard oysters for me and clam chowder for him. BF enjoyed the flavor and portion size of the chowder. The oysters were nicely briny and had a little minerality to them. I ordered a glass of chablis to accompany (St. Claire, Burgundy) which worked well. 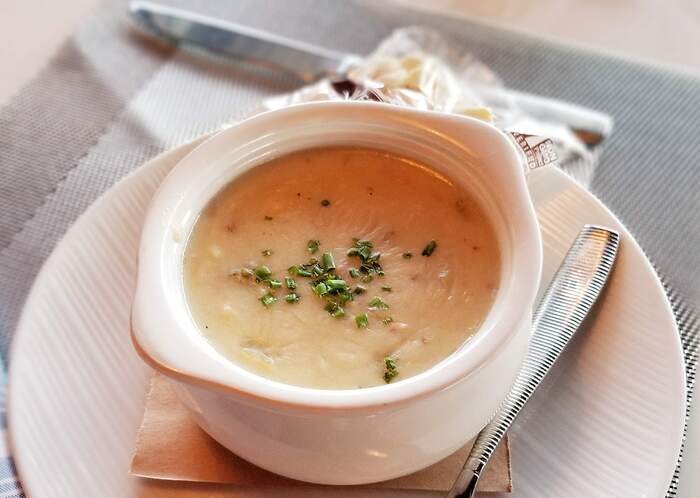 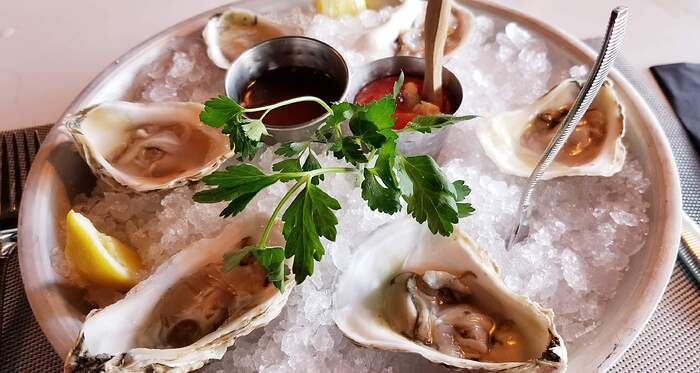 For entrees, BF had the 16 oz. Delmonico and I had the 16 oz. dry aged bone-in sirloin. I also got the bone marrow add-on, which were 2 bone halves. They don’t come with toast, but you can get some baguette to go with it if you ask (I did). I also got a little tub of rosemary sea salt on the side for both the steak and the bone marrow. As a side to accompany our meal, we split the creamed spinach with parmesan croutons. 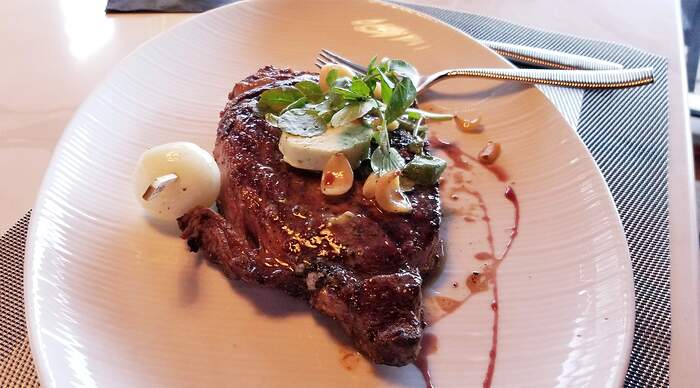 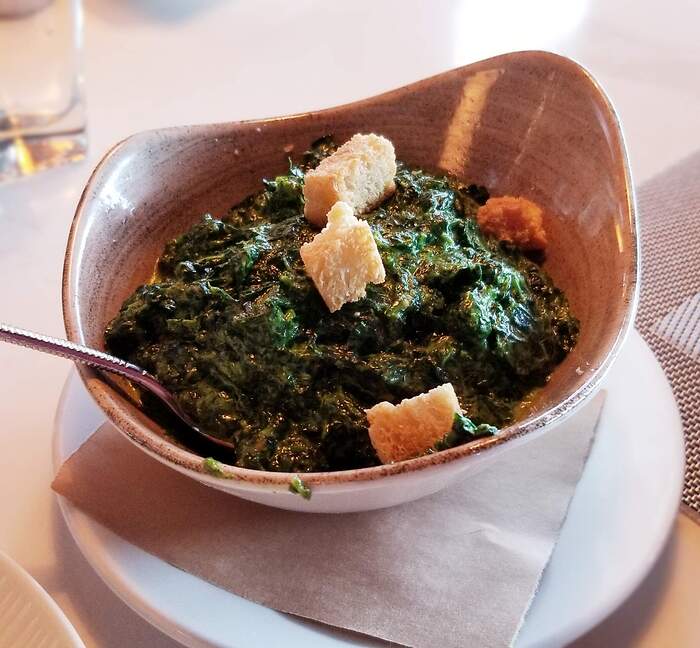 Both steaks were cooked to medium rare. The bone marrow was the star of the show for me; I ended up bringing about half my steak home. BF switched to beer with his steak (Wormtown Be Hoppy). I had a couple glasses of a Super Tuscan, Pievasciata Vallepicciola. I thought it went well with both the steak and the bone marrow and had some tannins that cut through all the fatty richness nicely.

We skipped dessert in favor of the bourbon list. The Federal is getting much of its bourbons from Heaven Hill Distillery currently. BF ended his meal with the Elijah Craig Toasted Barrel (not on the list, but it’s there if you ask). I got the Larceny Barrel Proof (which clocks in at 126 proof in this batch and was still somehow deadly smooth over ice).

Overall, this was and outstanding meal and the service by the bar staff was superlative. We’re looking forward to our next trip back.

Nice review. I’ve been there multiple times (both for dinner and larger gatherings) and have always been pleased with both the steaks and the service. They also sometimes have a butternut squash ravioli entree which is delicious! Their patio is quite nice in warmer weather, though they added a party tent last year which I wasn’t a big fan of.

I, generally, hate going out and spending money on something I can cook perfectly well at home.

Great report, and your presence here is so welcome.

A question on cooking steaks at home: I, too, pride myself on mine but the limitation I face is not being able to achieve the really high temperatures that professional steakhouses do. The only time I can is over the summer when I grill on wood on my Weber and achieve satisfaction (plus one visit to the hospital when the Weber lid swung slightly, the edge hit my forearm and crisped my skin – talk about serving food garnished with the chef’s own cracklings).

What do you do to get high temperature?

A good option if you don’t have a grill or don’t want to fire it up is to sear the steak on both sides in a skillet then finish in the oven.

I salt my steaks at least a day in advance and let the exterior dry in the fridge. Cook on the grill or in the oven at very low temperature and then finish in a very hot cast iron skillet. Matches any steakhouse offering I’ve ever had (and beats most).

Exactly my feel. Thanks for the review.
I had a mostly hate experience with the high end steakhouse at Foxwoods where I ended up for a work dinner recently. But I hate writing about mostly poor experiences, so have been putting it off.

It depends on what the weather is like outside and/or what I am willing to wash up for pans when we’re done. I’m most likely to cook on the stove top on medium high (~375-400F) and then finish in the oven. It seems to give pretty good results as far as maillard reaction. Here are a couple of steaks I did that with (a porterhouse and a rib eye): 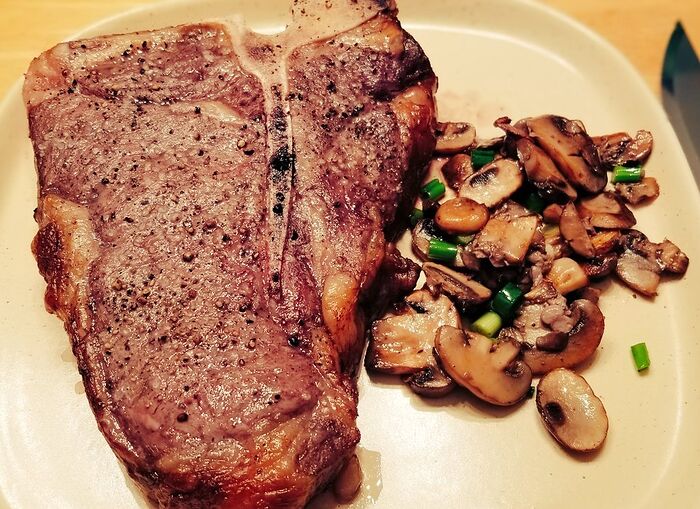 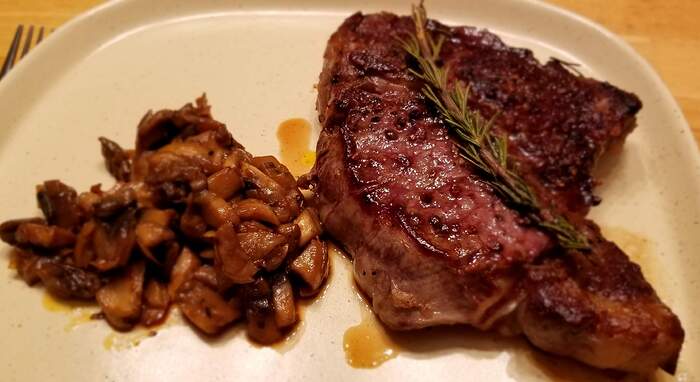 But, I also get pretty good results out of my electric Kenyon if I’m grilling outside (sadly, the condo association won’t let us have anything with a real flame, RIP my Weber). This sirloin was done on level 14 out of 16, 4 minutes a side with the cover closed: 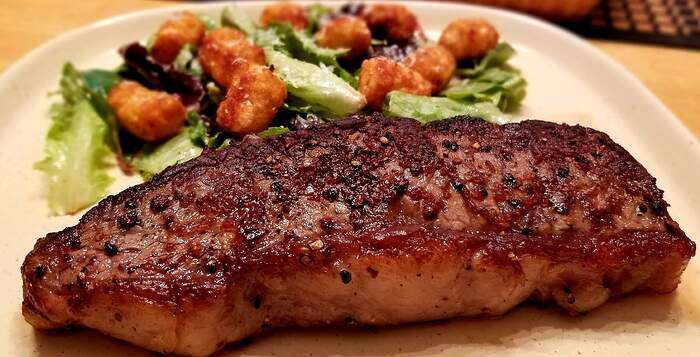 Sometimes I use my broiler. This bavette I used for jjapaguri was 5 minutes a side on the low setting (after warming it up for about 20 minutes) and then rested for about 15 minutes tented with foil: 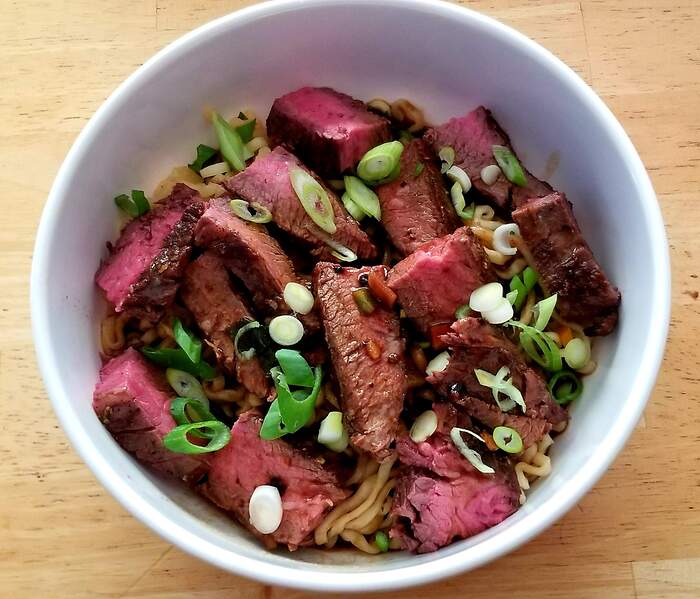 I’ve gotten surprisingly good results on my indoor electric grill (Cuisinart Griddler Elite). This carne asada was done at 425F for 5 minutes a side and then rested: 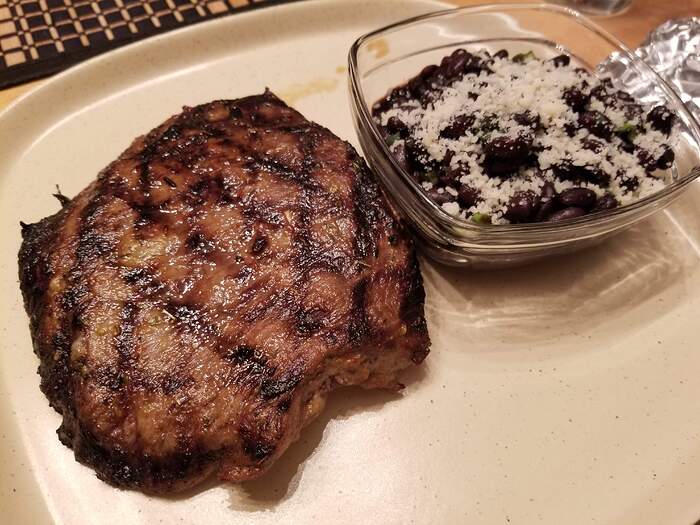 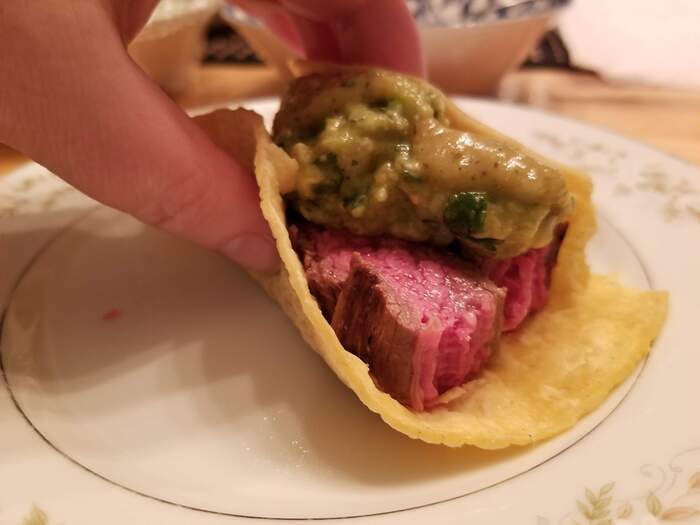 And then, sometimes you want a larger format meat. This is a ~2lb picahna we did in the electric Masterbuilt with oak until it got to about 122F and then finished in the oven at 500F for 6 minutes to brown:

Great pictures. As I said, I get pretty good results myself using (depending on mood, what else I might need the oven for, etc.) both searing at high temp then finishing in oven (as @MaxEntropy also suggests above), or reverse-searing (as @uni suggests).

But unless I grill on wood I don’t get quite the char that the better steakhouses give you.

I think you can get close finishing under a broiler set to high and left to get ripping for 15-20 minutes. I did that with some bone in pork chops recently. I actually started them under the broiler on the low setting for 6 minutes a side and then finished on high for 1-2 minutes a side (or when they looked and smelled right, basically…I also opened all my windows!). Next time I use my broiler, I’ll have to remember to temp it to see how hot it’s getting. I am using a Samsung electric oven that’s about 5-6 years old at this point. 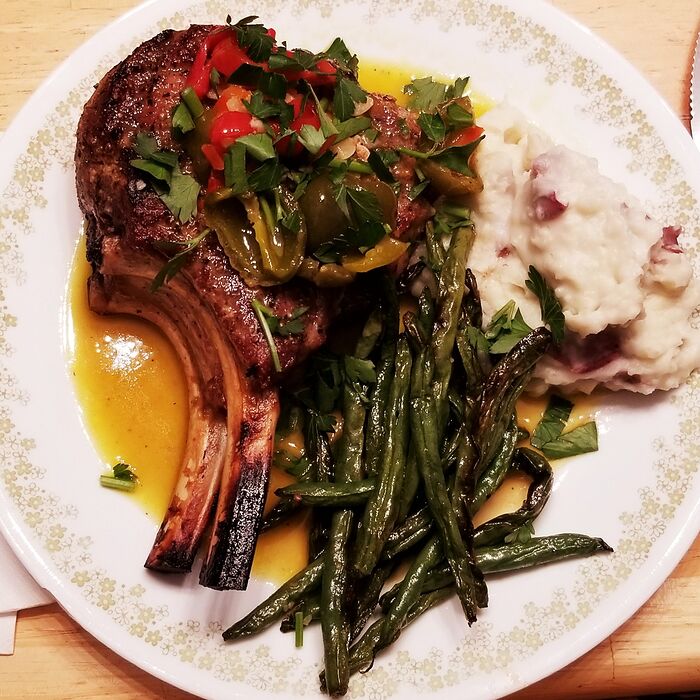 What do you do to get high temperature?

I don’t like steak. Haven’t had steak in decades, at home or in a restaurant. Your steak looks delicious to me! Great work!

Your electric oven is going to work much better as a broiler than our wimpy gas broiler does! And by the way, those charred green beans look fantastic, just the way I like them.

Another super high heat trick - though to be fair, I’ve never tried this with steaks and you’d have to pre-cook or you’d burn the meat to a crisp (I’m a sous vide/sear type) . . . .

But for a super high heat sear - I use a charcoal briquette starter tube. If you 1/2 fill (or so) with briquettes, let them heat up, lay a grate/gill over the top and you’re good to go. It is insanely hot. 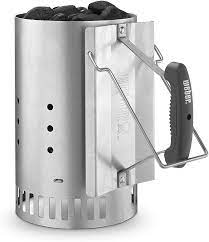 My experience has been that hardwood charcoal burns hotter than briquettes, and although the experts seem to say otherwise, a log of hardwood burns even hotter. Both of these, though, burn out more quickly and provide uneven heat. Not only do I have burn marks on my arm from wood, I have burn marks on my roof from when I moved a pork shoulder to the wrong side of the grill: it dripped/poured fat, and a spectacular column of fire rose into the air. I’ve always grilled since with a spray bottle of water in hand, and a bucket of water as a backup.

You know that the water would evaporate instantly and cause the rendered fat molecules to spread further apart, aerate, and burn even faster, no? You need a proper fire extinguisher. You never heard the saying never pour water on a grease fire?

Yes, I have an extinguisher on hand (and always had one) in case there is a serious fire. But that would also ruin the food. I’m talking about controlling the flame, and water spritzing seems to do the trick. The big flare from the pork that I mentioned, was a single, dramatic one that died down as soon as I readjusted the position of the pork.

Agreed that hardwood burns hotter. But the method I described, you don’t dump out the briquettes, leave them in the chimney/tube and put the grate on top. You could do the same with hardwood but the method is hot enough to quickly sear anything, but way to hot to “cook” something. YMMV

I wouldn’t spritz or dump water on a mix of grease and combustible materials fire. I seriously doubt it would be recommended by fire safety professionals. Your fire seems like it was a mix of juice and fat that dropped on the fire. The mixture vaporized and exploded because the fuel expanded upwards without constraint and had unlimited oxygen. I would never prioritize saving a piece of meat over fire safety. Splashing a bowl of water would seem very dangerous, if you miss and hit the meat, you are pouring a fuel mix right on the fire. Spritzing perhaps less so, but if the meat dripped grease simultaneously, could be dangerous.

You could try a pure CO2 extinguisher to save the meat but then you are just blowing stuff around and your steak just lands in the yard or whatever it’s just not worth messing around. Safety last if you got no money I guess. If you have money, just grab another steak from the freezer.

Oh, I see. I didn’t understand what you met. That’s an interesting idea. Thanks.