The difference between onions

I’m talking about yellow vs red vs white, the common grocery store varieties. What’s the difference in flavor, and what are the best uses for each kind? If I’m going to pickle onions I use the red ones, but otherwise I get stuck buying the yellow ones, sometimes the sweet ones but not usually.

Red-pickled, salads, I soak in cold water for 10-20 mins to remove the sharpness for raw salads.
Yellow-rice dishes, stuffed in whole chicken for roasting, stuffed, my version of inion soup, sauté, stir fry, Egg dishes. I use yellow the most.
White-I freeze 5 mins so I can use them without irritation. Grated in coleslaw, in guac, mostly when I want onion juice in a dish.

I think red is better in raw preparations, maybe milder. I don’t like most yellows raw, but I think they hold up body and flavor better when cooked.

I know this is more than you asked for, but I love this onion guide by Saveur.

Also,
More than you wanted to know about onions.

Now I’m gonna to have to do some detective

The Saveur onion guide has 33 types of onion, but Vidalia is not one of them. Nor does it mention green onions, a.k.a. scallions.

You’re right! I wonder how they decided which ones to take pictures of.

They do mention what I think of as “sweet onions” in the story; the second link

“The fact that onions take their sulfur from the soil explains why certain regions produce sweeter, or milder, onions than others. Vidalias, Texas 1015s, and Mauis do not refer to specific cultivars; they’re all white or red grano or granex types, sweet onion varieties that are grown in, and often named for, regions where the sulfur content of the soil is low. Sweet onions are usually sold fresh for short-term storage; the spicier ones, which tend to contain less juice and therefore have a longer shelf life, are cured and stored.”

" The kind of onions we’re talking about here are bulb onions belonging to Allium cepa , a species that’s been cultivated since ancient times and now is grown around the world. Allium cepa includes scallions, also called green onions; they’re essentially onions that have not yet developed their bulbs. The same species also includes pearl, boiling, and baby onions, which, interestingly, aren’t just smaller varieties (though some have been selected not to get too big) or ones harvested before they’ve matured. They’re Allium cepa sowed in densely planted patches, so that they don’t have room to grow any bigger than large gum balls. Shallots, which can resemble garlic but contain just a couple cloves, are a variety of Allium cepa called ascalonicum ; there’s a larger, sharp flavored variety popular in French cooking and a smaller, sweeter one that’s the allium of choice in southeast Asia…"

Good grief- I have a Saveur subscription. I’m going to have to read more closely. Thanks!

The red onions in restaurant salads are always mild, but when I buy a red onion it is always inedibly sharp. A cold water soak helps a bit, but the slices are still no milder than unsoaked slices of a typical yellow onion. I do not know if this is true, but a produce dept maager once told me that for a sweet, mild red onion, look for a squat one with flat ends. 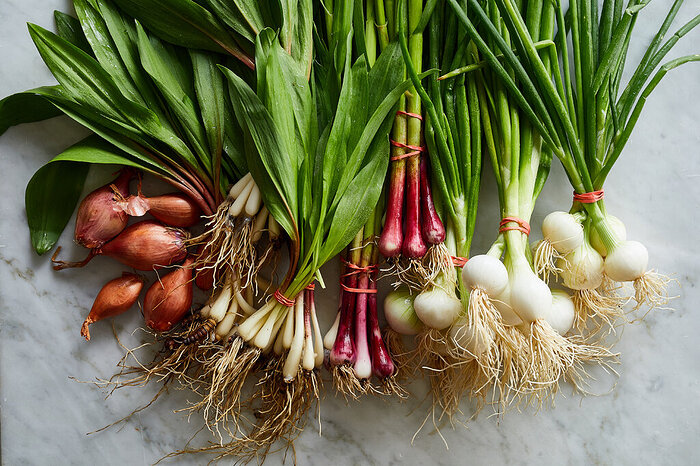 Know Your Onions (and Shallots and Leeks and Ramps)

Ever wonder about the difference between a spring onion and a scallion? A ramp and a scape? Melissa Clark has a crash course for you.

Thanks for that link, there’s always so much more to learn!

Having had a large vegetable garden I must say if you can get your hands on freshly grown onions do it. The same holds true for potatoes and the obvious corn, tomatoes, green beans etc.

Y’all see that bag of onions that is purple, yellow and white?

I do not, but I would like to! Is it in one of the links? Ah! Perhaps it is the onions, and not the bag that is purple, yellow and white!

Know Your Onions (and Shallots and Leeks and Ramps)

“But true scallions are actually a distinct species.”

I’m pretty skeptical about this. Wikipedia says " Scallions (also known as green onions or spring onions or sibies) are vegetables derived from various species in the genus Allium." I didn’t check to see if they have a robust reference for that yet – can confirm the NYT had none!

I’m not sure if we have exactly the same range of species and varieties here as in the US, but that whole group would be happily sold as “spring onions” in the UK – though hon. mention to the Scots word syboes/sybies! – and the very same ones would all “scallions” in Ireland. More power to you in making finer-grained distinctions, but good luck being 100% consistent if you’re going by vagarities like precise bulb convexity!

Allium varieties are fairly tricky, mind you, and there’s also the issue of cultivation and packaging. Often scallions/spring onions would grow into something rather more oniony if left to more fully mature (whether or not it’s any of the commercially used varieties). And infamously of course, some “garlic” bulbs are actually leeks!

What are sold as spring onions at farmers’ markets here in Baltimore are different from scallions purchased at the grocery store. Sometimes the spring onions don’t work as well, sometimes they work better.

Down here we go to Willcox, AZ where the you-pick farms are. Once we went there early enough that they had potatoes ready to dig. Not only was that just about the most fun I’ve ever had, oddly enough, like a buried treasure hunt, but the potatoes were just unbelievable. They were bursting with flavor, which you don’t hear about spuds and much, they cooked in a flash.
Also, their corn is the best ever.
I actually don’t know if they grow onions there.

They were bursting with flavor, which you don’t hear about spuds and much, they cooked in a flash.
Also, their corn is the best ever.
I actually don’t know if they grow onions there.

The flavor of fresh onions are so much better than store bought. Sweeter.

Sorry, I may have been excessively terse there. I meant the difference between bmorecupcake’s Baltimore farmers’ market spring onions, and grocery-store scallions.

The spring onion green parts are not as firm and sweeter. The white part is more bulbish and I find it more palatable in raw prep than scallion white part.