I’ll let @digga clarify for him/herself, but I don’t think s/he is claiming that people complain about the very existence of, say, black bean hummus, which is not a thing, because hummus literally means “chickpea.” But Italians DO get very exercised about people combining ingredients they think ought not to be combined, like seafood and cheese. And I can scandalize a lot of Chinese people by putting soy sauce on my rice.

YES to your whole post. I do whatever is delicious to me, the weirder, the better.

Ah. This was the missing piece for me. Didn’t realize.

Stupid authenticity: You can’t put ketchup on a hot dog.

Not authenticity, but taste and maturity: Don’t put ketchup on a hot dog if you’re over the age of eight. grin

I can’t argue with that logic. Hot dogs do have a place in my freezer as an emergency food. I eat hot dogs once or twice a year. Sauerkraut, sweet relish, mustard, and caramelized onions.

Authentic hot dogs? You’re stretching the concept.
Besides, Chicago requires Vienna Beef in addition to the toppings. Ketchup has nothing to do with this.

My family has commented that when they see me eat a hot dog, I am nearing death and I’ve decided it’s too much mess for me to kill and eat any of my companions.

I’ll eat sausage and offal with delight, but a childhood field trip to Eckrich (a processor in the Midwest) ruined me forever for pink sludge in a casing

Breaking news!!! Anybody can create any recipe he/she wants and call it anything he/she wants (provided of course it’s not the exact same name of something else chosen for subterfuge). That’s how the state of the art in the culinary sciences is advanced.

These people need to get over themselves. 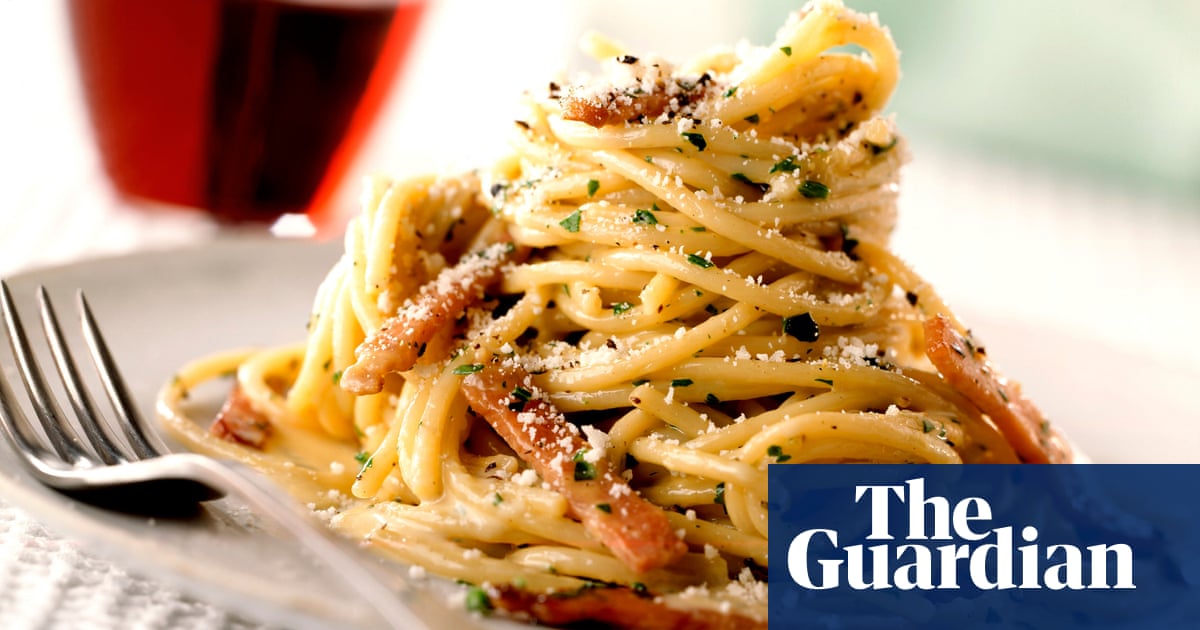 These people need to get over themselves.

In every culture, there are foods that are inherent to that culture. To an extent, they represent that culture. In Europe, we value those foods, whether in their original produce or cooked dishes.

In respect of the article you link to, as a perfect example, I refer you to the final paragraph and its description of a Yorkshire pudding. What utter fucking bollocks.

I suppose I shouldnt be outraged. After all, we are getting used to the Americanisation of our language and culture. I can think of several long established British cultural icons which wll be completely replaced by Americanisations within a generation. Centuries old and completely gone within another 30 years.

I’ve given this great thought and reiterate my first impression. Smoky tomato carbonara looks like a promising dish but is not carbonara.

Reply to Auspicious and many other upthread posts. Yes, I have been lambasted for my adaptations, actually loose interpretations of classic Italian dishes. It has been my fault in calling them by sacrosanct names. This is kind of a “duh”! Is a name necessary for an extraordinary plate or can it stand on its own?
Why confuse the issue?

Holy hell. I can think of a few different ways to describe a Yorkshire pudding, but that string of unadulterated bs isn’t one of them. Breakfast?! Seriously, and when sober?

I remember years ago seeing a cooking show that visited my home city of Tampa and attempted to create a Cuban sandwich. French bread, smoked ham, no roast pork, and tomatoes. It was probably a tasty sandwich, but it was miles away from a Cuban.

Brings to mind recipe reviews…there’s always a few that subbed half the ingredients, left a few more out, and then cooked it in the microwave then came back to post a bad review.

When we were in Miami in 2015, we went on a food tour round Little Havana. The guide was a guy of Cuban heritage. The subject of the sandwich cropped and he reckoned that it was probably a creation in America, rather than a sandwich you would have traditionally found in Cuba. Made sense to us, although we’ve never been to Cuba. A sandwich piled high with different ingredients sounded very American whereas a sandwich made in a Spanish culture would have far fewer ingredients and less of them - maybe just ham and tomato, or similar (very much a sandwich in the general European sandwich tradition).

Oh it is absolutely an American creation…by all accounts invented in Tampa to feed the workers at our numerous cigar factories, as the ingredients wouldn’t go bad in the heat. (I won’t go into full detail here as my foodieness, my absolutely geekdom about history, and my adoration for my hometown combine to be boring for most).

It is, at its purest, boiled ham, sliced roast pork (marinated in citrus and garlic), Swiss cheese, dill pickle slices, and mustard on the signature crusty bread baked here. (In the Ybor City eateries, a slice of salami is a nod to the neighborhood’s Italian influences, and found only in tampa). Its not piled high…just a slice or two of each. Lettuce, tomato, and mayonnaise is an abomination eaten only by tourists.

My dear and I were in Cuba approx a decade ago.

There is a grilled Sandwich Cubano, as Sunshine 842 described, served at the Hotel we stayed at.

In Girona, 1 hour north of Barcelona and the Madrid Capital, have several Cuban venues and they prepare Cuban sandwiches. The best one I had, is in The Madrid Capital at the oldest Cuban Restaurant which features phenomenal Cuban blues, called ZARA … The parents of Inés, the daughter of the owners who unfortunately passed on due to Covid; left their daughter a tiny gold mine.

Truly a gem of authentic Cuban specialties. The specialty is their Roast Lechón Asado (roast pig).

A fun sandwich once in awhile.

Have a nice wkend.

Barca, I would love the chance, if we ever get to travel again, to introduce you to a Cuban sandwich made where it was invented.

Dear Harters has had an open invitation for years…here and in France!

@Barca your mention of lechon asado brought back memories of a wonderful visit to Segovia, and their cochinillo asado / roast suckling pig.

They are completely different … I personally prefer cochinillo however, I do not eat either anymore and rarely eat meat … VENISON TARTARE – THIS IS HARD TO GIVE UP …

My recollection is that the Mallorcans call it “lechona” and the suckling pig I’ve eaten there has been better, to my taste, than my experiences on the mainland, or the Canaries. Very crisp, thin skin, a layer of sweet fat and then the tender moist meat. A delight.

It’s a main course that doesnt need much with it - it’s generally served on the island with just a couple of boiled potatoes. But, have something vegetarian - tombet or a trempo salad - to start and you’ve a very balanced meal to enjoy.

Here in Florida, it would follow the Cuban and Puerto Rican paths, and would be served with black beans, yellow rice, and yuca (starchy root vegetable), followed by golden sweet measures (fried ripe plantain)and maybe a decadent flan or tres leches cake for dessert.