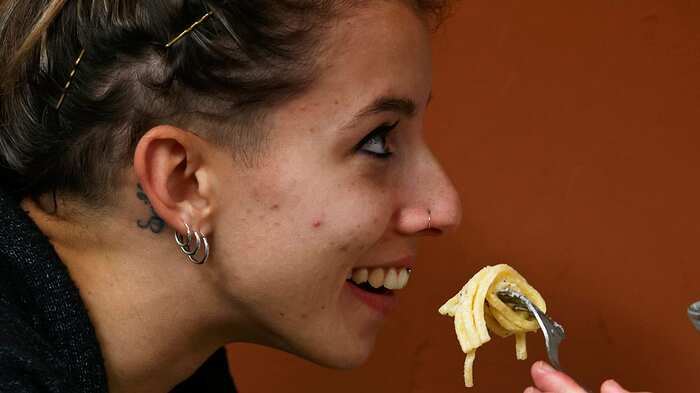 The Cooking section hit the third-rail of Italian cuisine with its “bright tang” spin on an untouchable favorite, violating the commandment: Thou shalt not tinker with perfection.

I’m looking forward to what these Italian chefs make of it. 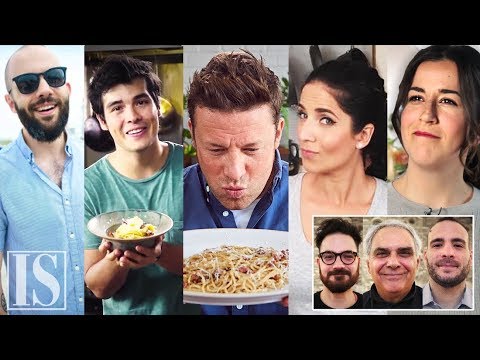 LOL! I’ve to admit I’ve made the version of Jamie Oliver from his book a few times over the years (not the same version showed in the above video). There was garlic.

How the 3 Italian chefs in @paprikaboy’s video (above) are cooking the dish. 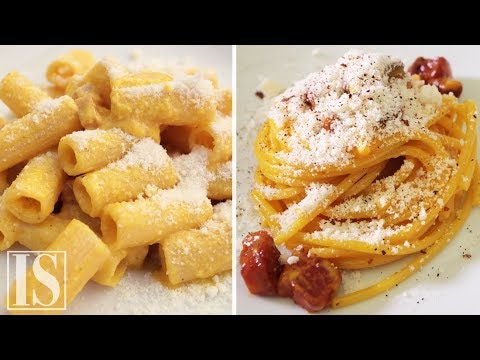 From the article “as if to say, if you add anything to carbonara it is simply something else.”

You can fiddle with any recipe. At some point you have left the realm of variants and entered the Twilight Zone - you have something else. Where? Opinion.

In my mind using bacon and/or adding garlic are variants. Adding tomato–good or not–is simply making something different.

A side of pickled or dressed tomatoes is a side. Using it as a whimsical topping in the middle is plating. Once it is an ingredient it is no longer carbonara.

Loved the article. Thanks for posting it.

Edited way down because I think prior post was a bit harsh.

What gives? I think the critics gotz to chill. In my opinion, authenticity is overrated.

I think the critics gotz to chill. In my opinion, authenticity is overrated.

There are two potential criticisms here, and I think too often people accuse all “the critics” of just the one they don’t like.

Second potential criticism: If you come into my restaurant and order steak tartare, and I bring you a medium-well steak, and you complain, and I tell you steak tartare is actually much better when it’s cooked like this - who’s right?

Words (in this case recipe names) have to mean something, or we might as well not use them. And famous favourites became famous favourites by being what they are, so they’re the least flexible.
(Especially pasta recipes, because every single one of them is “pasta with something on it”, so the only way that pasta recipes make sense is if they’re taken quite literally.)

Good authenticity: There’s already something called a martini, so find a different name for vodka and vermouth.

Too many people accuse “the critics” and “the haters” of demanding stupid authenticity, when very few or none of them were asking for that.

Stupid authenticity: You can’t put ketchup on a hot dog.

Good authenticity: Of course you can, but don’t call it Chicago style.

These hilarious reactions make me wonder why Indians are so calm about all kinds of dishes being bastardized - it would be SO much funnier if people’s “versions” of Indian food inspired this level of emotion.

This might have been my favorite line: “If my mother had wheels, she would be a bicycle” - I’m still laughing…

I’m certain that of the “Indian food” I’ve eaten, only two or three times maximum has it been anything that some person from some part of India would actually recognize as something they would make.

There IS another sort of aspect to this IMO, and that’s the way some recipes are very “set” in people’s minds while others are more of a basic framework. A hamburger is very much a do-it-yourself framework, where if you get a very small number of essential things right, everyone will agree it’s a hamburger - giving it your own style is accepted, even expected to some extent. (They might not all enjoy your hamburger, but they will certainly agree that it is one.) Many many recipes are treated like this. Even Italian ones.

Maybe all the fuss is because it’s pasta; maybe pasta is embarrassing because in reality there is only one recipe for all of it, namely “Pasta is mostly pretty boring, so throw in something good, maybe some kind of sauce”. And all the cooks avoid this terrible embarrassment by insisting “Ah, but the things WE throw in are very special! Our carbonara tradition stretches the entire six hundred years since 1950!”

Seriously though, when you have a very simple recipe among a lot of other equally simple recipes that share the same main ingredient, the only thing that differentiates it from all the others is to use those exact three ingredients (or however many there are). Pasta recipes are much more like coffee-shop recipes, where there’s the expectation that they are made in the same way from the same ingredients everywhere - because otherwise all the pasta recipes would stop existing and merge into one.

“If my mother had wheels, she would be a bicycle” - I’m still laughing…

The corresponding Yiddish one says “If my grandmother had balls, she’d be my grandfather”

These hilarious reactions make me wonder why Indians are so calm about all kinds of dishes being bastardized - it would be SO much funnier if people’s “versions” of Indian food inspired this level of emotion.

My original unedited post was in this same vein. I’ll paraphrase - whenever Westerners riff on Korean food in a completely out-of-left-field kind of way, I usually think “who’d a thunk it? Cool.” I Iike Kay Chun’s recipes a lot. I think she’s a smart cook.

You’re doing it again, pretending that people are complaining about something that they aren’t. Please stop with the straw-man argument.

Nobody here has said that a riff on a familiar dish is a bad idea, just that sometimes it’s not the same dish anymore and shouldn’t have the same name. Nobody wants to cramp your creativity, unless your version of creativity is to make mulled cranberry juice and label it “Vanilla Milkshake” or something

- it’s the label that’s under fire, not the cooking at all.

pretending that people are complaining about something that they aren’t

Isn’t the very first post in this thread a link to a whole mess of complaining?

Absolutely! Complaining about a name, not about bad cooking.

I’ll let @digga clarify for him/herself, but I don’t think s/he is claiming that people complain about the very existence of, say, black bean hummus, which is not a thing, because hummus literally means “chickpea.” But Italians DO get very exercised about people combining ingredients they think ought not to be combined, like seafood and cheese. And I can scandalize a lot of Chinese people by putting soy sauce on my rice.

I think this is exactly what the whole thing is about, no?

In any case, that was harsh.

I Iike Kay Chun’s recipes a lot. I think she’s a smart cook.

I had not come across her (that I noticed - I’ll feel bad now if Ive read her recipes but not associated them with her) - what’s your take? “Modern” / simplified / americanized but still ok Korean recipes?

Whew, I didn’t mean to cause a mini firestorm here. My take on both Kay’s recipes and people riffing on traditional dishes - Italian, Korean or otherwise - is that it’s all good. I’ve seen riffs on Korean dishes that veer them WAY out of the traditional definition of them (particularly in the eyes of my parents’ generation) but I’m totally cool with still using the traditional name. I find the arguments that, “hey, that’s not the dish that I know” to be petty. I remember reading about HRD in San Francisco incorporating Korean elements into tacos, burritos, etc, all to a delicious effect and then B and I visited from Boston just once, circa 2005-ish (?) and we were blown away (we had lots of friends living in SF back then).

Bottom line is, I think critics need to stop criticizing Kay. There are bigger fish to fry in the world.