I had another great meal here this past weekend. When we got there we thought the weather had kept everyone away but by the time we left it was packed.

My husband and I shared the radicchio salad, which was well balanced but a tad too garlicky for my taste. The bucatini that we shared was also quite garlicky (described on the menu as served with porky garlic & oil, pork cracklin breadcrumbs, parmigiano), pleasantly textured from the breadcrumbs and perfectly al dente.

For dinner we could not turn down the indulgent sounding “Pigducken” from the specials board. For $65, you get an enormous hunk of pork along with duck mousseline wrapped in pork skin that we could only eat about half of. It is carved tableside and comes with a side of their outrageous buttery salty potatoes that are dripping in parmigiana and a slaw, along with a sauce made from the drippings. I’d have loved a mustard or fruity chutney with it (which is how I ate the leftovers) but it was over the top special for a birthday celebration, almost as fun as the whole pig dinner.

Because we are complete gluttons we also got dessert-- we ordered the pudding chomeur which apparently is a French Canadian dessert that has been sadly missing from my life all these years. It was served with great flair from a tin can with a can opener and was absolutely insanely delicious. It is a cross between bread pudding and a custard and served with a maple syrup type topping. A perfect ending to the meal.

It’s loud, there are too many kids, the tables and chairs could use some updating, but none of this at all detracts from the fun and creative AND delicious things coming out of the kitchen here.

We’ve only been to the Cookery once but we thoroughly enjoyed it - and it sounds like another visit may be in order. That pigducken sounds insanely good!

I still need to get there! Those potatoes sound insanely good - as does everything else!

Awesome review - thank you. My mouth is watering! I can’t believe I haven’t been there yet!

I picked up a copy of the Edible Hudson Valley magazine and what did I find but the exact recipe for the dessert from David DiBari himself! Sweet serendipity! I’m making this for Christmas Eve dessert! 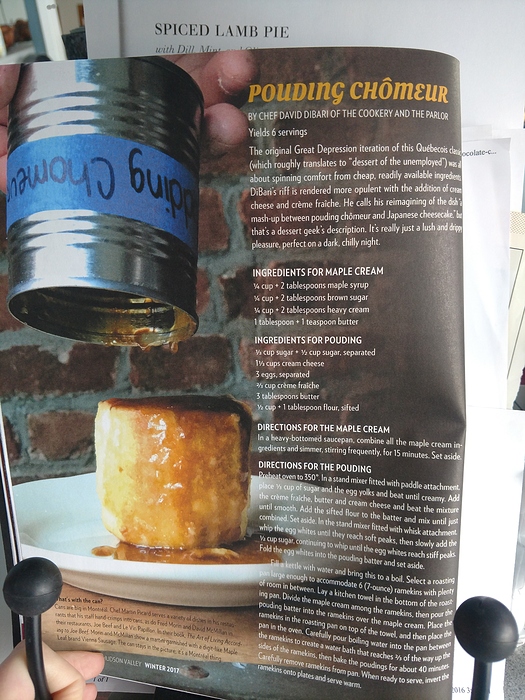 Thank you SO much for posting this - I have been thinking about making this for Christmas dessert ever since you posted about your meal, but most of the recipes I have found online look like the cake part will be a somewhat dry biscuit. This looks rich and moist and amazing! Please do report if you make it, and I’ll do the same!

Same re other recipes. I was having trouble connecting the ingredients in the recipes I found with what I had at the Cookery. This one with cream cheese and creme fraiche makes much more sense. I had been thinking of doing In Garten’s panna cotta for Xmas Eve which I love but I am going to give this a try. Will report back!

PS if you need a clearer photo let me know!

I made the pouding choumeur for Xmas Eve last night and it was a huge hit. I made it a few hours ahead and reheated it in a low oven in the water bath. I think that made the maple cream absorb into the pudding more than it would have if I hadn’t heated it twice so the presentation wasn’t as pretty but other than that this was a perfect festive dessert. The flavor is wintry from the maple but not too sweet and the texture really is a cross between a bread pudding and cheesecake but amazingly light somehow. This one is a definitely a keeper!

The Buttery Salty Potatoes are my wife’s favorite appetizer there. When we ate there for HVRW they offered to let her get them with the Market Steak entree instead of the potatoes that came with it for only $2 extra, which allowed her to try the chocolate chicken liver appetizer. I do wish they didn’t charge for bread.

As for the noise, it’s loud whether or not there are kids.

As for the noise, it’s loud whether or not there are kids.

Can’t be louder than Fortina!

We are finally going this Saturday!!! Had to take an early reservation but I don’t care. We are going with another couple and I want the pigs head doughnut and those potatoes and the meatballs and, and, and… I think we will need to share!!!

To say we enjoyed our meal at The Cookery is such an understatement! It was great!! The food, the service, wow.

We went with another couple which made for great sharing of more dishes than the two of us could have! We started with the buttery salty potatoes, the heirloom meatballs and a special for the night, fried cheese curds. Those potatoes – they were not what I thought they would be as I pictured fried, but they were quartered small potatoes in a parmigiana/butter “sauce” coated in fleur de sel. They were addictive! And those meatballs. They were large, like a softball, and there was nothing particularly different about them- tomato, parmigiana and parsley, but perfectly seasoned and soft. I would have had them for my main. The cheese curds were cheddar and coated in a light batter. Crunchy and melty.

For mains my friend and I shared the rigatoni with bone marrow, caramelized onion and madeira. The pasta was perfectly al dente. It was served with a marrow filled bone on the side, like an osso bucco. The sauce had a perfect balance of meaty, salty and sweet from the onions and madeira. I’m glad we shared – it was rich! And killer!!! DH is on a no carb diet (well, he cheated a bit last night) so he had the market steak which was a rib eye. It was nicely charred, cooked to a perfect medium rare and served with sautéed chicory. It would have had those potatoes, but DH had to say no. Our other diner had the special pasta which was a cock’s comb pasta fra diavolo. I did not taste it , but he devoured it.

Dessert – ah, dessert. We shared again. And to be so happy with not a bite of chocolate is unusual for me, but – we had the “stickabutta” pie – oh, my. Just what it says, stick of butter on a lovely, crunchy almond crust with a caramel sauce. Oh. And the Pudding Chomeur – yes, as I Eat a Lot of Ice Cream said, served in a can that the server opened and pushed out, with a maple top and cream. Again, heaven. Less successful was the third dessert – the special French toast bites with maple syrup and vanilla ice cream. The ice cream was great – smooth, creamy and very vanilla, but the French toast was, meh. Ok, but nothing compared to the other two.

We had very early reservations due to last minute reservations and time constraints for the other couple, but the place filled up quickly. It was tight but I did not find it as noisy as people said. We were able to carry on a conversation with no problem. Fortina is much louder. Our server was knowledgeable and friendly and we will request him next time we go.

I can’t wait to go back. What took me so long? Oh, and next time, the pork head donut!

So happy you enjoyed it! It is definitely a special place. I wish it were closer to me! And that pouding chomeur (and the accompanying article about a road trip with David DiBari) has inspired me to make a trip to Montreal!

I wish it were closer to me!

For sure. it was 1/2 hour without traffic.

Yes it’s a solid half hour for us too.

Thanks for sharing. My mouth is watering! Pudding chomeur AND cheese curds. I love this Canadian kick Chef DiBari is on! Gotta get there soon.

Just spotted this review - fabulous write up of what sounds like the world’s most decadent meal! We’ve got to get back there.

Thanks. We are going back next weekend with friends!!!

2 Likes
next page →
“Food is a pretty good prism through which to view humanity.”
― Jonathan Gold
Market stall in Lima
Credit: TXMX 2