Doesn’t really sound like RSV. Could be “common” cold, which in the last 10 or more years has seemed to have more lingering effects. Any swollen lymph nodes? Mono is also seeming to make a comeback and fits the congestion and especially fatigue (messes with your ability to store energy compounds). And of course covid “Big O” also, even in people who take the precautions you have.

But heck, given your profile (not a lot of human contacts) it seems weird that either you or your partner would pick up anything. Sorry Mate! Hope it gets better soon.

Edit - also apologies, I wasn’t really “trying to diagnose” you - just enjoying the post-turkey haze and being too chatty.

I like how you tied the legs out to keep them from converging back together once the proteins started tightening.

Did you figure out the discrepancies between the two probes? I’ve got an old 2-probe maverick and two other instant reads and they never agree, but it’s never more than 1-3 degrees off. I’ve tested in boiling water and ice water to get a feel for which one is “right-est” then just keep that info in mind when using one of the others (add/subtract a couple of degrees). Not that I’m that good a cook that a couple would matter…

Yes… that’s it! Actually I was trying to keep the legs over the pan.

I have not figured out the discrepancy. I did notice putting the Thermopen different places led to pretty big variations.

I’m going to check out whether or not the Yummily can be calibrated.

We’ll be home doing the same-old, same-old for foodstuffs. I will have somewhere between 9 and 13. … I told them no problem either way but try to let me know by Monday.

Ended up with just 9 peeps. I made a whole turkey plus 2 each loose legs and thighs in case we had the extra 4 folks. I made a mistake in brining all the pieces together in the same bucket. Turns out the loose thighs in particular, given all that open no-skin meat on the backsides, more readily absorbed the salt. I should have foreseen this[1] but have not had this problem brining a loose bone-in breast with the bird (but of course the breast has backside protection from the cartilage and membranes).

[1] I’ve over-brined loose chicken breasts before by forgetting them for a day. If you’ve never over-brined poultry they can end up with a texture very much like the springiness of ham. And a saltiness much like ham. Oh well. I’ll eat them.

The 2 loose legs and whole bird turned out really nicely. I way overshot the need for meat so I’ll be doing turkey soup or chili, and tetrazzini the next few days, along with sandwiches of course.

My 3rd daughter has been vegetarian and gluten free for a few years, and for about the last year is dairy free. She made the green bean casserole using half almond milk and half coconut milk for the mushroom gravy, and Bob’s Red Mill GF AP for thickening and for coating/frying the onions. It was a bit too much coconut, so next time we’ll try either all almond or 3:1 ratio.

She also made pumpkin cream cheese muffins using the Bob’s Red Mill GF and they were surprisingly good - normally for anything GF baked other than very oily cookies like choc chip, I can detect an unpleasant grittiness, but it was absent here. Note this was not the original Bob’s GF which has garbanzo flour as first ingredient - I can only recommend it for very hearty breads because the garbanzo is very strong. This Bob’s is touted as a “baking flour” and has sweet rice flour as the first ingredient and worked really well.

Serious Eats fried chicken (with a couple of small alterations to seasonong): 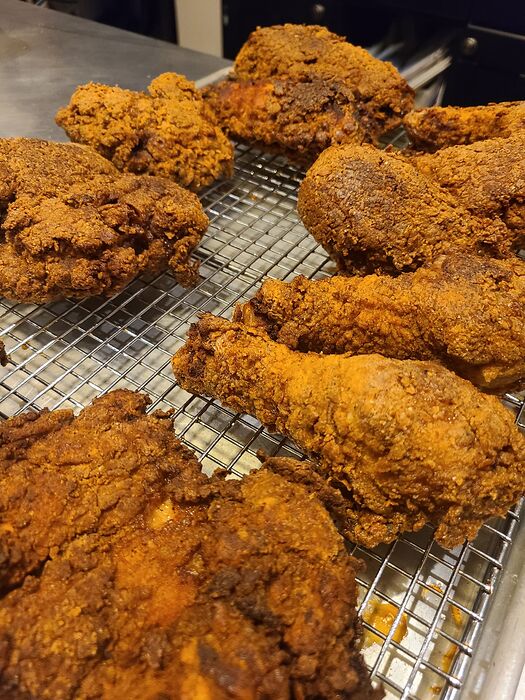 Incredible. DH has decreed that we will have fried chicken for all future Thanksgivings. We’ll see if he still feels that way after eating the leftovers for the next three days! 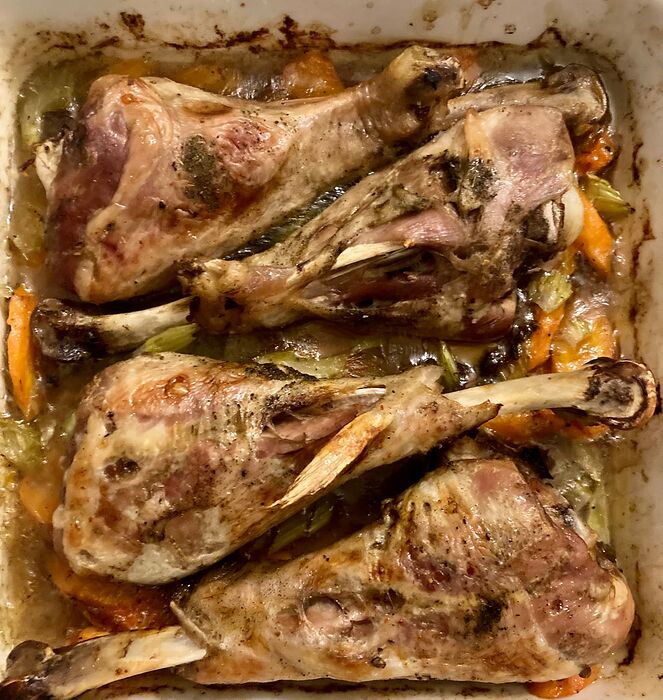 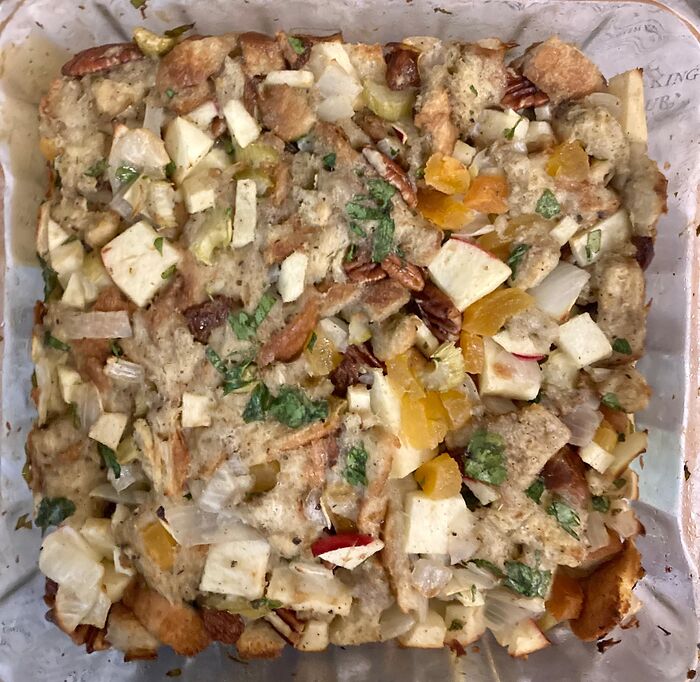 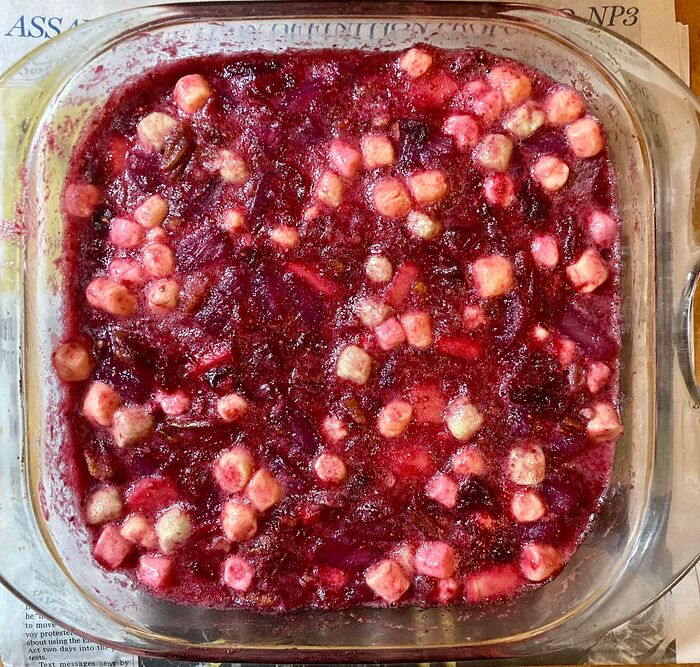 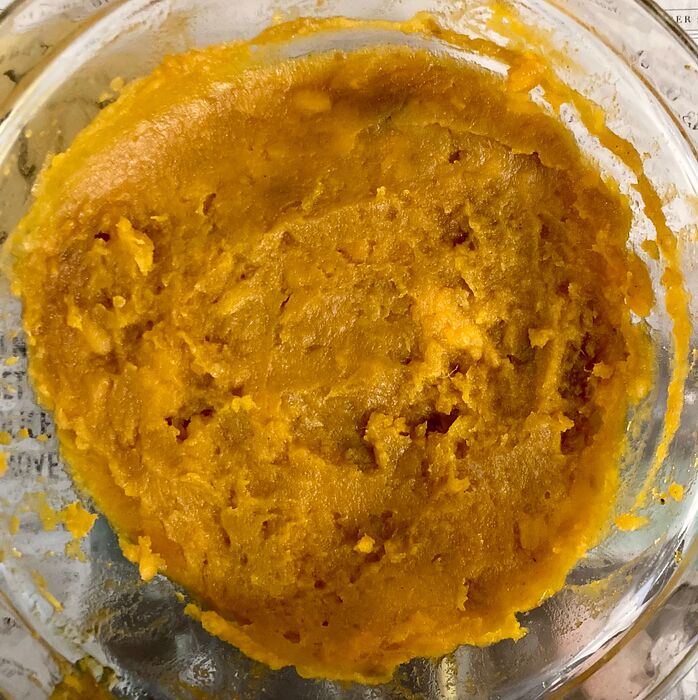 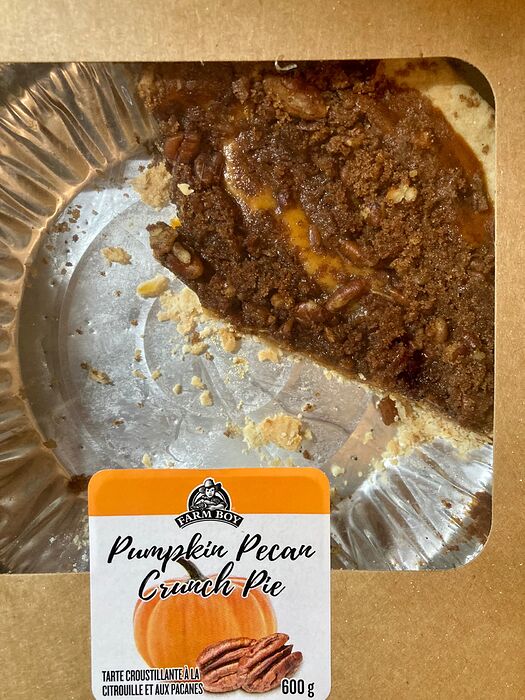 Mushrooms out of the oven, about to be wrapped in a heavy towels and taken to neighbors Thanksgiving dinner. Big hit , thanks for Boursin suggestion @ElsieDee! Lots of other good food and 6 new people I now know from the area. Fun! 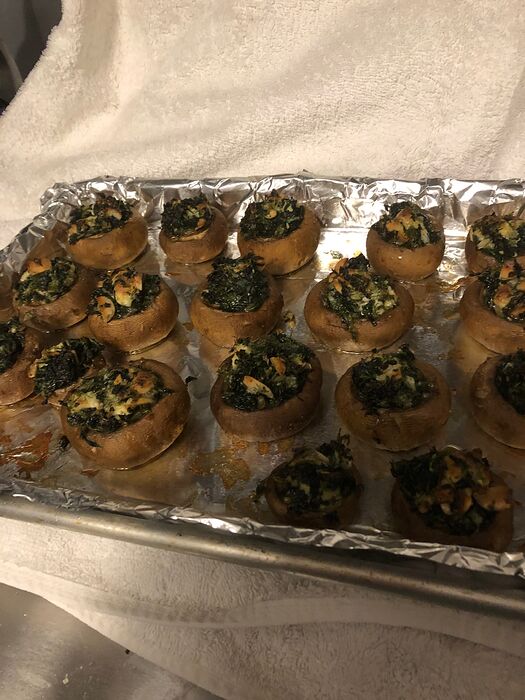 My DH would jump at the chance for fried chicken for all future Thanksgivings, especially if there were leftovers. I don’t think I’ll even mention your post to him!

My husband’s crew was on shift today at the fire department so we went to eat with them. It was fantastic. Turkey, dressing, perloo, deer blackstrap , tons of sides. I made macaroni and cheese, mashed potatoes, yeast rolls and gravy. Also many desserts. They got a call towards the end so my children and I started the cleanup. It was a really lovely time.
I will cook on Friday

We spent Thanksgiving with our friends who are great cooks. They made whole brined roasted turkey, seared venison, roasted carrots, aligot potatoes, dressing, cranberry sauce, buttermilk biscuits, and a charcuterie and cheese platter to start. Our contributions were fancified Campbell’s green bean casserole, corn pudding, wines, more cheeses for the platter, and a humongous pumpkin trifle (all from scratch). 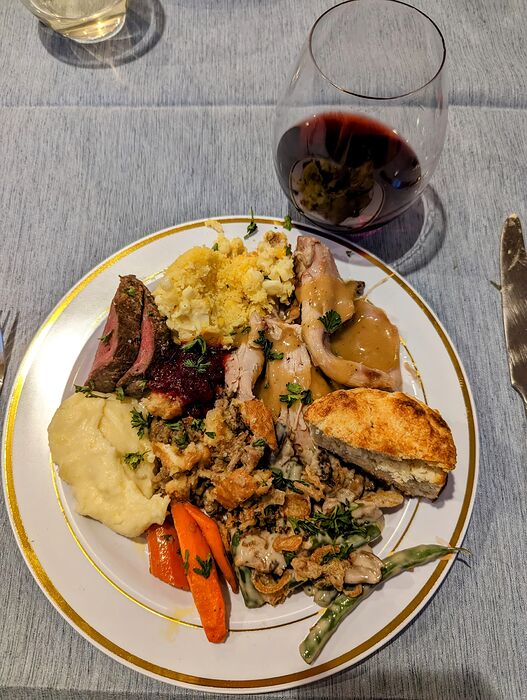 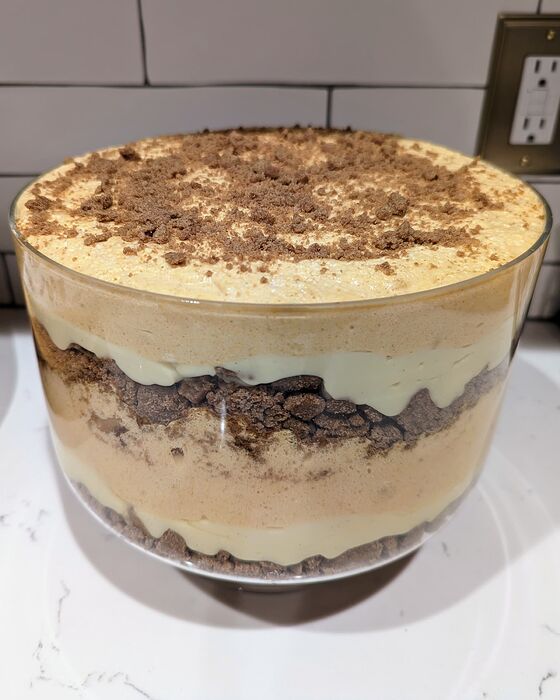 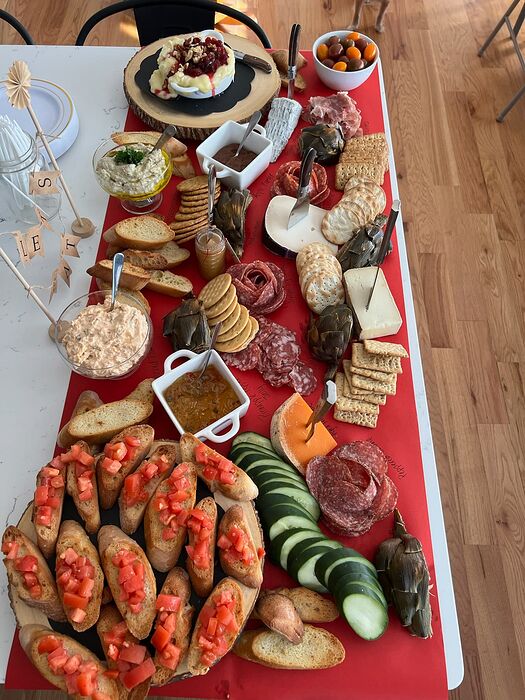 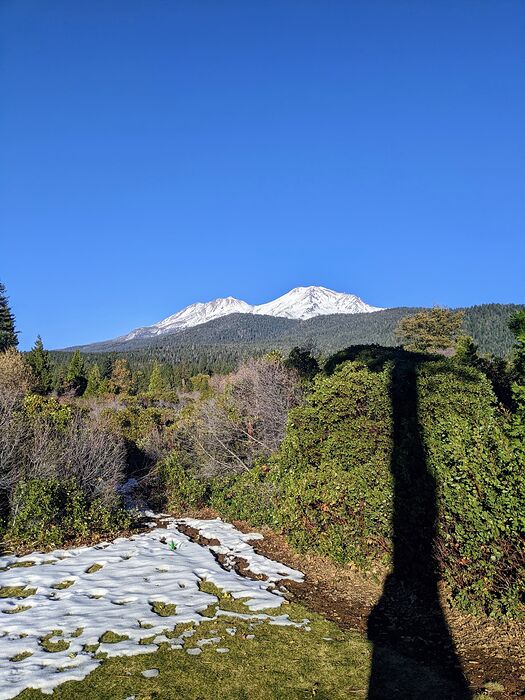 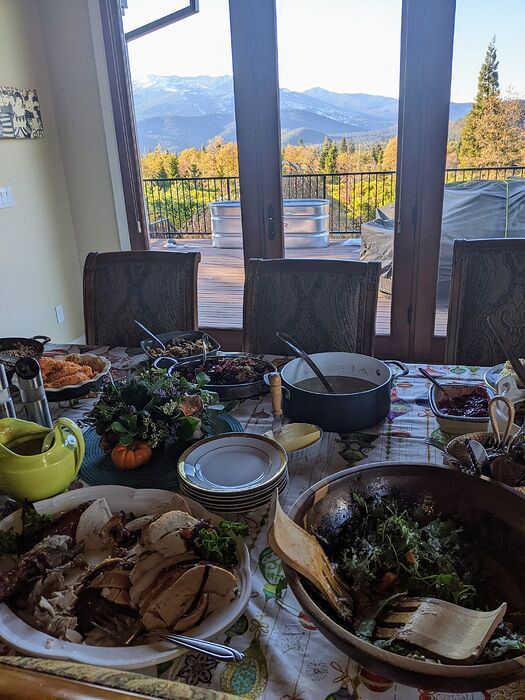 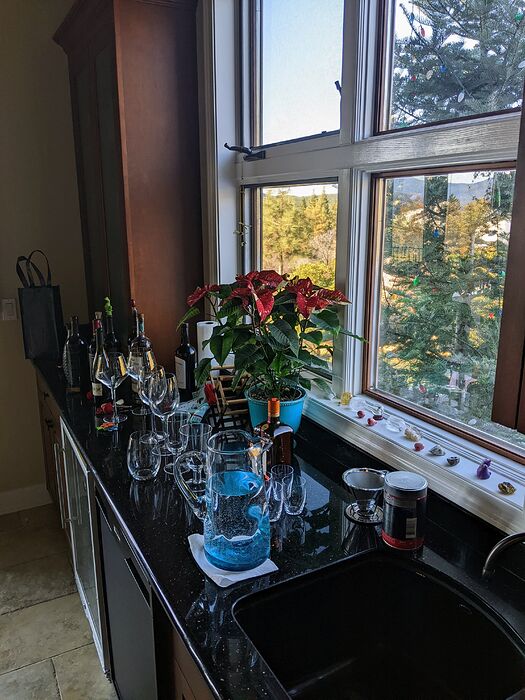 To drink there were blackberry-lime shrubs, mine with a shot of apple liqueur.

We ate by candlelight – it was nice. 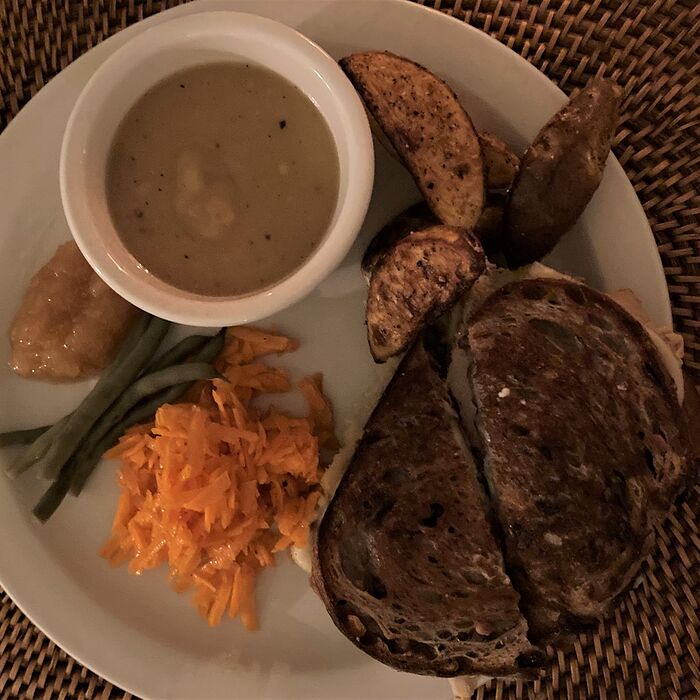 Lusting for that trifle. Just the two of us. We had a great feast, but failed to acquire dessert - tomorrow will get a pumpkin pie and a can of whizzed cream.

Yeah. My 3 daughters convinced me that “no one wants pumpkin pie” and made two types of pumpkin muffins instead.

Turns out they’d failed to consult their younger brother, who’s a bit… um… conservative and set in his ways for a HS senior.

He really missed the pumpkin pie, as to him it’s a big part of Thanksgiving. It’s hard to know where and when a teen boy will be sentimental about stuff, given half the time they (he) seem(s) as if he couldn’t care less about tradition.

He and I will make some pumpkin pie tomorrow.

Had dessert late and then finished clean up. The Cookery’s (restaurant in Dobbs Ferry, NY) Pouding Chômeur. Basically a light cheesecake souffle cooked in maple syrup, then inverted: 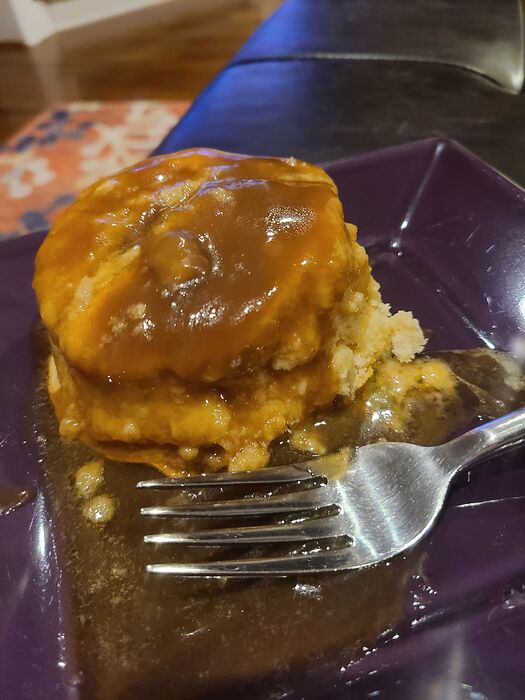 Good, but incredibly rich and sweet. The tang of the cream cheese helped, but it was still a bit one note (and I LOVE maple). I would make smaller servings (the recipe calls for 6 ramekins but I think it could easily be stretched to 8) and maybe serve with a tart berry compote for some contrast.

Thanksgiving Day dinner was at my sister’s SIL’s house. This was my sister’s plate, as I had already dug in. LOL

Desserts were store-bought apple, pumpkin, and chocolate cream pies with Brigham’s vanilla ice cream, as well as a coffee cake.

I brought 2 bottles of Silk and Spice red blend, a bottle of Kim Crawford Sauvignon Blanc, and a bottle of Raeburn Russian River Valley Chardonnay.

I’ll be cooking my own Thanksgiving meal on Saturday. So I’ll probably post another picture or 4. 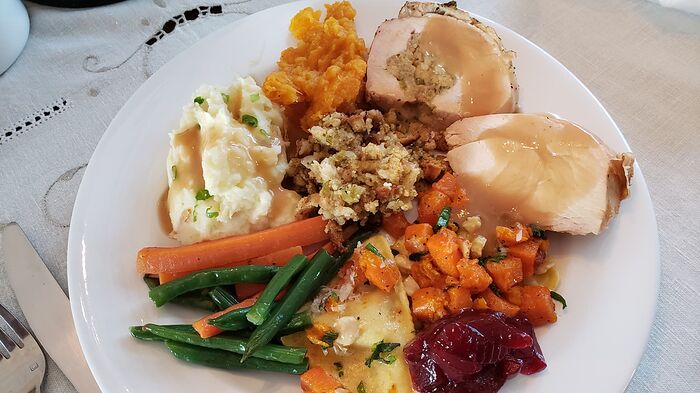 The finished product was well worth the effort. I already put a couple pics up in the WFD thread, but here’s some for this T-day thread. For, you know, completism. 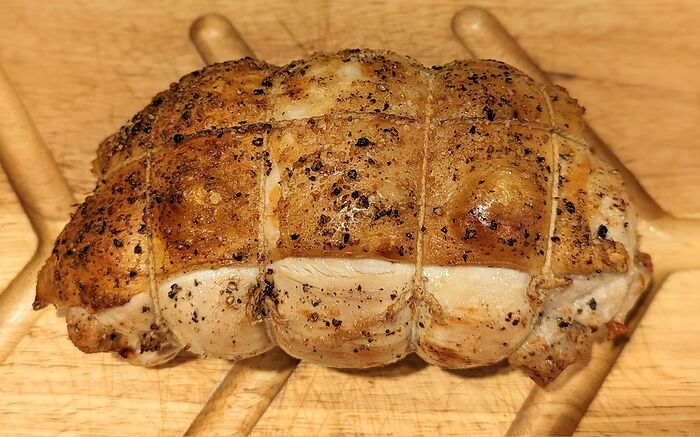 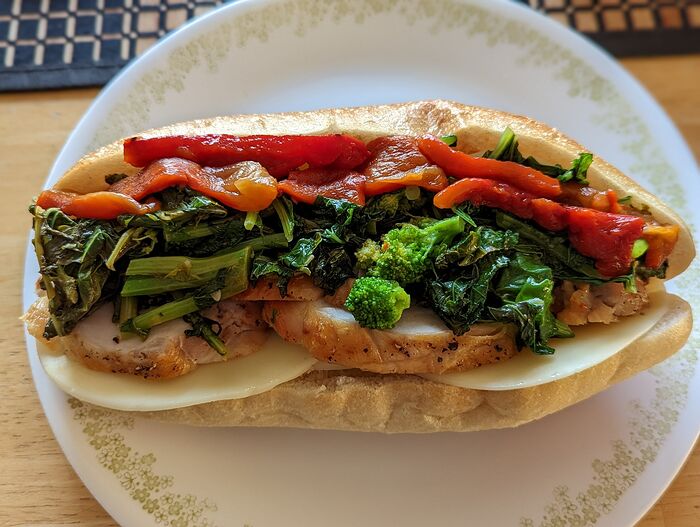 Small gathering, just me, spouse, and #1 son. Younger one is in AU and actually made a thanksgiving dinner for some of his workmates.

Everything turned out really well with minimal fuss. I made a couple of the sides yesterday while participating in meetings and did the rest after the annual 5 mile turkey trot.

No turkey, no stuffing, no cranberries. I dry brined and grilled pork tenderloin and made green chile mashed potatoes, curried pearl onions, roasted brussel sprouts and carrots with a hickory syrup glaze, chimichurri, and purchased rolls. I had a baking disaster involving apple hand pies sticking to the baking sheet but once they were covered with pecan bourbon sauced and vanilla ice cream, delicious.

Spouse made a specialty cocktail. 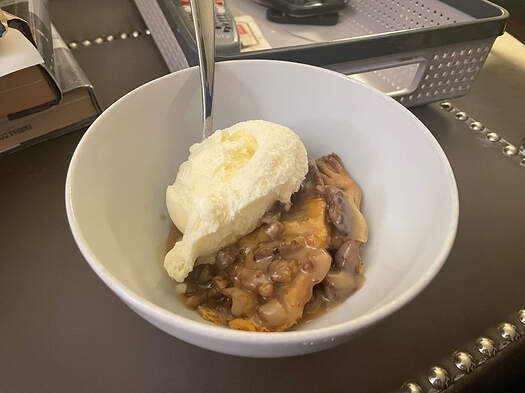 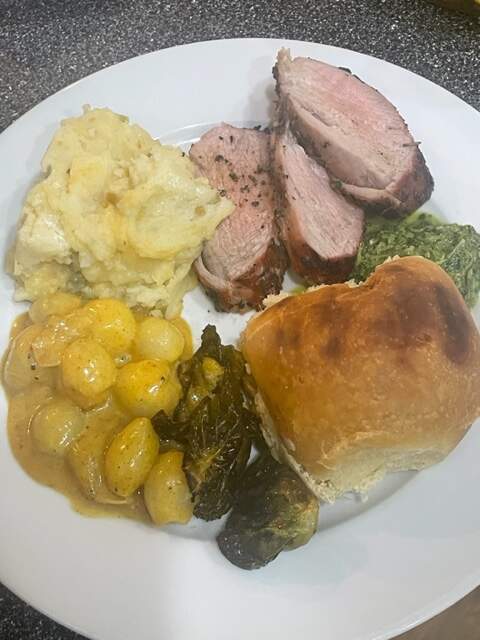 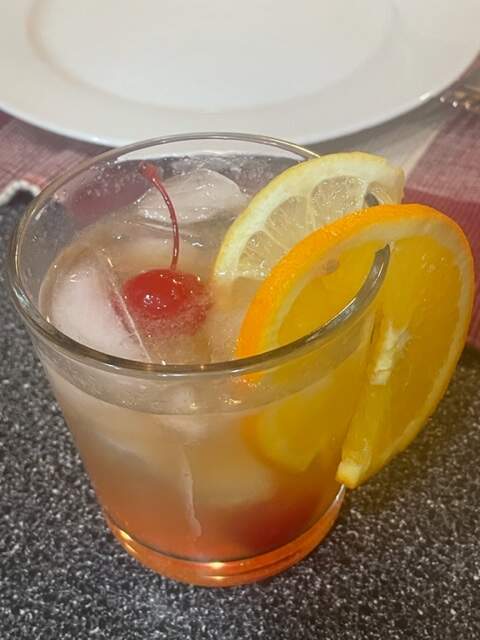