Just a quick report back, the kid made his way home nicely. Amtrak was an hour delayed and he was starving, and I was worried he’d miss his connecting bus bc their status on website showed it already departed when it hadn’t. But all was well. And the straight-ahead turkey breast roast was done as a torchetta and came out wonderfully! Thank you to @Amandarama. My younger son said he doesn’t generally like the turkey and this year it was his favorite item. That’s big props.

I didn’t think it cast you in a negative light. If I were less ruled by my palate, I’d be a vegetarian. As it is, for decades I’ve eaten less than half of the animal protein I used to, and with the advent of Impossible Meat, the flavor and texture of which completely fool me, I may yet get to true vegetarian. Not only are YOU happier not having to impose your menu needs on your family, it is probably a more enjoyable repast for the carnivores, some of whom feel guilty dining in the presence of a vegetarian or vegan.

Since you mentioned apples, if you like a crunchy, tart-ish apple, look for Snapdragon apples in your area. Not only yummy, but GREAT keepers. I spent most of last winter in a hospital and nursing homes. A friend brought me a bag of Snapdragons, which I rationed. I had no alternative to keeping them in a cabinet, and they lasted over three weeks. The final one was no longer crisp, but it had no brown, soft spots. They are so great eaten out of hand that I have yet to make baked apples or pie with them. They can be ordered, expensively, from Yes Apples.

I could easily be a vegetarian, but without the fake meat. I cannot imagine voluntarily eating that stuff. And if I had to hunt, kill and butcher an animal - just give me eggplant. My husband fishes on Cape Cod bay and I told him years ago if he brought home a fish he had to bring it into the kitchen as if we bought it in a fish market. I don’t have any qualms about chopping vegetables, but I do not want to see the process of dissecting a fish or an animal.

Thanks! I try never to make non-vegetarians uncomfortable…I’m not judging anybody. But I know it can be stressful to host me, even though I’m perfectly happy as long as I have some bread or a potato or something.

I checked Instacart and Whole Foods, but there’s no sign of any Snapdragons in my city. I’ll look out for them, though. Sometimes we just catch on to things a little later than the rest of the country.

Yeah, on one hand I think it’s great that there are so many imitation options for people who would otherwise have a hard time becoming vegetarian/vegan. On the other hand, it seems like it’s getting increasingly hard to find vegetarian stuff (restaurant offerings, frozen dinners) WITHOUT meat and dairy substitutes, which are generally just not for me.

Thanksgiving at sister-in-law’s was a great family gathering of 13, with her sons, their spouses, 4 grown grandkids and a (maybe soon fiance) girlfriend of one. The surprise to us was that they’d decided on ham as the main (no turkey) and no potatoes or gravy. I brought whole wheat beer bread and made cinnamon-sugar spiced pecans the evening we arrived, and helped SIL make broccoli salad and BIL baked beans. Most of the sides and a pie were made by sons/spouses. We had a wealth of sides - no one went hungry including the vegetarian granddaughter: Cold : veggies & hummus, devilled eggs, canned cranberry sauce, jello-fresh cranberry sauce, broccoli/red grapes/cashews salad, pasta salad, beer bread, King’s Hawaiian rolls. Hot: corn casserole, green bean casserole, dressing, sweet potatoes w/marshmallows, BIL’s baked beans. Homemade pies: apple, pumpkin, lemon meringue, four-berry, with vanilla ice cream optional. Sweet snacks: glazed Chex w/ M&M’s, my spiced pecans, Andes mints.

Conversation, card games and much laughter after the meal, then leftovers were packaged up and taken by all for next-day enjoyment. My husband took on the task of loading the dishwasher twice to take care of almost all the cleanup, with sons/grandkids handling the unloading. Workload and enjoyment for the day felt fully-shared.

We don’t have phone/internet coverage at their rural home, and they choose to have only what they can get via a limited cellphone carrier, and broadcast TV with an inadequate antenna for their river-valley location. We like to visit them, but appreciate regaining our connectivity about 10 miles from their home.

My family and I just don’t plan Thanksgiving dinners together and that’s an arrangement that we all prefer!

My husband and I are in this situation now too. Changes in family dynamics and work obligations (big deadlines that affect ability to travel) mean that traveling for T’Day isn’t practical for us at this stage. We’ve always been the ones expected to make the trip. Others don’t want to travel to us, so everyone doing their own thing has become the happy solution. Being real about what works has helped us all.

Since you mentioned apples, if you like a crunchy, tart-ish apple, look for Snapdragon apples in your area.

In our area (the southwest) our new favorite apple is the Sugar Bee. Very sweet, but with great flavor, and super crisp. We still love Opals though, which are a bit tarter, and oddly, don’t brown after being cut. We also really like Cosmic Crisp, despite their expense. Haven’t seen those yet this year, though.

We had a discussion about haggling and returning things to the grocery store. My daughter said she was not familiar with returning food to the store. Cousins said " take back food …open…“it didn’t taste like you said it would!”.

For baking I prefer Granny Smith but Honeycrisp are on top for eating fresh.

Of course, Trader Joe is happy to take things back … makes me more willing to try new products. I took 365 Ricotta (house brand) back to Whole Foods, it had zero flavor. They were fine returning my $. (I really like the 365 Italian olive oil!)

I see that yesapples.com lists Snapdragons as available at Costco but IME individual Costco location inventory varies a great deal from one store to another.

I tried Cosmic Crisp last year from Wegmans. They were small but great…pretty similar qualities to Snapdragon. The CC this fall from Walmart were larger but blander and less crisp.

Ok, finally got around to cooking my personal Thanksgiving day meal today.

Scooby Snacks around 11 a.m. of Manchego cheese and quince paste, topped with a Marcona almond; prosciutto; red grapes; Wegmans cave-ripened mild Triple Crème cheese with rosemary/sea salt crackers; cashews; and clementines. I won’t win any charcuterie board awards, but it tasted good to nosh on while I was preparing other dishes for the day. 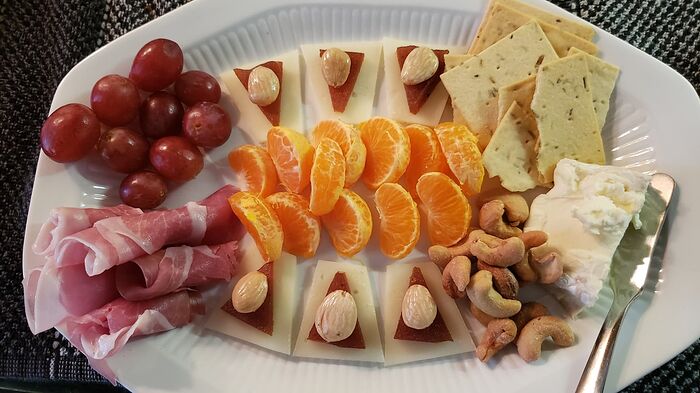 Dinner was a roasted turkey breast, dry-brined for 24 hours with kosher salt, freshly ground pepper, minced fresh rosemary and dried thyme, roasted at 325° for about 2 hours, with homemade gravy. 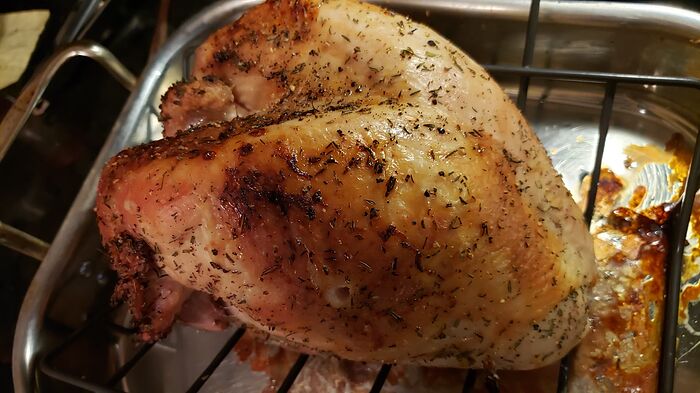 Sides were sour creamy mashed potatoes; roasted halved Brussels sprouts and sweet potato cubes, drizzled with olive oil and maple syrup, and tossed with some fresh and dried cranberries and whole salted almonds near the end of roasting (supposed to be pecans, but I didn’t have any in the freezer); glazed carrots; steamed green beans with toasted almonds; and homemade cranberry-orange relish. 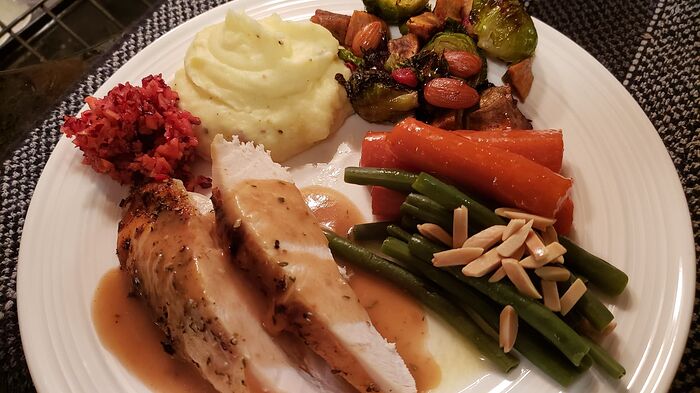 Wine was some 2018 Grgich Hills Estate Chardonnay, and dessert was a slice of a rustic French Apple Tart with some French Vanilla ice cream. 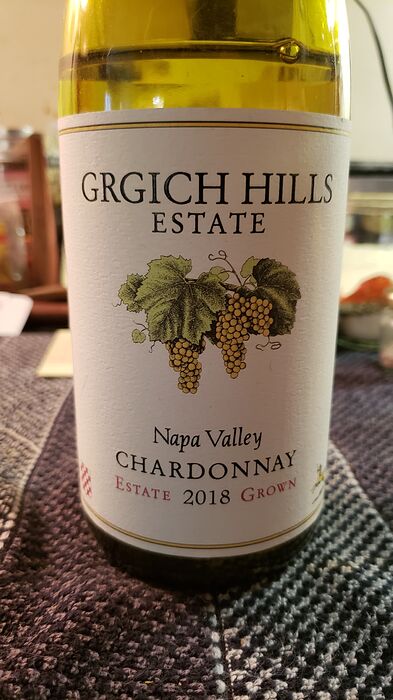 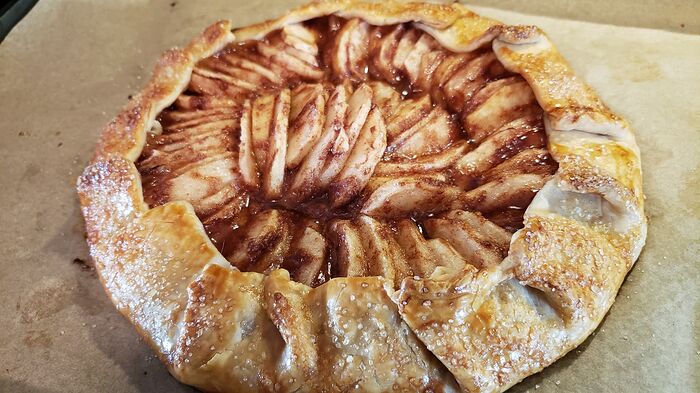 I knew you had good taste. I am not a big Chardonnay fan UNLESS is Grgich Hills. I’m also a big fan of their Zinfandel. Unfortunately it is much harder to find than the Chard.

I NEVER get sick of those. Classic as they get. If I had one whenever I wanted, I would have chowed three writing this post.

It’s all beautiful and inviting!

I knew you had good taste. I am not a big Chardonnay fan UNLESS is Grgich Hills.

It’s a special treat wine for me. Out of my price range for my usual wine o’clocks.

He really missed the pumpkin pie

Meanwhile, my one son is the only one who likes pumpkin pie, and usually I try to do something pumpkin-y, cause love, but it’s a lot of work. I personally love pecan pie, and never get or make it because my other son has allergies, and it’s just easier not to introduce those into the environment. My FIL who came to dinner had a party the day before as a client of a realtor, and they were all promised a pie to take home. Apple, pecan, or pumpkin. So I said - bring pumpkin. He likes it, kid 2 likes it, I don’t have to bake one. Win win win. What happens? Kid 2 overeats on t-day, and has no room for dessert. On day 2, he has one slice of pie, and grandpa takes the rest home. It was a huge one too - 12" in diameter. Meanwhile, I still haven’t gotten my pecan fix! If I’d asked for pecan, I would have taken much more than 1 slice. Lesson learned.