Last year’s were a miracle, because it started as a soggy mess from the suggested amount of broth, and I had no more bread to fix the problem. But I finagled it and they ended up drying out enough. Also, delicious.

Recipes suggest an egg to bind, but I don’t like the egginess vs the pure flavor of stuffing.

So I’d say, stick with the obscene butter suggested on the box, but add the broth in stages, just enough to fully moisten. I’m going to scoop and bake in muffin cups to give them some support re shape. Maybe some mix-ins this year - mushrooms, turkey sausage - in half.

My wife’s family puts the “stereo” in stereotypical Italian family. 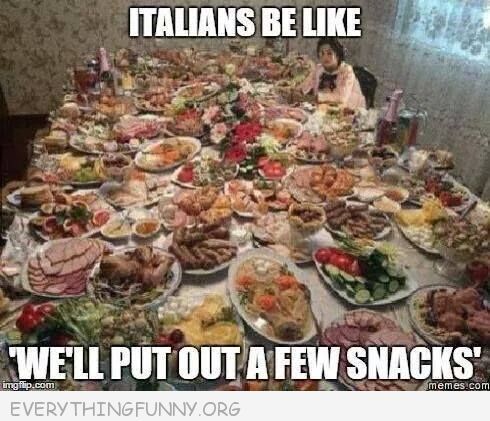 Any suggestion of an item “instead” turns into “also.” We don’t need turkey and ham and salmon and lasagna. Really. Promise.

I just show up and chop things. Try to keep my head down. Try to eat down the fridge and freezer for space so I’m not hauling ice for our Yeti 85.

I made this marinated olives and feta a couple of times this summer and it was easy and delicious, even with olives from the supermarket olive bar and supermarket feta. Also thinking deviled eggs because everyone loves them but they are a pain to make, especially in large quantities. I guess it depends what else I am tasked with as I am quite certain I was invited to stay with the hosts of the gathering as kitchen labor.

We’ll be a small group this year I think, probably just three or four. I dislike turkey so I’m planning to do duck this year, legs confit and breast sous vide then seared most likely. I am the only one who eats the cranberry sauce I make, so I am thinking of doing an elderberry sauce this year instead - should go nicely with the duck, and perhaps it will be more popular. Otherwise, the menu is pretty static - roasted vegetable and sausage stuffing, mashed potatoes, gravy, Parker House rolls, and a green vegetable (still undecided, but definitely a light/crisp preparation of something with citrus to balance all the heavy things on the plate). Dessert will be apple and pumpkin pie, maybe cherry as well (if I do three I’ll make half-sized apple and cherry). I don’t usually do much in the way of appetizers because we eat the main meal around 2 (leaves lots of time for a second meal later in the evening), but I do usually put out some crudites, olives, cheese and crackers and spiced pecans to nibble on with morning mimosas while watching the parade. Maybe I’ll make a batch of crustless mini-quiches instead this year for something a little more “breakfasty.”

Great idea re deviled eggs! I may borrow it…

Also a good vehicle for a variety of different flavorings, vs the rest of the apps and main meal, which are pretty unvarying for our celebration.

Can’t believe I didn’t think of it for Tday. Thanks!

they are a pain to make, especially in large quantities

Huh, I always thought it was a pain to make just a few for myself, because for a larger quantity the mixing can happen in the mini or large FP, and there’s enough quantity of filling for a piping bag (note my ugly spooning of filling for just myself

Kenji did a bunch of variations over at Serious Eats that are really fun.

Tbh, I barely eat turkey at the main meal… more in the sandwich later that night. And then in a glorious mess in a takeout container on the train home

Sounds delicious and different with the roasted veg - do you use a recipe?

I actually created one, based very loosely on a recipe from Epicurious and my best guess at a fabulous stuffing I had at a friend’s house one year. I dislike traditional stuffings that have the texture of bread pudding (and are usually full of chunks of celery), so mine is more of a loose texture, almost like a panzanella. I make my own crusty baguettes and tear them into bite sized pieces, then allow them to dry out for a few days. They absorb plenty of stock and vegetable juices but still maintain their integrity.

For the other stuff, I process my aromatics (carrot, celery and onion) in the food processor for a very fine texture (so they kind of melt away into the finished product), then saute in butter until softened. I roast chopped fennel, halved shallots and cremini mushrooms in larger pieces, then add all the vegetables to the bread along with cooked, crumbled sausage (sage breakfast type), some reconstituted dried porcini mushrooms, a ton of chopped fresh herbs, and enough stock and porcini soaking liquid to make it moist but not super wet. Dot the top heavily with butter and then bake.

It’s a bit labor intensive but 100% worth it. Given the quantity of vegetables, it really counts as a sort of combined vegetable/carb side dish rather than just a starch like most stuffings. It’s also easy to do in advance - I prepare all the vegetables and sausage the day before and store in the fridge (leaving the bread out drying), then just combine it all in a big pan with the stock, etc., right before baking.

So far…
An all you can eat buffet out on Tday. Everyone gets to have their comfort foods of choice, and I get to relax. In the days following, I play in the kitchen at my leisure, & do/make what I want.
Turkey with amaretto stuffing
https://m.cookeatshare.com/recipes/cornish-game-hens-with-amaretto-stuffing-and-honey-glaze-352414
Green beans with lemon butter and frizzled shallots 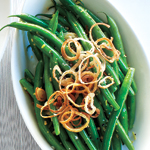 These frizzled shallots are totally addictive and make the perfect crispy topping for this holiday side dish. You can also use them to garnish other vegetables, including mashed potatoes. 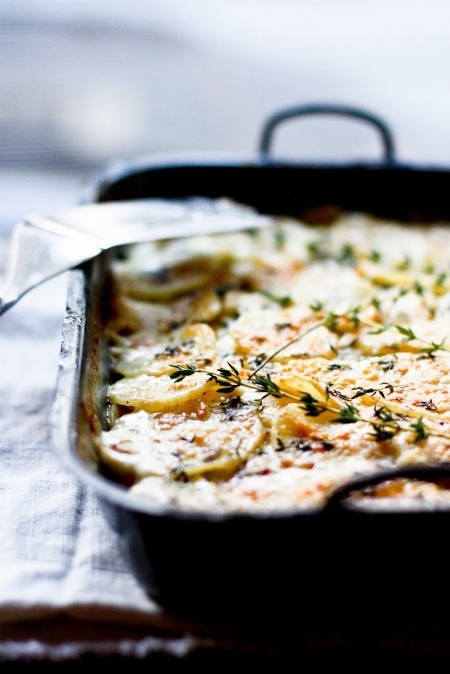 The humble potato has been a staple in what I would call my culinary heritage. Whether boiled or buttered, mashed with buttermilk or baked in cream with a blanket of cheese bubbling on top in one form or another, makes the potato irresistible. I...

Cocktails & endive filled with apples, Bleu cheese and walnuts or pistachios before dinner. 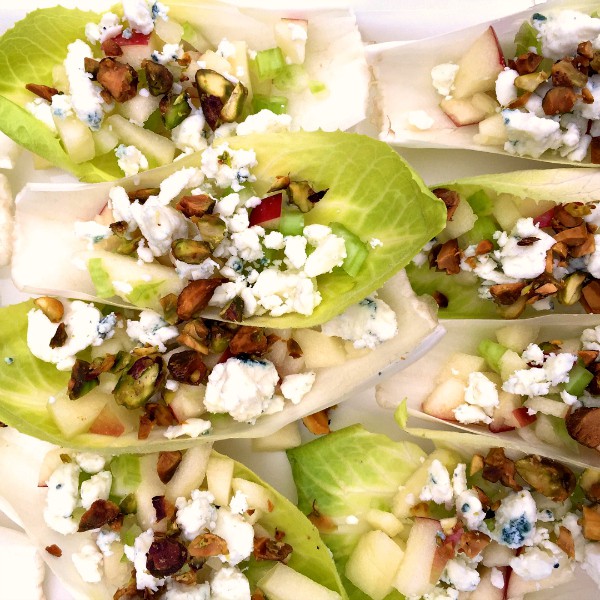 I love a beautiful kind of hospitality, inviting new friends to dinner, creating a simple menu a with Apple Endive Appetizer recipe.

I am going to a huge (50 or 60 people) family Thanksgiving in AZ which is by tradition a potluck and BYO situation.

I will be traveling to TX again this year (in on Tuesday, out on Saturday) and will be the one cooking T-day - yes just me. Unfortunately the Air BnB we’ve stayed in before is booked, so we are stying in a new place. So I have no idea what is or isn’t in the kitchen (I had left several things in the previous place so I had them from visit to visit).

Our menu will be the same as always - I don’t have the time to experiment when traveling and unfortunately I can’t do anything ahead of time (I usually make rolls and freeze them, turkey stock and freeze, pie crusts and freeze . . . but not an option).

Ugh, the thought of having to do it all is giving me the shakes. It’s the same meal every year, though usually I do 1 or 2 things new for each year - but hell no when traveling and doing it all in a day essentially.

The rolls and pie crusts will be purchased, everything else from scratch. I’d cut things but someone will be upset that I cut “their favorite part of the meal”. So it’s just easier.

I was surprised how many “it will be fine” foil pans, and plastic serving containers I was able to find at the Dollar Store, Grocery, and/or party city (thanks to previous posters on other threads for the suggestions from previous years). . . . so I’ll just deal with what I can find once I’m there.

Ugh, the thought of having to do it all is giving me the shakes.

It does sound daunting. I would be packing my favorite potato masher too.

I used to do the Thanksgiving Day dinner at Mom’s, but I will be at Mom’s assisted living home this year, as I was last year. As long as she’s alive and able, I’ll be with her. My sister and BIL will likely join us before heading up to his mother’s house for dessert.

The home did surprisingly well last year with a beautiful roast turkey they brought out to show the residents and family members who were joining them before carving it up (or spiral sliced ham if you wanted it), gravy, cranberry, stuffing, mashed potatoes and some veg - I can’t recall what. I think dessert was apple or pumpkin pie with vanilla ice cream. There’s no wine, so I’ll have that when I get home.

I expect I’ll cook a small turkey breast that weekend, as not cooking for Mom anymore doesn’t stop the urge to want to make a Thanksgiving dinner. I’ll just keep it on the smaller side, since I’m only going to be feeding myself. And I refuse to go anywhere near retail stores that weekend.

I think @Karen_W has just provided my two side veg with the green beans with frizzled shallots (which I think I made once for Mom and she didn’t like them) and Julia’s Potato Dauphinoise. If I screw up the taters, it’s only myself I’m disappointing. And since I’ve done that countless times over 40+ years of cooking, I don’t feel so bad anymore. I’ll just have more wine to comfort myself.

I’ll make an apple or pumpkin tart. And I’ll open a really special bottle of wine from my stash.

What about a good set of knives? I’m assuming that can be packed as well since you won’t know what condition the knives will be at the AirB&B? Otherwise, I think you’ve got a good list of “required items”.

GretchenS - ah yes, the potato ricer should be on that list too! Good call.

I would love to travel with my knives but with security the way it is and the airlines loosing my bags all the time - I try to only travel with a carry-on . . . . last year I just bought a dumb grocery store/target knife, which actually did fine for the one meal. So that’s my plan again.

Thankfully, it’s in AZ, so outside is a definite probability for the overflow seating. Which it most definitely wouldn’t be here in New England. LOL

After being duly admired, the show turkey goes to leftovers and sandwiches. I love the practicality of this for two-turkey gatherings.