Tell me about your counter depth fridge

I’ve been told my current fridge is too big for the space. I never thought twice until posting about another kitchen question and got a lot of replies to buy a smaller fridge. It sits opposite the kitchen island and with doors open, no one can pass by. So I’ve been looking to buying a counter depth fridge but worry about the inside space. My current fridge is 31sq ft and I use all of that space. I could keep this fridge as a secondary storage space or just get another fridge of similar size. I don’t think counter depth would add much useable space to the kitchen though perhaps more aesthetically pleasing. I took a look this afternoon and they seem limited such that I would need the spare to function (thinking of the spinach containers and sheet pan currently sitting in my fridge that wouldn’t fit comfortably). What’s been your experience with counter depth fridges both good and bad? 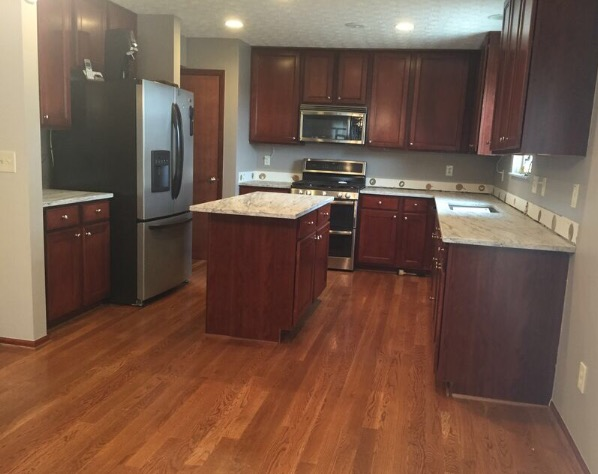 We only have the option of using counter depth refrigerators because some genious architect decided it would be a good idea to put the kitchen on the second floor with the only way up being a 3’ wide stairway ending with a 90° turn. The LG LFXC24726S we purchased last June has been pretty good, depth of 43" with the doors open. 15.8 cubic foot refrigerator, 7.9 cubic foot freezer. The ice maker is located in the door of the refrigerator and has a pretty small capacity, so if you use a lot of ice it could be a deal breaker.

We had a GE Profile counter-depth fridge in our previous home. Counter-depth was required, as in your case, because of the proximity of the island, with the sink, etc. directly opposite. It also looked better better because of the depth of adjacent counters. It was about 23 cu.ft. and was just fine, but we had another large fridge in the garage for those times we needed more space AND because we’re Costco shoppers.

The only issue we came across was that, when we thought we had a terminal technical problem with it, our home warranty company said they would only replace it with a full-depth model. Luckily they were eventually able to repair it because counter-depth units are much more costly (apparently due to engineering issues in manufacturing).

So… the only real concern I can see is how much fridge space you really need. We now live in a place that doesn’t have enough room for a full-size garage fridge, so we use a countertop (dorm ?) unit that sits on a shelf. Works just fine for us now, though it’s very small. Being empty-nesters, it’s not really a problem.

So what happened here . Did you have your kitchen remodeled ? Or you bought a new fridge . Looks like the island is pushed close to one side . Rule of thumb always alow 36" minimum between refridgerators, cabinets , and the island so you can walk through . Here’s something for you about counter depth fridges https://www.youtube.com/watch?v=W2BxH9ImPKU

I built a new kitchen about 18 months ago and installed a built in fridge. It fitted behind cabinet doors so needed to be no more than 600mm wide (about 24inches). The kitchen sits in the living/entertaining area so we didn’t really want any of our appliances on show.

The biggest I could find that fitted was about 9 sq ft (216 litres) which was a lot smaller than the 18 sq ft we had used before so we put the old fridge in the utility room to give us 27 sq ft of fridge/freezer.

How has it worked. Its been pretty good, we have moved the larger fridge from the utility room which was down a flight of stairs to a large cupboard in the hall on the same level. Before we did this we were getting annoyed at running up and down stairs to the fridge, the new position isn’t a lot closer but no stairs make it far easier and less of a phycological barrier.

I have found we quickly came to organise the fridges differently. The small fridge has all the sauces and condiments for cooking; the milk and butter we use every day; cold water and juices; ice for drinks; open bottles of wine etc. It has space for dishes getting cooked i.e. keeping prawns cool after they are cleaned but before they go on the stove. The big fridge is filled after the weekly shop (its near the front door so convenient) and has all the vegetables, fruit meat, dairy, beer/wine and soft drinks and pre-prepped frozen dishes.

When I cook I just go down to the big fridge and get out the ingredients for that meal and move them to the kitchen and/or small fridge. In hindsight we probably could have had a bigger fridge to freezer ratio in the small kitchen fridge, as we only really use for ice) for drinks) and frozen pastry - but there aren’t too many options with these size fridges it seems to be 50/50 or 100% fridge with no freezer.

Overall we are really happy with the two fridge system although it takes a little while to adapt.

One observation about your kitchen - your top cabinets are quite shallow. If you put in a fridge that comes to the counter edge it could be good to install top cabinets that do the same so it looks neater. You could even lose the small bench and add a floor to ceiling cabinet next to the fridge to give extra cupboard space. Overall far neater.

My current 25 cu ft fridge is packed as I shop once a week including at Costco and make homemade kombucha and kefir. I’ll keep this one as a spare but rather not rely on a spare to be functional. Counter depth saves about 5 inches which isn’t going to make the space between the island and fridge any more useable. The smaller look nice but are so small.

I bought a house and it came like this

I didn’t design the kitchen. The fridge came with and now I need a new one because freezer is on the fritz. I presume they lined up the island with the oven and ignored the fridge issue. I can walk through with doors open but I’m not very big, anyone bigger would have trouble but the kitchen is what it is now.

If it works for you and you need all the space, keep the big fridge. Yeah, it dominates the room but whatever, it’s the kitchen! If traffic flow is the concern, could you trim that side of the island countertop? From your pic it looks like the side by the fridge overhangs by 4-6 inches.

I put a counter depth fridge in my very narrow galley apartment kitchen, and I didn’t mind it - for two people, it was an adequate size, although freezer space was always at a premium. Not being able to fit a full-sized sheet pan easily was kind of annoying too, but I found workarounds. However, we recently moved to a house with a much larger kitchen and a full-sized fridge, and I am definitely enjoying the extra space. In your case I would keep the full-sized fridge. A counter depth model might make the space flow better visually but I would take the extra space over the aesthetics any day!

“Counter depth” is deeper than built-in. The former’s body usually lines up with the counter edge while the door still protrudes a bit; a true built-in’s doors are flush to the counter edge. The built-in’s mechanicals are on top and make the appliance taller, necessitating different over-fridge cabinet, if any.

Keep big fridge, live with it until budget allows you to relocate the island to the front of the photo with the drawers facing the stove and some nice stools for the front. Buttah.

That would be amazing. Walking around to the drawers bothers me more than the fridge.

If you use all of the space in your current large refrigerator then I would not consider scaling down unless you can’t fully open the doors or drawer with the island in place. In the photo it does look like it might be a tight squeeze to easily get things into or out of the fridge and freezer.

Well, to totally derail your original question and get up into your business

, take a look at the flooring around/under the island. If they placed the island on top of the flooring, all that would need to happen is unscrewing it from the floor and moving it wherever you want it and fastening it back down; it’s really just a cabinet with a heavy top. Worst case scenario you would have to have some flooring pieces put in after it’s moved, not much of a deal really. It’s bound to be less hassle than trying to fit all your food into a counter-level fridge for the rest of the time you’re in the house.

Someone else had a similar suggestion. The fridge I’ve picked out is 2 inches deeper than the current (oops) so if worse comes to worst, I can scoot the island over.

I used counter depth for my kitchen renovation and I love it. Thing is, you pretty much have to have custom cabinetry for it to look decent, with only the outer color showing, not the black sides of the box, and without a huge gap at the top. It makes the room seem much bigger (small galley) and because it’s shallow, stuff doesn’t disappear into a deep cavity where you forget about it. I got French doors for space so we don’t block the doorway when it’s open, too. No drink dispenser on the outside, but a chilled small dispenser spout that takes up no room on the inside right inside the door. It’s a really nice built in look for thousands less than a built in fridge. You could just customize the size panel that separates it from the cabinet next to it, and build a nice storage area for seldom used stuff above.

Looks like they no longer make the larger one I bought in plain stainless; I believe mine is either this size or 24 cf… this is how it’s laid out, very efficient storage and easy to get to stuff even when full. http://www.kitchenaid.com/shop/-[KRFC300ESS]-408402/KRFC300ESS/

So nice to see you posting somewhere!

I can fit a sheet pan in mine, on the bottom above the wide drawer, if I have to, and if I want to move stuff around. Pretty sure I’ve done so once, anyway.