I’m reading good reviews about this “hidden gem.” I read that the chef from Dish is here. Thinking of trying it tonight. Has anyone been?

No but funny you mentioned it because a friend of mine just yesterday told me I should try it. (Hey wait AJ is this you??) lol

They only list a lunch menu on their website and are only open Thursday-Saturday for dinner but no menu posted. Their website is really not very good.

Agree about their website. From what I read, it’s a limited menu that chef changes up regularly. They also supposedly offer a nice wine selection.

We arrived last night at 6 to find the small bar nearly full. We took the last two stools. A handful of tables were occupied, more by the time we left. The bartender turned out to be one of our favorites from Charley’s, John. The hostess Erin was super sweet and also had connections with Charley’s, and we reminisced about the old days. Our bar mates were jovial and we enjoyed the local vibe. I wish I had thought to take pics of the menus, but I was too busy making new friends. I’d say that everything that’s on the web page menu is holdover from previous incarnation. John vouched for the sandwiches though. We saw the reuben and it made us drool for our next visit. (We recently had a reuben at Richard’s so that itch had been freshly scratched.) Disappointingly, the fries and onion rings are frozen.

After making me the perfect Cosmo and serving my husband a beer, John read us a few specials. One was tempting to me, a chicken bruschetta dish. I recall a strip steak special and he said that the chef had a few filets that he’d cook however one would like. To keep the diet somewhat in check, I ordered the grilled caesar salad with calamari. It was very good. The dressing, which was drizzled artistically, had some heat to it, which was unexpected but I liked it. My husband ordered the Italian gumbo. He polished it off. I wasn’t even offered a bite. The wine list was small. I ordered a reliable Josh Cabernet.

The chef from Dish is no longer there. This chef has worked at Bueno Sera in Red Bank and I didn’t catch where else. John has such faith in the chef that he followed him here to Tavern 19. Much to his dismay, they haven’t done any advertising. They’re pulling in a good crowd by just word of mouth. One gent to my right, who works for Toll Brothers, says he wants to keep the place to himself while his crew is over at the more crowded, tough-to-get-seat-at-bar Pour House.

The place is spruced up and doesn’t have as much of that diner/Windmill feeling. There’s a two-sided menu in addition to what you see online. I saw pork shops and lobster mac and cheese. I didn’t see the lamb chops that are pictured on the website. I promise to post pictures of the menus. We’ll definitely return.

Sounds like a good experience I look forward to trying it soon, thanks for the report!!

Went back last night for dinner. At 6:30, the bar was mostly full and while we were there, only two tables were occupied. Only the chef and bartender John were working. We sat at the bar where one gent ordered the special appetizer, disco fries. The dish was passed around the bar and all voted it excellent. I passed because even though born and bred here at the shore, I’ve never had disco fries. Why start now? I ordered the salmon from the regular menu, and my husband ordered a special, mahi mahi over rice and with a gumbo-like relish. He loved the mahi. I really enjoyed the salmon, though next time I’d say hold back on the white rice and add more veggies. We saw the shrimp po boy go by and man it looked good! The fellow sitting next to me had had it and said it was messy but worth it. Also drool-worthy as described on the menu was the lobster mac-n-cheese. No sooner did I comment that on my birthday I’m ordering that dish did someone across the bar order it. Wow.

Pics of the happy hour menu and menu (not available online) below. The typeface of the descriptions is really light so didn’t photograph that well. 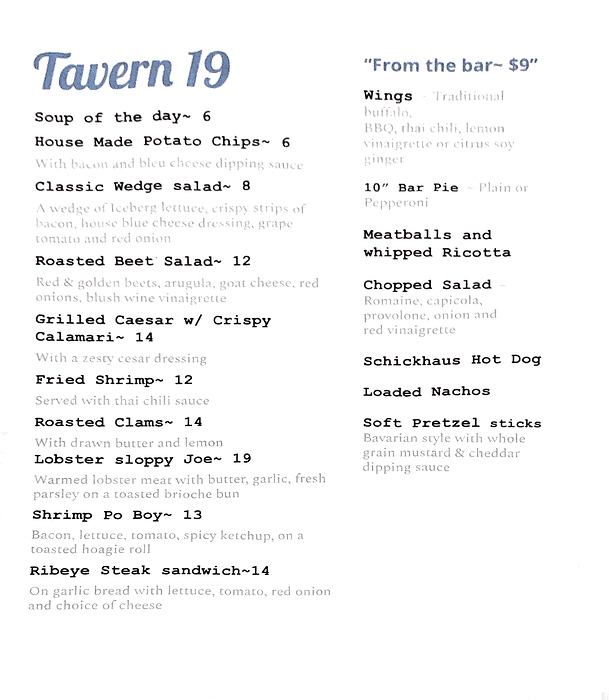 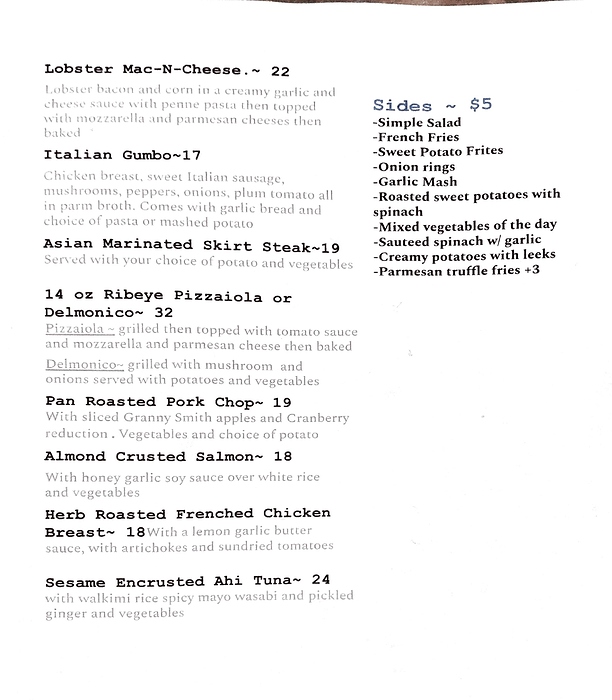 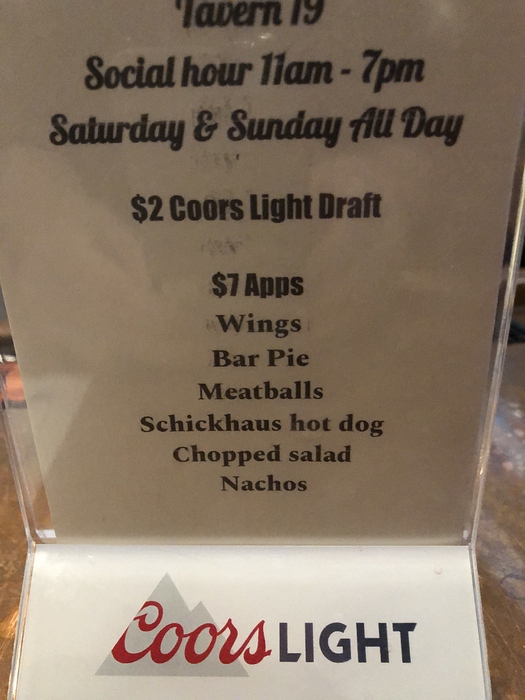 Because they are awesome!?!?!?! It’s not often you see a menu that has both a hot dog and Sesame encrusted Ahi-Tuna! I’m probably going to give this place a try sooner rather than later. I wish the steak pizziaola had peppers and onions.

Too awesome, I’m afraid. John says folks love the tuna. I’m sure you can ask for the peppers and onions.

I wonder how that lobster is. I might have to give this place a shot.

Check the back of your Shoprite receipts for Tavern 19 coupon: buy one entree, get the second free. Limit one per table.

Used one last nite. No problem.

Had dinner last night with my DW & another couple at OAK. Thanks for your recommendation BigG!

Went last night and after the hype on the board here we were expecting great things. It was kind of exciting heading into the golf course knowing that the online menu was not correct and that they do indeed serve a full dinner. We started with a special app of cheesesteak flatbread and soft pretzels with cheese sauce. Both were good, not wow me out of my seat good, but good. We all hoped the mains would be delicious.

About an hour later those mains finally arrived. To be fair, it seemed that they were woefully understaffed, and we arrived early but soon were followed by a bunch more tables. My dining companions said they were coming with our food and my mouth watered with anticipation for the Asian skirt steak I ordered. Unfortunately that was not what was placed in front of me. Somehow the waiter misheard me and I got a triple garlic bread steak sandwich instead. The garlic bread was pretty good, but the steak was not. It was a small, half-inch thick, overcooked to medium well piece of prime rib. I barely touched it.

The women shared a beet salad and an order of broiled fish that they said was alright. The other gentleman had the rib-eye steak pizziola which he did not finish and when asked about said, “It’s not bad.” We left confused and disappointed, wondering how this place had gotten such good word of mouth. We asked our waiter about the chef and he told us that although he himself had previously worked at Dish, the chef did not.

Darn, I was hoping to try this place. I guess I won’t be rushing over

Hmmmm that sucks, why didn’t you send yours back for what you ordered? Similar to @corvette_johnny I was anxious to give the place a try, not so much so now.

Went friday. I really enjoyed my tuna entree for free (coupon) & Head High on tap. My DW had the fillet mignon special & loved it!