talk to me about quinoa

yesterday i bought a bag of red quinoa at trader joe’s and have been trolling the webz for recipes. i have eaten it but never cooked it. looks simple enough.

tell me some of your favorites!

I can tell you to be sure to rinse it first otherwise it will be bitter.

It is not bad as a side with braised dishes or baked in a sort of buttery casserole. Behaves much like rice and can work in a pilaf but i really live it in a citrusy avocado salad. Quinoa holds up nicely in cold salads and looks good too. I improvise and there are many variants on line similar to this
http://gi365.co/food/citrus-quinoa-salad-with-avocado-and-pomegranates/

Yes, it is very important to rinse it. Quinoa seeds are covered in saponin, a soapy substance that protected the seeds from birds, insects etc that would eat them. Even boxed quinoa does better when it is rinsed and drained.

There are many, many recipes for quinoa on the web. I think that in the Andean countries, it was most often used for soup, but it is fine in pilafs and other dishes made with rice, barley, bulghur etc.

Today, I came across some quinoa squash gratins by Martha Rose Shulman of the NYT. 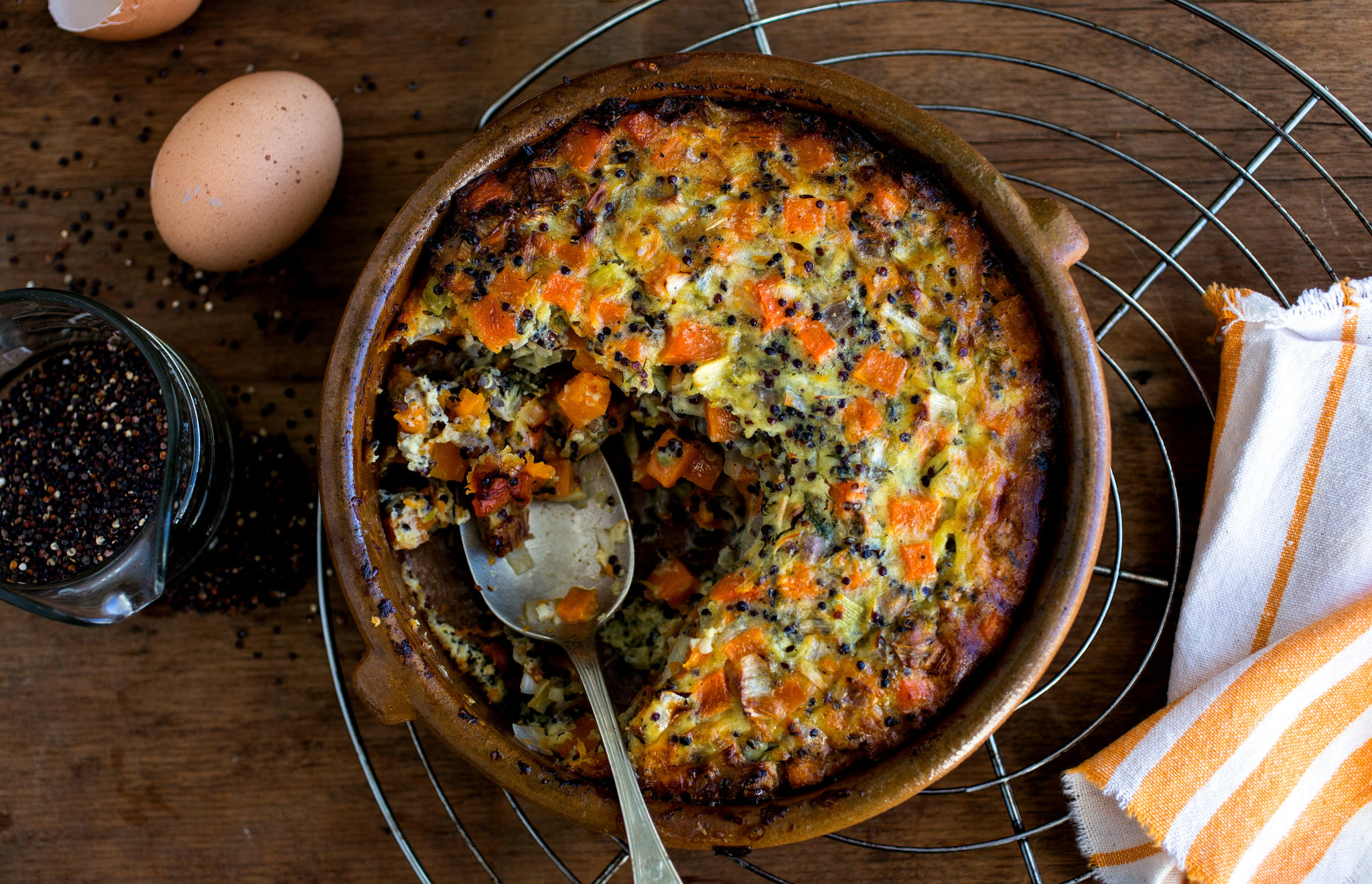 I have given you several winter squash gratins over the years; this is my favorite to date, because of the sweet layer of flavor of the roasted squash and the texture of the black quinoa.

This is part of a feature called “Not your grandmother’s gratin”, and is a nice seasonal dish. I made a variant of it today; I had some blanched collard greens and some spinach left over and some other cooked veg (onions, sweet peppers etc).

I like it best in a cold salad or as an ingredient vs eating it plain as a side dish. Great for cold salads with various chopped veggies and nuts and such, and also works great in chili/stews/soups.
My favorite recipe ever with quinoa is this coconut quinoa granola that i have been making for years- i swap the proportions and use about 2/3c quinoa and less of the buckwheat, i also either use half raw nuts and half salted or i add salt to the recipe. The quinoa gets this puffy fluffy texture So.  Effing.  Tasty. This was so much more simple than I thought it would be. I’m never buying granola again (yeah right), but still…I know what I like in my cereal so why wouldn’t I make it to my … 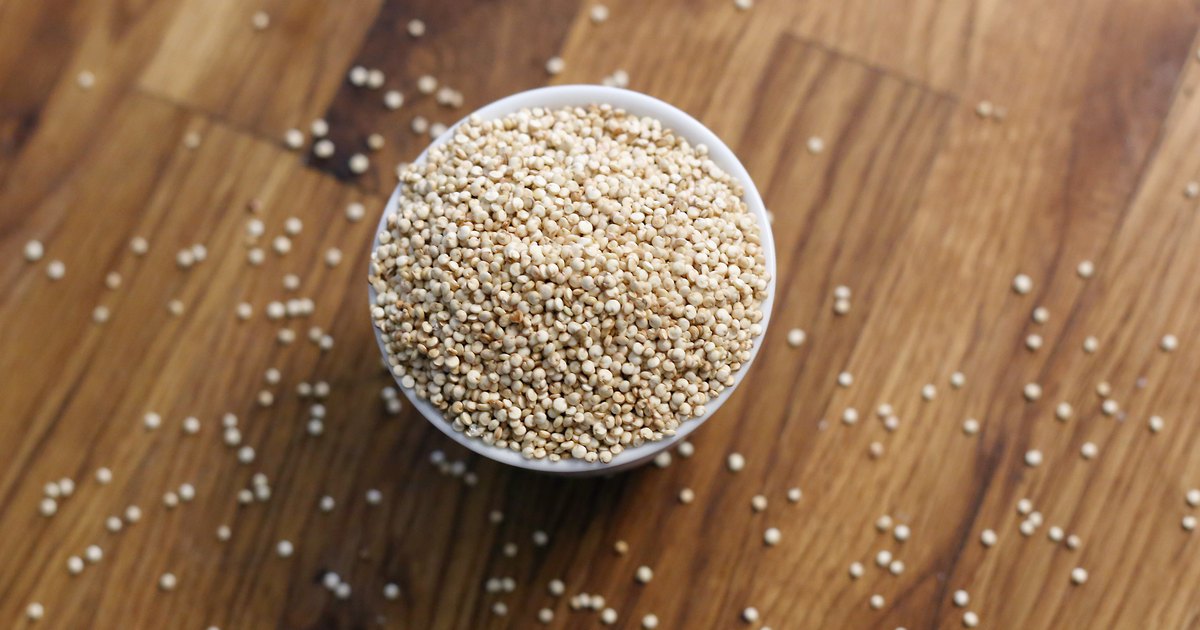 How Do I Make Puffed Quinoa?

Although popcorn is the world champion, some other grains and pseudograins -- such as quinoa -- can be popped or puffed to lighten their texture. You won't get the huge puffy kernels you see in commercial cereal, which are created in a vacuum, but...

I really like it as a porridge in the morning. It has more protein than oatmeal so it keeps me fuller longer. Sometimes I mix it with flax or chia seeds and other grains. Sometimes I add dried fruit or nuts. It’s really versatile that way.

when i began using quinoa several years ago i always rinsed. then i decided to try it without and noticed no difference, so i don’t bother.

i always dry toast the quinoa at least 5 minutes before adding the liquid (2 parts liquid to 1 part quinoa), then let it sit 15-20 minutes before cooking.

currently, my favorite cooking liquid is canned coconut milk that i dilute with an equal part of water. for breakfast, i add a splash of vanilla along with nuts and fresh fruit (granny smith apples, cherries, peaches), or dried (cherries or cranberries).

when i make some parmesan broth, i’m going to try adding sun-dried tomatoes and basil.

when i began using quinoa several years ago i always rinsed. then i decided to try it without and noticed no difference, so i don’t bother.

i wanted to toast the quinoa before cooking and waiting for the wet quinoa to dry would have slowed the process. so, i decided to see what would happened by not rinsing. since i couldn’t tell the difference, i’ve not bothered since.

Usually says as much on the bag, “prewashed” or whatever. I’ve literally never bothered to wash it and never noticed bitterness in the past few years i’ve been making it. (boxed, bulk bins, whole foods, trader joe’s, etc)

i made it on sunday and prior to cooking soaked it for a couple hours. there was definitely a soapy froth that came off and that required several swishes and drainings to get it all gone. i used the nytimes method of 3 cups liquid (1/2 stock, 1/2 water) to 1 cup quinoa. i wound up with about 5-6 cups cooked! LOADS!!!

mixed it whit chopped parsley and mint and have been making a salad with carrots, jicama, slivered almonds and grapes. i like it!

i haven’t had a chance to pick the rinds i need to make parmesan broth, so i make a quick garlic broth to use instead. the quinoa came out great. added sun dried tomatoes (stored in oil), chopped basil and toasted pine nuts. came out great.

I steamed up a batch of red quinoa this morning for breakfast. I bring 1-3/4 cups of veg broth to a rapid boil, add one cup rinsed red quinoa, stir well, turn off burner and let it steam 15 mins. For breakfast, I layer plain Greek yogurt drizzled with honey and lemon juice with the prepared quinoa and fresh fruit. Today, i topped with sliced mango, blueberries, shredded fresh cocnut and bee pollen granules.

The leftovers I will turn into a cold salad. Diced avocado, roasted corn, black beans and red quinoa with a light oil and lemon dressing is really easy and very satisfying.

I use the TJs brand.