Survey: CHOWHOUND or not CHOWHOUND?

1, Yes, but much more a reader than a contributor.

Yes, Yes, home cooking as a rule, but site feedback now, for all pathos and suspense.

Hi everyone! Yes, I’m an exiled 'Hound, delighted to have found so many of you here. But I’m also on FoodTalkCentral.com and there appears to be quite a bit of overlap between the two – same reasons for being here, same goals, same tone. I’m sure many former hounds will be on both because of FOMO, but I wonder if BOTH sites are really necessary.

I was banned from CH because I left a post that mentioned FoodTalkCentral. TPTB have gotten so power hungry, they’ve totally lost sight of the reason CH existed in the first place.

The board I follow most closely is my local board, which would be Philadelphia and its suburbs, but I also enjoy many others including cookware, general topics and home cooking.

Yes, I came here from Chowhound. I first became disillusioned by comments from several posters on boards that I frequented who were uncommonly arrogant and condescending with their remarks towards people who disagreed with them, apparently just under the abuse threshhold so nothing was ever done to curb them. [I REALLY hope they stick with CH!} Then, when the redesigns started, I could barely find my way around. So I have barely even lurked for quite a while now.

As I just became aware of this site today, my time here vs CH remains to be seen, but I am already encouraged.

I live in the midwest, so that will my primary area. But I travel to all parts of the country regularly, so I expect to be looking in on all the regional boards. And I do a fair bit of cooking myself, so I will be popping in there too.

Glad you found your way to the table!

(I have a hunch that HO and FTC are going to end up joining forces at some point…I know the founders are talking.)

Yes, I came from Chowhound (past eGullet, etc.)

I’m probably spending equal amount of time. Posting more here because I don’t feel pressured to produce experienced food journalist-level content (though I will do the best I can). More content over there in general, of course, so until there’s a critical mass here . . . I do hope SF folks will keep pissing contests to a minimum here. Actually, I will come straight out and BEG. That’s my #1 complaint about the SFBA board on CH. Like, let’s designate dish of the month to be margherita pizza, then argue for a few days about what margherita pizza actually is. Please, look at me, I’m on my knees with praying hands, begging. Trying to one-up people is not cool or fun for anyone.

SF board, other regional boards if I’m traveling, home cooking.

I’m another defector from Chowhound. I have no idea how many years I lurked and participated. Sheesh, it’s well over a decade. I wasn’t a heavy poster. I’ve also spent years on egullet but don’t think I’ve ever made a single post there.

I’m no longer spending time there. The redesign has me flummoxed and I just can’t be bothered to figure it out. When the redesign was first launched, I spent a day or two reading the feedback section just to see if I was just an idiot not getting the new design. Turns out, not so much. I don’t have a clue about the weird politics that went on or is currently going on other than a few posts I’ve read in feedback. I’ve been trying to visit HO daily in support.

The board topics I frequent in order of relevance:
Home Cooking
General
SFBA

Ok. 20 hours into the survey, and we have 27 participants and 35 posts. There are a few of you who just joined. For question 2, I put you down as “Not Applicable”. Thanks. 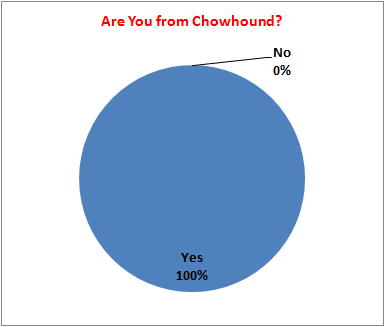 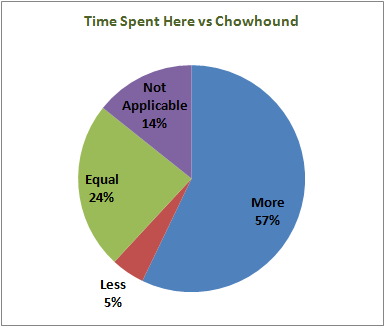 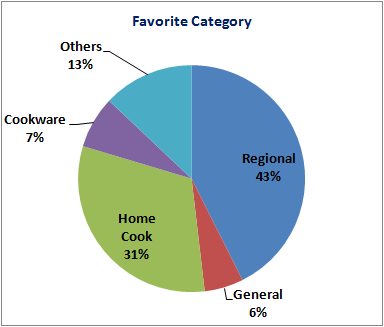 Looks like most people care about regional board and home cook board. 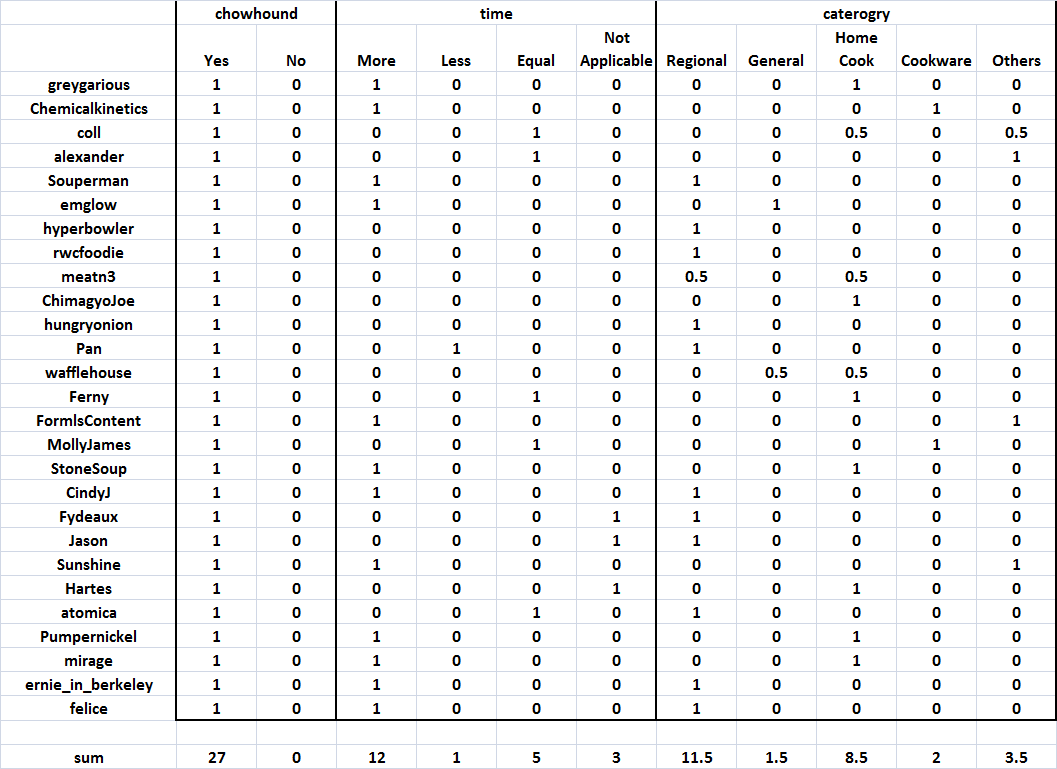 I too come here from CH. I was not banned, nor was I ever even suspended. There have been improvements to navigation and performance over the past few weeks, but I no longer post there. Many of the concerns voiced loudly and often during the Beta period were and continue to be ignored. And the absolute arrogance of Georges insisting we are wrong and his new site is better just really turned me off.

I still pop in to CH to follow along threads I was following that are still alive (very few) and, of course, the vitriol and disappearing posts in Site Talk. I don’t post there anymore though. What’s the point? Very little new content and many of my favorite hounds are no longer active. I’ve only been on this site for a few days (and they included a very busy weekend), but I hope to post here more often.

My regular boards were Philadelphia, NAF, General and Food Media & News. I also liked to visit the Community page just to browse for threads of interest outside my usual boards.

Continuing the discussion from Survey: CHOWHOUND or not CHOWHOUND?:

Hey, why don’t we do a little survey? First, it is for fun. Second, it will serve as a way to introduce ourselves to each others.
I think a good number of people are/were from CHOWHOUND. So why don’t we start with that?

I Was a member of chowhound. I wasnt the best contributer, but I tried. Then, one day my name no longer existed…I wrote to to TPTB and they said that I would have to make a new user name . My first thought was; I finally am able to talk to folks as a member of this group and now I have to start over. These folks dont like newbies.

I truly didnt feel like starting over again. So I quit.

Chem , Thanks for doing surveys . I always loved the ones you did on the other site . You are the survey master . I hope you do more over here .

3 - It’s a split between home cooking and the Ontario regional board. The two intertwine because I use the food finds on the regional board to supply ingredients for the many new recipes that get cooked at home.

Okay, the survey. Here’s to you, Chem baby, the guy with the categorical mind! '-)

1) Are/were you from CHOWHOUND?
Yes, or No? (feel free to elaborate)

Actually, I’m “from” California (birthplace) and currently “from” Plano, Texas (residence) but I will say I did put in a few years at Chowhound. Since 2007, to be exact. Not a “From The Beginning-er” by any means, but still, that’s a lot of time to invest in such an “entity.” My feeling about Chowhound is that when Jacquie (former “boss” or whatever her title) was in charge, things were much more “human” and “humane.” And at this juncture, I also suspect strongly that Jacquie’s departure may have had a lot to do with her not wanting to ride the Chowhound horse into the cruel waters the powers-that-be were pushing for. But I have no way of knowing whether this is accurate.

I feel a bit of compassion for Marssy. She’s the one who took over Jacquie’s job, and probably more than that. She came on all “Hey, kids, let’s be pals,” but when you are the “corporate raider” who has to do all of the slicing and dicing, there’s not going to be a long line of people who want to be your friend. I suspect that must have stung. Maybe a lot. With the passage of time, I have watched her slice more and apologize less. I don’t think she is in a very comfortable position. Or at least I wouldn’t be.

In the eight years I’ve been hanging out on Chowhound, there has been a long arc of what’s good and what’s bad. When I first joined, it was pretty much “talk about food, but don’t talk about how food meshes with the rest of your life.” I’m probably not stating it with 100% accuracy, but I was frequently (well, moderately frequently) asked to be more focused on the food-only side of things. Yet it has always been my conviction that food drives a culture, and where would the world of diplomacy be without State Dinners? And indeed, where would a family be without Sunday suppers? Or Thanksgiving dinners? Or Marshmallow Peeps? And I have to say that with time, as I and a few others (Sam Fujisaka was a great force in battling that dragon!) persisted, a whole lot of barriers were eventually let down and Chowhound was a fun place!

But nothing lasts forever. As Chowhound was sold and resold, the unraveling became more and more intense. My current feeling about the current owners is that if “CBS Cares”, it needs some serious lessons in HOW to care! It’s a mess!

2) At this moment, are you spending more time here than on CHOWHOUND?
Yes, No, Non-applicable (feel free to elaborate)

You bet your bippy, Baby!

3) What is the single most interesting board/topic to you?
a) Regional (e.g. San Francisco, New York…etc)
b) General
c) Home Cook
d) Cookware
e) Others

I’m more of a thread/subject person than a Board/Category person. Whatever is interesting! Time was when I really enjoyed the “master discussion list” that came up when I first logged onto Chowhound. As in BEFORE the natural laws of time and sequence were tossed aside and posts from 2003 were tossed into the pot with equal ranking with new threads from yesterday. What idiot came up with that bit of illogic? For me, that was the death blow that put the old Chowhound out of its misery. Sad. Really sad! But for me, the most sad thing about it all is that no one on the business side of Chowhound seems to have the ability to grasp this simple concept.

But hey, let’s celebrate this whole new day! Thanks to our very generous host and benefactor, we’ve got a clean slate!

THANK YOU, SAMPSON! From the bottom of my heart! '-)

My feeling about Chowhound is that when Jacquie

Wow. So many things have happened and I didn’t know. Jacquire is gone, huh? People have been talking about all kind of new names which I am not aware of.