NAfter the pleasant thali last month at Annachikadai, I had the opposite and unfortunate experience of eating thali a couple of miles down ECR at Abhiruchi.

A few of the components of the thali tasted of a common flavor- the nauseating taste of rancid oil. That taste was in the paratha, daal, eggplant, and I think one or two other items. I tried to think whether its my unfamiliarity with Andhra spicing that caused my reaction. But I can’t recall any other thali/ Andhra meal I’ve had with that kind of taste. And the plain paratha is supposed to have no spices besides flour and oil.

I don’t understand how a restaurant, with frequent turnover of raw ingredients, can have stale oil unless they are shopping from the bottom of the barrel. Should have taken the sparse dining room as a warning sign and just grab some chaat nextdoor.

Some of the items from the thali like sambar, yogurt, sweet needed to be requested. ‘Today’s special rice’, papad some other items never made an appearance. That may not be a bad thing. 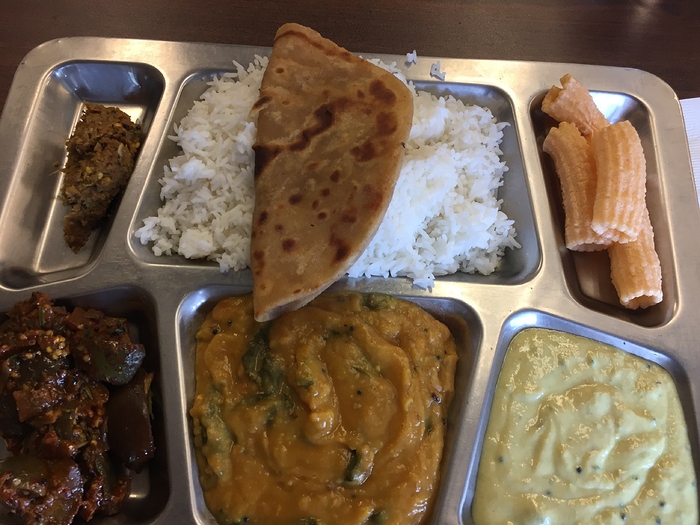 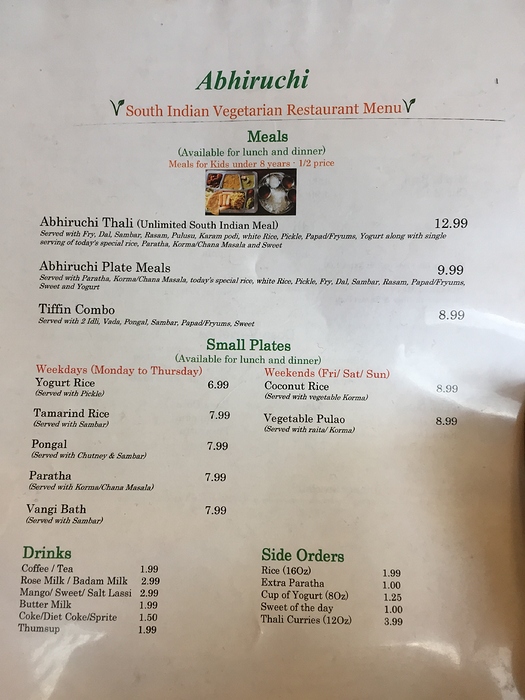 I don’t understand how a restaurant, with frequent turnover of raw ingredients, can have stale oil

Are they making their own food, or they buy expired frozen stuff made somewhere else.

I don’t know. What I can say that, I found the flavors of most Indian meals, even the average ones, not objectionable. I can’t say so about this meal.

I went ABHIRUCHI last Sat and thought the food was excellent. I did not have a THALI PLATE [sic], so I did not fully follow in the footsteps of Laoshi SCK.

I had a SPRING DOSA and my Mom had a MASALA DOSA and we both thought they were fantastic … better than the other South Bay Dosa Specialists.

The SAMBAR was also very good, although I am not sure if they offer “free refills” as is common.

The POTATO FILLING in the MASALA DOSA was very “buttery” and not rancid at all.

I dont have as good “taste recall” as some of you, but I’d say it was as good as the GANESH TEMPLE BASEMENT CANTEEN in QUEENS (although that place was way cheaper). I also dont recall well enough “highbrow Dosa” places like DOSA, but I certainly walked out of there more delighted with the experience than the few times I went to DOSA/Fillmore.

While we were there, 100% of the people there were SOUTH ASIANS. It was interesting we only were given SAMBAR SPOONS and expected to eat with our hands, as everyone else was (We are Indian; Dunno if non-Indians are given more SILVERWARE).

I was thinking about going back on Monday, but my Mom vetoed that … she claimed Whole Foods had some kind of cheap, green jackfruit prepared item, according to her friend in Danville … I was dubious … both about the ‘cheap’ part and the ‘jackfruit’ part … but we went to look for it at the Stevens Creek Whole Foods anyway. No luck, so we went to some random Thai place.

Its like you and I went to completely different places! Maybe next time when you are around we should go there and get some dosas. I don’t know if I am brave enough to repeat the thali yet.

BTW, did you ever make it to Dosa Paratha in Mountain View?