Stalk borer in my tomato plants?

Some pictures of my own. I believe I removed a bit of stem where the big hole is. 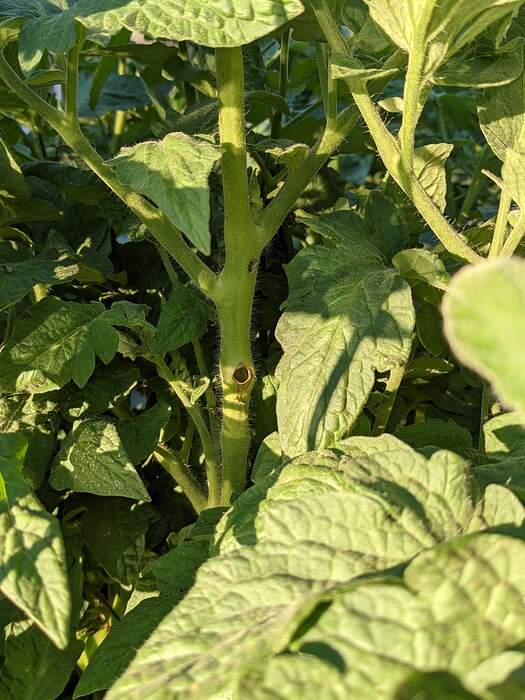 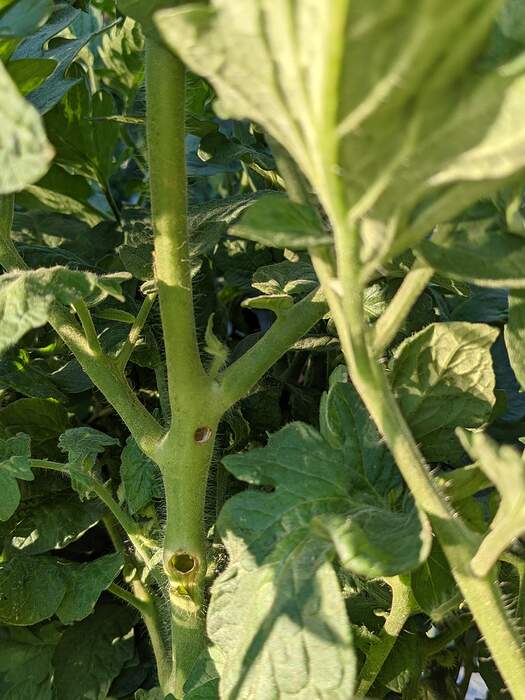 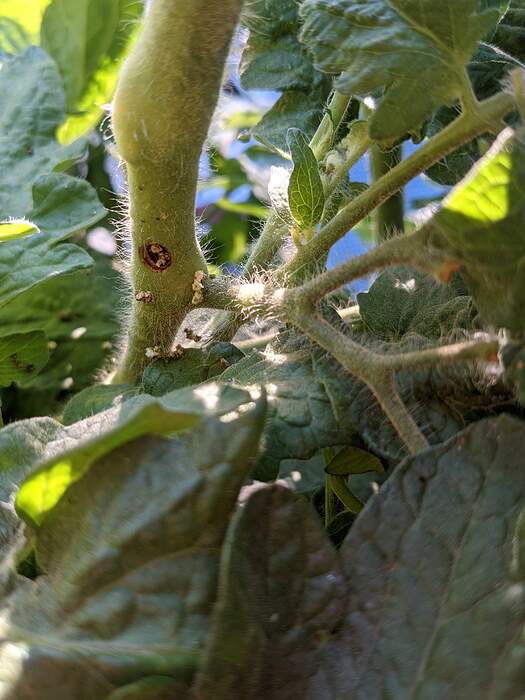 I found this on the web. 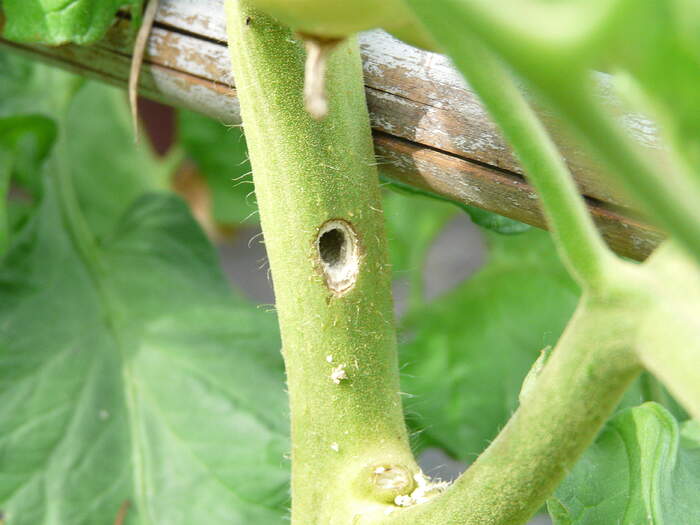 With the first sighting I cut the plant about an inch below the hole, and I recently dusted with "Jack’s deadbug " (spinosad), and hoping I didn’t take down too many beneficials.

Could this be a plain old horn worm or fruit worm?

There is not a lot of info about this on the internet, especially not on tomatoes. Anybody have any ideas? @bogman?

Oh yeah, those stem borers are here, too. There are two major groups: one are beetle grubs (often weevils/Curculio sp.) and the others are caterpillars. Once inside the stem, it’s hard to control them. I cut the stem off, split it and find, kill the offending larvae. There are also full-grown beetles with this nasty habit.

The key to control, unfortunately, is to keep the plants covered with an insecticide, especially coating the stems. Once inside the stem, the insects are mostly not in contact with the insecticide. If there are very few, you may want to use the prune and squish method. Often, these pests are not very specific, boring into sunflowers, peppers, Echinacea, Lilies, etc.

If you identify the pest as a lepidopterous caterpillar, it may be possible to keep the plants coated with Dipel, or other organic Bacillus thuringiensis var. Berliner (Bt). This bacteria only kills caterpillars. If you find a larvae, examine it to determine if it is a caterpillar (six front legs and rear, fleshy legs) or a beetle (three front legs only).

I just knew you’d share something helpful. Thanks so much!

I just wanted to say Bt has never controlled anything for me. I wanted to stay “natural”, so I bought brand after brand with no luck. I imagine it just tickles the bugs a little and they go on with their lives. Please report back if it works for you.

When I had a good plot I had little luck with Bt either. Full on chemical warfare did work, but that was before the impact on bees became apparent. Where we are now, between deer, rabbits, and chipmunks we’ve given up on a plot. Tomatoes are in containers on our deck about eight feet up. For whatever reason that has solved the insect problem. Altitude. Who knew?

Bt has never controlled anything for me

What things were you trying to control? For hornworms I usually pick some cats off, even when I use Bt. And I still use it!

Hoping my imagination is worse than the reality, which it usually is. I like to think I don’t use anything I remember from medical school ( I’m looking at you, Sevin, and especially malathion). Sort of defeats my purpose, which is not primarily about the eating.

Containers have been great for me as well, at least while I have access to
Irrigation.

Bt has worked exceptionally well on many types of caterpillars. However, it is important to get a fresh product or one that is reasonably shelf stable. Dipel Pro is an excellent choice. Bacteria don’t like sunlight. Spray Bt early in the morning or after the evening sun gets low. I’ve seen caterpillars die within four hours of application.

Keep Bt products cool, tightly closed in a refrigerator, and they’ll last longer. Dipel Pro can remain effective for years. But, it ONLY works on caterpillars, not grubs, or sawfly larvae. Some caterpillars are not affected, but most die after ingesting it.

Another Bt, Bacillus thuringiensis var. israelensis, is super for killing mosquitos. I use it to control the Asian Tiger Mosquito. I get a big jug of Aquabac, load a backpack sprayer and treat anything that holds water. It’s harmless to salamanders, frogs, tadpoles, fish, etc., when used according to label. It kills the mosquito larvae only, not adults. It’s the same bacteria found in “mosquito dunks” for birdbaths.

Shrinkrap, I’ve used Bt to control squash stem borer, tomato hornworm and an excess of Black Swallowtail caterpillars on Fennel and Dill. It also works on Cabbage “worms”, a butterfly larvae. Since many Brassicas, like Collards, are hard to wet, using the dust is often more effective. The dust can come in handy for unusual applications:

We used to have a 50 foot tall wild Black Cherry tree, Prunus serotina, which got defoliated annually by Tent Caterpillars. Starving, the caterpillars migrated into the nursery and were attacking Pitcher Plants, Sarracenia. There was no way to spray the treetop, so I got some Dipel Dust and made golfball-sized Dipel dust balls out of newspaper. Using a slingshot, the balls exploded when they hit a branch, releasing the dust all through the canopy. It wasn’t long before it was raining caterpillars, disgusting! Worked like a charm.

Well - stuff I can buy at the garden center or Home Depot applied in accordance with package directions and only after reading the data sheets.

Containers have been great for me as well, at least while I have access to
Irrigation.

Irrigation is a problem. My wife is out for the day - I should go water.

Dude. I don’t have room for all our food in the refrigerators.

It started with hornworms. But then pinworms came and it was over. Year after year we would try, but the dreaded pinworms would always show up. At least it prepared us for parenthood. A baby wasn’t such a big deal after that.

Anyone want to comment on spinosad dust? Or Permethrin dust? I’m trying dust this year because there seems to be less warnings about extreme temperatures.

I’ve been using Martin’s Viper Dust, which contains permethrin. So far, no burn in 90+ degree heat and high humidity. It’s listed for use on animals, so lower mammalian toxicity. Still, you want to wear a respirator and don’t apply it when there’s a lot of wind; it does float around.

Dusts tend to wash off easier, so that’s what I use on the raspberries, which are getting nailed by Japanese Beetles if not protected. If you’ve got flowering ornamentals attracting bees, you might want to cover them temporarily to keep the dust off them.

I used Permethrin dust a long time ago. It was pretty effective until it rained. sigh

Yep, it’s like doing a rain dance! Last time I dusted with it, it rained about 1/50th of an inch, just enough to wash the dust off.

It never rains in California.

I dusted almost two weeks ago, and every bit of it is still there! I was wondering if it’s still active, and presenting a risk to beneficial insects.

I cut it open but found nothing but the Jack’s Dead Bug dust and a few aphids. 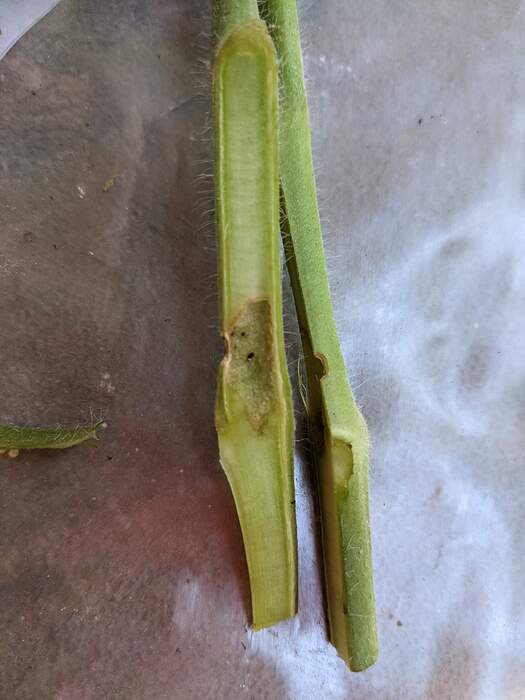 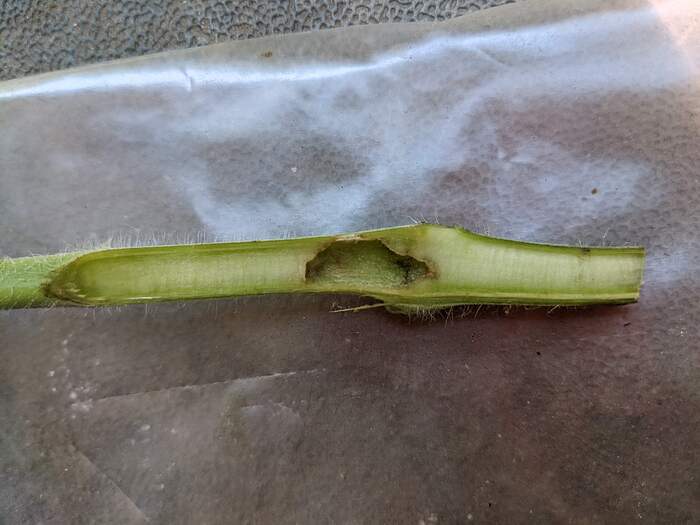 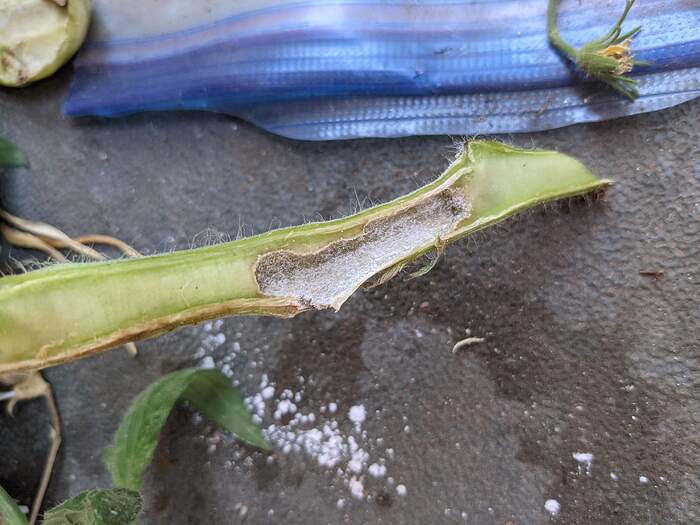 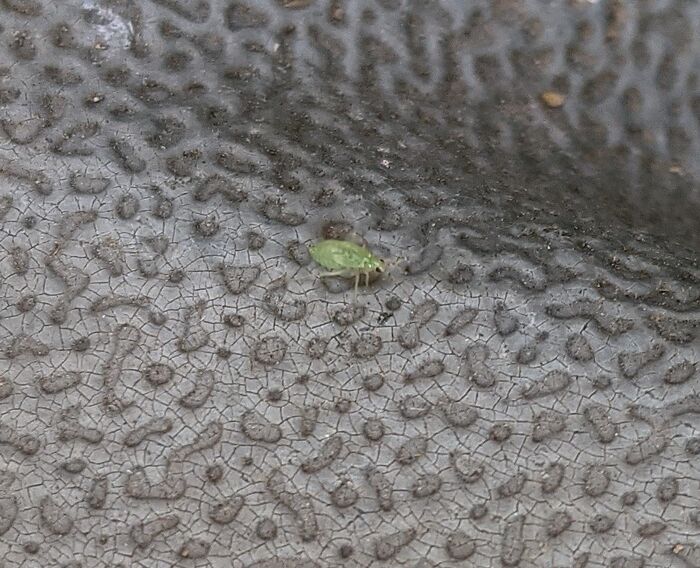 It’s amazing to me that the stems didn’t wilt; only a few small leaves.

I’m wondering if it could have been fruitworms. I found a few tomatoes on the same plant with these intruders still at the scene of the crime. 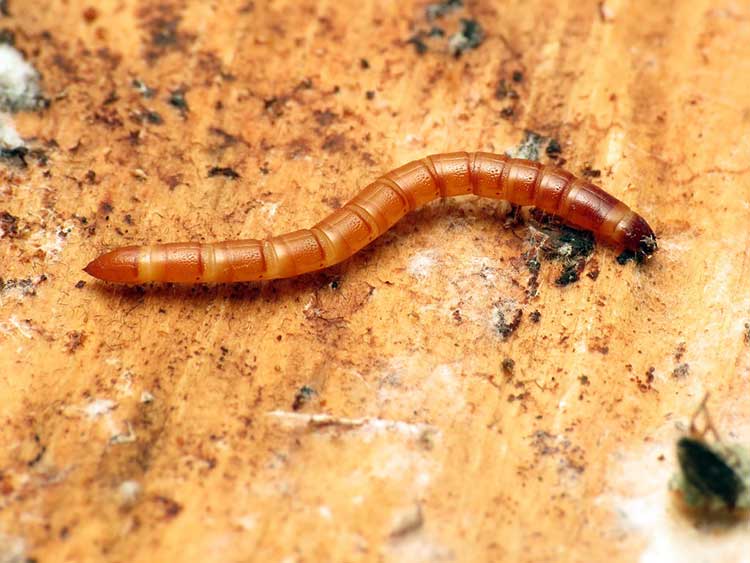 Do you have a wireworm infestation? Read our complete pest guide to find out how to identify these agricultural pests and wipe them out!