The 5 Best Chile Crisp Sauces You Can Buy Online

I agree wholeheartedly!
Believe I wrote about that a couple years ago
I also cannot be without a few bottles in my pantry!

Trader Joe’s is now carrying Chili Crisp. I bought some but haven’t tried it yet, as I still have some of the Laoganma jar left.

An interesting tutorial on home made Chili Crisp.

What is the re-used salt okay for?

ETA; Okay, I’ve watched most of it, and I think I’m just buying some.

Thanks for the great vid tip! Chicken Claw pepper seeds appear unavailable in the US. I’ve got a bunch of “connections” and will ask them about finding it. It looks a lot like Himo Togarashi, a Japanese heirloom. However, it’s bumpier and longer. Korean, Kim Chee type peppers might also work, Lady Choi Korean pepper is a good, open-pollinated variety.

) until the fish odor cooks off. Great to have a camp stove for that!

I have a cheese press and can make super-firm tofu by increasing the weights on the press. That can also go into Kim Chee soup. Just made about a gallon of Kim Chee. Time for kimchijeon, too.

I’m sure the salt can be reused to toast more peppers, as long as there are no scorched flavors from accidental overcooking. A small amount of Capsaicin might leach into it, but salt isn’t loaded into many foods. You could use it for kim chee or other lactic ferments.

I do not pay much attention to sauces in our fridge, not an aficionado by any stretch. My partner on the other hand, never runs out of her jars of various chili (Taiwanese, mostly). This jar is almost all gone, finally noticed it today.

Linsanity Sauce! My sauce lover gives two thumbs up for this product. 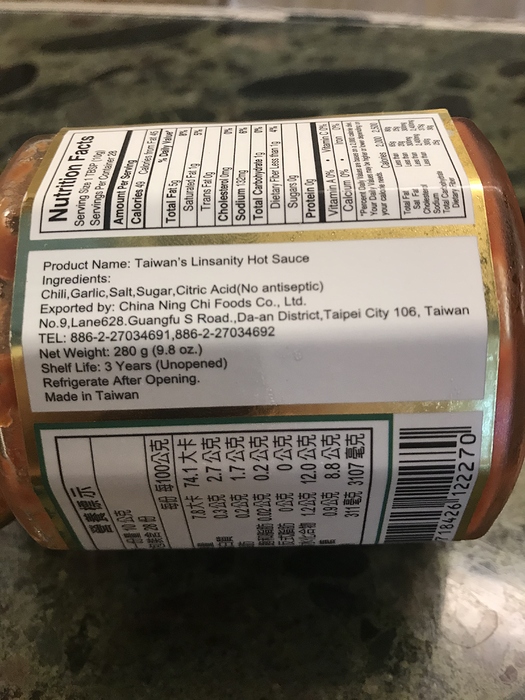 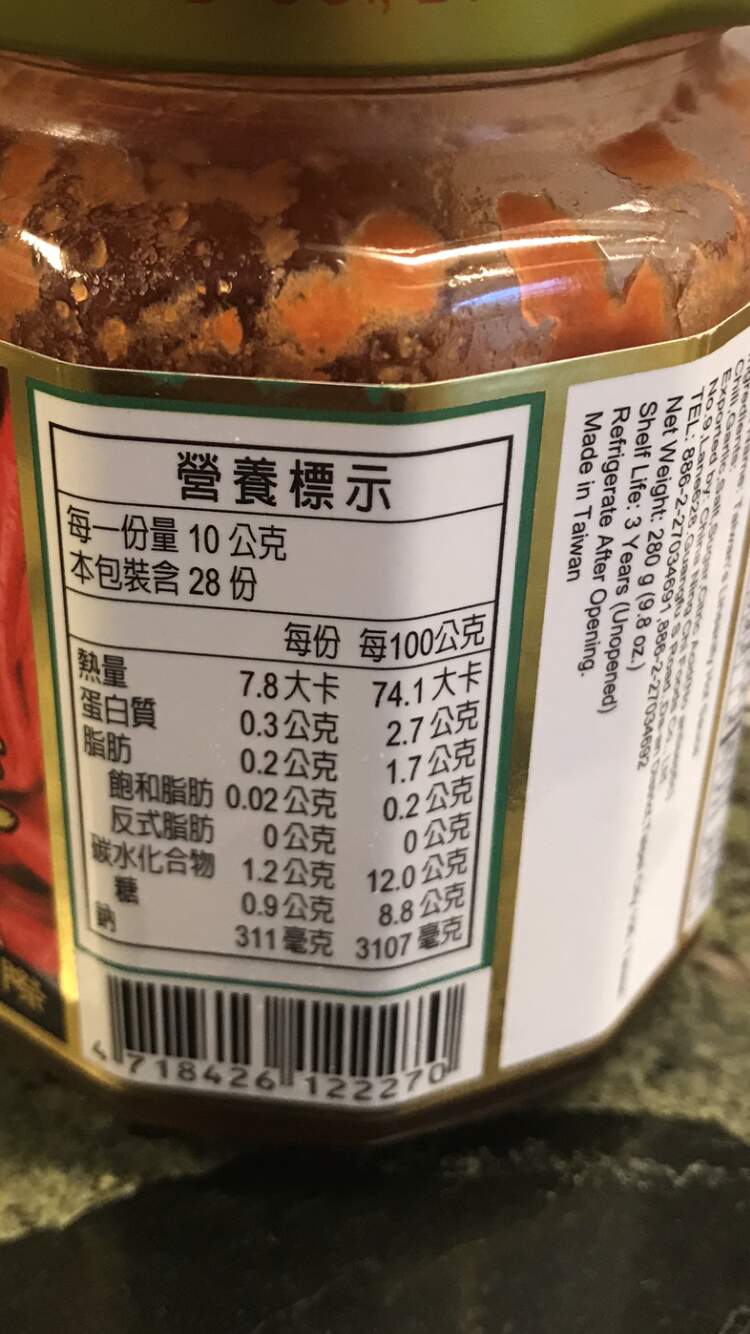 Better picture of a clean full jar gleaned from the web. 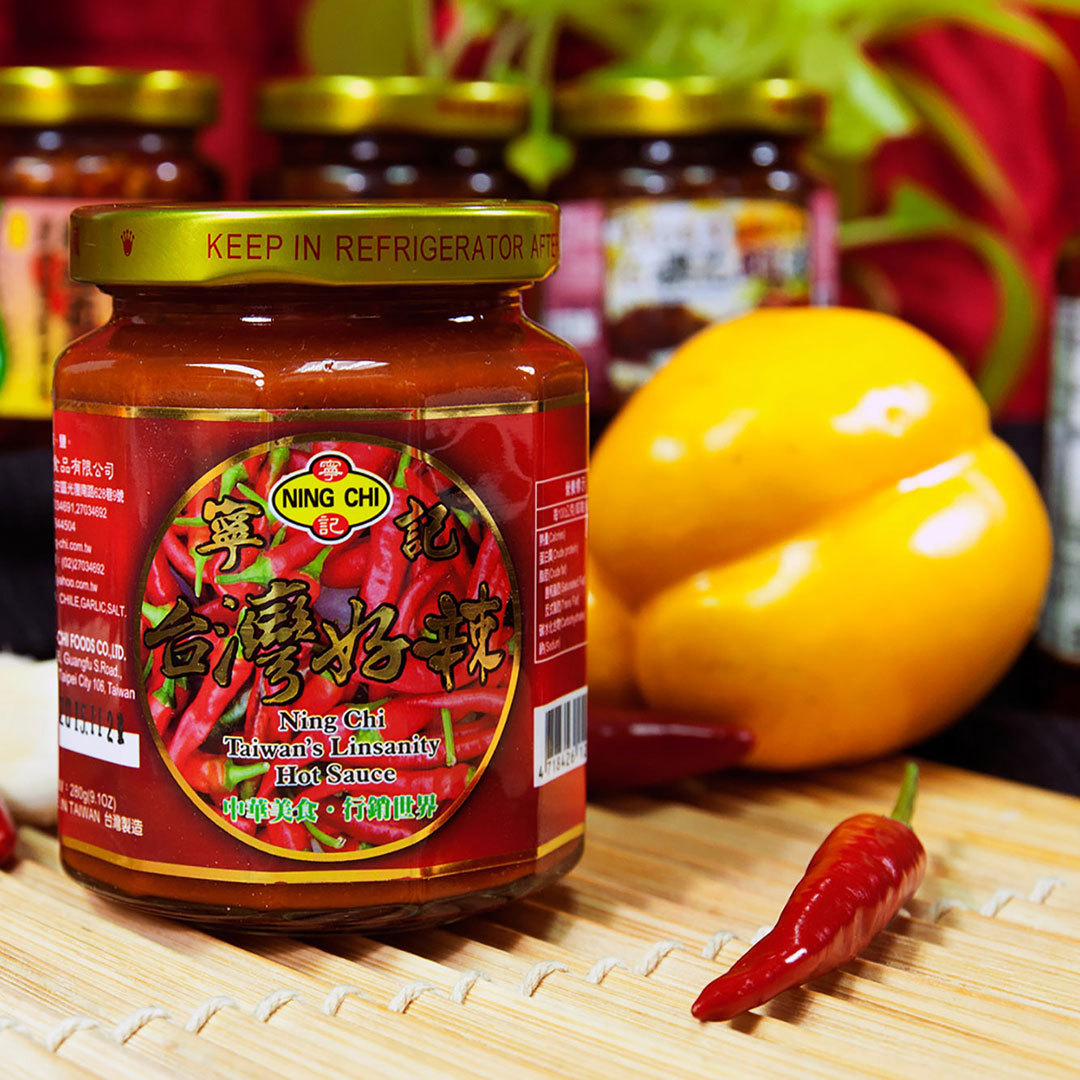 Serious Eats recently updated their recipe - I made some today, loosely following their ingredients/amounts/instructions. I left out most of the extraneous spices, mushroom powder, msg and sugar (part of the reason I wanted to make it myself is to avoid sugar). It’s fantastic - better than any I have found online, and at a fraction of the cost. Here’s what I did, more or less:

Note: All peppers were weighed before stemming/seeding

2.5 cups peanut oil
150g shallots, sliced on #2 on my mandolin
80g garlic, sliced on #2 on my mandolin
40g ginger, cut into matchsticks and then diced
25g sichuan peppercorns, toasted and ground
2 g black pepper, ground
40g pasillas, broken up in FP and then coarsely ground in spice grinder (this worked better than trying to grind directly from whole)
40g guajillos, same treatment as pasillas
25-30g hotter dried chilis (I had a mix of Dundicuts, Arbols and Kashmiris)
65g peanuts, coarsely ground in FP
30g salt (I used kosher and ground it finely)

The recipe is written a bit backwards, IMO - frying the shallots and garlic requires a bit of patience, but you don’t have to stand over them the whole time, so I sliced those first, started the frying process, then turned my attention to deseeding the chiles and getting the rest of the ingredients together while keeping an eye on the alliums.

I agree with @shrinkrap’s assessment that there is WAY more crisp than oil in this version - they state that to be the case in the recipe, but even so I was surprised given the large proportion of oil
to crisp I have come to expect from commercial versions. I would bump the oil to 3 cups or maybe even 3.5 cups next time (I might pour some extra oil in to the finished jar now, actually). Also, it is a bit too salty for my liking when eaten off a spoon - this might be my fault for grinding my salt to powder, but I wanted a finer texture. I would definitely cut the salt back by a third or half next time, although it will be easy enough to adjust as I use it to dress foods.

My version is hot enough for my purposes - DH doesn’t like as much spice as I do and I think this will be tolerable for him while pleasantly tingly for me. Definitely looking forward to experimenting with other chile blends, though. I was planning to use Facing-Heaven chiles but when I went to grab some, I discovered my bag had molded. Boo hoo!

ETA: Next time I will probably add sesame seeds, as well as maybe a touch of sesame oil after cooling. And double the ginger!

Many thanks! Are the peanuts dry roasted, “cocktail” or some other form?

Giving the weights is very much appreciated!

Are the peanuts dry roasted, “cocktail” or some other form?

I used Planters cocktail peanuts, but I think any roasted/cooked peanut would work as long as it doesn’t have a flavored coating.

Tried the chili crisp today on some scrambled eggs. Still totally crispy after a night in the fridge, and the flavors have melded nicely. Also still too salty, though - I may make another batch without salt and mix them to dilute. Here are some pics showing the ratio of crisp to oil: 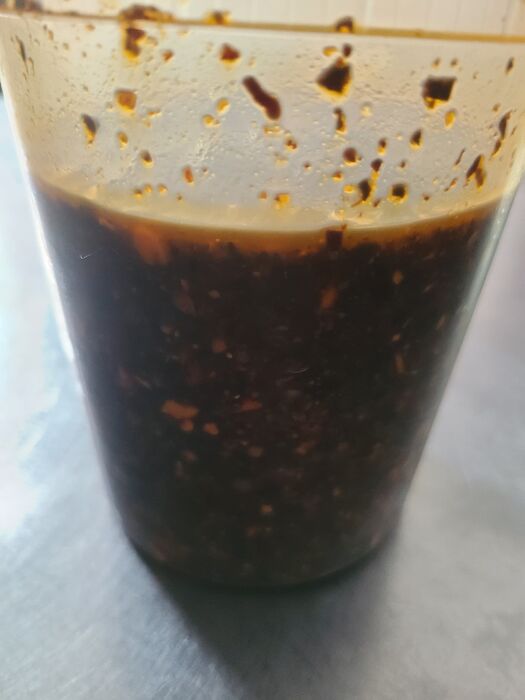 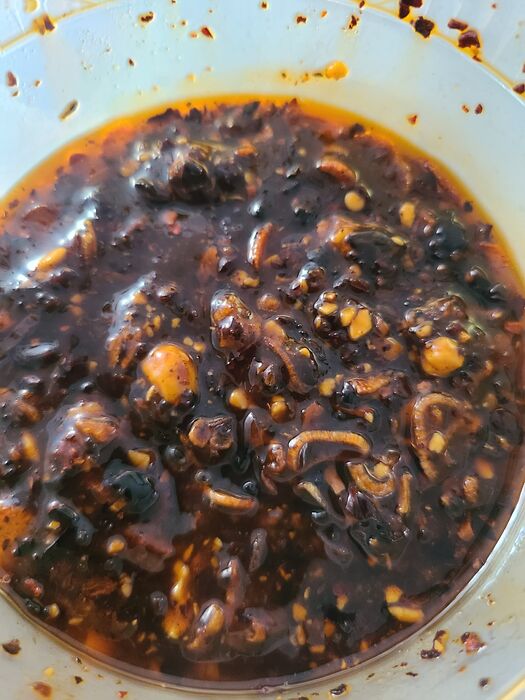 Unlike commercial brands, which I find tend to have an inch or two of crisp in the bottom of a jar topped by an equal or greater amount of oil after settling, the crisp in this recipe reaches the top of the container even after settling overnight.

Thank you for sharing your recipe upthread.
I wish this board had a ‘save post’ or ‘save recipe’ function, to build a collection from recipes others have shared.

See the bookmark? You can bookmark and label, then search your bookmarks later 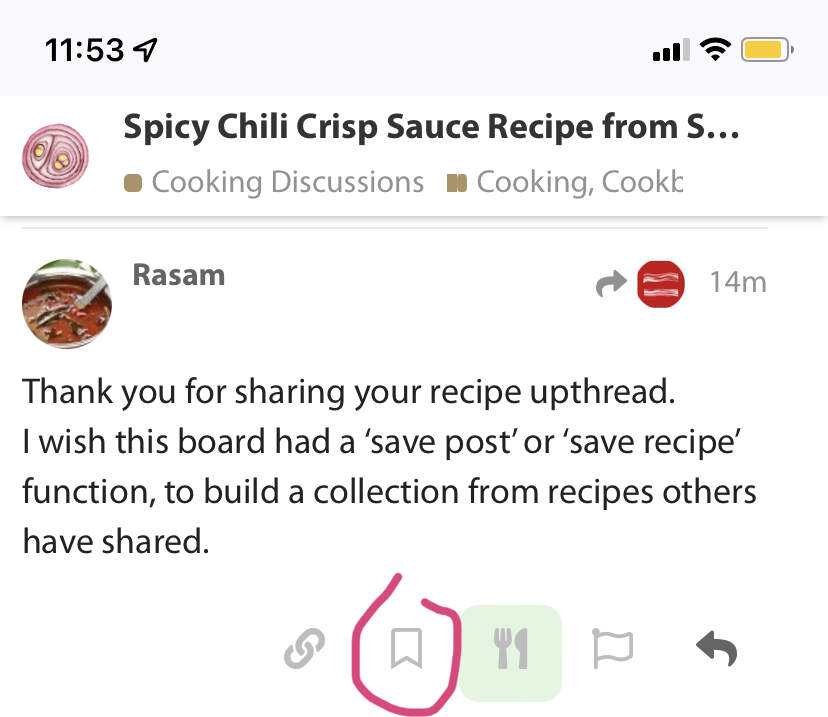 This was my conclusion too.

I got the big jar of LGM last time, and it’s going to take me a while to go through it.

Also I use a few versions for different things (LGM crisp is default, TJ’s non-chinese one with garlic and onions for some things, a couple of different LGMs for other things) so there isn’t a one-type-fits-all for me.

Now if there was a way to recreate TJ’s fermented Calabrian chile paste, I might dabble with that…

As much as I like LGM (have eaten it for years and still do), I taste more MSG in it than anything else. The best thing about making your own is you are in control of the ingredients, you know what goes into the sauce, or use as much chillies or garlic ect as you please!

One of my versions, this is more Asian-inspired (“heaven-facing” chillies and peppercorns brought back from Chengdu, China): 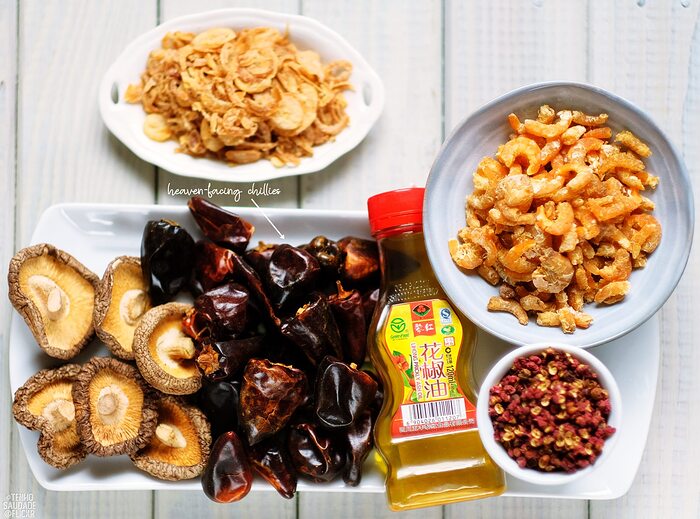 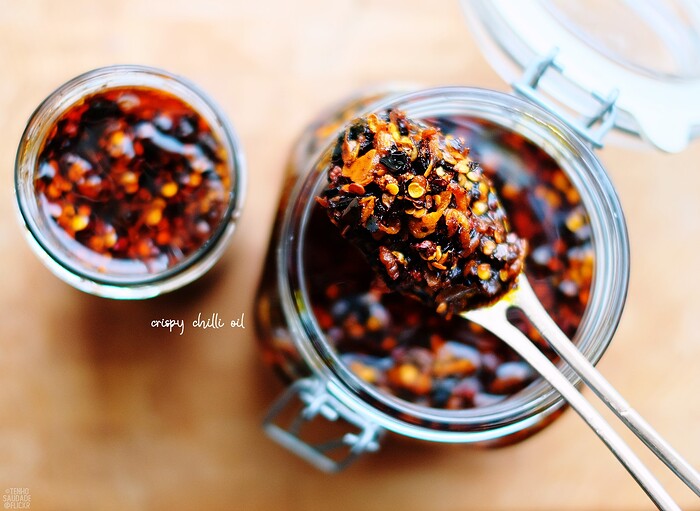 The best thing about making your own is you are in control of the ingredients, you know what goes into the sauce, or use as much as your favourite chillies or garlic ect as you please!

Exactly. I like the commercial versions well enough but I like having control over the ingredients, especially the oil. Not a big fan of vegetable oil, which most commercial brands use - would much rather use peanut. Extra garlic, ginger, different chiles, etc. are just a bonus!

For things like this I use the mildest olive oil. You can barely taste the olive flavour. And with extra garlic or hotter chillies it’s completely gone, pretty much.

Now if there was a way to recreate TJ’s fermented Calabrian chile paste,

I’m planning on experimenting with that! It took awhile to find the right Calabrian pepper seeds, which have not been planted yet. The ingredients list on the TJ’s paste has plenty of clues. Once made, it may need a water bath canning and a pH check.

Made another, larger and less salty batch tonight - getting ever closer to perfection! This batch is a little milder than I wanted because my new Facing Heaven chiles are less spicy than expected, but still great. Planning to up the ratio of hot chiles and add a little MSG next time.

Basically this was double the oil and 1.25-1.5 times the rest of the ingredients other than the salt. It’s still salty enough! It’s also still chock full of crispy, although a little looser than my last batch. Yield was about 8 cups - I packed up 4 8 oz jars for gifts and the rest is all mine!

Yes indeed; but they can be loaded into a dish, after a brief dry wok toasting, without fear! The Arbol can amp the heat, but I bet you like the pasilla/guajillo combo for flavor, so perhaps something more zippy than Arbol?

Many thanks for your posts! The market here has spotty availability of LGM, often none; and, the price has gone way up.

Did you dry the garlic outdoors, in a dehydrator, or did you use another method?