Speaking of rice, which ones do you eat?

From a plate, I don’t know why anyone would use chopsticks to eat rice. It’s just so much easier to do that with a fork.

A lot of restaurants would serve the rice in a big bowl without giving out small bowls to dole it into, so it ended up on your plate. Fortunately, they seem to have gotten away from the Jasmine rice.

Lundberg has both brown and white, and they grow varieties like jasmine and basmati, without the aroma of their Thai or Indian counterpart.

I used to like Jasmine rice, but found that some fo them had coatings,( recent article I wrote)
So, I changed to California Red Kokuho rice.
Left overs are great when packaged in stretch tight and microwaved.
They taste as though they just came out of the rice cooker.
I tried the Yellow Kokuho which is a tad cheaper but quality is different in my humble opinion.
I have never had problem with them. I stored almost half of it in my salvaged SS ethylene gas sterilizer ( since nobody use that anymore but use autoclave instead since a long time ago. It is godsend as it is heavy duty SS, with locks. The rest I store in my salvaged huge navy aluminum pot that I bought for $50.00 in 1974 from Amish flea market. It was sitting in one corner of the market, nobody seemed to notice it but me. It was so huge and heavy my husband had to carry it on top of his shoulder, We used to use that for cooking Smithfield Ham but I do not cook ham that way anymore, and so, it is used for storing my rice that cannot go into my ethylene gas sterilizer, the various 1 lb rice flour, sweet rice flour, tapioca potato starch, and other knick knacks that cannot be accommodated in the kitchen’s container. It is very heavy and airtight also.
You are with, that is the proportion of pound cake but with gluten free, I had to use a different recipe to make it taster and not as heavy.
By the way, I understand what you say about eating rice with chopstick. I am one Chinese who ever learned to use chopstick.My grandmother used to comment that NO CHINESE WOULD EVER MARRY ME IF I DO NOT LEARN! SHE WAS RIGHT! Any way, the reason from my understanding watching my parents and grandmother eats is rice in the small rice bowl, then pick up the main course or whatever with your chopstick, place the bowl close to THEIR mouth and with the chopstick, they pick up the mix rice and whatever, place it inter mouth and if in a rush, just shove the food with chopstick directly into his/her mouth. VERY EFFICIENT!
My grandparents had a restaurant during the occupation for American soldiers and we had tons of spoon and fork and plates left over. I learned how to eat the American way, never learned to eat the way my parents did to their dismay!
Here is a photo of the ethylene gas sterilizer . It is very heavy SS, 10 inch by 8 inch. If you ever see one on sale, you should grab it quickly. 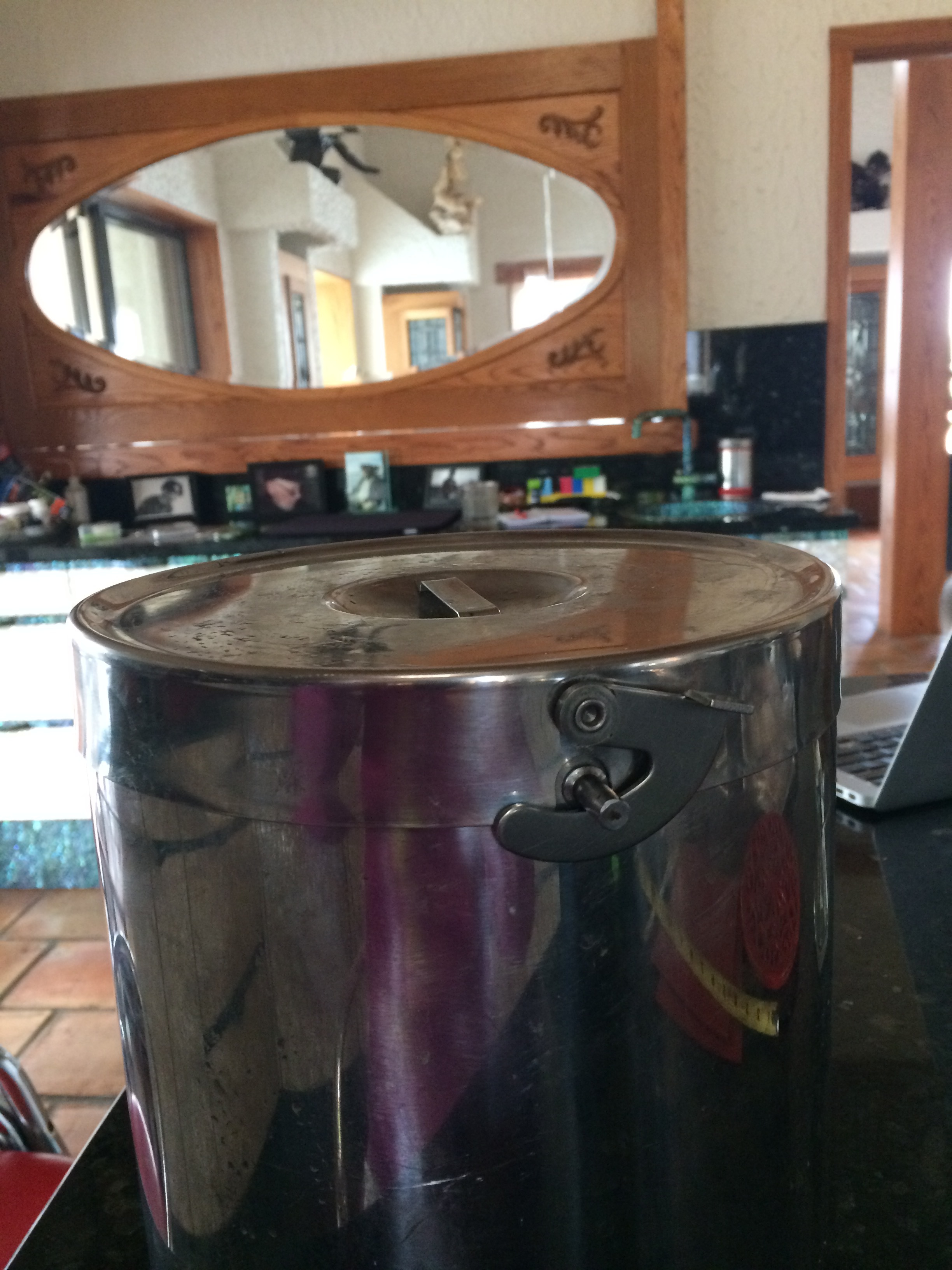 Beautiful pot, I would say.

Real Wild Rice or that California hybrid stuff?
I have to have my niece send the real thing from Minnesota.

thanks . I tried to buy all operating room SS when I could. They are really heavy duty. I bought mayo stand tray which I used for roasting, all kinds fo alcohol container for sugar etc.

I only buy other types of rice when I know i plan to make something with it, i,e. Arborio for risotto, etc.

Our “all purpose” rice is aged jasmine.

Interesting. I don’t think I had any aged rice. How is it different from the fresh jasmine?

Interesting. I don’t think I had any aged rice. How is it different from the fresh jasmine?

I forgot, I also have bomba rice and arborio and carnaroli rice.

It’s odd to think about, but I never considered having that much rice in the house as “a lot of rice”. To me they are distinct ingredients, similar to having different types of pastas and noodles in the cupboard. Practical and useful.

It’s odd to think about, but I never considered having that much rice in the house as “a lot of rice”.

It depends the “health” of the rice. The carnaroli that I have now, I bought box them like a bundle of 10kg, with 10 individual bags of brick-like sous vide pack, no air, this can be kept for a long time. But the jasmine rice, I bought 1 big bag of 10 or 20kg, after a few months, they can develop some bugs. If your panty has been infested with moth before, like mine, need to be very careful and try to keep them in air tight container.

I’m in Houston and typically eat any one of several locally grown brands of long grain or extra long grain whites. As our friend Jaymes can attest, the area just west of me was once a vast plain of rice fields.

My current bag is from Douget’s. It has a Beaumont, Texas address and a “Go Texan” logo, but now that I look at it, nowhere does it explicitly say “Grown in Texas”. I just looked up the “Go Texan” deal and it’s a trade organization. You can become a member (for a fee, of course), if your agricultural product is “grown or processed” in Texas. So…meaningless.

Anyway, I had never read the “ingredients” before but after reading this thread I had to go look. To be honest, it never occurred to me it was anything besides “Rice”. The front label says “Extra Fancy Enriched Rice”.

The ingredient list says “Long Grain Rice, Thiamine (Thiamine Mononitrate), Niacin, Iron (Ferric Orthophosphate), Folic Acid (Folate)”. The cooking instructions always say something to the effect of “in order to retain the vitamins and minerals, you should not wash or rinse your rice, before or after cooking.” I always assumed it was marketing jargon to make you think rice is good for you. Haha.

I don’t know I bought some 10-15 years ago at a local Whole Food. I am looking at photos of wild rice vs hybrid wild rice and I cannot tell.

I should add that Minnesotan wild rice is from the grass family and is not rice, even though sometimes it’s used similarly. That wild stuff is so labor intensive harvesting and expensive!

Right right. Yes, it is grass. I will look into if mine was real wild rice.

The California stuff isn’t bad it just isn’t wild rice. I’m not sure what it derives from or where, originally.

with 10 individual bags of brick-like sous vide pack, no air, this can be kept for a long tisme. But the jasmine rice, I bought 1 big bag of 10 or 20kg, after a few months, they can develop some bugs. If your panty has been infested with moth before, like mine, need to be very careful and try to keep them in air tight container.

This has never happened to me. Maybe the climate in which I live? Or the importers here. I buy from local ethnic markets and have never had issues with bugs, even after a year of storage.

It happened to me with Asian rice, it seems. Maybe like @ccj said, the rice was treated, but after a certain time, the treatment is no longer effective, and insects come or they are there, but sleeping with the treatment.

I don’t know for sure, if I am wrong, correct me.

I did say the rice when I was buying them early on were treated but with talc. That may have changed a lot since Ralph Nader lobbied against it . After a while, I started to see starches and cereal coatings but some still had talc. So, to be sure we do not get cereal such as oat, malt rye and barley, I decided to not buy Asian Rice bt stick to rice made in California
However, that coating may not have anything to do with insects.
If interested, here is an article bout rice being coated with calcium carbonate to make it look whiter, It also states that if there are insects, just place some cinnamon sticks to them.
https://www.quora.com/How-do-you-distinguish-fake-plastic-rice-imported-from-China-from-the-real-rice-that-doesnt-have-plastic-in-it
Same with rice sticks
I was told by some chinese acquaintances and friends they do not buy rice sticks from china bec they are aware of treatment with bleach to make them white. They say they buy the ones from Taiwan. I do see rice sticks made in Taiwan that states they do not contain bleach.