kimfair’s recent review of Buttermilk & Bourbon and my impending read of the great John T. Edge’s The Potlikker Papers has me wondering just what are the best representations of Southern food to sample up here north of the Mason/Dixon and in the Boston area proper. Anyone have any faves? I’ve always wanted to try Southern Kin since Assembly Sq is close to the storage place where half my life is stashed. The Porch in Wakefield seems kind of promising–I love their very limited menu, and people on the North Shore Eats Facebook page appear to be very gung ho, though recs from there seem sometimes to need to be tempered. Sweet Cheeks sounds OK if a bit pricey and I’ve never been to Tupelo in Inman but I have been a fan of Petsi since she opened her place just down the hill from where I lived in Somerville. (Though to be honest, the biscuits and pies there were way better when it was just her churning them out!).

In any event, if you all have any suggestions for Southern food places or dishes that are worth checking out here in the realm of Boston, I’d love to know. Thanks.

Trina’s chicken and waffles is my favorite. I’ve enjoyed Tupelo- can’t remember what we had there as it was years ago. People are raving about pies out of the Rosebud, if you consider pie a southern thing.

Southern Kin rubbed me the wrong way. Maybe it’s the surroundings and the bazillion security cameras aimed at every table? Cocktails were overly sweet. The specific dishes were okay except some shrimp in a jar thing with excessive mayonnaise.

We went to brunch at Southern Kin awhile ago and haven’t bothered going back. The food was decent, but it sort of felt forced and corporate. I’d probably go back if we wanted to hit up one of the outlets, but it’s not a destination.

it sort of felt forced and corporate

Isn’t it exactly that? I thought it was owned by a large food “group” which is another word for corporation.

Most of these examples are of low country Southern food. My husband doesn’t recognize any of the foods of his youth on these menus once you get past the biscuits.

Isn’t it exactly that? I thought it was owned by a large food “group” which is another word for corporation.

fwiw, these anti-suggestions are just as helpful as suggestions. I thought I wanted to check this place out. But it is now way lower in my ratings. Seems much less enticing now. Appreciated.

@passing_thru. My husband simply hasn’t found the food of his youth here in Boston. I have learned how to make some of them for him. So, now I am categorizing what makes him happy at home, and there are some versions around town, but he doesn’t care for them.

The Highland Kitchen does offer a fried chicken on Mondays with collard greens. He found the breading on the chicken to be too heavy and the collards were salty and had more pork than he wants. Around his home, the chicken is only floured lightly, fried as pieces. His preferred sides are vinegar based cole slaw, biscuits, and perhaps some potato salad, light on the mayo.

He loves a pan fried pork chop with smothered onions, as he calls it. His Mom’s version was horrid. She baked the pork chops for [wait for it] 8 hours. The poor pig died in vain. He makes this dish with either a very thin chop or a really thick one. In between doesn’t work. Dry brine, flour and pan fry with just a slick of oil. Finish with some butter and almost-carmelized onions. His favorite sides are rice and steamed green beans, obviously a light version of the one he grew up with since those beans were cooked for a long time with pork back.

Pork ribs. Ah yes, pork ribs. His area of Georgia had a regional sauce that is like no other. Even 20 minutes away by car, the mop sauce is mustard based but not as much as a South Carolina version. We have added some carribean flavor to our mop sauce over the years, moving away from quite so much sugar.

One of his favorite food memories is whole prime rib grilled with fresh herbs with a side of biscuits, roasted or grilled potatoes and fresh tomatoes. The fresh tomatoes recur throughout his menu memories.

Pulled pork is obviously a common lunch meat with a mediocre roll, poorly cooked baked beans and greens. At this stage in his life, he would rather have a well made Mexican pork meal.

And finally peaches and pecans. They grew on the farm where his childhood home was built. This was no longer a working farm, so he was free to roam and eat anything he could find.

I don’t think that this restaurant could exist in Boston. Just too regional. And our tomatoes are just not good enough year round.

haha, this post is great. thank you for the input. I always say how I wouldn’t go looking for clam chowder or clam cakes in NC or SC, and this just reinforces that idea. There’s still a place or two around that I’ll give a shot (I do hold out some hope that at least half decent barbecue isn’t impossible in these parts, and being a Yankee heathen a place like Lester’s in Burlington is at least acceptable to me) but I get the drift. The silence on this thread is, well, deafening. Thank you for the response, smtucker (et al), I should probably concentrate my limited outside food budget on more promising local arenas of food.

@passing_thru. We did live in Texas for three years.

If you consider Texas to be the South (they sure don’t) then these two spots are pretty good.

The brisket at Smoke Shop in Kendall is really good. Not so good? The sauces and sides. We have been known to buy some brisket by the pound [well fraction of a pound] to eat with sides I make at home.

Sweet cheeks also does a good brisket and her biscuits are worth the calories. Again, the sides are a bit too chefy, but I remember enjoying her cole slaw.

For “southern style”, the Coast Cafe in Cambridge does decent fried chicken (I always get thighs). That’s something I can make at home so I don’t go there often. I’ve also had some good eats at Tupelo; I especially like the fried oysters.

I think both places are good for the area but as folks have pointed out, this isn’t the south.

Petsi Pies. Renee Macleod, the founder/owner, is a genuine Southern baker and a charming, gracious lady.

Just recently, the Phantom Gourmet program did a feature on Southern food in the Boston area. You might be able to find it online.
There seems to be a pay to play aspect to PG recommendations, but they are not entirely without merit; the main value of the show is that it includes pictures of the venues and dishes.

I lived right up the hill from Petsi’s when it opened in Somerville. I have always thought it was good (though I only get things from there infrequently of late) but I tell you, when it was just Petsi in there all the time as a solo act it was fantastic. But I have to try Tupelo, I think her quality control at least is respectable.

Re: T.B.: thanks, I forgot about Coast Cafe! liked that when I lived in C. Sq. For a long running spot, that one is really under the radar.

BT’s Smokehouse in Sturbridge is still the best BBQ I’ve had in New England. I can’t even imagine baking any meat for 8 hours. How did it not just disappear into a little hard pork chunk?

Is Frogmore in JP still open?

I ate there a few times and it was ok…

I agree. I’m from the south and some of the servers play up what they think are southern accents and preening and excessive, fake friendliness to the point where I felt like we were at a dinner theater. I’m guessing they are coached to do this, but it is very unappealing. Some of the food is okay (I like the fried okra and the biscuits), but it is overpriced, overcrowded, and the service is either great or appallingly bad/disorganized. We went several times in the first few months and will not go back.

Currently looking forward to trying B3/Back Bay Beats, after hearing good things about it. I’m from the South myself, but had long given up on getting similar food up here.

went here the other night before seeing Pharaoh Sanders at Northeastern. It was reasonably good, but not outstanding. Shrimp and peas yielded some well cooked black eyed peas topped with succulent head on shrimp, with some red pepper rings for sharpness. A good entree. The s.o. got a decent arugula salad accompanied by a side that was some really delicious flatbread and a smear on orange squash puree of some kind that I thought was flavorful, and a nice accompaniment.

Service was cheerful, and it’s a nice room.The one thing I really didn’t like was my cocktail. Got the Sixteen Tons, which was whiskey, apple + cinnamon syrup and bitters. This thing was way too sweet for me and totally out of balance with not nearly enough edge to it. When the server said the drinks tasted like pie, I should have known better and just ordered a martini!

Not a bad spot for the area, though.

Thanks for the report! Since I live nearby, it definitely sounds like a good option to have.

2 posts were split to a new topic: Southern Ham in Boston area?

resurrecting this thread since I finally went to Sweet Cheeks for lunch last weekend and I don’t really want to start a thread just for that. Brisket was good enough, 3 juicy slices with a nice crispy outside. Loved the chunky, low mayo cole slaw. Ordered the collards too, and the server had mentioned that they came with a little pork. I think he meant a LOT of pork, because the cup I got was like 40% pork with a little unwelcome bit of bony pork knuckle thrown in. The texture and taste of the vegetables were properly savory, but I sure could have used a little less pork. (This is not something I often say). Side pickles and onions were average.

The space is nice, service was competent, the portions were ok, it’s a little more than you want to pay, and it’s all…fine. I liked my lunch but I doubt I’ll rush to go here again.

I did really love the biscuit, though. (Honey butter I could take or leave). If I’m ever over here when they’re serving breakfast sandwiches on these, count me in. 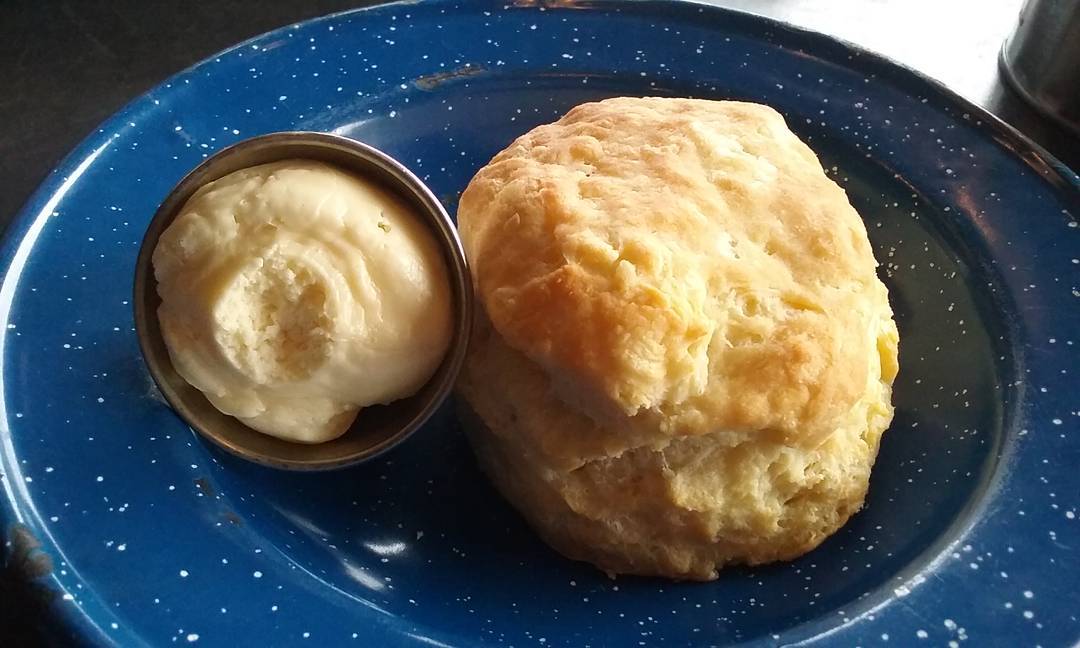 breakfast sandwiches on these

Oh you are killing me, the likelihood I will ever be over there on a M-F morning is near zero.