Many people know that pro and haute cuisine chefs prefer veal stock. But fewer understand a big reason why: veal bones contain high levels of collagen, which contributes to a stock’s or soup’s body. Another reason is that beef stock made with enough actual collagen can be too dark in color.

For most of us mere mortals in USA, veal bones are either not available or are prohibitively expensive. Hence thin, dark beef stocks, and/or soups thickened with other ingredients.

But what about adding plain, unflavored gelatin for “body”? I tried this a few nights ago with a beef barley soup, and the results were positive. It was still dark, but it was slightly thicker when hot; the cooled leftovers were noticeably gelled. This mimicked the results of other stocks I’ve made when I had large numbers of bones and joints on hand to use. This let me thinking: for “quick” soups and stocks, why not include gelatin as the rule, not the exception?

So who here uses this technique? And how much gelatin do you add, and when?

Ill find knuckles or something if I want body.

Never felt the need to add anything. A gentle reduction works for me.

I do, since using that technique when described in a Serious Eats story. ATK describes it as well. Imost frequently it for a pan sauce, and I believe its 1.5 teaspoon. 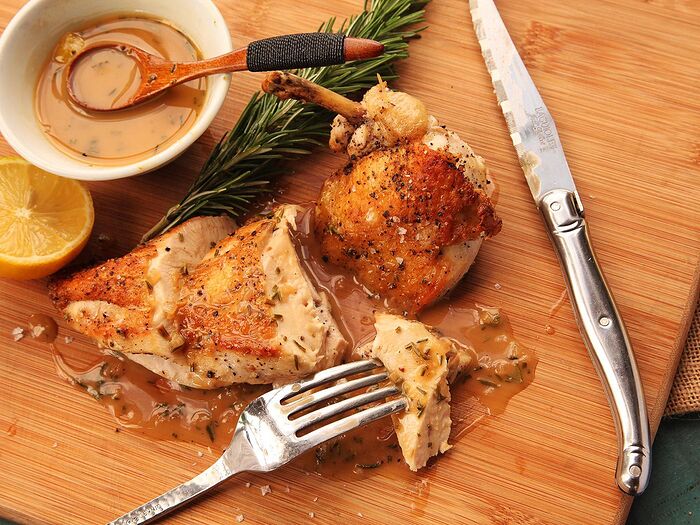 Pan-roasted chicken with pan sauce—like this one flavored with fresh rosemary and lemon—is the ultimate weeknight staple. It's inexpensive, delicious, and takes less than half an hour from start to finish.

This isn’t the original article, but it covers a few. 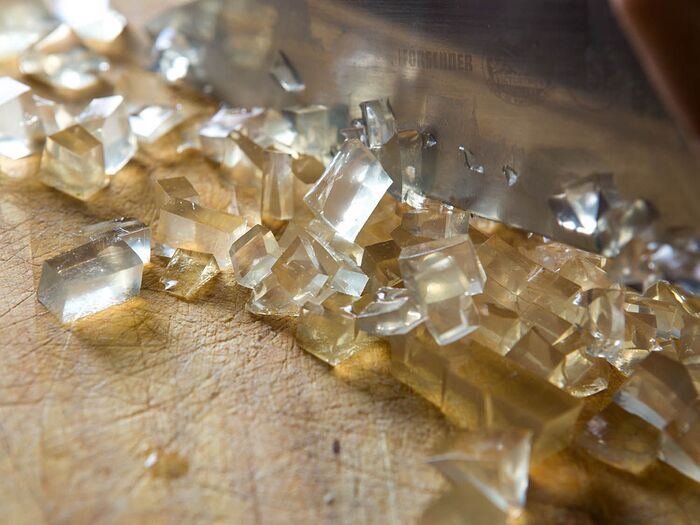 Use Gelatin to Improve Pan Sauces, Store-Bought Stocks, and Beyond

If you've only ever used gelatin to whip up a batch of Jell-O or boxed pudding, you're missing out. Considering it's sold as a completely flavorless product, gelatin is one of the culinary world's greatest unsung heroes. It makes its way into...

If I need extra body to my stock, I just use neck or wings (chicken), or feet.

As if that were a bad thing if the salsa is too thin?

And if time constraints forced you to use store-bought stock for something, would you still eschew gelatin?

seeing your post reminded to pick up a package of frozen chicken feet to add to next month’s turkey stock. usually readily available and not too pricey.

I have used it in n otherwise vegetable stock to make a faux demi. I used it in the Espagnole portion. It was delicious.

For thickening, I usually use a pinch of starch or reduce but I’m game. How much gelatin would you say would be needed to have the desired thickening effect on a hot preparation? Would it affect the taste or only the consistency?

As if that were a bad thing if the salsa is too thin?

You do you. Personally, I would not. Never.

And if time constraints forced you to use store-bought stock for something, would you still eschew gelatin?

Yes, I would either (1) use something besides stock or (2) make something else.

To take it full circle.

Salsa with ketchup added is, um, not something I would ever do.

I may be taking this too literally, but I don’t think so. Tomato sauce usually includes several ingredients. Gelatin is a single ingredient, as far as I understand, chemically identicle, and from the same or similar source as chicken feet.

I may be taking this too literally, but I don’t think so.

Yes, you are taking it too literally. But perhaps it’s my fault.

Analogies were never my strong point in real life.

My apologies then, but I happen to think it works great in a pan sauce for a chicken breast in less than an hour on a weeknight, at least when I’m out of home made broth.

I think I would file this under: personal preference and if you do, no harm, no foul.

I used “More Than Gourmet” brand reduced brown stock and chicken demi glace products this week because I wanted “good” stock for a stew I was making and knew I wasn’t going to have enough time to make similar products myself. In hindsight, I suppose I could have also added unflavored gelatin to some Better Than Bouillon broth. Either way, it got the job done. I’m not going to judge anyone who adds it to a soup, stock, or sauce any more than I’d judge someone for buying a jarred pasta sauce. We all have to get food on the table and some of us have less time than others or not as much access to certain products/ingredients as others.

No need to apologize.

As to the gelatin question, I think I actually prefer a corn starch slurry for thickening sauces and water with some extra spices for flavor.

This. If I’m making a sauce that needs to be a little thicker, Im going to starch it. Whether a slurry
of (corn, tapioca, or some other starch) a beurre manié, or a sprinkle of Wondra.

I have to wonder if this opposition from people to gelatin follows into dessert. No panna cotta or mousse, I suppose!

Cornstarch or flour don’t do the same thing as gelatin does, and I’m a bit amused at the idea that a slurry, which clouds the flavor and changes texture (vs simply providing body), is a superior option to simply using gelatin, which is derived from the same source as the trotters and other bones that people are citing as their way of extracting it.

It sounded a little doctrinaire to me, too. “I’d rather starve than use THAT.”

It’s especially amusing since the gelatin is made from animal collagen, exactly what would be extracted at home from… an animal.