I want to try this. 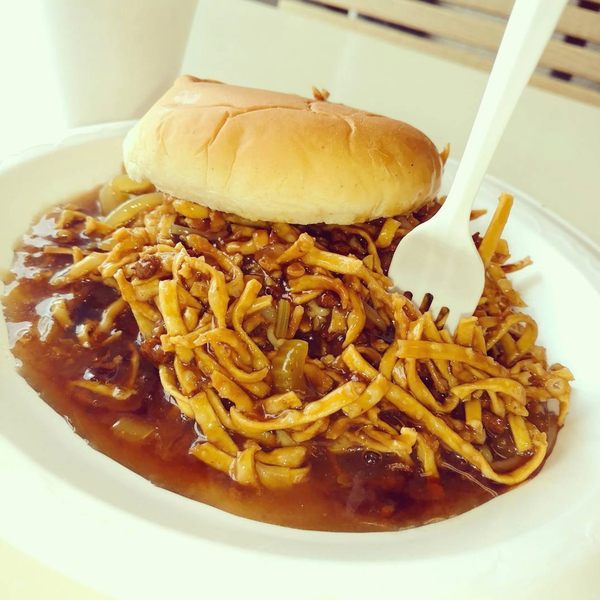 The key to this cultural mashup is a special kind of crispy noodle.

Love tortas al pastor. Still, Chicago hot Italian beef double dipped with the junk. You only get a few minutes; but it’s ecstasy.

Where is the king of all sandwiches? The ICE CREAM SANDWICH

Whenever a ice cream sandwich is mentioned, I get nostalgic about the Ben & Jerry’s ice cream sandwiches, which have been gone for over 25 years now. They were, IMO, the best ice cream sandwiches ever made. High-quality vanilla ice cream between two thin, crispy brownie bars (there may have been other flavors too). A discussion came up in Chowhound, in which a former B & J employee weighed in, explaining why they were discontinued. Apparently everyone at the factory loved them as well – it was a hand-assembled product, and a large number of “mistakes” were made in their manufacture. These “mistakes” were eaten by the factory staff, and management decided that making them wasn’t worth the trouble and expense.

The articles state that most bahn mi sandwiches have - in common with french cuisine - baguette, cheese, and pate on them. I’ve never never seen or eaten one that had cheese on it. Have you all? Where did that comment come from?

Our Story | The Laughing Cow

Explore the history of The Laughing Cow and learn how the flavor packed cheese snacks came to be, including when the cheese wedges were first introduced!

But do they put cheese on a bahn mi was my question? I’ve never seen it.

maybe they meant that Vietnamese head cheese that is common…

Yes. Banh mi street stalls have the round packages against the glass.

Another good banh mi is tinned sardines. I adore all banh mi versions. Just not the processed cheese one, unless it’s brawn/ “headcheese” then I looooove.

maybe they meant that Vietnamese head cheese that is common…

I don’t think that’s what they meant. From the article: "The Banh Mi is a Vietnamese sandwich with distinct ties to France. These ties include a baguette vessel, cheese and pâté. "

This is another stupid list. One of the best sandwiches from Italy? Apparently its a panino - in other words a sandwich. Many of the items aren’t want I would consider a sandwich. Taking a flat wrapper type starch and putting something in the middle doesn’t make it a sandwich. In the US we don’t even call them sandwiches. We call them wraps. A taco is NOT a sandwich. A worthless list that is nothing but click bait which unfortunately I clicked on.

Massachusetts law would agree regarding tacos, but NY state would not. (Interesting short summary that make me curious to know more about laws regarding food taxation, contractual obligations).

Oddly, if you heed the FDA’s guidance a grilled cheese–or any vegan\vegetarian option–is not a sandwich.