Socarrat in paella--how do you know when you've got it?

My wife made paella for the first time last night, using a new enamel paella pan on the stovetop. She ended up burning the rice in the center of the pan; the rice towards the edges was fine but didn’t quite get to socarrat stage. How do you know when you have it, before you get to the “kitchen-smells-like-burnt-rice” stage? Would it have been better to have cooked in the oven for at least some of the time? Thanks!

I don’t know if I really have a good solution. . . . it is tricky because those paella pans are very thin, so I’m sure it burned over the flame and not around the edge where there is less heat (or even over the burner if you have an electric stove). “Traditionally” i’m sure you know paella is cooked over a fire (though I rarely have seen this done even in Spain - full disclosure, not a Spain expert by any means but have been a few times). The goal would be to try and maintain as even a heat as possible across the bottom of the pan . . . . You could try one of those metal flame tamers and see if that spreads your heat out better (they are most typically used to reduce heat, but they work in high heat as well).

You could try moving the paella pan around over the flame every 5 minutes or so too . . that could help a lot too.

When I make paella inside now I have given up on the socarrat really - I save that for when I’m cooking outside and have “wider” heat.

Good luck! I love paella and it is a great dish for a crowd (I cook it in the oven when I do that). If you have more success that I typically do please let me know!

I think Thimes says most of what I think: managing heat dispersion is key. If your enameled pan is enameled cast iron with much thickness (like Le Creuset), then it will be uneven in heat over any smaller burner. There are heat dispersing items in the market, but I’ve never used them. I know a high-end pastry chef who did…

Carbon steel works well. You can even use a carbon-steel wok, but you’ll get more limited socarrat because of pan shape.

How do you know when you have it

When the liquid is near the stage of totally absorbed by the rice, use a spoon to stir slightly from time to time to avoid sticking to the pan, lower slightly the heat if necessary. Using animal fat also seem easier to get socarrat than using vegetable oil.

Personally I love socarrat. I’ve a thick non-stick aluminium paella pan, rather easy to get socarrat if I heat up more during the end of cooking.

Curious - anyone ever try to make paella in a wok?

No, but rather I’m using my paella pan as a wok on a induction top.

In a theoretical way, I think paella in wok may work on an open fire or in an oven.

For Koreans, we have an equivalent to soccarat called “nurungji,” which forms when you have correctly-made dolsot bibimbap (basically scorching hot like hell stone pot fried rice that singes your eyebrows). In other words, something that I leave to restaurants. Like soccarat, it’s definitely an art.

No. That would be fried rice, not paella.

Paella isnt something we make at home, so have no idea about how to get the socarrat. But it is the best bit when we eat it in Spanish restaurants. The clock is ticking on our annual visit to Tenerife. By the by, we went for New Years Day lunch to the Spanish members of the extended family. They cooked a lovely seafood version. No snails or rabbit. And no socarrat, either.

No. That would be fried rice, not paella.

Fried rice is when you continue to stir and toss while cooking the rice, ingredients and fat or oil in high heat. You can cook fried rice in a paella pan as well, it’s more a cooking method.

Static rice in wok, no idea if it cooks well due to its particular shape. Heat distribution can be a problem to get everything evenly cooked.

To achieve good socorrat:
1.correct rice to liquid ratio . I use bomba rice -ratio is 1:3
2. trick is to use large enough pan so that cooked rice is no more than one phalanx finger breath to achieve a good crunchy socorrat. I have 3 paella pans. a copper tin lined Alicante one for 2-3 people that I use on my indoor stove for heat, an 18" pasta negra that I use my outdoor ceramic grill for heat and a 39 " one using an emperor 39" fire pit for heat.( see my Nov 2019 thread as our outdoor paella had perfect socorrat. We built a tripod so that the 39" pan is a few inch above the fire pit, to add wood to increase heat or spray with a water bottle if too hot)
3. I precook my soffrito indoor usually. Add soffrito to my pan then rice with Evoo. Once rice is coated and turns translucent with even distribution of soffrito, I add my broth. Do not stir after broth is added.
4. Heat management is very important at this point because the bottom of the paella will always be hotter than the surface. The surface may show lots of liquid but, the bottom of the pan can quickly dry out and burn the bottom layer of rice. You’ll notice a slight film of olive oil introduced early in the process. If you evaporate your stock too quickly, this thin film of olive oil will remain atop all the ingredients as the evaporation takes place. Need for that layer of Evoo to move to bottom of pan by turning heat down
Once all visible liquid is gone, I turn down the heat and keep an eye on the bottom surface by scratching with a fork. Doing this lets me know how dry the bottom surface is and serves as a hint to keep an open ear for the crackle.
5. Some will turn up heat for a few minute when they hear the crackle but be extra careful as it may also burn the socorrat. . Cover for a few minutes before serving directly from the paella pan.
See my thread 11/2017 -for large 39"
9/2017 - for small Alicante pan as I used 1.5 cup of
rice so the cooked rice was greater than
FB
11/2019 paella using 39" pan

No, I guess a shallow flat-bottomed wok might kinda-sorta work in a pinch, but even not covered, I think a “paella” would turn out more like an “arroz” (as in arroz-the-dish, like arroz con pollo) - more casserole like - because the depth would be so much greater everywhere but around the edges.

Paella isn’t something I make often (/understatement), but I have made it moderately successfully on a gas stove in a couple of different sizes of shallow, copper-clad frying pans (not sure what they’re called in French †, but unlike my French-made “sauté pans”, they have very low sides). Over more even heat like a wood or charcoal fire (and maybe even a smooth-top range?), I expect almost any relatively shallow pan could work, including roasting pans and whatnot…

@StephanieL
Here are some pictures I found on a blistery winter day, Feb 2017
Paella cooked on a 39" pasta negra ( double thickness) using wood for heat in a 39" fire pit but we built a tripod so that the paella pan would be elevated a few inches to allow us to control heat by adding wood or quenching a too. hot fire with a small spray bottle.
You will see after soffrito is added to the bottom of the pan ( soffrito is cooked with Evoo but I also spray the pan with Evoo) , then the bomba rice, stirred till even with more Evoo as needed til rice is translucent, in goes around 1/2 -2/3 of the broth and no more stirring. You will see that ore broth is added as needed as well as rotating the paella pan for even heat. 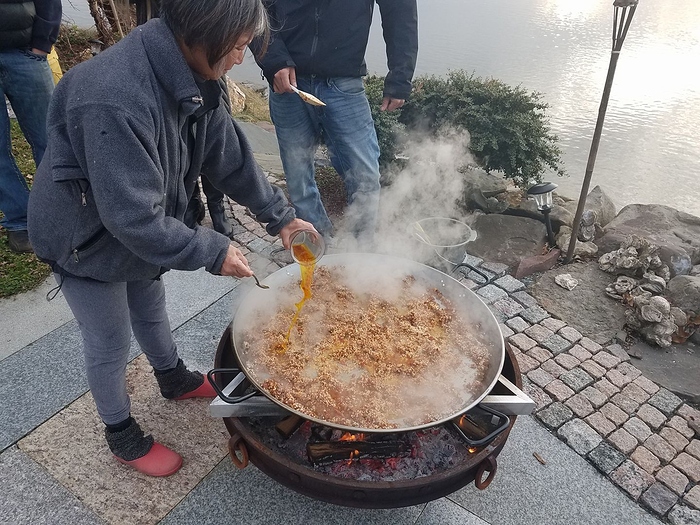 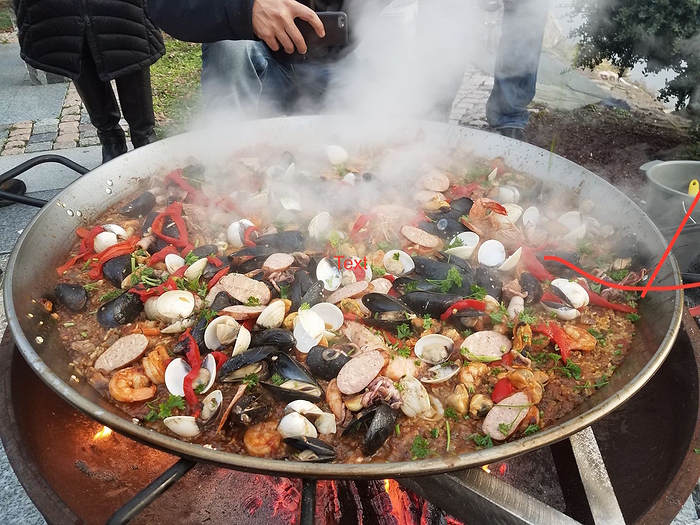 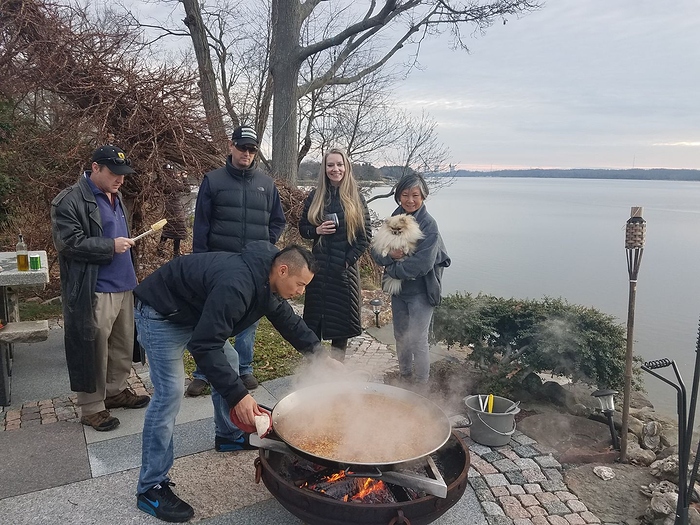 Lots of fun, guests all stay outdoor and eat from the pan.
I cannot preview pics ( wander why?) so I do not know if some are repeated. sorry!

thank you.
My other dog , Wolfie, is being held by someone not in the picture.
Old picture form 2017 but trying to show Stephanie L that temperature control is critical , that is why we made the tripod to raise the paella pan so there is enough space to add wood or to spritz with water. Also to rotate the pan for attempt to make temperature even
I usually measure just enough broth based on 3:1 ratio ( make broth out of shrimp shell and fish head and carcass) but readily have a bottle of cheap pinot grigio to add if liquid is needed. After all, it is not strict science.
You are right, paella is all about comadere, sharing friendship with friends, cooking and enjoying a meal with them .

Yes, great pictures! We’ll definitely use all these tips the next time. At the very least, assuming we’re going to make this again on the stovetop, we’ll use a diffuser and keep the pan moving.

Tangentially, an excellent tutorial on paella. Long but fascinating.

all in Spanish, so couldn’t understand the commentary, but I was impressed by the height of the flames!

The large burner on my ancient electric cooktop range died, so I’ve used the oven for many foods I used to do on the stovetop. I’m getting much more even browning on rice dishes, though I haven’t made paella. The demise of that burner is a blessing in disguise.