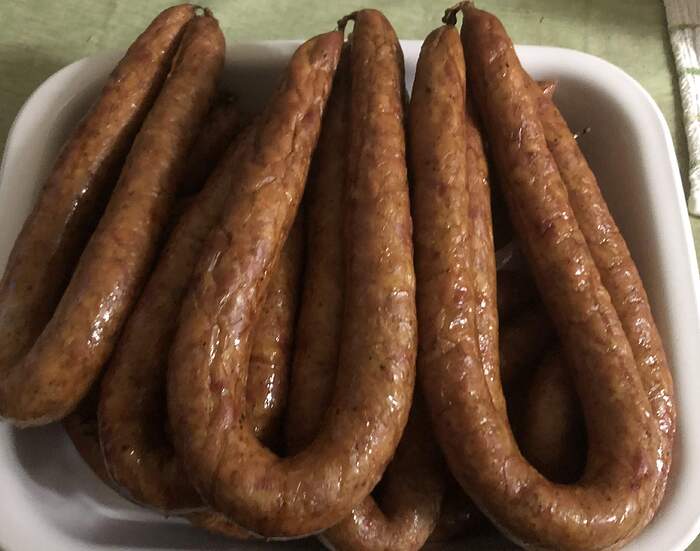 Alternatively, you may let the sausage cool down at room temperature and then refrigerate. This will result in the sausage being less plump and slightly wrinkled, but this this is my preferred method. Ice water bath removes smoke residue from surface making the sausage less smoky in flavor and pale in color.

Cure #1 is also called pink salt #1 or Prague Powder. Make sure it is Cure #1, not #2. Cure #2 is used for making dry cured meats and sausages, like salami, soprassata and similar. 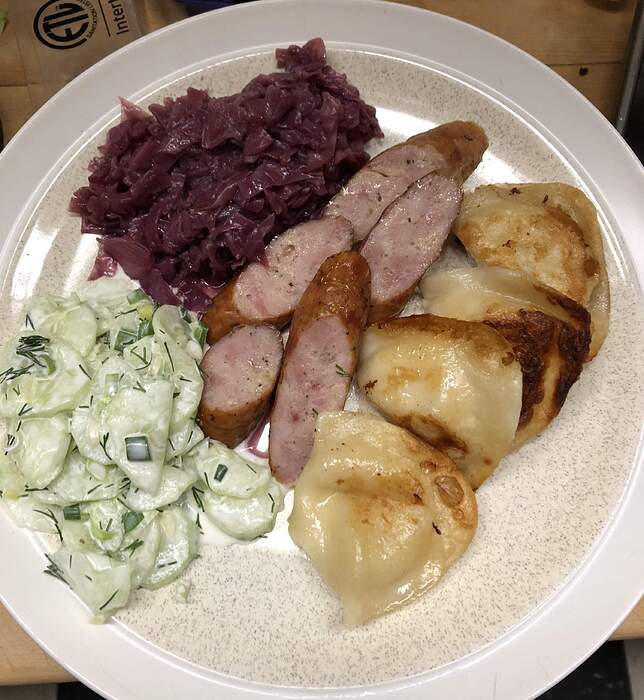 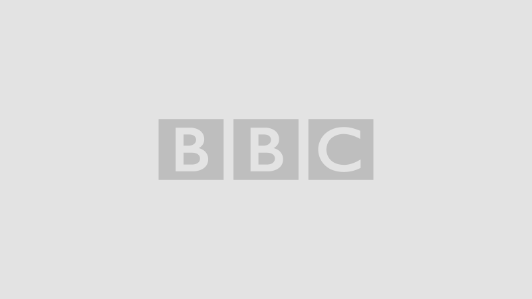 Tangy fragrant carrots are the perfect partner for this zingy marinated chicken. 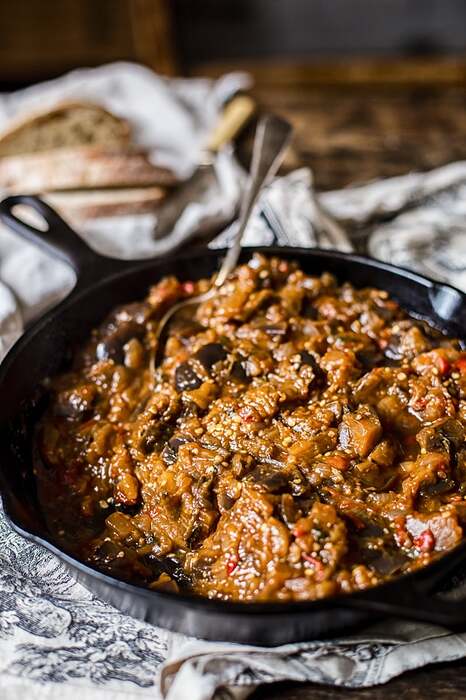 This Russian eggplant caviar is a silky smooth vegetable spread that is delicious as a warm side dish or as a tasty topping for your crusty bread!

My Russian eggplant caviar , served more like ratatouille or briam 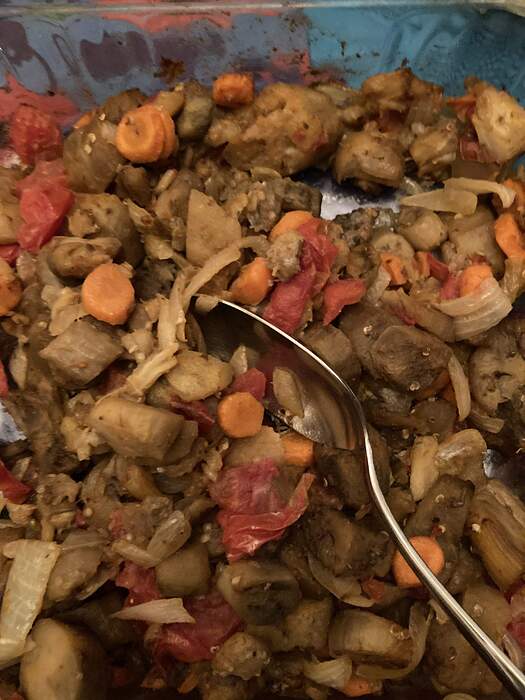 Korean carrots were a hit! 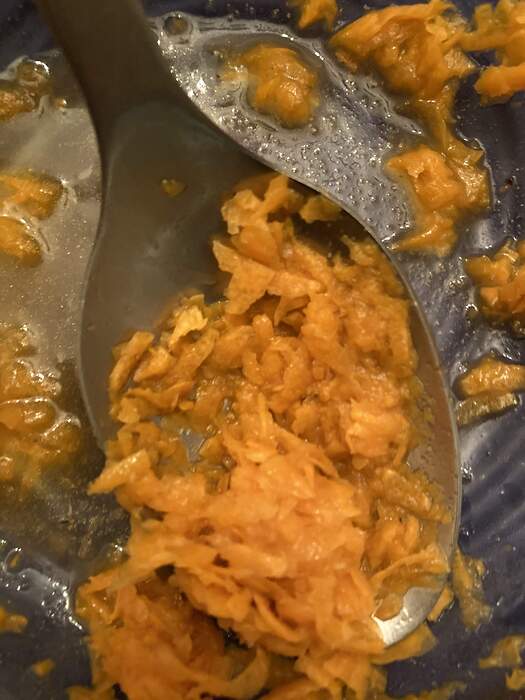 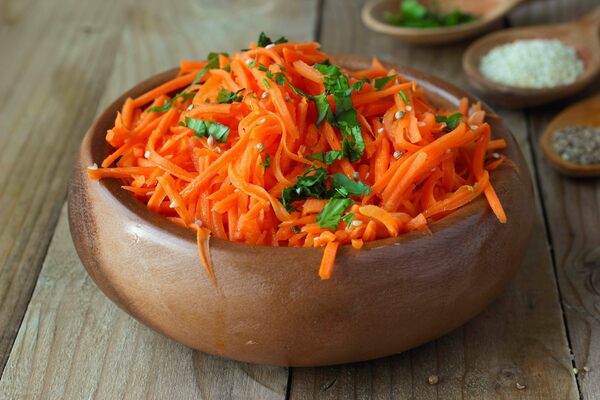 This Simple Carrot Salad Tells the Story of a Diaspora

The Koryo-saram's journey from Korea to Russia to Central Asia is reflected in every dish of morkovcha.

Thanks for the history of the pretty salad.

This makes me laugh.

A Moscow bar owner was fed up with his patrons drinking too much vodka, getting into fist fights, and destroying his china, windows, and furniture. The barkeeper’s solution, as the story goes, was to create a dish so hearty and irresistible that it would soak up the alcohol and leave his customers in gentler spirits. He layered starchy potatoes, fatty pickled herring, beets, and mayonnaise into a filling, colorful salad. The Pasta Grannies have an amazing video on the preparation of Focaccia.

I am watching this video now as I have not seen this one.

This is Italian not Slavic however, perhaps this style of stew and pasta was prepared during the Ottoman Empire … However, it is very Italian !! Like my paternal grandmother who is Italian. She used to prepare this type of winter stew. She had shown my Mom and Mother in law (who is Italian) how to make it …

Divinely delicious !!! Similar to a stew that Chef Lydia Bastianch prepared for the Pope with gnocchi instead of pasta.

The Slavic former Yugoslavian states such as Slovenia and Croatia share many noodle, pasta, dumpling, polenta and other starch culinary traditions with Northern Italy and Austria, thanks to Geography as well as History under the Venetians, Hapsburgs, Ottomans.

One of the Friulian Xmas breads is essentially Potica.

These food traditions are older than Italy is.

Realize Italians can be a wee bit possessive about pasta and gnocchi - the Slavic countries and Romania also love their polenta, noodles and dumplings!

I’m going to stop being a pedant, after this last statement, but please realize borders are artificial, and non Italian- identifying people also eat dishes that very much resemble Italian dishes.

I know well … I ate polenta in Romania … It is served with stuffed cabbage. We spent 6 weeks in Romania.
Brasov, the villages of Brasov and the Carthegian Mountain Pass villages, Transylvania and of course 2 weeks in Bucharest. Wineries, in the villages close to Castle Braun (1377) were quite amazing. The landscapes are unsurpassed.

Yes, I am aware that the food traditions of Italy, Alto Adige, Friuli, and also the countries closest to these countries do share some common denominators culinary wise.

People all over the world eat pizza – the ovens in Pompeii can verify that this focaccia creation hails from the Romans - flat breads and The Romans were in Egypt !

Yes, I agree … food, products and preparations have travelled and have also taken on another format too.

Have a nice weekend.

1 / 2 cup of Porcini Mushrooms
1 cup warm water ( to soak the mushrooms ) And strain the liquid through a fine sieve, and remove the gritty earthy parts, and set aside in clean water. They shall be added to the Dutch Oven or pot with the meat and other ingredients …

This dish was served to the Pope John Paul with potato gnocchi.

Thanks for this! I never fail to learn some trick from Pasta Grannies. They are my goddesses!

@Barca and @Phoenikia , the eastern Mediterranean “countries”, as have been defined and redefined ad infinitum, are much more a “melting pot” than America which is more of a tossed salad. Certainly there are strong feelings and defenses of specialties from valley to valley, but look to the basics and many dishes are interchangeable.

The Greeks, The Romans, The Nordics, The Tribal Indigenious, The Celtics, Egypt, The Silk Route, The Mogul Kings, The Moors, The Moroccans amongst other ages of time, all have had their input on European soils, west, north, east and south.

Doing research on Slavic cuisines. In the heat of this debat whether pasta is part of Slavic cuisine or not. I don’t think food has borders. I come across this book, talks about the historical geographical context of Istria, a peninsula now split between Croatia and Slovenia, and has strong Italian influence. 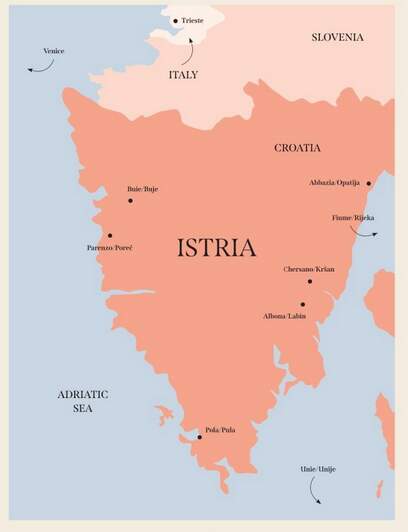 Istria has been a country of many cultures living side by side for over a thousands years. For some 500 years, the western and southern parts of the Istrian peninsula were governed by the Republic of Venice, and the eastern part, which was referred to as Imperial Istraia, by Austria.

With the rise of Napoleon and for most of the 1800s, the entire peninsula and its surrounds were part of the Austro-Hungarian empire, under the rule of the Hapsburgs.

After World War I, Istria - inclusive of Flume/Rijeka, Zara/Zadar and many islands, the largest of which is Lussino/Losinj - formed the Italian region of Venezia Giulia. After WWII, these areas were assigned to Yugoslavia, until its collapse in the early 1990s.

Istria is now split between Croatia and Slovenia, with a narrow northern strip around the fishing village of Muggia, which is part of Italy. After Croatians and Slovenes, Italians are the most populous ethnic group of Istria.

Istria: Recipes and stories from the hidden heart of Italy, Slovenia and...

I don’t think food has borders.

Anecdotes while personally meaningful frequently become logical fallacies due to cognitive bias or worse merely a transformation of the topic to themself. Anecdotes are rarely a persuasive offering of fact.

Claiming definitive origins of food is like origins of language. Both have evolved and been transported to different parts of the world.

Now I’m off to fry some eggs - which we all know originally came from Iowa because that’s where I first ate them with my German speaking family.

Uncover the History of Pasta
By: ToriAvey.com

According to her website, pasta is one of her greatest weaknesses. Few dishes can compete with their yum factor.

The History of pasta is difficult to trace for several reasons. The word itself translates TO PASTE IN ITALIAN. This is a reference to DOUGH, made from a combination of flour, water or eggs … All simple components that have been around for centuries. This makes it hard to differentiate pasta from the ancient dishes prepared with the same ingredients.

In addition, pasta has long been a food of the "common " people, so it has not received as much attention as more extravagant foods.

A common belief is it is likely to be the descendent of ancient ASIA, and a common belief about pasta is that is was brought to Italy from China by Marco Polo during the 13th century.

The Chinese used a bread fruit tree plant to create a meal similar to barley flour.

The barley like meal, Polo mentioned in his book, The Travels of Marco Polo, that several pasta like dishes were described as Lagana (lasagne). Since the original book of Polo no longer exists, the modern book on Marco Polo, is about retellings by various authors and historian experts.

NOODLES existed in Asian long before Polo´s first trip to China. Archaeologists believe that Central Asia is most likely to had been the 1st area to produce noodles thousands of years ago.

The various Arab tribes are responsible for bringing early forms of pasta westward including couscous.

Once the flour and the noodles reached the Mediterranean, the process was REFINED.

When durum wheat pasta is dried, it lasts in-definitely. So its shelf life is quite long. It is a product that became firmly rooted in Italy.

The early Spanish settlers were among the first to bring pasta to North America.

Later, Thomas Jefferson who ate his first pasta in Paris, had ordered cases from Napoli.

Browse hundreds of modern delicious recipes inspired by the past. From baba banoush to watermelon salad, join Tori Avey on a culinary journey through the ages. 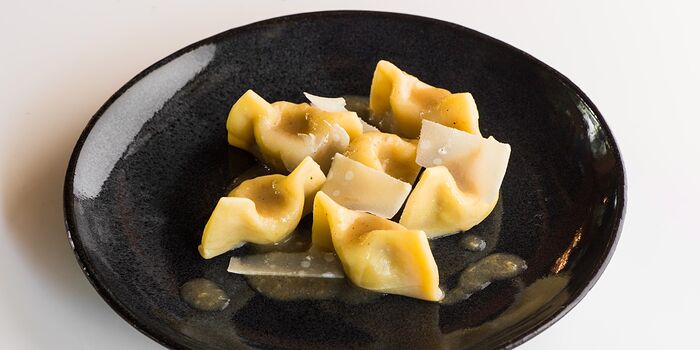 Chef Alessandro Gavagna's zlikrofi recipe is an Italian take on the classic dish from Slovenia, which is only a short hop over the border from the chef's home in Friuli.

Slovenian pasta with cabbage and bacon, a little like Hungarian noodles and cabbage 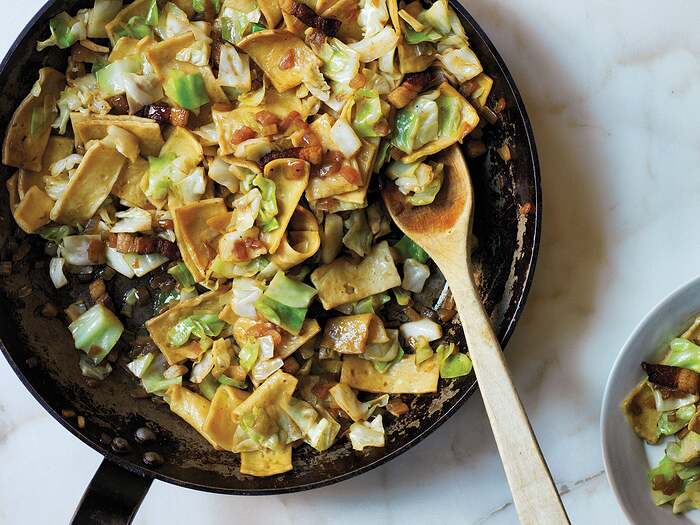 Wilted in bacon fat and spiced with cayenne, cabbage is tossed with homemade noodle dough for this traditional Slovenian pasta dish.