Was going to create a separate thread, but since this is only a few miles away from Asbury, I’ll post it here. My review the Sitting Duck (Long Branch).

Long Branch and, of course, Asbury Park have hopping restaurant scenes. However, both of these areas are as foreign to me as the landscape of Mars. If this blog is going to get to the next level, this can no longer be so. I am making it my mission to become more familiar with other Jersey Shore towns by the end of this summer. I feel like I have beaten my area (Middletown, Keyport, Red Bank, Hazlet, Holmdel, Atlantic Highlands) to death. It is time to finally explore the places that have long eluded me. Hearing this, my friend Justin took it upon himself to take me out to one of his favorite restaurants, The Sitting Duck, in Long Branch. He said it was a different kind of restaurant than you might find in some of the more posh areas of the Shore. 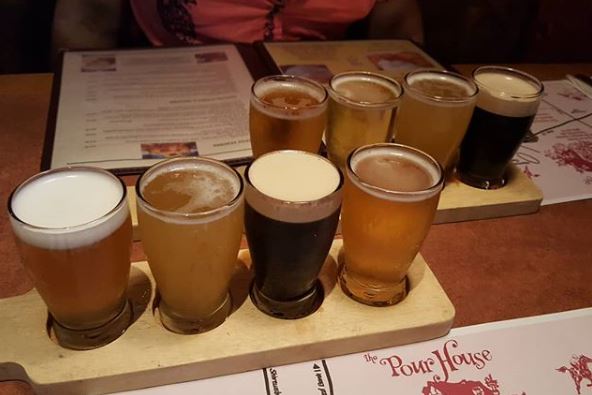 When you first walk in, The Sitting Duck reminds you of a neighborhood bar. This is not a trendy spot catering to the glitz, glamour, and B.E.N.NY’s of the Shore, but seemingly a spot for the locals to hide from such people and prospects. The bar itself is enormous, wrapping around the entire center of what was a pretty large building. The cooking, interestingly enough, is done in the middle of the bar area. If you are seated at the bar, you can see the chefs preparing your meal. There are then two walls of booths and tables, and a popcorn machine to grab a light snack on your way in. It was a cozy feeling. No pretentiousness here. The atmosphere was casual and laid back.

Justin told me about the beer paddles they offer, which for $7.99, include your choice of any four beers they have on tap. This is not a bad deal, and is a great sampler for the person who cannot make up their mind. We both went with a Harpoon Irish Stout, Leinenkugel Summer Shandy, and Modelo Especial—I cannot remember the fourth one. They laid the paddles down on the table with a list for each person so you know which beer is which. At this time we put in an order for the fried calamari appetizer.

The menu is rather large. There are fair amounts of chicken, pork, beef, and seafood. There is barbecue and pasta. Sandwiches and entrees. It took me a long time to figure out what to order until I saw the Soft Shell Crab Po’Boy sandwich on the specials list. I knew this was what I needed because it had simply been too long since I had such a crab. Justin went with the half chicken and half rack of ribs combo. His was $19.99 and mine was a dollar more than that. The food that would later arrive would be well worth the price.

We did not realize the following: Justin’s meal came with a choice of soup or salad, while mine came with both. I was not crazy over the soup choices, so I just went with the salad. This came nicely prepared with raw broccoli, cauliflower, carrots, and sliced radishes, in addition to the usual. Justin upgraded his soup to the French Onion, which he gets every time. I took a few spoonfuls, and it was really unbelievable. I am not a soup guy, and never order it (unless I am at a diner on a Thursday for Split Pea Soup day), but what he ordered would make me re-think that. The broth was on the salty side, but had a tremendous beef flavor. The aroma and taste made me close my eyes and go, “Mmm”. 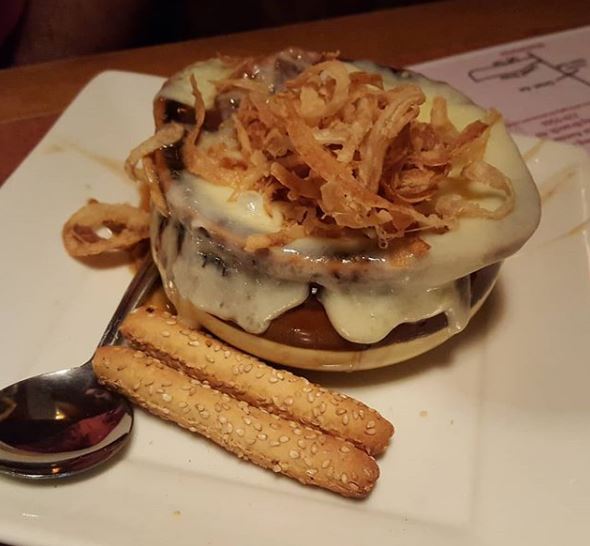 There was melted cheese slathered across the top of the crock and browned so it was both stringy and slightly crunchy. It was sprinkled with crisp, fried onions. A chunk of bread was also placed in the crock to soak in that broth. As great as all this was, it created a dilemma: we certainly did not need the calamari at this point, but it was too late. Had we realized our meals came with all this additional food, we probably would have passed. Nothing against the appetizer—it was fine, on par with what you would find in your local Italian joint—but we just did not need it. 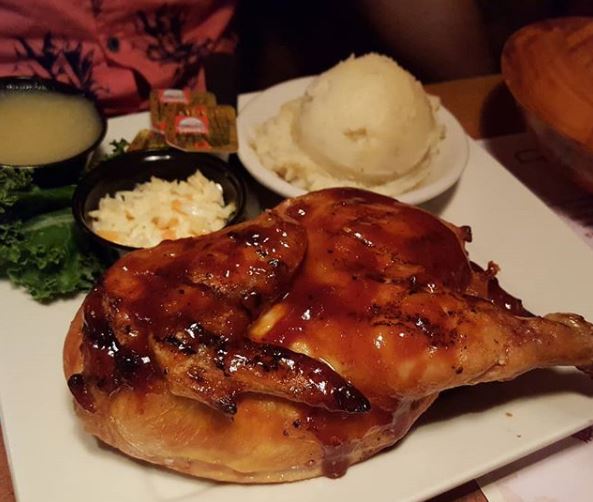 Now it was time for the entrees to hit the table. Justin’s half chicken was so large than you could not even see the barbecued ribs underneath. He enjoyed his, though most of it left in a takeout container. It came with a choice of potato (he got mashed) and apple sauce. I wanted to try a piece, but my stomach was beginning to beg for mercy and I had to save room for my sandwich. Take a look at the picture below. Not one, but two gigantic soft shell crabs. These were fried to a crisp, not greasy whatsoever, and crackled with every bite. The crusty long roll contained lettuce, tomato, and tartar sauce. There were additional tartar and cocktail sauces on the side, as well as cole slaw and fries. I did not even touch those because of how full I was. 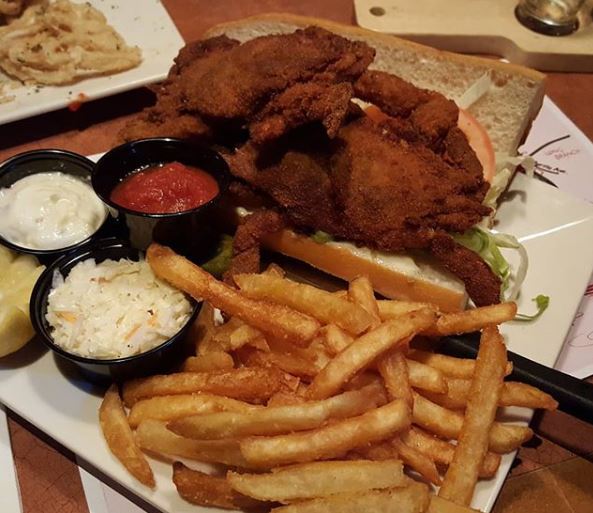 I made it my goal to finish this sandwich. The crabs were too large for the bread, so I cut the roll in half and made two mini sandwiches. I slathered some more tartar sauce on there for a heavenly seafood feast just a mile or so away from the Atlantic. Certainly if someone was watching their carb intake, they could have ditched the roll altogether and went to town on the crabs alone.

This was a perfect evening at The Sitting Duck. They left quite a first impression on me as I cannot really find one thing to complain about. I suppose the off-the-beaten-path location of this restaurant contributes to the lower prices of their meals. A $30 price tag for the soft shell crabs would have been more likely elsewhere. Move this place a mile or two down the road, and we have a whole different animal. I appreciate the relaxed atmosphere of the restaurant and did not mind the predominantly middle-aged crowd that it drew. I know some food bloggers comment on “target ages” of restaurants, but it never matters to me. Good food is good food. For all of that, I am giving a rare 4.5 out of 5 stars. I cannot wait to come back. Please keep those crabs on your menu as long as possible!

Original review and additional pictures can be found on my blog.

7 posts were merged into an existing topic: Best of Asbury [NJ]