One of the most popular breakfast options for Singaporeans is the Hainanese breakfast set of kopi (local brewed coffee), soft-boiled eggs and kaya-butter toast. 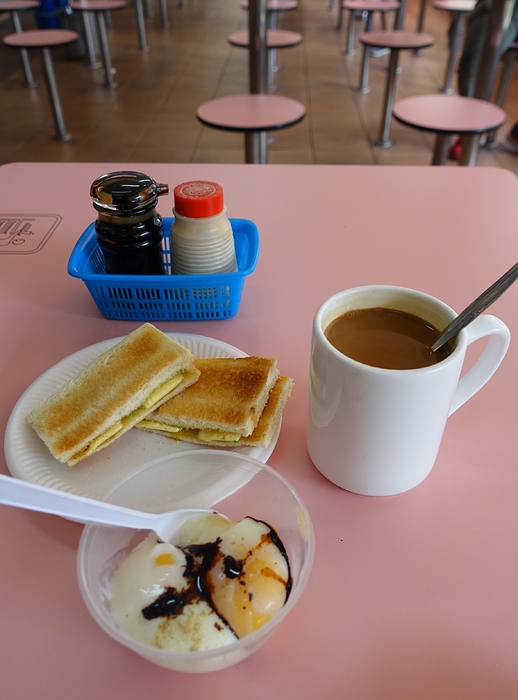 The Hainanese-Chinese in Singapore, like their brethren in Malaysia and Thailand, hailed from the Southern Chinese island of Hainan and migrated to South-East Asia en masse in the early-1900s where they then dominate the coffeeshop industry.

A bit of the history of the Hainanese, an ethnic-Chinese group known for its culinary excellence and for its dominance of the food industry in British-Malaya ever since the first Hainanese, Lim Chong Jin, stepped onto the shores of Singapore in 1841. Until today, the Hainanese dominate the running of the traditional coffeeshops/kopitiams in Singapore and Malaysia - their reputation precedes them where the food & beverage industry is concerned in this part of the world. Historically, many Hainanese worked in British or Peranakan Baba-Nyonya households during the British colonial era, and virtually every traditional coffeeshop (known as kopitiam) is Singapore and Malaysia was Hainanese-owned.

A Hainanese bartender at the Raffles, Ngiam Tong Boon, invented the legendary “Singapore Sling” cocktail in 1915. Elsewhere in Singapore, his Hainanese compatriot, Loi Ah Koon, founded Ya Kun in 1944, a kaya toast-and-coffee business which has grown into a well-established chain in Singapore today, and with far-flung branches in Japan, South Korea, China and elsewhere (http://eresources.nlb.gov.sg/infopedia/articles/SIP_1691_2010-07-08.html).

Hainanese chicken rice
Over at Swee Kee (51-53 Middle Road) in 1949, an enterprising Hainanese restaurant owner-chef, Wong Yi Guan, and his apprentice, Mok Fu Swee, improved upon the traditional poached chicken and rice dish from their Hainan island homeland to come up with the famous Hainanese chicken rice rendition which we in Singapore know today. Swee Kee operated from 1949 to 1997. It closed down when the Singapore government acquired the row of old shophouses where it was located in order to widen Middle Road. Sadly, Swee Kee never reopened as the chief “chicken chopper” decided to call it a day as he was already in his 70s then. The family decided to pack up and returned to Senai, Johore (southern Malaysia), where they continue to ply their trade today.

The Hainanese are best-known for their kopi, or local brewed coffee. Usually served hot, pre-sweetened with white sugar, and with the addition of either sweetened, condensed milk or evaporated milk, Hainanese kopi has become one of the most common beverages among Singaporeans. Usually, when ordering Hainanese coffee, the following terms are used:

The Hainanese, when roasting their coffee beans, usually add other ingredients to make the end-result more aromatic, and these could be cocoa, butter, sugar and/or sesame seeds.

In Singapore, the most-established Hainanese coffeeshop chains are Ya Kun and Killiney Road, although newbies such as Toast Box provide some stiff competition.

My fave spot for a traditional Hainanese coffee-and-toast breakfast at the moment is Cafe Port at the Golden Mile Food Centre. 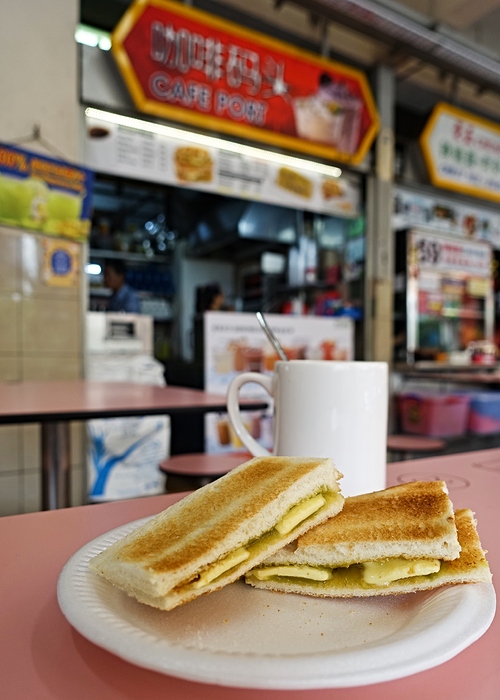 Despite the similarities of the Hainanese breakfast set here and the ones in Malaysia, there are subtle differences between the way Singaporeans prefer to take their soft-boiled eggs: sprinkled with thick, dark soysauce, and the way Malaysians like theirs: with the saltier light soysauce. 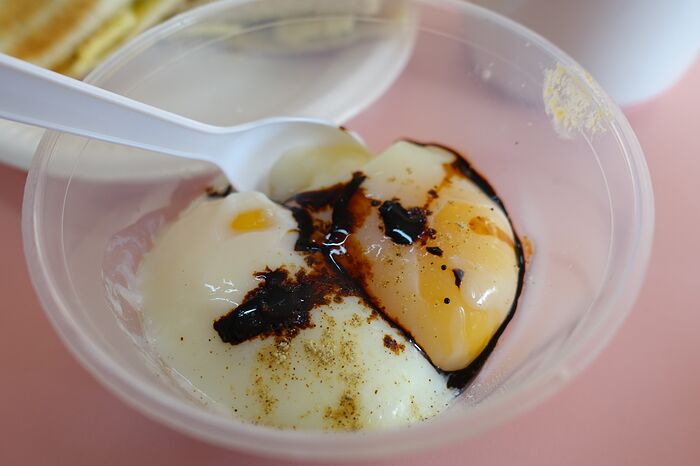 As for the kaya toasts, Singaporeans prefer their butter served in cold slices, whereas Malaysians opt for melted butter or margarine. 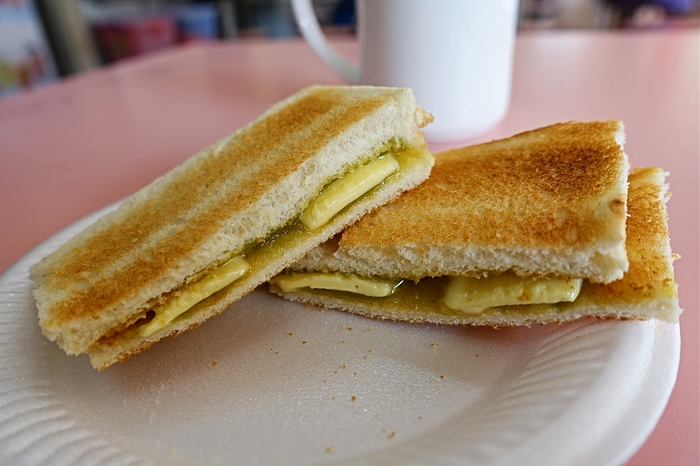 Despite the subtle differences, perhaps slight regional variances in taste & preference, the Hainanese breakfast in Singapore, Malaysia and Thailand all share the same origins and culinary heritage.

Their counterpart in Thailand - Eiah-Sae in Chinatown Bangkok:

Eiah-Sae (Est. 1928) on Thanon Phat Sai, off Thanon Yaowarat (Bangkok Chinatown) is perhaps one of the last two traditional coffee-shops in town. It’s a rather dingy, if atmospheric, spot patronised mainly by older Teochew-Chinese men - tradesmen, writers, local politicians, teachers, retirees, restaurateurs, people from all walks of life in Bangkok Chinatown, Samphaeng. [DSC07903] The signboard at the front entrance bears the name “Eiah-Sae”, inscribed in Thai but meaning “Fortune Incoming”…