Yelp seems to be maintaining its new restaurants listing after all (scuttlebutt was that they were phasing out this feature) and the listing that caught my eye was for Silk Road in the Stonestown Mall Food Court. According to Yelp reviews, the owner is from Kyrgyzstan (which borders Kazakhstan and Xinjiang) and the food appears to include Uyghur classics. Per Yelp reviews and pics, offerings include laghman (“lagman souce” and “home-cooked noodles” are separate items on the steam table menu), samsas, piroshkis, manti, plov, and a lamb stew of sorts. It’ll be a while before I’m mobile enough to get out to Stownstown to check it out, so I’ll appreciate any reports here. 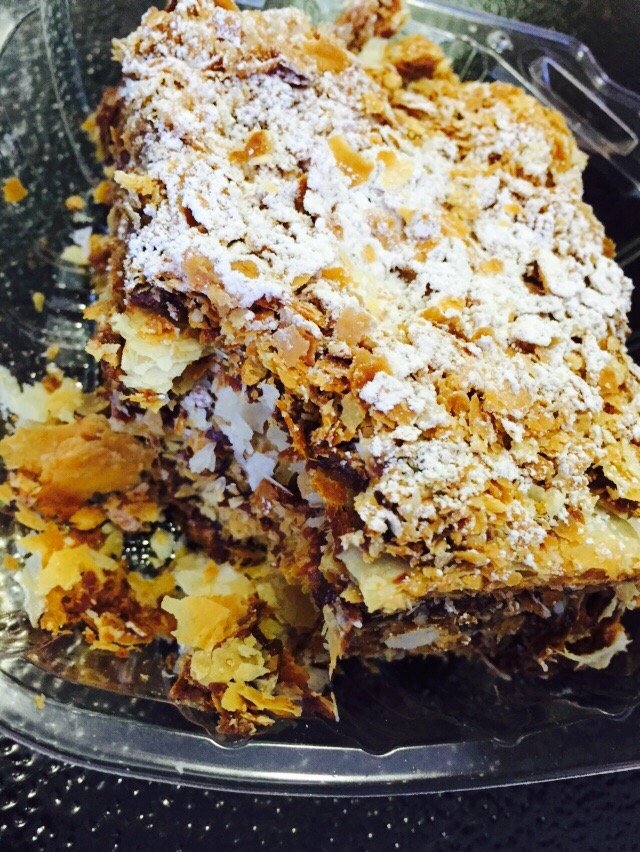 1 Like
How Stonestown Galleria became a culinary destination
It's hot! Where do you like to go during the rare Bay Area heatwave?
Underrepresented national cuisines in the SFBA
hyperbowler March 19, 2016, 6:32pm #2

Thanks for the tip, @Souperman! Central Asian food, not including Afghanistan food, is hard to come by in the Bay Area, so I was excited to try it. Other places that come to mind are some dishes at Baltica in San Mateo, Eurasia in Oakland, and Uyghur restaurants Uyghur Taamliri in SF and Eden Silk Road Cuisine in Fremont. 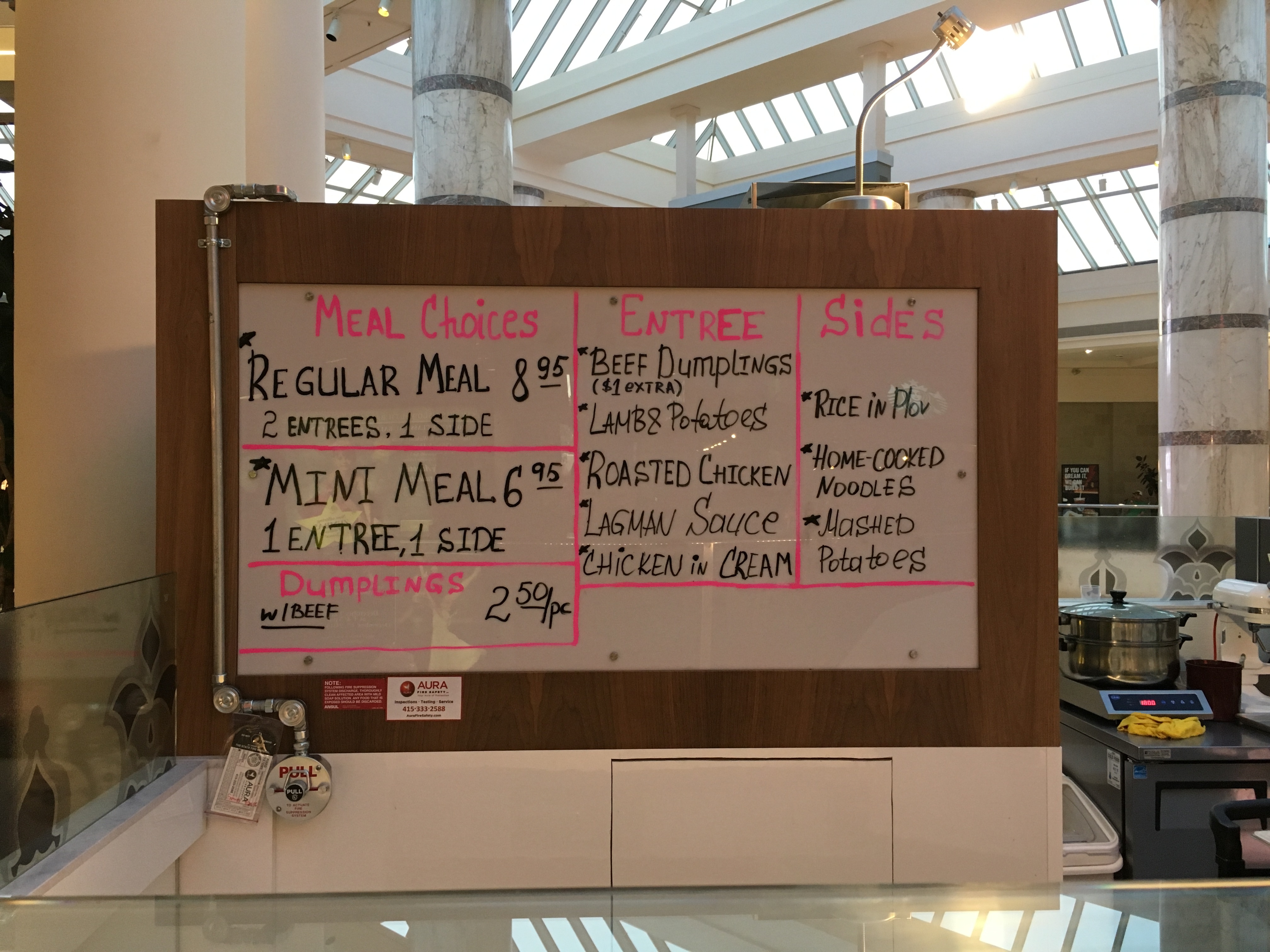 The owner of Silk Road, and workers, are from Kyrgyzstan and they were busy enough I didn’t get the full story of how they came to open a Central Asian place on the 2nd floor of a mall.

Entrees and sides are served from steamer trays, and baked goods are in display cases. Everything looked fresh when I stopped by for recon near closing, and at lunchtime when I ate there. They’re still finding out what works best, and plan to make their own noodles, hand-stretched lagman, once they find their groove.

I recently cooked a recipe for Xinjiang-style laghman sauce from Beyond the Great Wall, so I was excited to compare it to Silk Road’s version. Their lagman sauce is currently available with spaghetti, or I suppose mashed potatoes or plov (a pilaf) if you prefer. I just asked for a sample. Meat, garlic, onion, bell peppers, and tomatoes were common between their and Beyond the Great Wall’s versions, and those ingredients also appear in local Chinese and Uyghur restaurants the serve lagman, Silk Road’s version also has celery, which is used sparingly and brings a rounded, herbal quality to the sauce. Some spicing beyond black pepper added to the complexity, but I’m not sure what else they used. 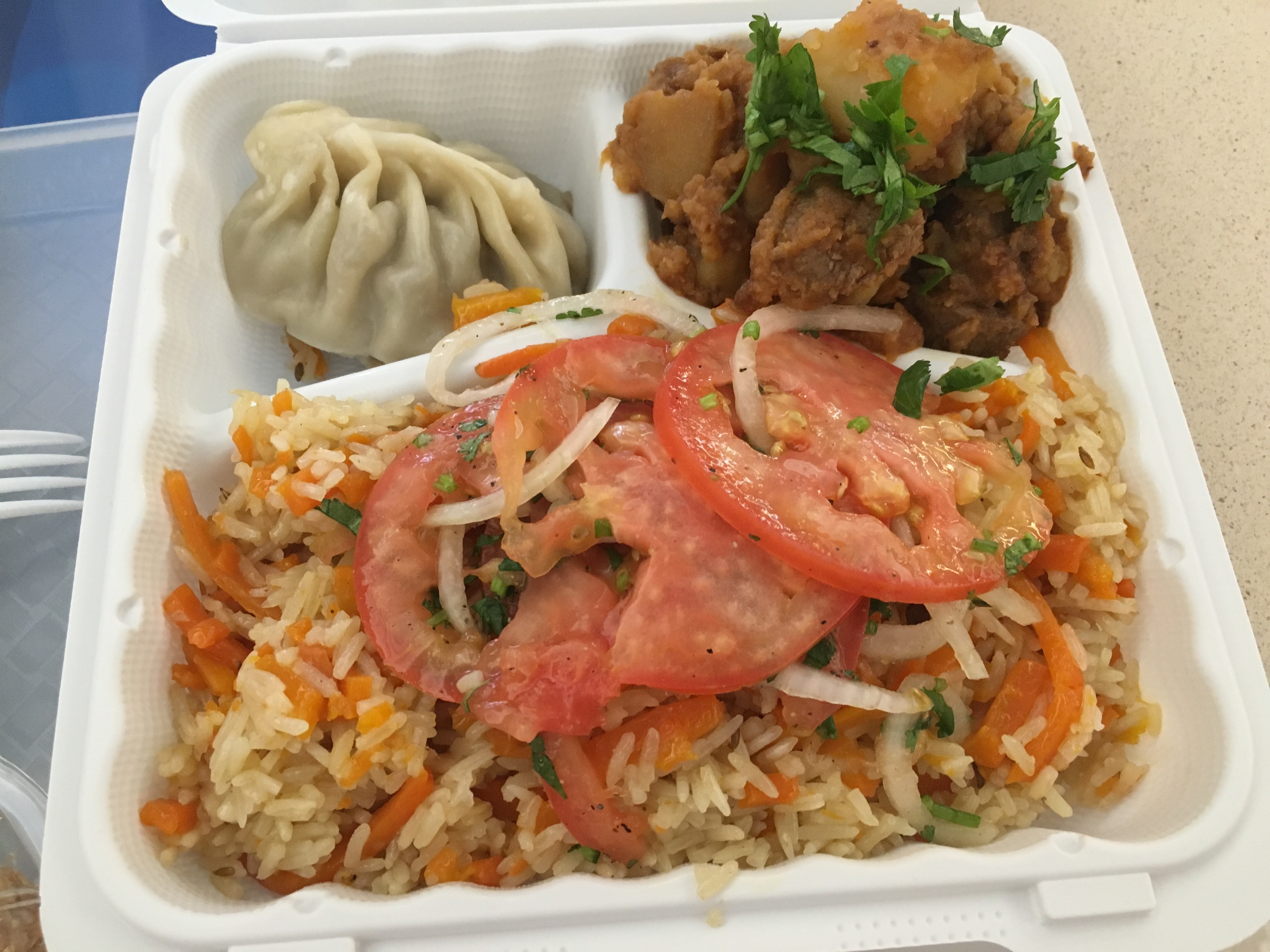 The plov, a pilaf, was great. Lots of tender carrots, subtle amount of cumin, and not too sweet. It benefited from some acidity, so make sure to ask for some tomato and onion salad.

Steamed beef dumplings have chopped (not ground) pieces of beef, onion, and a whallop of black pepper. The bottoms have cracks, and the top creases got hard, but it’s an enjoyable enough dumpling that I went back for seconds. 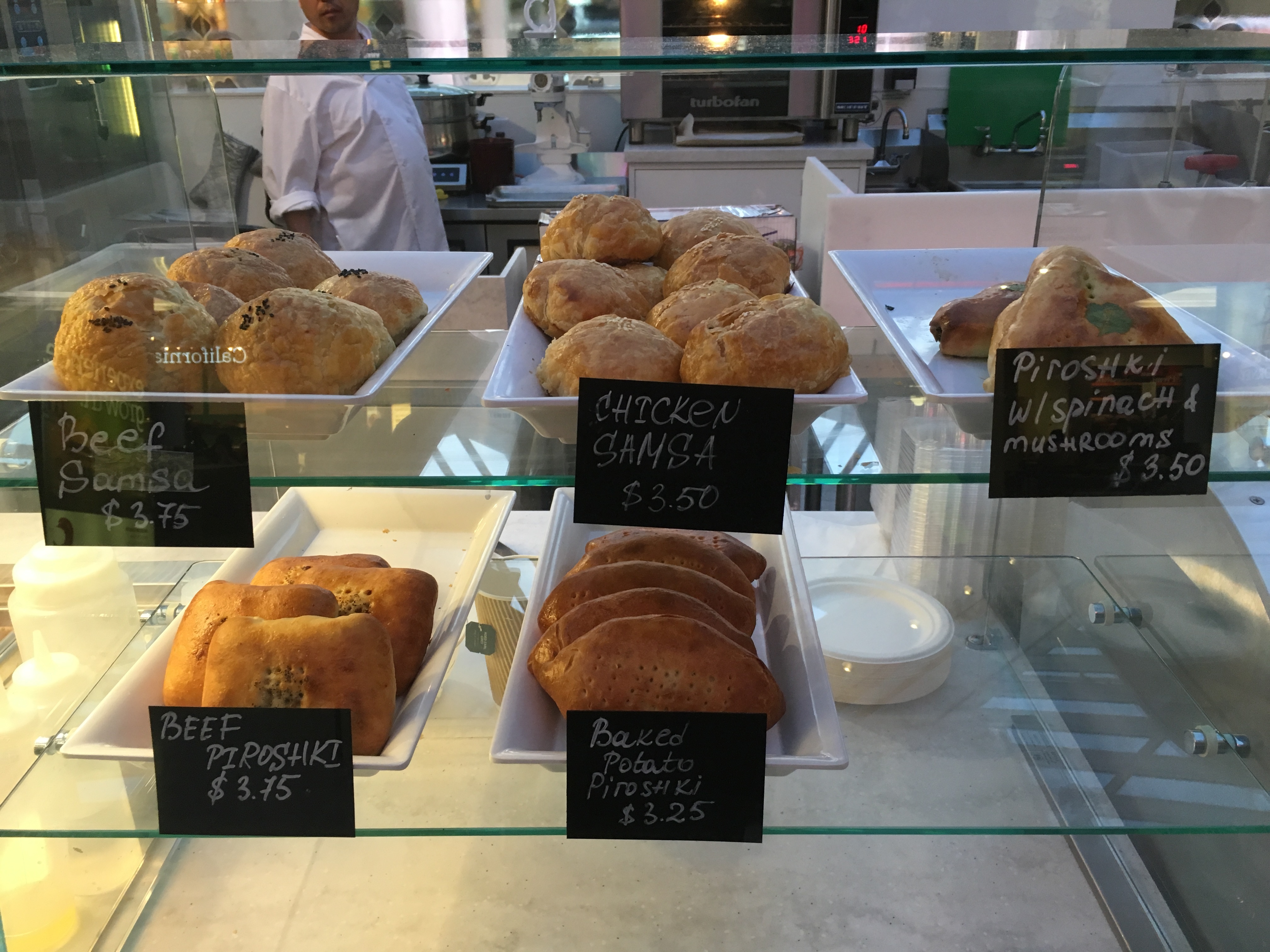 Central Asian lamb and potatoes was simple and hearty, and that description applies to much of their menu. 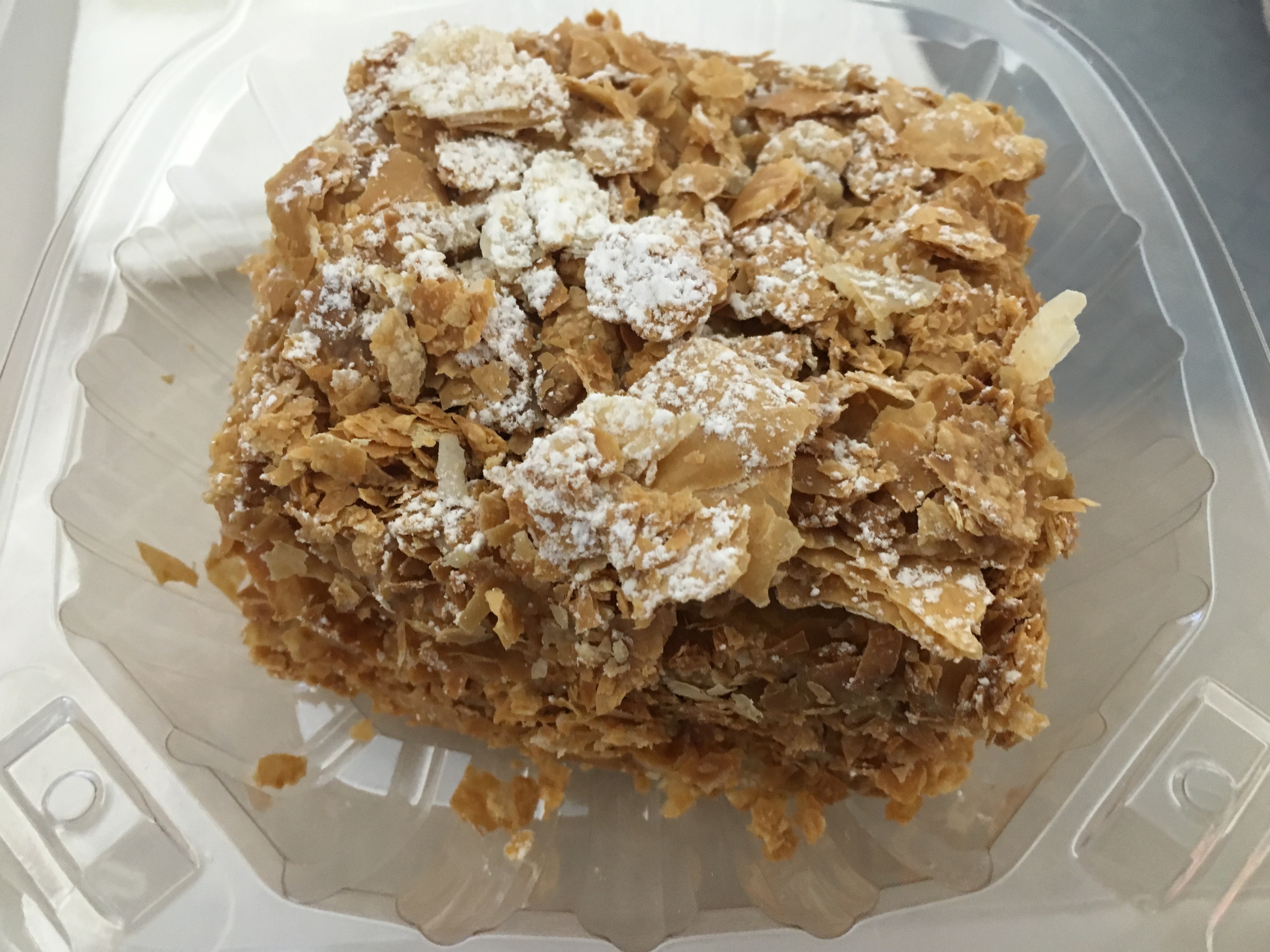 They make the desserts in house. The napoleon was lightly filled with a custard, and the layers of soft and crumbly dough made it easier to eat than a more crispy, European?, style napoleon.

Stonestown has some interesting options. There’s a lot of stuff at the Sunday Farmer’s Market, including Shandong Pan Fried Dumplings at Happy Dumpling. I didn’t like Love Berry’s dole whip, but I’ll note its existence for fans of the drink (see also Pineapples at 296 Ocean Ave).

Odd place for the Kyrgyzstan owners indeed. The plov sure looks great. 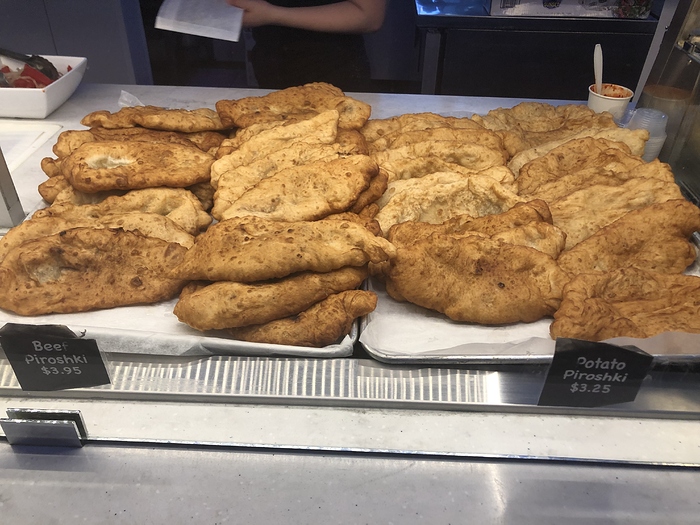 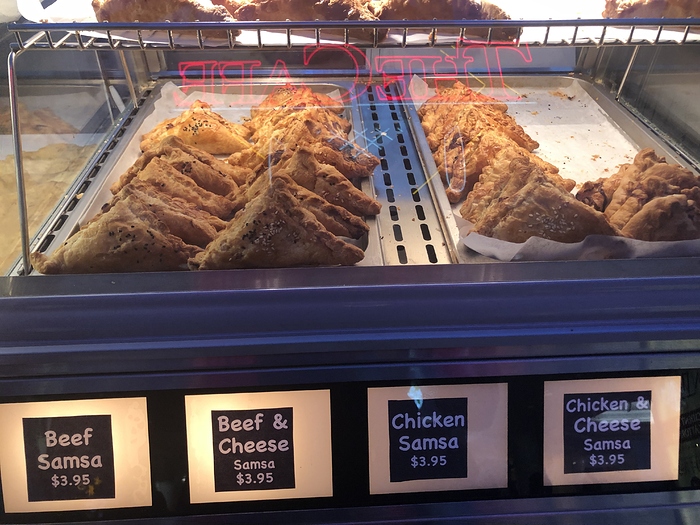 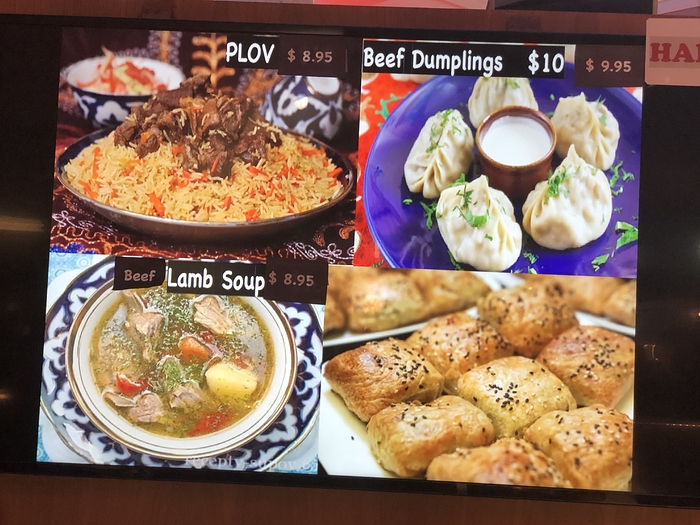 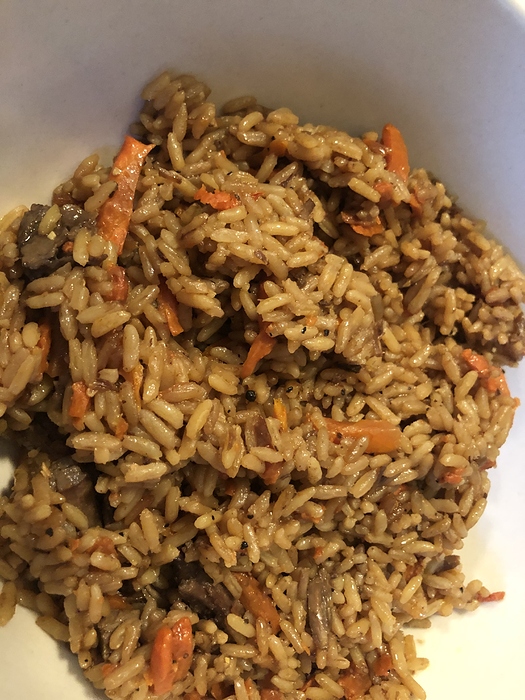 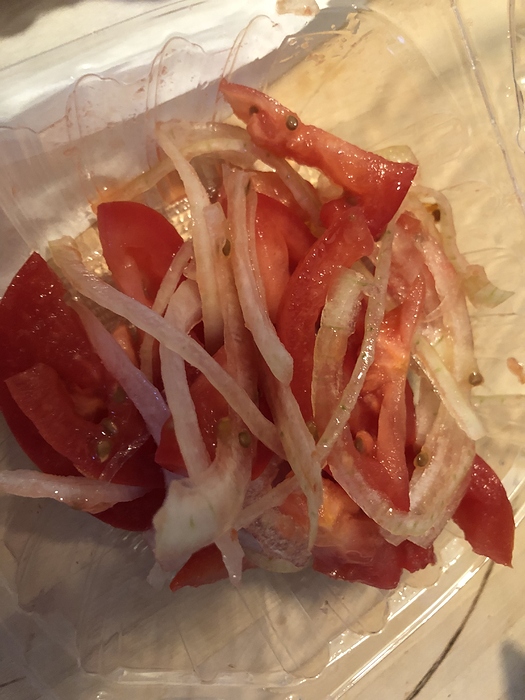 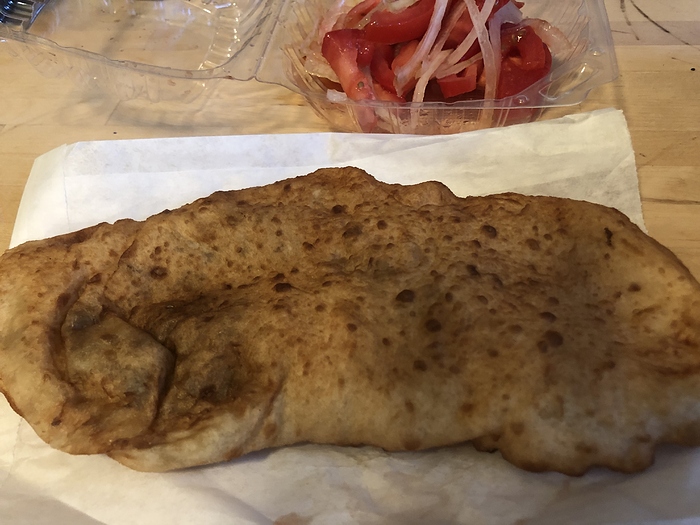 CDC5A8C2-3B0B-4580-97EA-1C5F57714B7C.jpeg4032×3024 2.44 MB
Because I have an 11 year old I find myself at the Stonestown Mall more often than I care to admit. Typically I try to avoid eating there, but based on this recent thread [How Stonestown Galleria became a culinary destination] I decided to get some take out from Silk Road. I got the Plov that came with a simple tomato and onion side and the cheese and beef piroshki. Plov was made with beef and plenty of carrots, and the onion and tomato salad provided a bright counterpoint. By far the homiest tasting food I have ever gotten at a mall. I heated the piroshki up in my toaster oven and came out great. Nice balance of filling, not stuffed and the dough had a pleasant sour note. Friday night at peak dinner hour and I was their only customer while the other places in the food court had lines - I fear for their survival.

By the way that new souffle pancake place only had half a dozen people in line at that hour, so if you are looking to eat trendy pancakes come at night.

Thanks for the report! Looks like I have an excuse to head to Stonestown

Is the piroshki baked or deep fried? It looks a bit different than the baked I remember.

Good question, I would guess fried but not sure. They had a fry-bread texture.

Re the pancake place: I finally made it by last night to scope it out. (Didn’t actually eat there - I had already stopped at Marugame Udon after a run to Trader Joe’s.) At 8pm there was no wait (they are open till 9 on weeknights).

However, the lack of a wait was likely, I think, because they were already sold out of the “premium” souffle-style pancakes. Gram makes two tiers of pancakes: you can get more-or-less standard pancakes all day, but they only make 90 orders of the souffle-style per day, in three batches, at 11am, 3pm, and 6pm. So while going at an off-hour is a good strategy if you don’t care about which kind of pancakes you’ll get, if you show up at 6 on a weeknight for the souffle-style, it’s still definitely possible there will be too long a line to snag a ticket for one of those 30 orders. 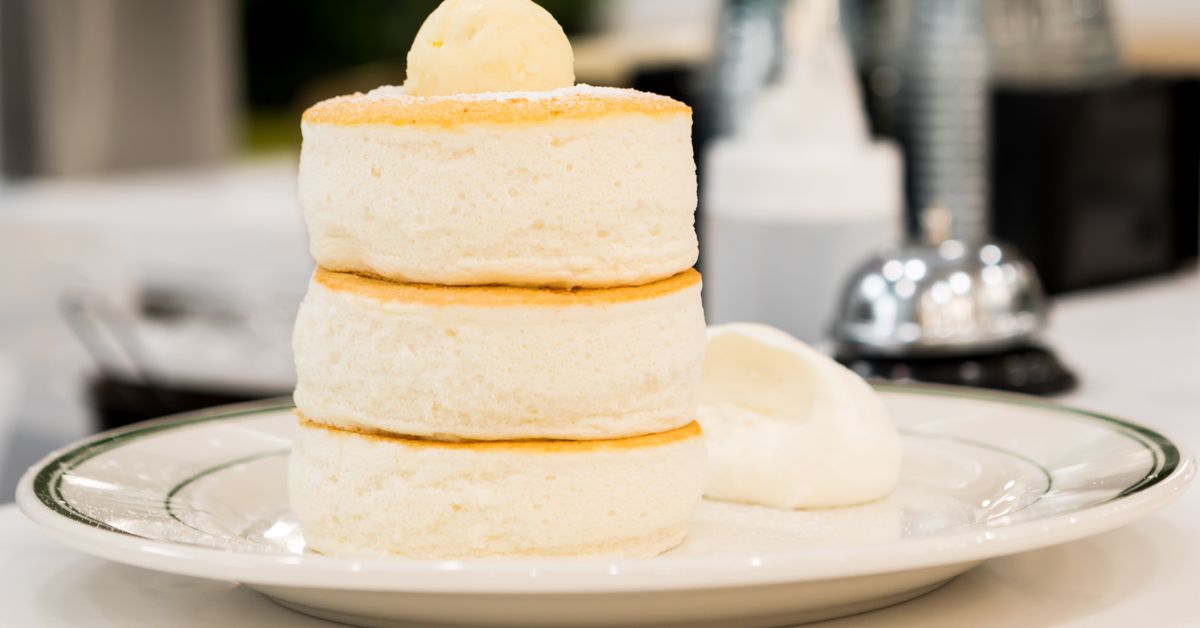 Here’s everything you need to know before lining up — yes, there will be lines — at Gram Cafe and Pancakes

Ahh - the faux scarcity model, that explains the lack of line! I’m not a big pancake guy, jiggly or otherwise, so will have to wait for others to report.

Re the Japanese Souffle Pancakes - Clipped this out of the NY Times a couple of weeks ago and edited it for a foodie newsletter I send out. Oh, the irony:

While US foodies are going mad for the Japanese souffle pancake - an outpost has just opened in SF for the Instagram sensation - the NYTimes reports that Japan is already over the craze and now concentrating on regular pancakes. https://www.nytimes.com/japanese-souffle-pancakes.html.

(The article has a link to the recipe, but if you’re approaching your 5 free articles per month NYT limit, here’s the direct link: https://cooking.nytimes.com/japanese-souffle-pancakes)