I concur I think it’s too late to change venue at this time.

I think it’s a little late to change the venue in case someone doesn’t get the word but i’ll be wherever is decided.

10-4…Middletown outback it is!

I will be tail gating in the parking lot lol

I will be there a little early myself.

Didn’t mean to cause a ruckus here. See everyone at Outback at 6.

We rent out a shrimp boat and go catch ourselves an all you can eat feast.

I won’t be able to make du to work but I look forward to details and hope everyone truly eats all they can eat.
I’m taking the points and puttiNg my money on CJ in an upset over JR tonight folks.

Well here is the long and short of Shimp-a-pa-looza 18’. It was typical for an Outback experience, @BossaNova claimed not to have been to one in 15+ years, so he was a bit apprehensive. @seal and I hadn’t been to an Outback in 4-5 years, I explained nothing is going to be offensive, are the steaks great? No, but they aren’t bad either. I ordered the “large” boneless rib eye, I really don’t think this is a legit cut @seal warned he heard the cuts were rather thin (I hope he took a pic of his steak) but my steak was harmless. All steaks were cooked accordingly and I think I’m speaking for everyone when I say: “they were fine”.

The shrimp did come fast and furious, they were tiny like 40-50’s I would guess. I preferred the fried, the cocktail sauce was sweet vs. spicy, like they literally put sugar in it. The server/service was excellent, they didn’t hold back on delivering the orders of shrimp. I would say there were about a dozen per order which means I probably had about 4 dozen, maybe 5?

Per the pick @seal shells are on the left, mine on the right. Yes we shared a shell plate, because sharing is caring! It should be noted that @seal did NOT eat his steak, opting instead to concentrate his appetite strictly on the shrimp, so I do believe his total is greater than mine, although we did not count.

I would like to give a shout out to @gcaggiano it was great getting to meet him, hopefully next time you come out of your shell a little more, I told you none of us bite!! (although @BossaNova might nibble)

@ $ 48(?) a piece including tax - tip + one cocktail are you getting what you pay for??? Not with the steak but I guess with the shrimp. Will I ever go back and do this again, no. lol The company far surpassed the food.

Shout out to @corvette_johnny and @CurlzNJ a pleasure as always sharing a meal and time with the two of you as well! Everyone post your pics! (hey CJ I think you owe me $7.00 I think there were two funny jokes and 3 non-funny) 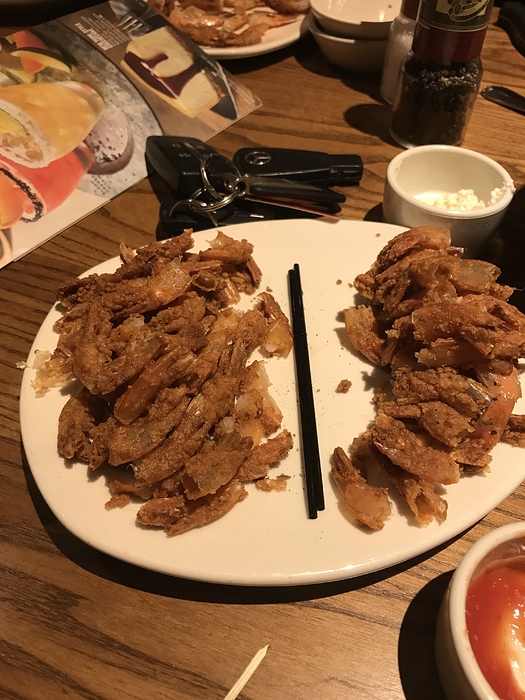 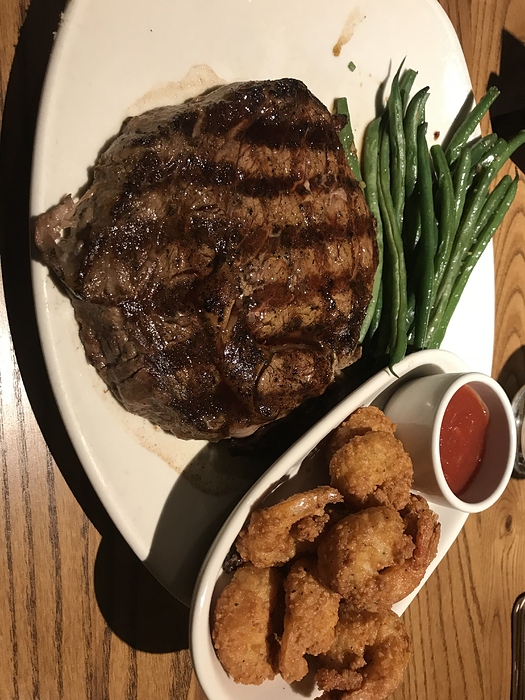 So, although it will probably be at least another 15 or 20 years again until I return Outback wasn’t as bad as I thought it might be. The steak was cooked properly and the shrimp, while small were tasty in the garlic butter. The service was good and as @NotJrvedivici mentioned they were quick and generous on the reorders of shrimp.

As always the company and banter was the highlight of the evening. Always great to see @NotJrvedivici, @seal, @CurlzNJ, @corvette_johnny and nice to finally meet @gcaggiano, although he didn’t look as I expected from the pictures he’s posted.

Picture of my steak, potato and first order of garlic shrimp below. 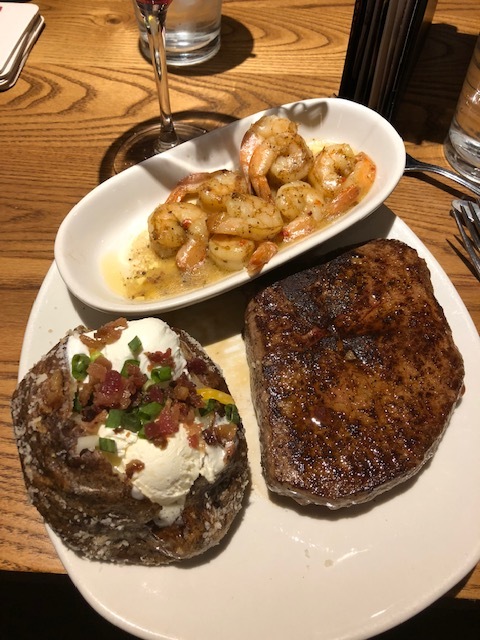 I’ll echo the fact that it was great to finally meet @corvette_johnny and @gcaggiano after posting alongside them for so long! And I’ll thank all of you again for picking up my part of the tab…very sweet of you!

We’re going to get a dim sum HOdown set, so watch the big are for an announcement soon!

Ummm you guys must have met a ghost because I wasn’t there! LOL

How did the $15.99 mentioned upthread turn into $48?! (This is what I mean when I talk about not wanting to be surprised.)

I was wondering the same thing! Those $30 cocktails will really get you!

I’m confused, was @gcaggiano actually there? I like how this is turning him into a mythical creature!!!

Hope I can make the Dim Sum HO Down and actually meet some of you in person.

What Dim Sum HO Down?

I would say the difference between the $ 15.99 which @seal quoted and the $ 23. would be we each upgraded our steaks to some extent, so I’ll assume that was the difference. Other than that all I can say is go and ask for the $15.99 and tell us what you get!

I will clarify that I was NOT there.

You really are a shy guy huh? I didn’t mean to “expose” you, I know you were a bit apprehensive last night, my apologies if you didn’t want it mentioned here but I guess the cat’s out of the bad now. My bad.