I’m about to have several mid-week afternoons available for tele-commuting, and would like to target lunch places that I can’t normally get to. Mainly, I’m looking for places that are only open Monday-Friday and which close before dinnertime. Any additional suggestions? I’m mostly interested in brick and mortar places, but I’d be open to trucks that don’t attend Off the Grid. Places in SF, Berkeley, the Peninsula, South Bay, and Oakland would all be fine.

Bette’s To-Go on Fourth St. in Berkeley has good sandwiches and salads. Not on the menu: they’ll add a scoop of just about any salad to a bed of greens. Salmon salad over greens is a favorite.

Thanks! I like Bette’s (they don’t qualify for the post though-- they’re open on weekends, which is when I’ve eaten there before. I’m looking for special places that my M-F 9-5 job normally prevents me from getting to).

Do you know of any other weekday-only lunch places in Berkeley? When I lived in the East Bay, I used to go to Stag’s Lunchette and Fusebox, but they’ve thankfully expanded their hours to enable me to get there on weekends.

I’m curious, why only weekdays? I don’t know of any places in town that are open weekdays but not on weekends.

I’m curious, why only weekdays? I don’t know of any places in town that are open weekdays but not on weekends.

I work 9-5, M-F on the Peninsula. That means I can only get to, say, the Sentinel, on one of the rare occasions when I have a day off. I’m looking for other places that are awesome, but which work precludes me from trying.

The Sentinel is a good call. I was finally able to get there while attending a conference in October. Their oatmeal is as good as I’ve had and they have unusual breakfast specials too. I had a meaty pork and beans one morning, but was too late for biscuits and ham gravy.

Noir City is coming up soon.

Good oatmeal? I think you may have just help me plan a day – thank you!

Awesome, please make a new thread about the Castro for the noir city. I will check out the lineup tonight. In terms of new restaurants in that neighborhood, a number of places have shut down recently, a bunch of coffee places have opened, and there is a hot dog place right next to the theater. And if there any must see movies, please send me a private message!

I was in the city for 4 days and I had oatmeal 3 times. They cook it with blueberries so it has a purplish tinge. They add diced apple and chopped nuts. Ask them to hold the sugar. The 1st morning the server added enough sugar that I didn’t really care for it. It doesn’t need much, if any. I don’t have reason to be in the city on weekday mornings, but if I did I would definitely return to The Sentinal. You may be able to get a half order. I did one day, but then it was all they had left at 9:30. Their oatmeal was head and shoulders taste and pricewise above any of the other places I looked at along Market to Mason.

You could check out Joann’s on El Camino Real in SSF. I haven’t been there in years, but their muffins used to be excellent. Most seem to still like it on Yelp.

Not a lot of classic noir this year, but there are some interesting not-really-noir. As far as the Castro is concerned, I have pretty much settled into a routine of Kasa, Bi Rite, Tartine and Rossi’s Deli.

I accidentally closed the IE session where I started this post. HO saves your post even if you haven’t published it. I doubt that CH would be so forgiving.

Have you tried Amawele’s in Rincon Center? They are only open M-F for lunch. You don’t get a lot of chances to try traditional South African food like Bunny Chow or a Durban Curry Roll.

I like Marcella’s, and Amawele’s is another good choice.

And this may seem like an odd choice, but…I really like the roasted chicken at Foccaccia. 1/4 chicken with two sides for $7.95. Best for a nice day when you can eat outside (and it looks like we’ll never, ever have one of those again, so maybe not that useful a suggestion).

Then there’s Eatsa, the automat-style place in Rincon Center. Much as I love the idea of avoiding human contact, it looks kind of healthy (and is thus of no interest to me). Still, it has long lines, so some people seem to like it.

A couple general observations about eating lunch downtown: 1) it’s significantly more expensive than it was just a few years ago–inexpensive options have been reduced to, well, Lee’s; and 2) everything is super-crowded all the time, so I’d recommend going before 11:30 if you don’t want to wait in long lines.

Amawale’s was closed on Christmas Eve, but I did some damage elsewhere then and the day before. 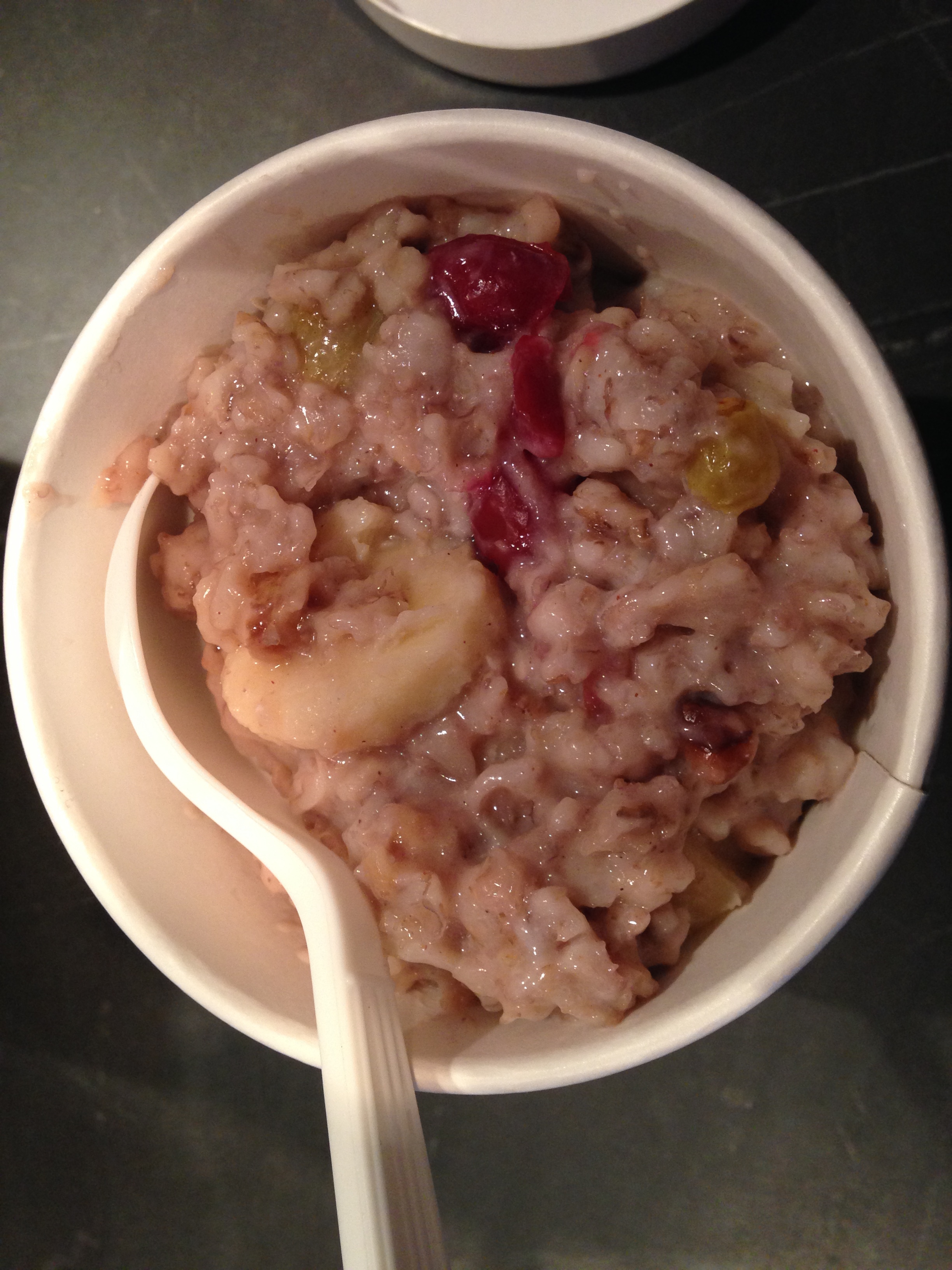 The Sentinel’s oatmeal was very good. They don’t use stone ground oats, but they made up for it with tons of nuts, dried fruit, and fresh fruit. 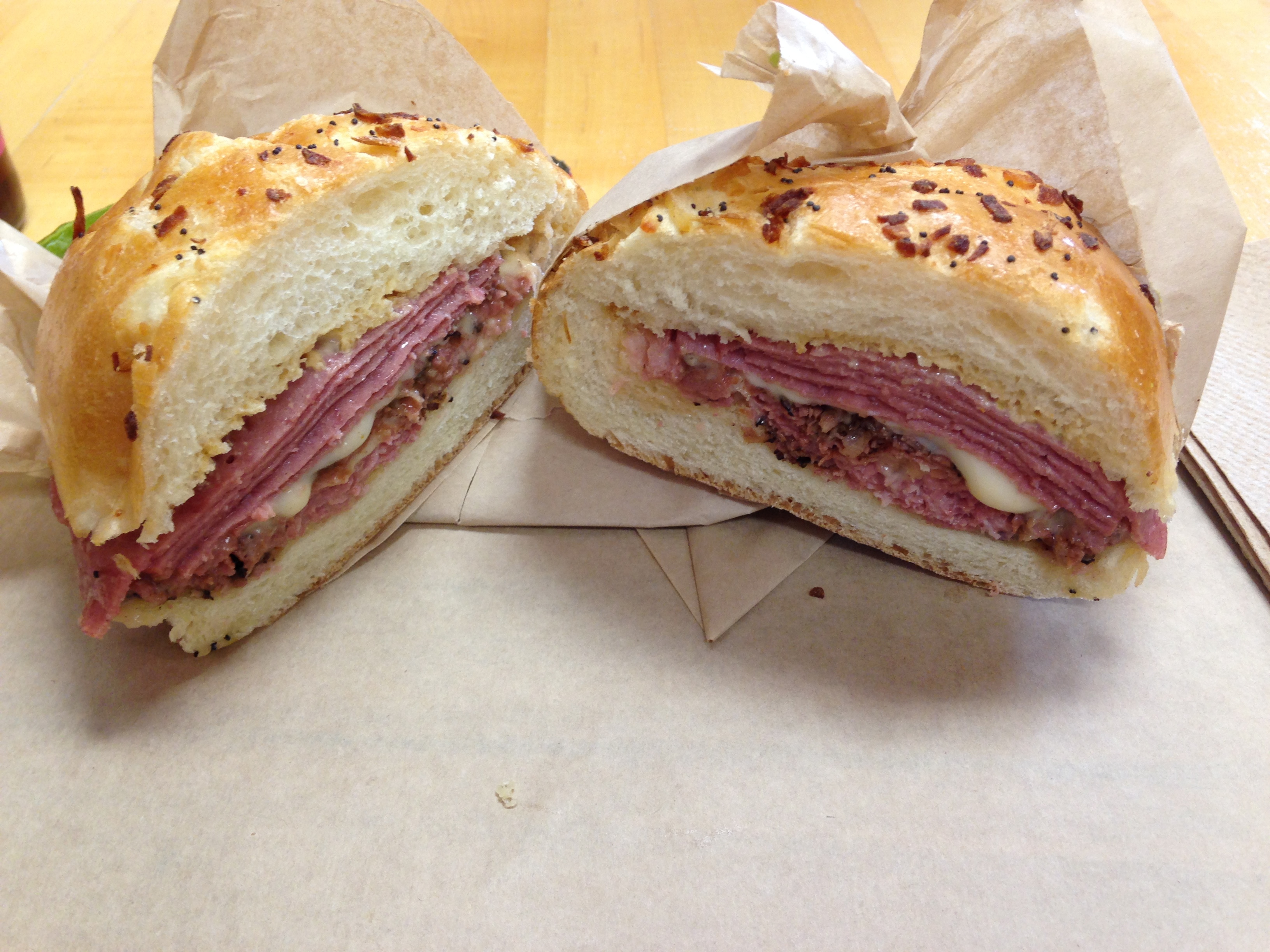 The Rye Project was a success. I split a sandwich made with salami, pastrami, corned beef on an onion roll. Good combination of flavors, but next time I’ll stick to a simpler sandwich on rye. 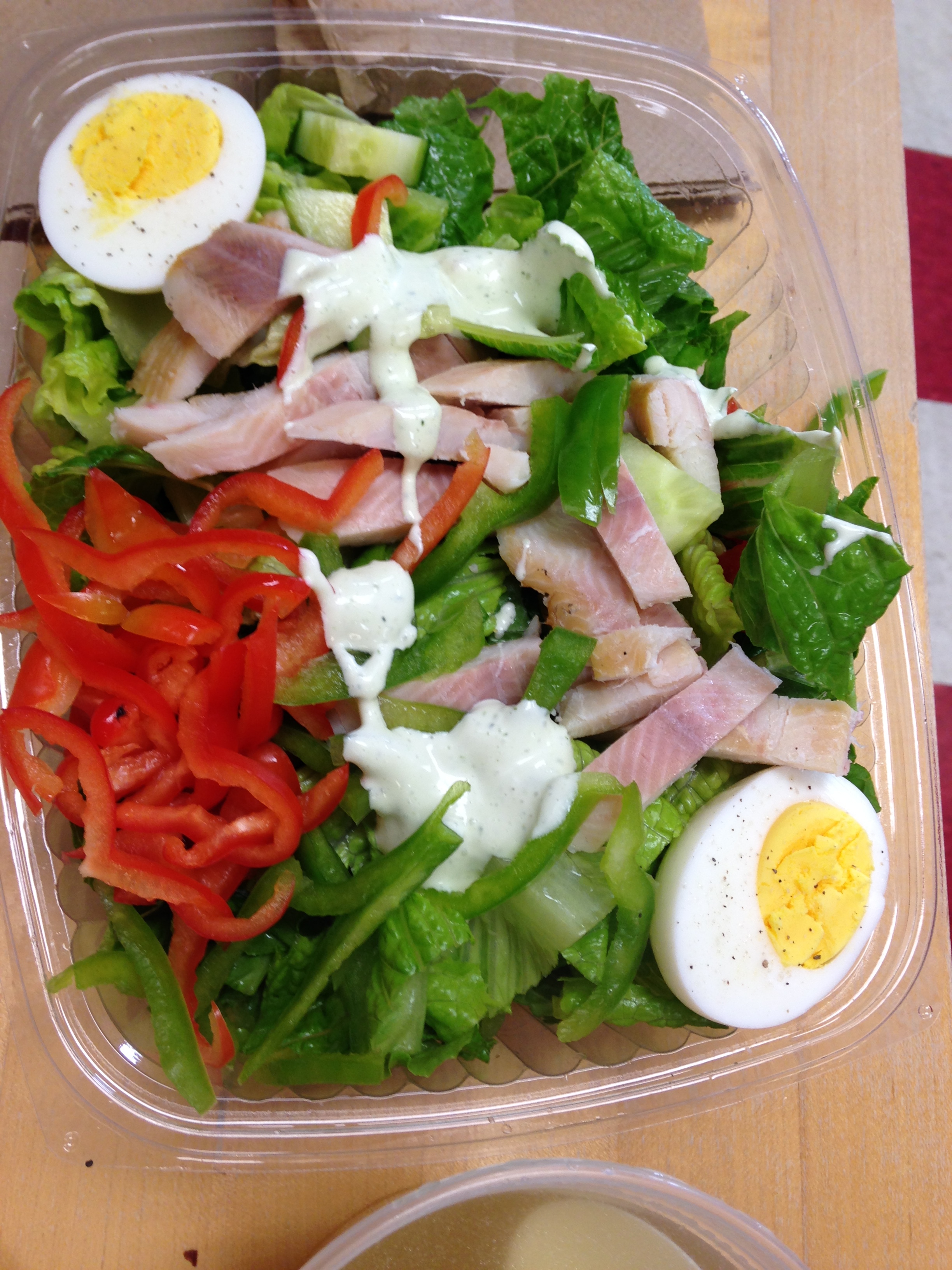 The smoked trout salad was great. The trout had a light smoke and was bouncy rather than dry. 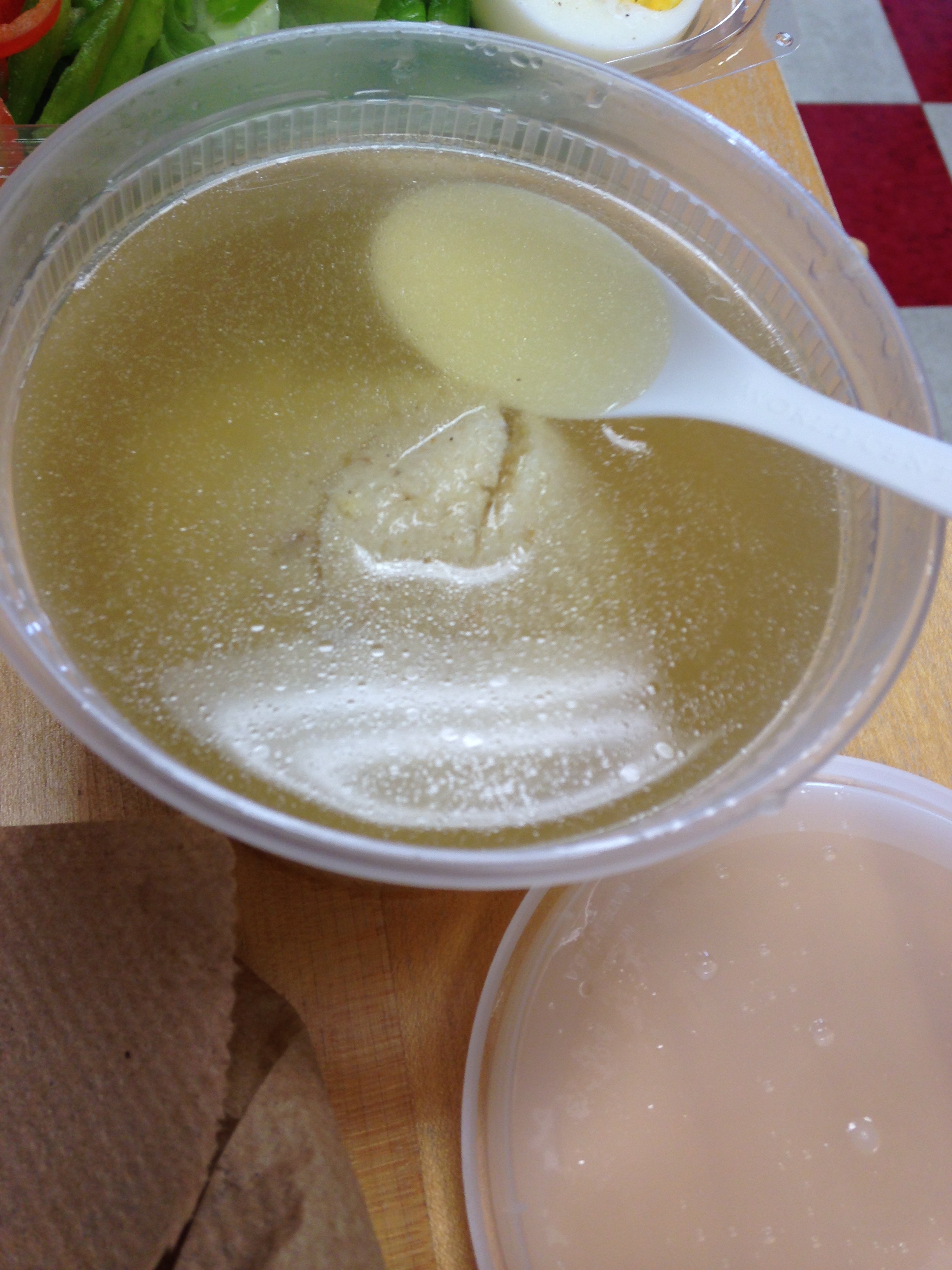 Matzoh ball soup was basic, and hit the same beats as my family’s— salty broth, one big matzoh ball. 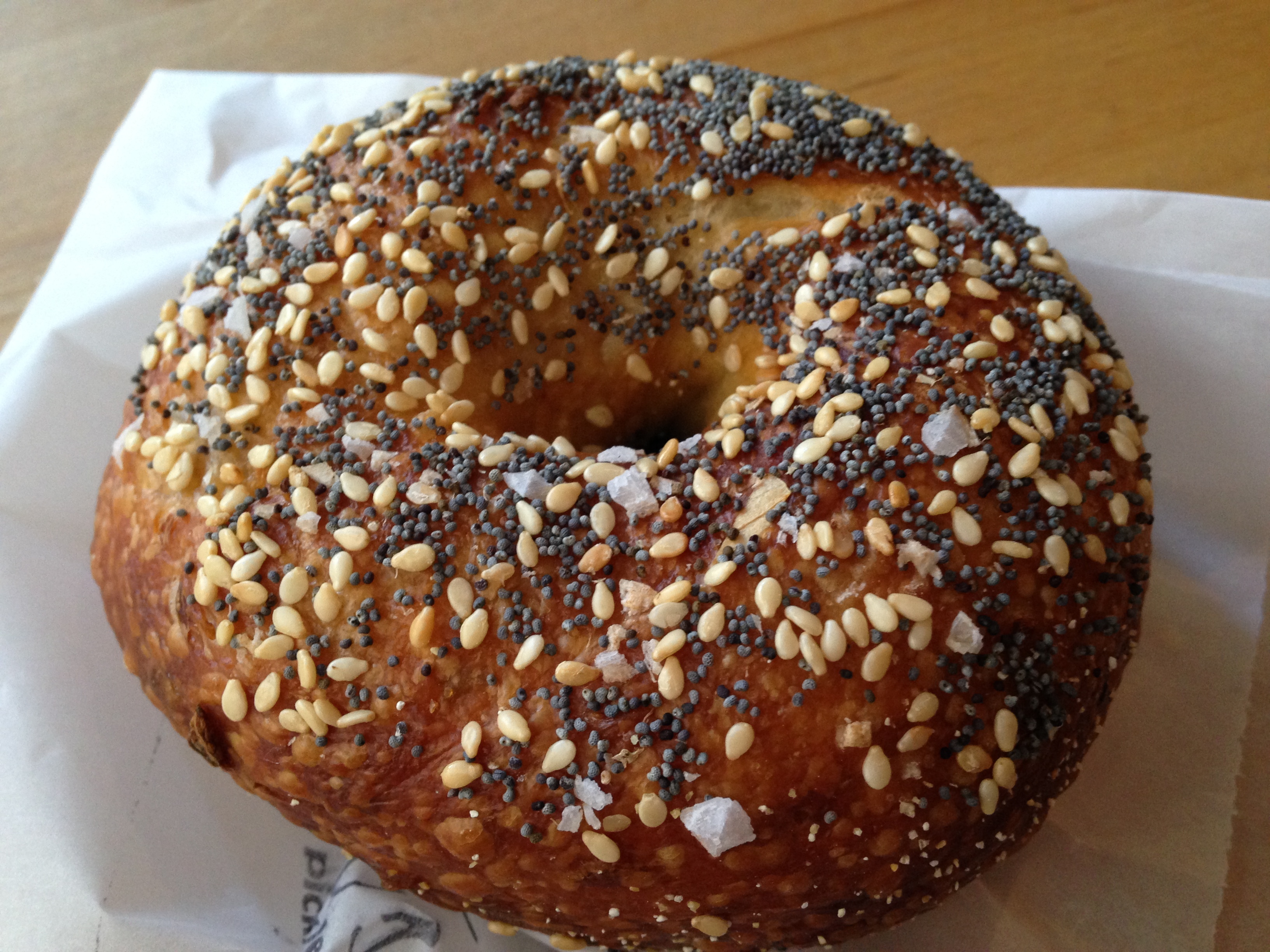 Shorty Goldstein’s bagels are house made and they finish baking at 7:30am. By 11:30, the bagels lost some of their charm but still good qualities like a thick crust, and dark brown blisters, the kind you get on a sourdough loaf. See http://www.jweekly.com/article/full/76432/hardly-strictly-bagels-shorty-goldsteins-stands-tall-with-new-housemade-bag/

I also had some banh mi:

Who is making your favorites? High end or low end, any new varieties worth seeking out? [image] I’m a big fan of the Huang Lan chain in the South Bay, and especially like that they make their own pate. The bread is from Bui Phong bakery. BTW, do any of their current locations make pork buns? I loved the ones I had 10+ years ago. [image] Mom’s Bun Mi in the tenderloin is a newcomer. They have fancier types like lemongrass beef and curry chicken, but I got their combo. The Bakers of Paris roll…

Saw Bette’s mentioned – very fond of it but been loving the Royal Cafe in Albany lately, even more. http://www.royalcafealbany.com/#eat-together

How is the fried chicken?

I’m ashamed to say, fried chicken fiend that I am, that I’ve not had it yet. Every time I go, I get seduced by hollandaise, or bacon, or chorizo, or SOMETHING and then I see it going by and…sad face. Last time, this guy at another table held up his plate and said to me, “Choose wisely.”

Pro-tip: their homemade muffins are sublime. Tender, buttery, not too sweet, like my mom’s. Whatever kind they’ve got, get a muffin.

Also: the huevos rancheros are a waste of time. Only thing I haven’t liked much.

I started eating here a few years ago and Anula does a hot plate lunch every weekday (meat or vegetarian). I posted about it on Chowhound and it has also been reviewed in East Bay Express.

Update: over the years Anula has added a few special items here and there. My favorite right now is her veggie chapati, stuffed with lentil and leafy green (kale?) for $2 each. Really great flavor, she makes it some days but doesnt make it other days. Another favorite is her jambalaya, offered the first Monday of the month. She serves the rice separate from the chicken/sausage/shrimp. It is spicy though, so bring extra rice. Each entree is served with two side dishes, such as lentils, eggplant, kale, beets. Both the lentils and eggplant are outstanding.

Berkeleyside writes about Rio California Cafe, a Brazilian place in downtown Oakland that fits your criteria. 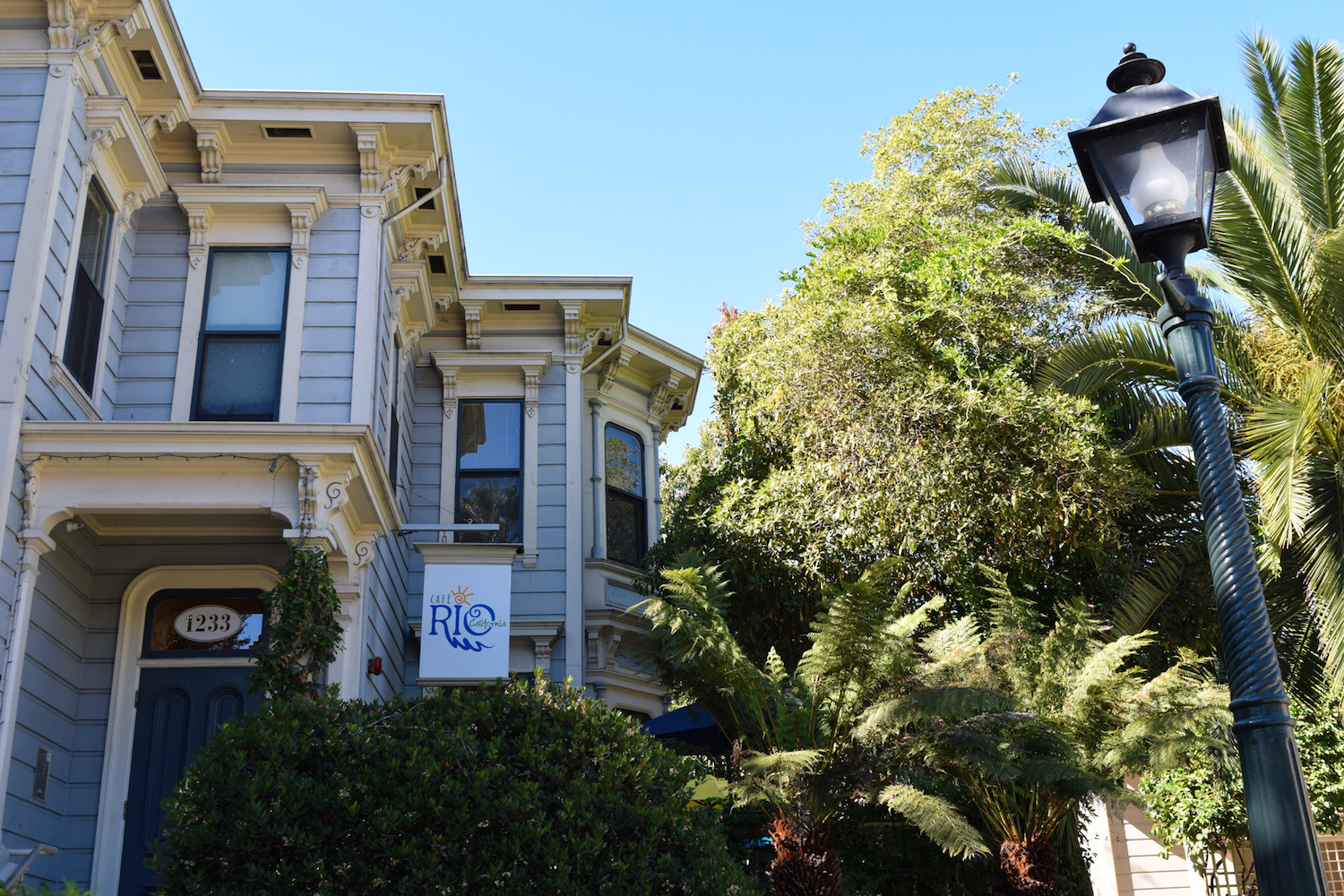 Tucked inside Oakland's historic Preservation Park is a hidden gem serving dishes from Brazil and beyond.

ETA: But the menu says that the Brazilian plates " are only made for 15 people or more each", while the Berkeleyside article doesn’t mention that.