I get Pollara about once a week, and they do heat it for me. I walk over to one of the park benches in an out of the way spot, or sit in my car, to enjoy it.

Thanks! That’s good to know. I have had it heated up for me several times before the latest lockdown. But their new “updated” website says that all takeout orders need to be reheated at home. This has kept me away, to my dismay. There are not many good pizzas in that area.

Market Hall Foods, right next door, has some of the best thin-crust slices around, not super-thin like Arinel or Gioya, but pretty good anyway. They will also heat the slices for takeout.

DamnFine, on Judah in Outer Sunset.

We got two pies, both recommended by the server. Both were good suggestions. We ate it straight out of their wood fired oven in the car. So its still hot and got good texture.

Allota Burrata, with prosciutto, argula with a tart dressing, mozzarella, slobs of buratta on top and red pepper flake. We liked this one quite a bit. The peppery arugula, the salty and savory prosciutto, the slightly hot flakes and the dressing plus the burrata worked very well together on a thin and fairly crunchy crust. 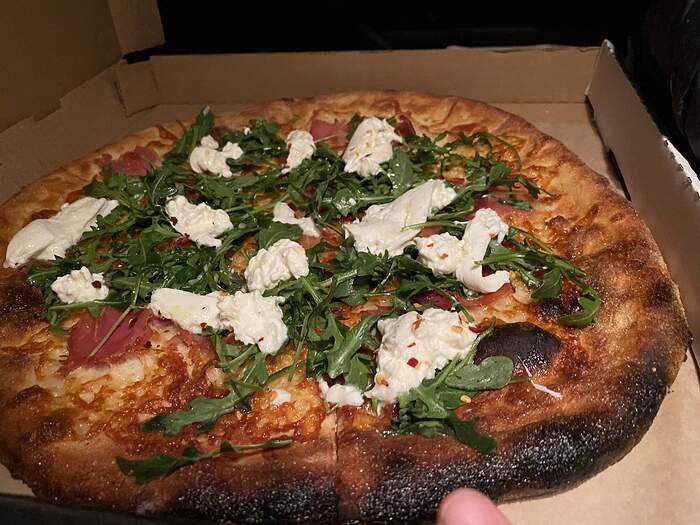 Pepperoni- tomato based pie with lots of small slices of slightly hot pepperoni, mozzarella and pecorino romano and slices of basil on a similar crust. We liked this one too though preferred the burrata one more. The kids enjoyed this one. 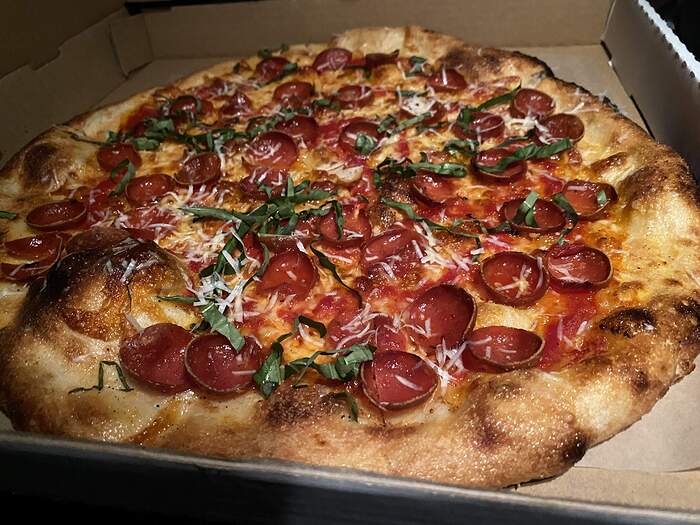 This shows the thickness of the pizza. The Eater article says Damnfine uses a three day fermented dough and that its supposedly easier to digest according to the owner. While I haven’t noticed anything different with my digestive tract afterwards, I did like their crust. 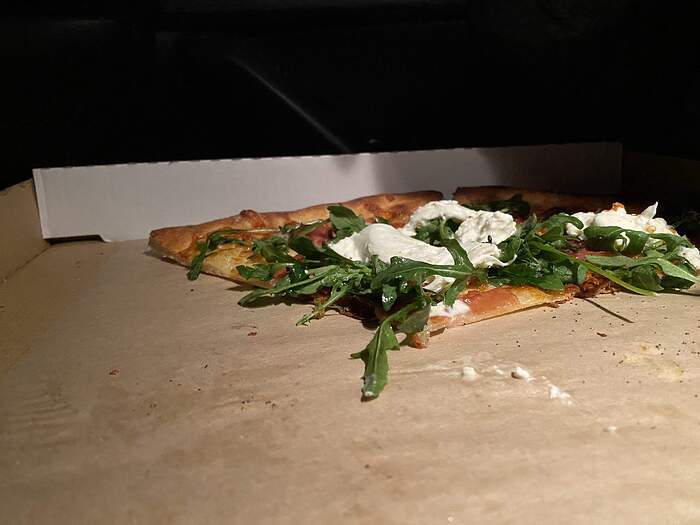 I don’t know pizzas in Outer Sunset well. But I suspect DamnFine will most likely take the crown for the best pizza in the neighborhood. And for sure one of the better ones in the city as well. Pretty damn fine indeed. 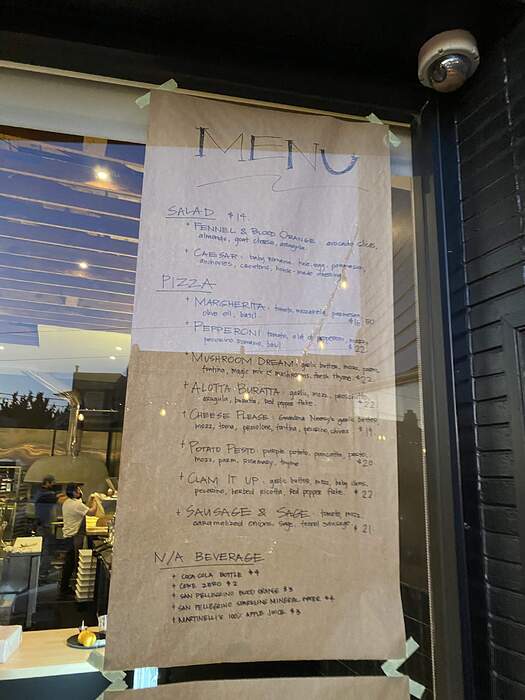 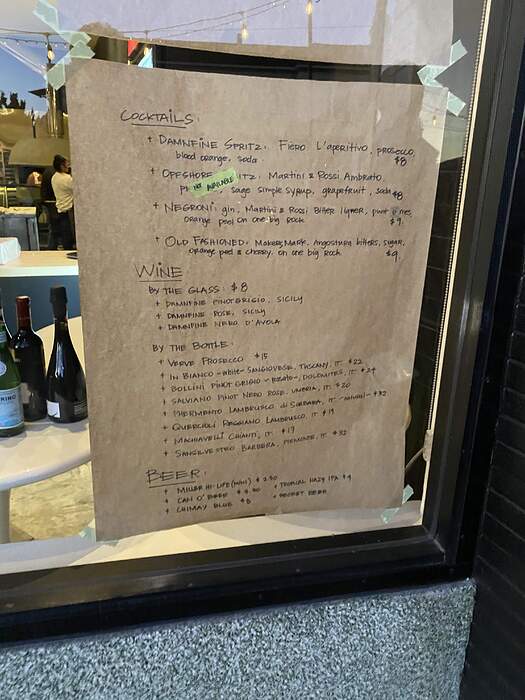 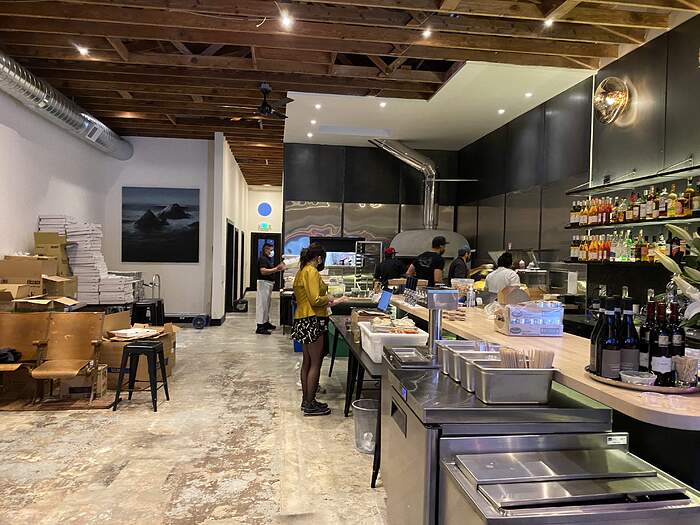 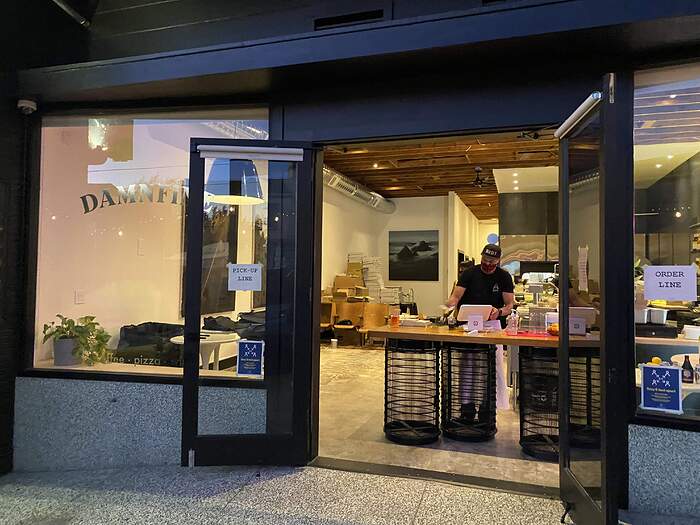 Thanks for the report, I gotta get out there and try that clam pie.
Are they sort of individual size pizzas for a hungry (er, glutonnous) adult?

I think they are pretty big. Maybe 14” across? Two adults two kids and we got two slices left over. Skip lunch! Oh yeah they are only open for dinner. 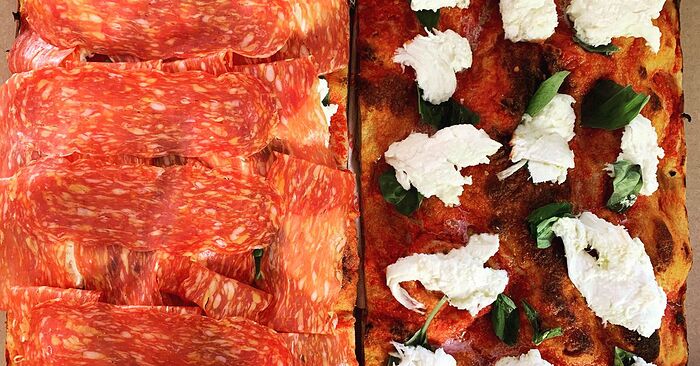 14 Great Pizzerias in the East Bay

A slice for every kind of pizza lover

Vesta is still on our short list, but they’ve got problems. They have one small oven and a huge following so lots of people are ordering togo and the kitchen gets waaaaay behind. We called them last night, and they made a point of saying they were an hour behind! The last time we successfully ordered from them, they were also an hour behind, and gave me a bottle of wine as an “im sorry” because I was standing out on the sidewalk for 45 minutes. I have hopes they will revive when the to-go calms down, but, you never know, right?

We get pizza from Howie’s quite a bit, I would say it’s probably our “usual”, being close to home, about the right size, and pleasant in every way. I have to put Napolitana back in rotation. I got one from Terun last week and it was meh. I keep having hopes for the Indian Pizza revolution hitting the peninsula because I’m a fan of Zante’s but the carbon copy in Palo Alto has suffered undue generation loss.

(Just to not make a new thread for a whole sentence: we ate in-person-outside at La Viga and it was pretty good, and Left Bank on valentine’s day. LB’s kitchen must have had some kind of fiasco because there were a bunch of tables that sat down 10 minutes after us, and were still on the soup course when we paid. They were doing a valentine’s day prix fixe so it shouldn’t have been that hard. Neither meal was worth writing home about.)

Damnfine, margherita and clam pies.
Love the crust, it skews Neapolitan but not too doughy, very chewy and nice hint of smoke from the wood oven. Margherita was great, clam was less successful. 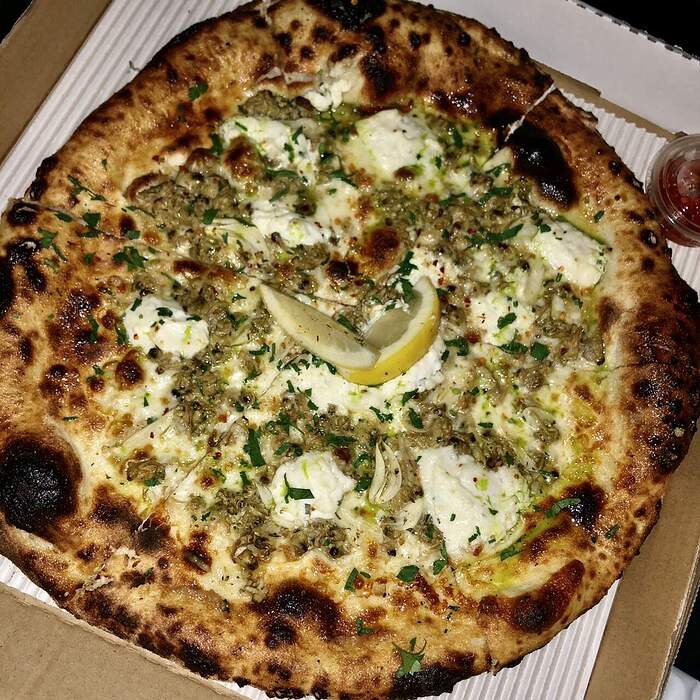 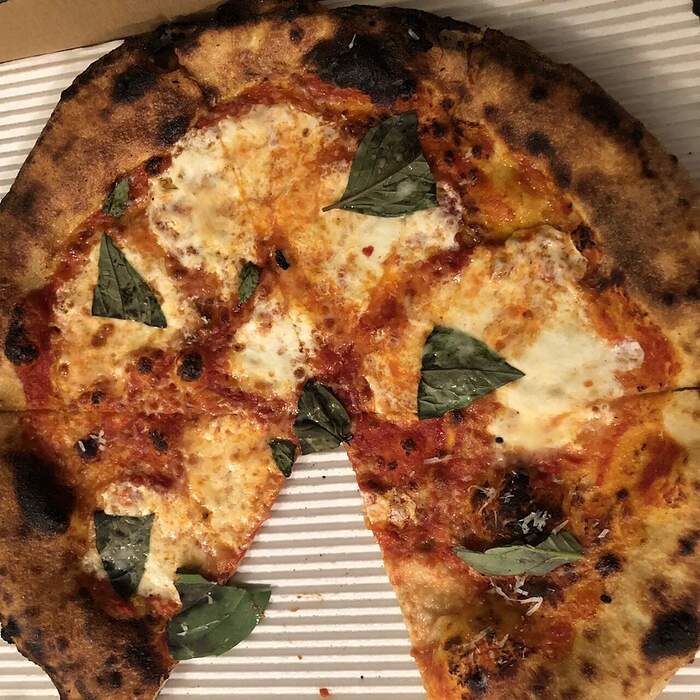 Flour + Water Pizzeria, Valencia St, SF. Margherita and Sausage pies.
Crust is light and airy, not chewy, but a little weighed down by the toppings and could use a little salt. Good, but not my favorite. They don’t have a unique crust like Pizza Hacker or Damnfine and the toppings quality and combinations aren’t really inspired like Gialina or Delfina. The busiest block of Valencia is currently a slow street during the pandemic, no cars allowed, and I gotta say it seems like it should be permanent. I’ve always bemoaned the lack of outdoor dining in SF and hopefully after the pandemic it will become more of a thing. 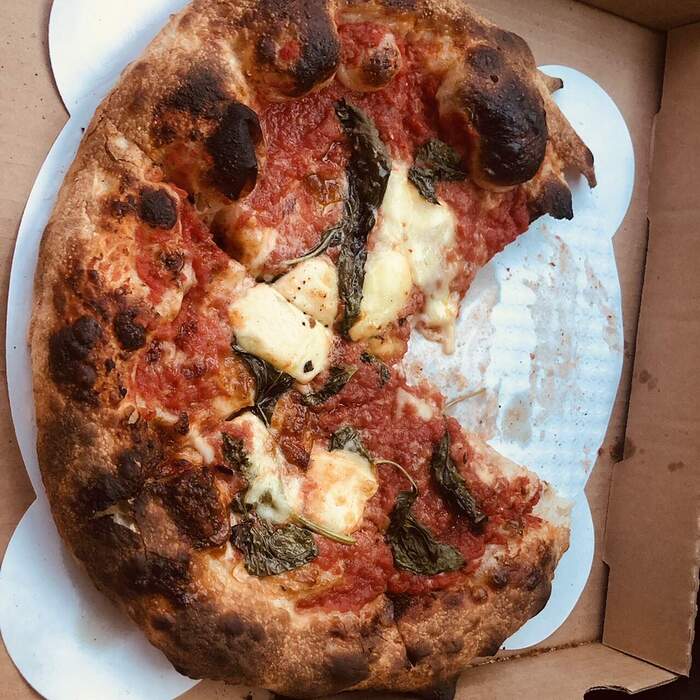 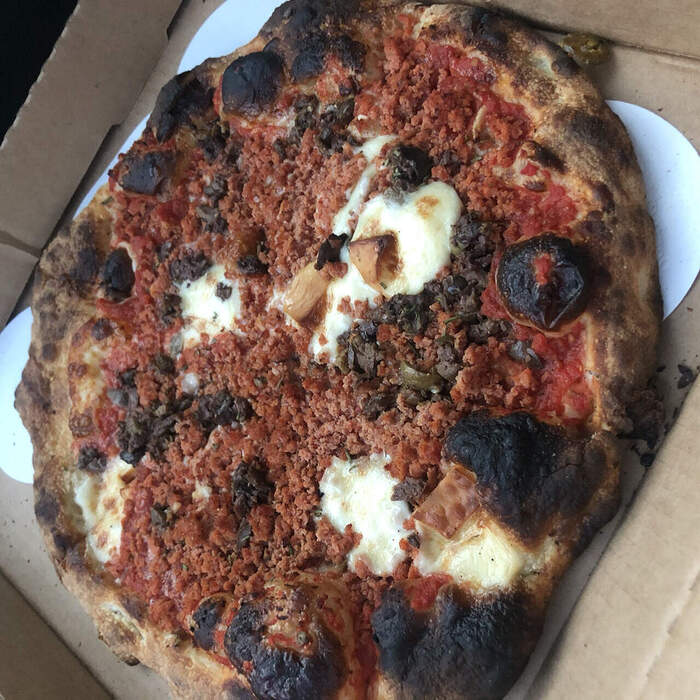 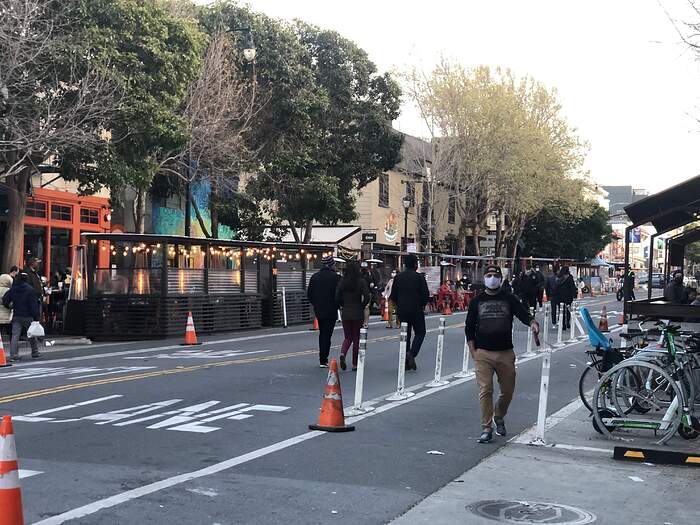 June’s Pizza, Oakland.
Newish pizza place in West Oakland. Wood oven, local seasonal ingredients, flour milled in Petaluma. Beautiful outdoor space in an industrial area hidden behind graffiti covered fences. They only have 2 pies daily, margherita and the special, and also have margherita slices. The margherita slices were excellent, fresh out of the oven with super fresh ingredients and beautiful crust over which they grate gran padano and pecorino over. Eat the crust. The special today was local squid with smoked jalapeños, tomato sauce and fennel, which sounded great, but I was in the area to pick up BBQ so just got slices.
The courtyard space has fresh herbs in raised beds, picnic tables, and is shared with Soba Ichi Japanese restaurant and Magnolia Mart - a small counter selling Japanese snacks, pastries and drinks. Recommended. 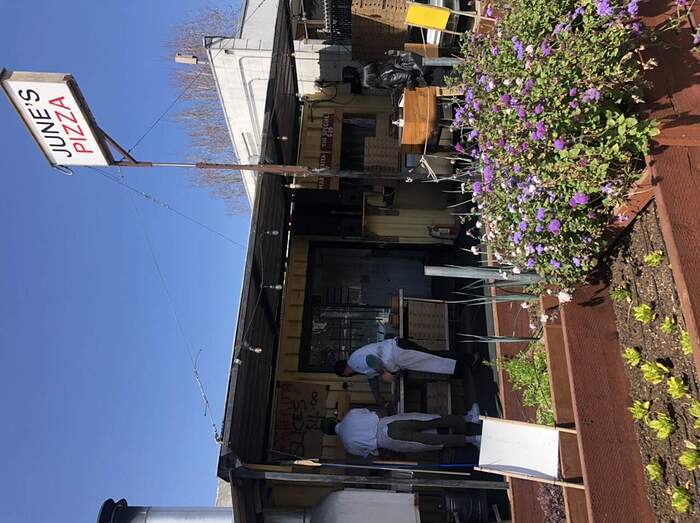 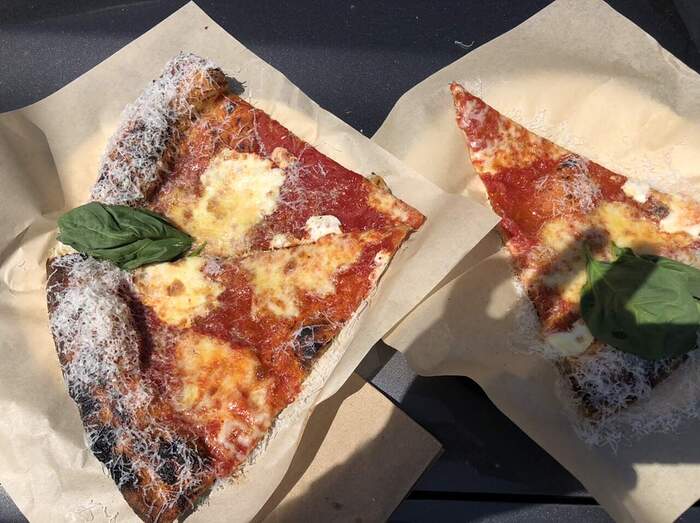 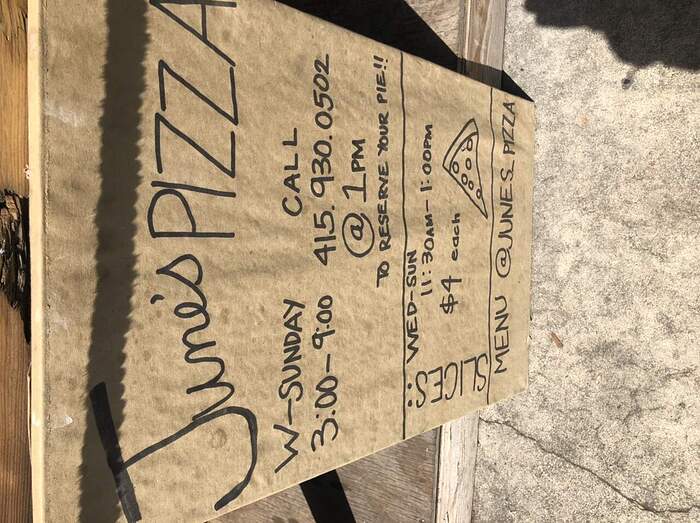 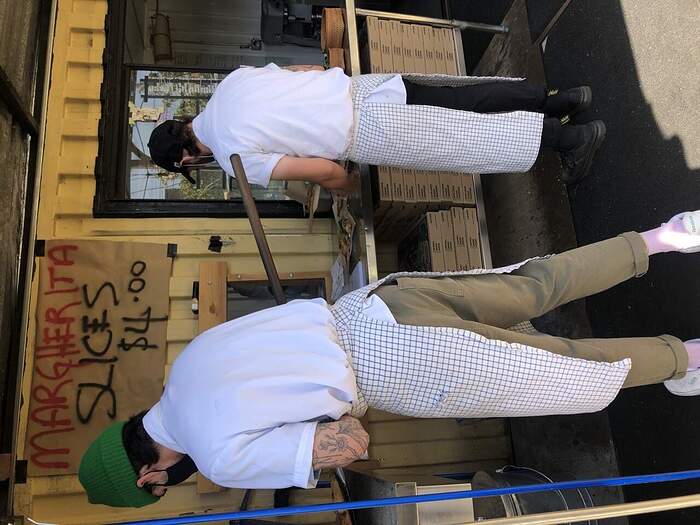 I’m in Boston so I have no strong opinion but that clam pizza looks pretty good. What was up with it?

Uh, I thought the herbed ricotta overwhelmed the clams and was unnecessary. also, they use Manila Clams which are common in the SF Bay Area as they raise them in locally in clam beds here, but they are super mild. I like them for other uses, but for pizza I think it has to be little necks because they have a much more pronounced briny profile and stand out better. [Notice I was careful to say briny, instead of “taste like the sea” after seeing the rancor that phrase causes in another thread]. 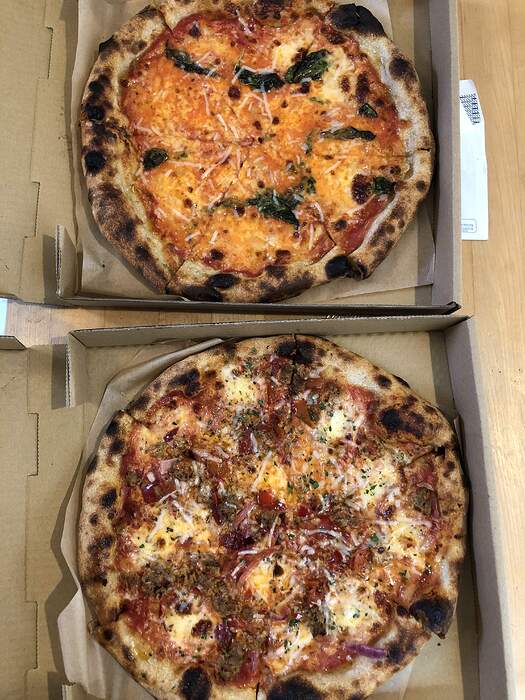 Great call! I had forgotten PizzaHacker. Our son’s go-to!