This is another in the series of topics about specific, common dishes around the Bay. I’m starting them because I tried searching for generic topics and couldn’t
find any, just inline mentions of pizza in various other topics. This should make searching easier.

I had a great margherita pizza at Zut! on Fourth Street in Berkeley. The crust was very thin, the sauce was fresh and light, and there was just enough cheese. I could have used a little more char on the crust, so I’ll probably order it “well done” next time.

On another day, I went downtown to try Luisa, a new Neapolitan place with a wood-burning oven. Oddly, they close for lunch at 2:00 and I was about five minutes too late.

So with an hour on my premium parking ticket, I hiked around the corner to another favorite, Arinel. Their pizza is like your average New York neighborhood pie, generous slices with a light sauce and not nearly as much cheese as on the slices at chain shops.

A few months ago, I got into a humorous argument with one of the owners who happened to be in the shop, when I saw that they’d started offering pineapple as a topping. Anathema for a New York pizza! What’s next, I said, ranch dressing? Never ranch! he said.

Arinell was my go-to place when I lived in Berkeley and was missing NY pizza. Kind of amazing that it’s still around 40 years later.

I will add my pizza observations around the South Bay.

My pick for the best of the lot: Napoletana Pizzeria in Mountain View. VPN certified. If Chef Kostas is baking, the pies are consistently great, save for some variances in salt. My favorites are Margherita/ Napoletana (Margherita with minced sausage) and del Cafone.

Next best ones for me is Vesta in Redwood City. Some may like this joint better for their more creative and less traditional take on pizzas.

Howie’s is ok, but they are real salty each time I eat there.

I got a Terun pie once (Palo Alto), severely undercooked. Perhaps other have better luck as the place seem to draw a crowd.

Doppio Zero on Castro, Mountain View. It was a while ago but I remember all facets of the pie- dough, toppings, overall fell short compared to Napoletana.

Cru, Redwood City. Roman pizza by the slice. Need much more customer flow since its been sitting around. Prefer Vesta’s significantly more.

I always seem to eat something else other than pizzas when I go somewhere else. Though I remember a good pie from Cotogna years ago.

I did make it to Lucia’s (not Luisa’s, as I thought) for lunch today. The margherita pizza looked great, with the characteristic soupy center brightened with a good dash of EVOO, light sauce and not too much cheese. But the crust was undercooked, to the point of being doughy at the edges. I mentioned this to the server, and the owner came right over and said I could ask for a more well-done crust next time. So, if you like a little char, ask in advance. Automatic service charge of, I think, 10%.

ETA: the place is on Shattuck in downtown Berkeley.

Wow, you can get pineapple as a topping at Arinell now? I like Arinell for NY style, usually just get a plain slice from their hole in the wall location in the Mission, and it’s probably the closest I’ve had to a NYC slice (with the caveat that I haven’t had that many slices of pizza in NYC).

Had a good pizza from Gialina in Glen Park, SF recently. The Atomica ($15), which has mozzarella, chili peppers, tomato sauce, and sliced portabello mushrooms. Added anchovies for an extra $2. Very good pizza at a reasonable price. Very thin inner crust that still held together, with a puffy cornicione that was crispy and airy, not too chewy. 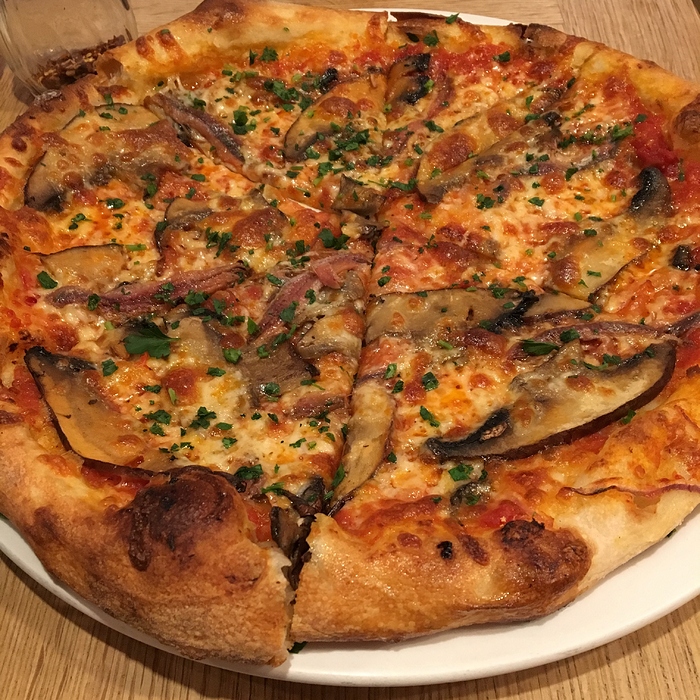 Gialina has a pizza named “Atomica”? Do they have one named “Souperman”?

My husband and I were die-hard Arinell fans for many years. Great thin crust with not too much sauce or cheese. In the last couple years, though, we’ve totally abandoned them for The Pizza Shop on 24th. Aside from the yucky Phish that always seems to be playing (“is this still the same song?”), their pizza is awesome. And they’re nice!

Unfortunately, i don’t try a lot of pizza places. We live next door to Serranos on 21st in the Mission, and while it’s not my drop-dead favorite pizza on earth, it fills the need. a few months ago, though, when we were out cocktailing, we did try Arinell’s on Valencia. loved it, loved the texture. i agree with Mr. Happy that it’s as close to NYC pizza as i’ve had here at a pizza joint that isn’t a restaurant. but i’m not very savvy about NYC pizza either.

In the past I’ve loved Tony’s Napoletana in North Beach. I was not a fan of Una Pizza Napoletana as i found it soggy/doughy in the middle.

has anyone tried Pizza Hacker? in the old Inka space on Mission near Bernal?

Gialina has a pizza named “Atomica”? Do they have one named “Souperman”?

They don’t to my knowledge. I wonder what toppings it would have if they did?

To tell the truth, I eat pizza about once per year (haven’t had my 2017 yet). However, nearly every day at breakfast I take a pita bread, slather on a teaspoon of Lao Gan Ma Spicy Chili Crisp sauce and some meltable cheese, and stick it under the broiler for 10 minutes. 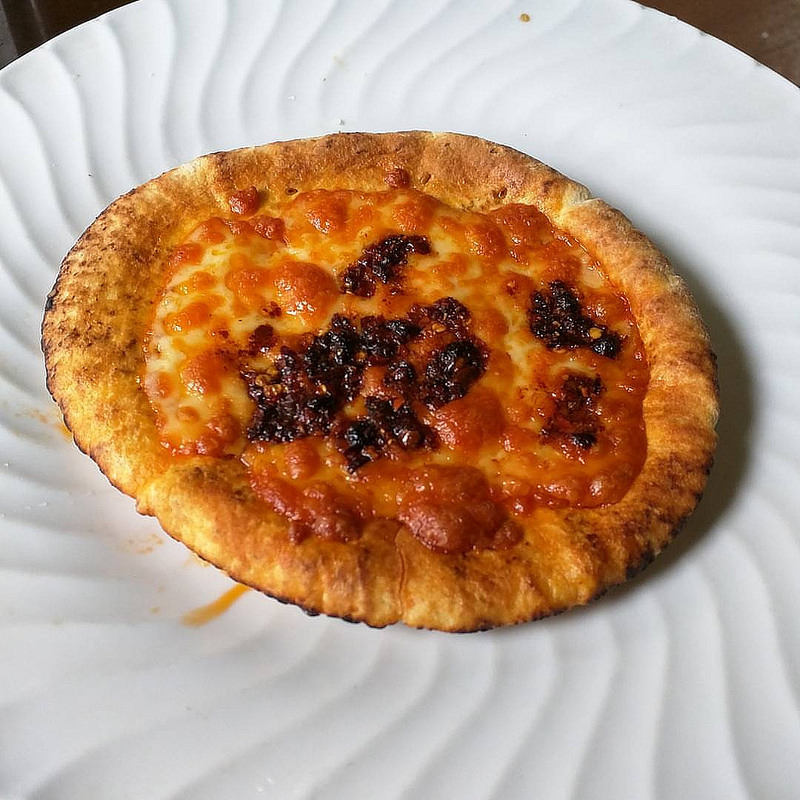 LOL, I saw your picture before reading your comment and was admiring the char on the outer crust

Has anyone tried the 10 inch wood fired Neapolitan pizza at Firepie on Cesar chavez in the mission? Or been to Josey Baker on since they started doing pizza every night of the week?

Is The Pizza Shop still cash only? Even Mission Pie had to give that up…

Wow. At $17 for a margherita pie, I would expect it to be perfect the first time!

I tried Pizza Hacker, I was not impressed with it. Recently tried Lanesplitter in Temescal and enjoyed that. Last SF pizza I enjoyed was at Ragazza, the sibling of Gialina in Nopa.

I’ve accepted that I’m an old fashioned Northeast pizza-eater: It has to have a certain cheese, salt, oil level to taste right and it can’t be a pain in the ass to get. After eating Gioia’s (good for a slice), Benchmark’s, Emilia’s, Pizziaolo (sp?), Bobby G’s, Paisan’s, Chez Panisse Cafe’s, Cheeseboard, Sliver, and god knows how many others, I’m going with Pizza Moda’s pepperoni, extra crispy. Sometimes a seasonal one, like the corn or the fig or the pear one. But it’s that salty kick that says “pizza” to me. I don’t like an overloaded pie but some of the others are keeping the toppings much more sparse than I expect, or the dough is like sourdough bread, or I have to wonder IF I will be able to get my pizza when I want to get it (not relaxing).

They do half-and-halfs, the crust is great, and they have parking. It’s supposed to be consistent and easy, and it is.

The one thing I haven’t tried but love to know more is Indian pizza, which seems to be a uniquely US food within the Indian community. Anyone tried those? How are they? And now Eater reports that Preeti Mistry will have a Indian Neapolitan pizza in her new place.