Cool. Sounds like a good plan thanks for the tip!

The spinach and mushroom one is really good too.

As a general rule I don’t like chicken on pizza, but Little Star’s deep dish Mediterranean Chicken is my favorite, with chicken, artichoke hearts, onions, feta, green olives and red bell pepper.

Gnawing on the crusts is as much a Chicago tradition as any other city. Ideally, of course, it should be good enough to finish on its own, but we don’t stand on too much ceremony. Eat your pizza how you want. Dip away.

Nearly half an inch of sausage then pepperoni on top of that crust for the whole surface area doesn’t hurt its chances. More generous with the tomato than say malnati. Check it out if you have a craving.

Just to be clear, I was using the Caesar dressing not so much because the pizza was sub-par, but more because the dressing is that addictive.

Although I will say, I do think the crust is a bit too dense for my liking, but that’s neither here nor there.

a bit too dense

We had a work lunch at the new Square Pie Guys at Ghirardelli Square. Not a great fan of the thick crust styles in general, especially when there’s tons of cheese, but if you like Detroit-style pizza the quality is very good. A bit frou-frou, though–one of my colleagues couldn’t get a Diet Coke to drink.

I had Square Pie Guys Saturday night (Mission St.), second time I’ve had it. It’s good but I prefer Cellarmaker House of Pizza’s Detroit style more.
We wanted to go to Montesacro Pinsa but they were jammed. 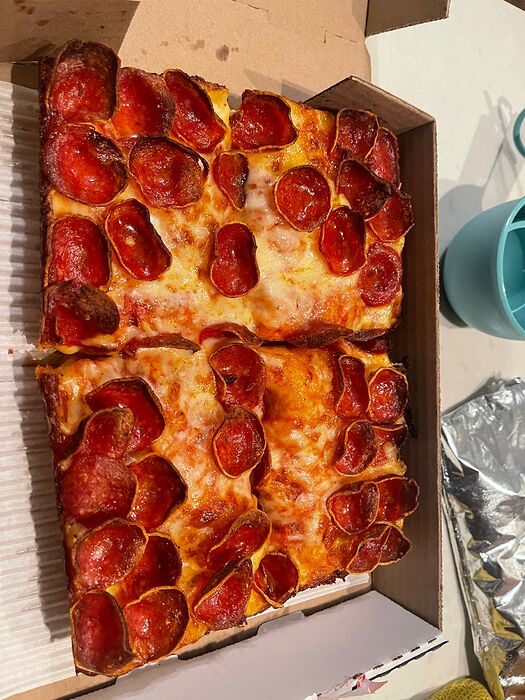 This is about as San Francisco as it gets. Both the pizza and the joint are decorated in the fantastical art of local artist Jeremy...

“described the joint as having a pleasant herbal flavor”

better not be fucking oregano!

Ha ha - probably sprinkled in there for a better pairing.

ha! I like this approach better tho than ruining a pizza (and the weed) by baking it together. Tony’s makes good stuff. Good for them.